In the years just prior to the outbreak of the Civil War, elegant mansions rose along Fifth Avenue north of 23rd Street.  Madison Square had been officially completed on May 10, 1847 and quickly high-end homes began surrounding the park.  On August 23, 1859 developer Amos Eno opened his lavish Fifth Avenue Hotel at the northwest corner of Fifth Avenue and 23rd Street.

About this same time Phillips Phoenix had his wide, two-story private stable constructed directly behind the hotel at No. 6 West 24th Street.  Wealthy and a touch flamboyant, Phoenix was well-known in society.  His keen ability to sense financial opportunity and his willingness to adapt would serve him well as the exclusive residential neighborhood was taken over by commercial interests following the war.

By 1879 23rd Street was seeing the first hints of the entertainment district which would transform it by the end of the century.  That year Phillips Phoenix joined with Amos Eno to erect the Madison Square Theatre at No. 4 West 24th Street, abutting the stable.  He also commissioned the architectural firm of Kimball & Wisedell to convert the stable, adding a third story.  Instead of horses and carriages, the building now housed theater offices and dressing rooms for the thespians.  One year later the architects obliterated the utilitarian roots of the structure by designing a commercial façade.

Sharing space in the 25-foot wide building, at least for one year in 1882, was the publishing firm of G. P. Putnam & Sons.   In the meantime, Phillips Phoenix enjoyed his wealth and social status, maintaining a country home in Tuxedo.   It was there on December 3, 1886 that Phoenix took possession of his new 31-foot ice yacht “to be used this Winter on Tuxedo Lake,” reported The New York Times.

Built in Poughkeepsie by ice yacht builder Jacob Buckhout, it was constructed of oak and mahogany with spruce spars.  The Times deemed it “one of the handsomest yachts ever sent out of Mr. Buckhout’s shop.”

Starting around 1891 the Madison Square Theatre was operated by playwright Charles H. Hoyt and manager Frank McKee, known professionally as Hoyt & McKee.  In January 1894 the pair happily announced “that they have succeeded in renewing their lease of the Madison Square Theatre for a term of nine years, beginning the 1st of October.  From that time the theatre will be leased directly from the owners, Amos R. Eno and Phillips Phoenix.”
Charles Hoyt told reporters “The theatre will be kept open until the 1st of October.  The theatre will be closed for a thorough overhauling.  I shall spend a large amount of money in refitting it.  I expect to make it as handsome as any theatre in New-York.”

Hoyt’s plans hit a snag, though.  Two months later The New York Times announced “Hoyt and McKee have decided to close their season at the Madison Square Theatre March 31.”  Hoyt’s hit A Trip to Chinatown had already run for 700 performances and the house was still packed.  But the duo could make more money putting the show on the road than keeping it in New York.  And they did not yet have a “proper class of attraction” to replace it.

“This will be the first time the pretty little theatre has been closed to the Hoyt plays since Hoyt and Thomas assumed the management,” noted The Times on March 19, 1894.

Within only a few years the theater district would move northward to Longacre Square, later renamed Times Square.    The Madison Square Theatre hung on; but as early as 1903 was renting space to at least one small business, S. B. Goodale & Son real estate, in No. 6 West 24th Street.  In 1906 Walter N. Lawrence ran the theater and that year he paid the $500 fee for a one-year amusement license.  The license covered both No. 4 and No. 6 West 24th Street.

But the days of light theater here were quickly drawing to an end.   In 1909 the aging Phillip Phoenix, always willing to adapt to changing times and neighborhoods, commissioned the well-known architects Maynicke & Franke to renovate No. 6 into a restaurant with an apartment on the top floor.

Brick side piers with recessed panels rose to a deeply overhanging cornice supported by truss-like brackets.  They embraced a cast metal façade enhanced by plain, geometric recessed panels.  The openings, three to a floor, were nearly floor-to-ceiling and flooded both the upstairs apartment and the second floor dining room with daylight.  Two snarling lion heads originally upheld a marquee or canopy that sheltered patrons from direct sunlight or bad weather.

William H. Lubold’s restaurant took over the two lower floors.  Variously listed as “Lubold’s Café & Restaurant” and “Barbers Café & Grill” over the years, it was a favorite luncheon destination for the businessmen now working in the bustling Madison Square neighborhood.

The second floor dining room was rented out for special parties and groups.  One of these was the Lumbermen’s Club.  The club called itself “strictly a dining and social organization.”  Dues were $50 a year for New Yorkers and $20 for non-residents--rather steep $100 per month expense for the city dwellers by today’s standards.  Although supposedly social, officers admitted that the club helped men in the lumber industry “meet and transact business.”

Although the Lumbermen’s Club moved to the nearby Hoffman House Hotel a year later, other organizations made ample use of the dining room in Lubold’s.   On March 16, 1918 the New-York Tribune reported on the first anniversary celebration of the Erie Club held here.

Founded in 1917 out of a rather odd concept, it was formed “by New Yorkers who came here from that bustling little Pennsylvania city,” explained the Tribune.   “The club meets on the first Saturday of each month.  The next meeting is to be known as ‘Ladies Night,’ and the club wants as many Erie girls as it can locate to be present.” 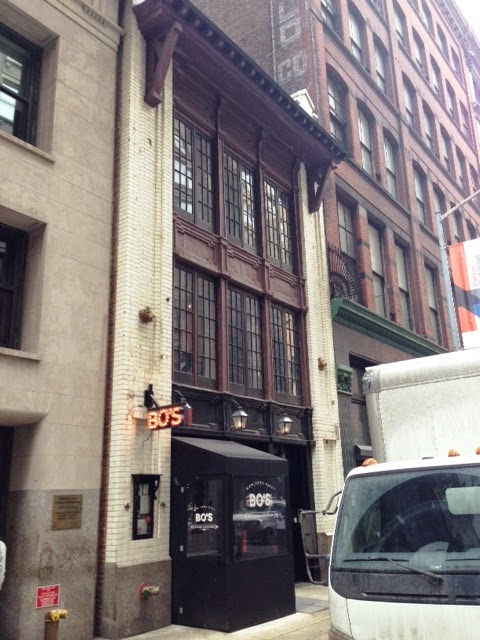 William Lubold died in July 1920 “quite suddenly…from diabetes.”  His obituary noted “The restaurant was patronized quite extensively by members of the trade in the Fifth Avenue Building and that vicinity, all of whom will regret to learn of Bill Lubold’s passing.”  The article mentioned that the business would be continued by Lubold’s sons, Howard and Wilbur.

The remarkable little building continue to house a restaurant on the first floor throughout the rest of the century.  In the 1970s the two upper floors were used as a photo studio.   A some point the street level was obliterated through misguided modernization. 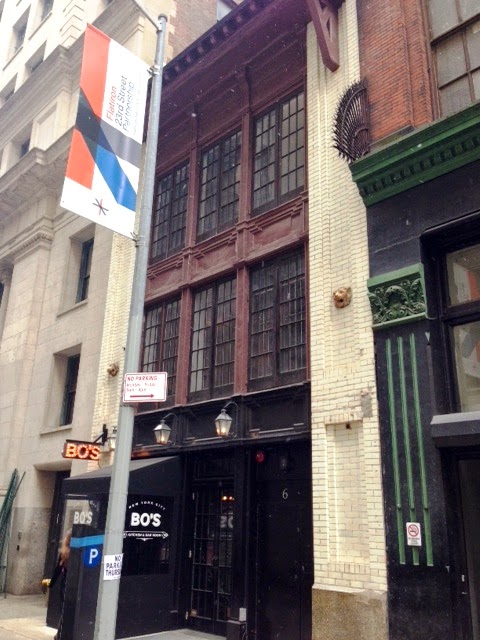 Somewhat surprisingly, a 2013 renovation resulted in the sympathetic reconstruction of the lost architectural details of the first floor.   A restaurant continues to operate here.  The Arts & Crafts building with its long and varied past, nearly lost among the tall loft buildings on the block, is a delightful architectural surprise.

Email ThisBlogThis!Share to TwitterShare to FacebookShare to Pinterest
Labels: arts and crafts, craftsman architecture, kimball and wisedell, maynicke and franke