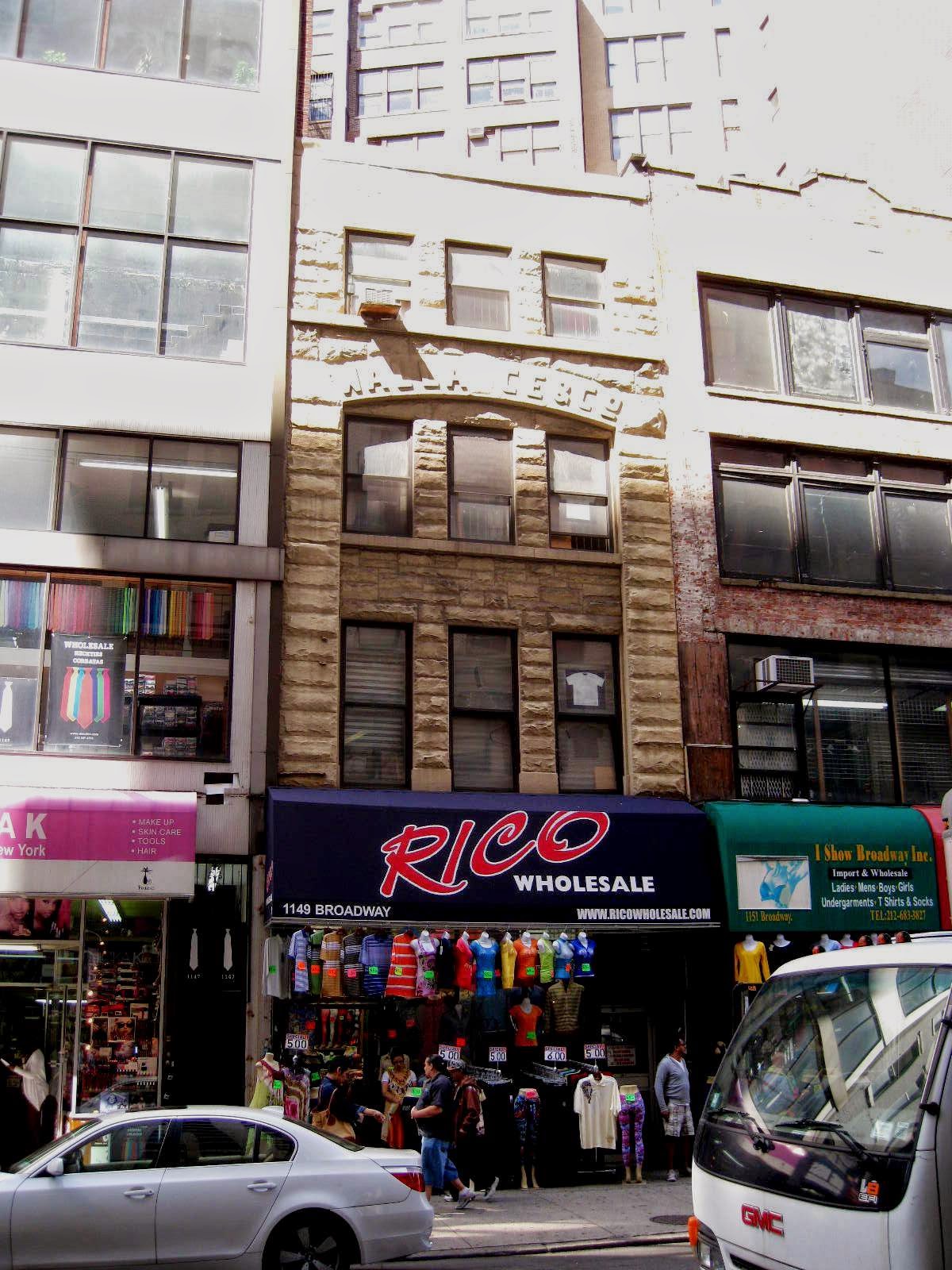 Like so many of the homes along Broadway around Madison Square, the brick-faced house at No. 1149 had been converted for business by 1872.   By now theaters and hotels were elbowing their way into the neighborhood and residents one-by-one moved away.  No. 1149 was occupied by Ridley & Co., a candy firm which had grown to several hundred stores throughout the United States and between 25 and 30 in New York City alone.

Ridley & Co. was founded in 1806 at No. 1 Hudson Street, which it still occupied.  The Great Industries of the United States mentioned in 1872 that in addition to its “up-town manufactory at No. 1149 Broadway” the firm had opened up “another larger sales-room” there.

The reader could imagine the Victorian girls and boys who pressed their faces against the shop window at No. 1149.  “Candy is manufactured into rock, sticks, bars, lumps, braids, crystallized, plums, kisses, comfits, drops, lozenges, nonpareils, and broken candy.  All these are manufactured of all combinations, flavors, and colors, and they are put in boxes, parcels, and cornets.  The article assured its readers that Ridley & Co. provided only untainted sweets.  “Thus, for instance, the firm will not deal in what are called ‘bandy-balls,’ ‘cordial drops,’ nor any of the kinds of candy which contain alcoholic fluids, nor will they deal in the gambling stuff known as ‘prize candies.’”

Rather oddly, the writer added  “As befits the truly honorable merchant, they will not trade either upon the bodies or the souls of men.”

The candy store and factory was gone by 1881 when P. C. Smith sold “office furniture” from the building.  But his tenancy would not last particularly long.   The owner, Solomon Loeb, was receiving an annual rent of $5,000 from his various tenants in 1885.  He found a way to increase that amount by a full 50%.

Solomon Loeb issued a 10-year lease to another candy making firm, Wallace & Co. in February 1885.  The confectionery company agreed to pay Loeb $7,500--about $187,000 today.  Loeb’s deal with Wallace & Co. apparently included some upgrading of the premises.  On March 13, 1886 the Real Estate Record & Builders’ Guide noted that he had commissioned architects De Lemos & Cordes to make over the old house.  Included were a four-story extension and an extension “for stairs,” an entirely new façade and “internal alterations.”  The cost of the renovations was $10,000.

What resulted was a Romanesque-inspired façade of rough-cut limestone.  Most likely to save costs, the rectangular residential openings were retained, rather than being replaced with the arched windows one would expect from the style.  Above the third floor the candy company’s name was carved in large capital letters—WALLACE being interrupted by an applied keystone between the A and C.

After Loeb had spent the equivalent of a quarter of a million dollars updating his building and branding it with the name of his tenant; Wallace & Co. was gone within three years.  In 1889 he leased the building to the esteemed art publishers Fishel, Adler & Schwartz for just over 10 years.  The rent started out at $7,500, the same as Wallace was paying; then jumped slightly to $8,000.

If the firm intended to open a print and book gallery here, the plan fell through.  On January 12, 1892 Fishel, Adler & Schwartz leased the building to Nathan Michaels.  The seven-year lease was “at an annual rent of $8,500, payable monthly, in advance.”

It would seem that the uppermost floor was rented to roomers.  On April 27, 1893 an advertisement appeared in The Evening World.  The writer, using the Broadway address, had apparently tired of finding his own meals.  “A gentleman desires good board; 9 o’clock breakfast, 6 o’clock dinner; state terms.  Near Broadway and 27th st.”

On August 16, 1895 Nathan Michaels broke his lease and left the building.  It was the beginning of a years-long legal battle between him and Fishel, Adler & Schwartz.  He fought to get back the water bill he had paid in advance through 1897; the landlord wanted rent due on the broken lease.

Fischel, Adler & Schwartz were, perhaps, a bit greedy; for they rented the building to Benjamin W. Singer for $8,000.  In 1896 he listed himself as a dealer in “saloon and restaurant fixtures” and, indeed, he probably operated a retail business upstairs, as Annie Michaels had done.   The street level retail space, on the other hand, was where Singer was making his money.

He opened a saloon here.  By now the area around No. 1149 was filled with businesses and hotels.  Singer’s location was ideal for catering to the many out-of-town businessmen who rushed along Broadway.

An iconic marketing ploy used by saloon owners since the 1870s was the free lunch.  Men dropping in for a beer or a whisky around noon could enjoy lunch on the house.  The food cost the proprietors more than they received from the single drink; but they gambled on the fact that most patrons would purchase several more.  Free lunches in some of the more elaborate saloons were extravagant—including dishes like oyster soup, beef or mutton, stewed vegetables, and bread and butter.  Benjamin Singer’s fare was understandably less impressive.

Trouble came on March 23, 1896 when the Raines Law was passed.  Prompted by Temperance leaders, its purpose was to curb drinking.  The Raines Law not only prohibited the sale of liquor on Sunday, but along with other restrictions it put a stop to the free lunch.  And less than two weeks after the law was passed, a plain clothed agent, Detective McVea, sat in Singer’s saloon quietly watching.

On April 1, 1896 23-year old bartender Benjamin Bassett served a customer a glass of beer.  Along with the drink he sat a small sandwich on the bar.  “Bassett was immediately taken to Jefferson Market Court,” reported The Sun the next day.  The newspaper called it a “test case” and said that “the first arrest under the Raines law in the Tenderloin district…was evidently prearranged.”

Young Benjamin Bassett was held at a staggering bail of $1,000.  Detective McVea requested the court to issue a warrant for Benjamin Singer, as well.  His request was denied.  The bartender sat in jail awaiting his appearance in Supreme Court.  The Sun simply said “Bartender Bassett was not bailed.”

The chunky-faced building with someone else’s name on it saw a relatively rapid turn-over in tenants.  W. W. Harrison Co. was here at the turn of the century until 1911, when it moved to 34th Street and 5th Avenue.  The firm manufactured riding crops and “umbrellas and walking sticks of the better sort.”

In 1912 potential automobile buyers could stop by No. 1149 to look at the new models offered by De Dion-Bouton Motorette Company.  In 1901 the French car company had opened a Brooklyn factory, under license.  Already the largest auto manufacturer in the world, its United States operation would be somewhat scaled back.  American buyers could choose between a two-seater vis-à-vis (in which the passengers sat facing one another), or a closed coach.  The American-made engines were 3.5 horse power. 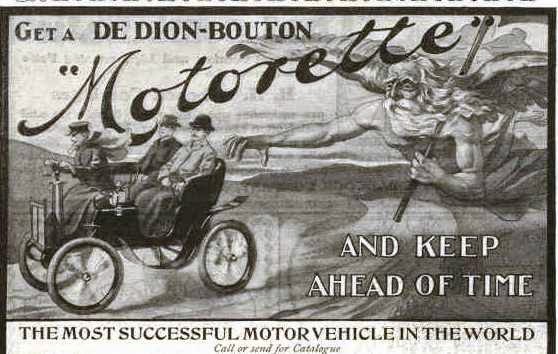 De Dion-Bouton was gone by 1916 when building owner Max Schwartz leased the store to Simon Tarbes.  He was the proprietor of the Independent Cravat Stores.  Upstairs, Leonidas N. Stellakis was publishing Campana, a Greek-language humor publication issued “fortnightly.”

Throughout the following decades the building would be home to a Thom Mcan shoe store in the early 1920s; Harvey Clothes, Inc. in 1926; and Marcus Greenberg’s leather goods and trunks operation in the 1930s.

The 20th century was not particularly kind to either the neighborhood or No. 1149.  By the 1970s, when Photographics Unlimited held photography classes here and a sandwich shop operated out of the street level store; the hefty cornice had been lost and the third floor keystone had dropped off.  Today a garish wholesale apparel company operates from the first floor where Wallace & Co. sold bon bons and Benjamin Singer purveyed whisky. 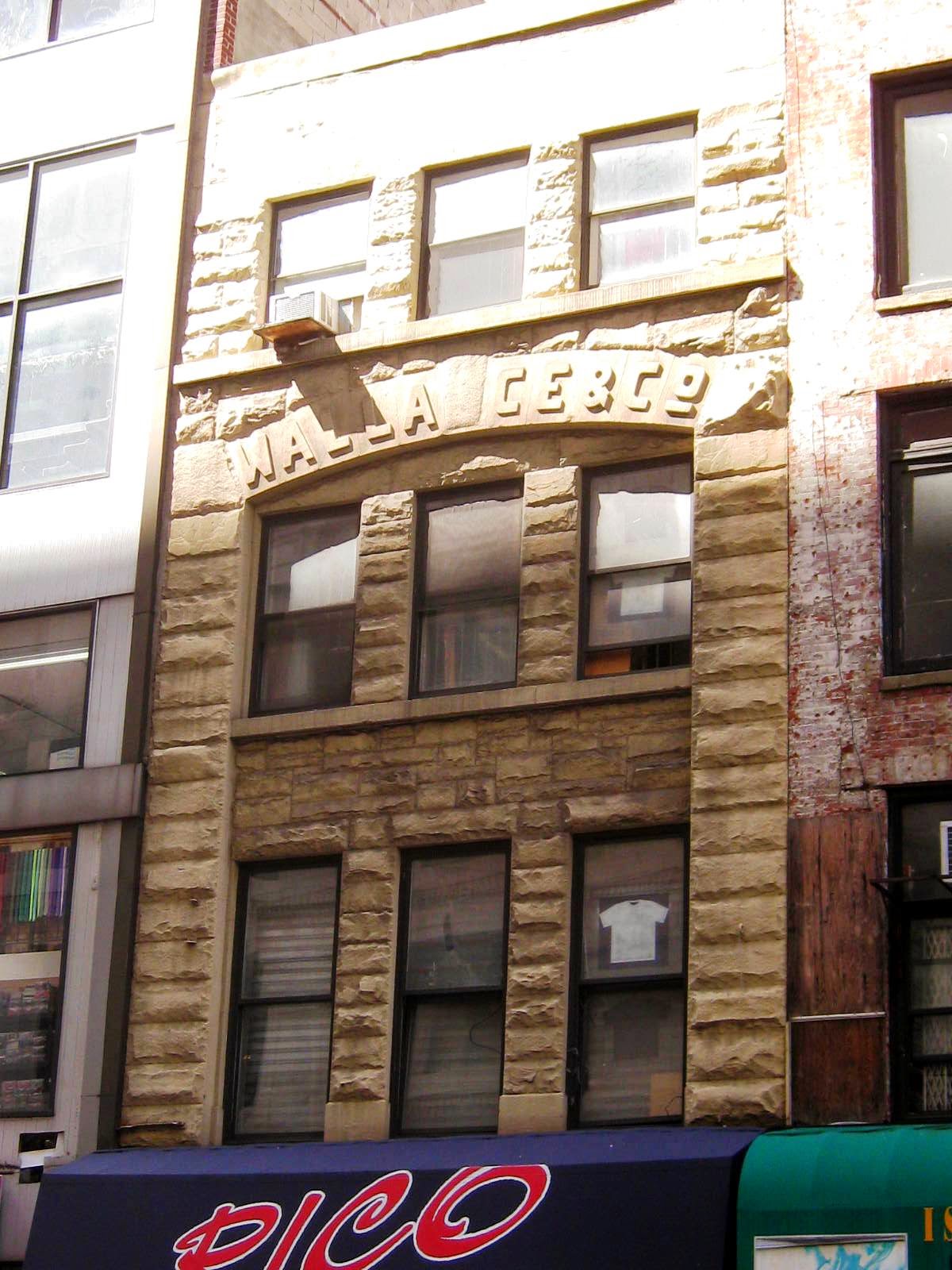 But the stocky limestone façade created by one of Manhattan’s most esteemed architectural firms, for the most part, survives.  And the carved name that Solomon Loeb no doubt regretted mystifies passersby who happen to glance up.