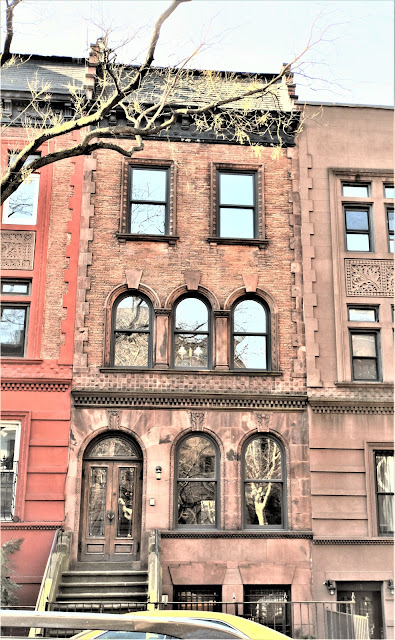 W. P. Anderson was both a builder and architect, responsible for structures like the 1881 H. H. Hunnewell Building on Beaver Street.  In 1890 he added "developer" to his resume by erecting a long row of high-stooped houses along the south side of West 94th Street, between Columbus and Amsterdam Avenues.  A mixture of the Renaissance Revival and Queen Anne styles, each was just 18-feet wide and rose three stories above an English basement.
Among them was No. 154.  The basement and parlor levels were faced in planar brownstone, while the upper floors were clad in rough-faced beige brick.   While Anderson's delicate decoration of the third-floor window frames could have more easily and inexpensively been done in terra cotta, he opted for carved stone.  The attic took the form of a shallow slate shingled mansard.
The row was completed in 1891 and an advertisement for No. 154 in February described a "Large ten room house" with a "dry cellar; good yard back and front; large furnace."  It would not be until December 19 that The Record & Guide reported, "W. P. Anderson has sold to Royal E. Dean [sic], of Bramhall, Dean & Co., No. 154 West 94th street, a three-story brick and brown stone dwelling."
Deane was born in Rockingham, Vermont in 1830, and according to The Great Sound Money Parade, "At the age of thirteen he entered the trade of tin plate and sheet iron workers."  He was now the president of the Bramhall Deane Company, manufacturer of kitchen ranges and heating and ventilating apparatus.
A decade after Deane and his wife, the former Elizabeth Stuart, moved in, the house got an unexpected and highly-publicized additional resident.  The Deanes' married son, Robert, lived in Chicago.  At the turn of the century he and his wife, Mamie Louise, separated.  Mamie got custody of their teen-aged daughter, Lillian, known as Daisy.  She took the girl to Philadelphia to live.
It seems that both Daisy and her father were disgruntled with the arrangement.  In 1901, during a three-day visitation, Robert spirited the girl away (what today is known as parental kidnapping).   The Buffalo Enquirer said, "Deane took his daughter to New York and left her with his parents, Mr. and Mrs. Royal Deane of No. 154 West 94th Street."
At the beginning of the fall term, Royal and Elizabeth placed Daisy in St. Margaret's Boarding School in Buffalo.  "At the same time instructions were given to the governess, Miss Tuck, not to allow the girl to see her mother.  Miss Tuck was obliged to obey these instructions," said The Buffalo Enquirer.
It took Mamie and a Pinkerton detective eight months to track her down, but on January 27, 1902, Mrs. Deane showed up at the school to see Daisy, "but the request was refused."  Mamie returned with an attorney with a writ of habeas corpus, but they were too late.  Miss Tuck explained to Justice Kruse, "that after the mother called on her, and three hours' before the writ was served, she had taken Daisy to the New York Central Station and put her on a train bound for New York, where her grandparents were waiting for her."
Now, Mamie headed to New York City, arriving on January 29.  The New York Herald reported, "According to Royal Deane, his granddaughter has no desire to return to her mother, with whom she lived for a number of years."  When a reporter knocked on the 94th Street door, Deane asserted that his 17-year-old granddaughter "is old enough to decide matters for herself.  If she wants to go back to her mother she can do so, but she does not wish to go back, and I shall keep possession of her."  It appears that the courts eventually agreed with Deane and Daisy remained with her grandparents.
In October 1904 Deane sold the house to Robert Moore.  The Deanes did not go far.  They purchased a house just a block away at No. 37 West 94th Street in 1907.
Moore was born in Belfast, Ireland in 1822 and came to American as a boy.  He went West and became engaged in the cotton business, eventually opening the firm of Robert Moore & Co. in Cincinnati.  The New York Evening Telegram later said it "became one of the best known in the country."  He moved to new York in 1868, and established the headquarters of the firm here.
Moore's wife, Alice, who was about 40 years younger than he, was his second wife.  He had four children from his first marriage and two with Alice.
He died in the 94th Street house on February 13, 1914 at the age of 92 from "infirmities of old age," according to the New York Herald.  The newspaper noted that he "is believed to have been the oldest member of the Cotton Exchange."
Alice did not let grass grow under her feet.  Dr. Joseph A. McPhillips was called to No. 154 West 94th Street not long after Robert's death.  The New-York Tribune reported, "Then Dr. McPhillips became a social caller, and...her social position was a great aid to the physician in building up a large practice."
Rather scandalously, Alice permitted the doctor to move into her home and set up his office there.  Over the next months "she made various loans and gifts to him," she asserted.  According to Alice, on June 12, 1915, just four months after her mourning period had ended, "she consented to become the wife" of Dr. McPhillips "within a reasonable time."
Three years later Alice decided that "a reasonable time" had passed and with no wedding in her future, she sued.  On September 24, 1918 the New-York Tribune reported that the "wealthy widow" had filed a $50,000 breach of promise suit, plus $14,000 for "incidentals."  The total amount would equal just over $1 million today. The much-wronged Alice Moore (left) posed with her daughter, Constance, outside court.  The News, March 25, 1920 (copyright expired)
The New-York Tribune reported, "She alleges that despite his promise the physician has refused to marry her and she has suffered great financial loss, besides 'mortification to her affections.'"  She was also concerned that her hopes of finding another husband had been seriously damaged.  "Mrs. Moore adds that she has been at all times and still is willing and ready to marry Dr. McPhillips, and that his failure to keep his promise 'ruined her prospects.'"
Things got steamy during courtroom testimony, at least by Edwardian standards.  She testified that the doctor routinely kissed her.
"Were they loving kisses?" an attorney asked?
"What else could they be?"
"Did he kiss you on the cheek?" she was asked.
"No.  On the mouth."
And so forth.  It is unclear if Alice received any reward from the doctor in her widely-publicized suit, but her longed-for marriage, understandably, never happened.
Alice Moore sold No. 154 to Daisy Warden in March 19, 1919, who quickly resold it to Puerto Rican-born Arthur Martinez a year later in April.  Living with his parents were Frank Martinez and his wife, Violet.  Frank had graduated from Cornell University in 1906 and practiced law both in New York City and in San Juan.
The family did not stay in the house long.  Arthur sold it to Dr. Joseph A. Lopez in July 1922, who sold it four years later another physician, Captain William A. Bisher.   Bisher was a military doctor, attached to the Medical Corps and working at General Hospital 76. 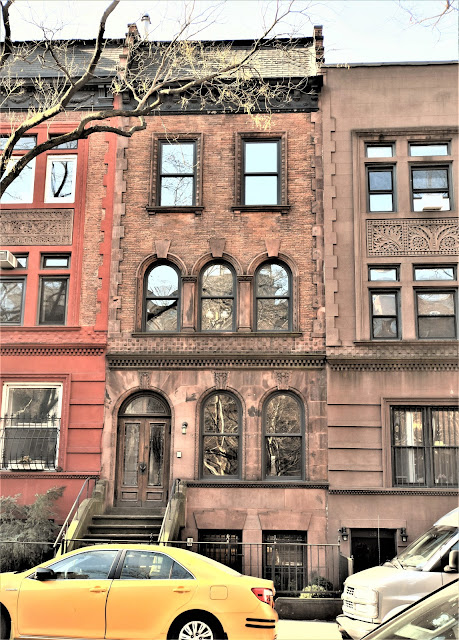 It is unclear how long Bisher remained at No. 154.  Perhaps because of its narrow width, the house was never converted to apartments.  Little changed today, it is home to Torborg Architects, interior renovation and design firm, headed by Connie and John Torborg.
photographs by the author
no permission to reuse the content of this blog has been granted to LaptrinhX.com
Posted by Tom Miller at 1:09 AM