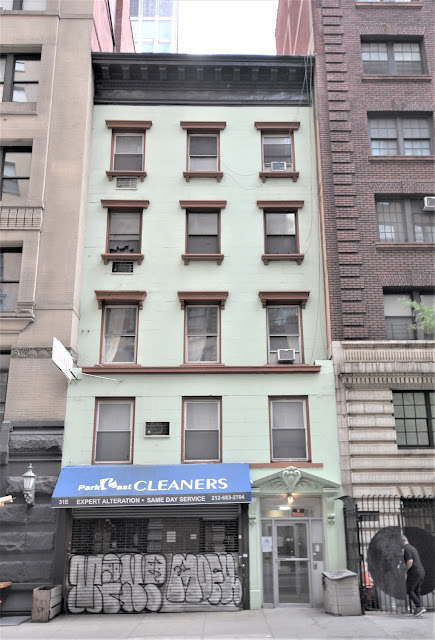 J. W. Oliver focused much--if not all--of his professional attention to the Temperance Movement.  In 1845 he was president of The Washington Temperance Society and sat on the executive committee of the General Temperance Council of the City of New York.  The following year he was a speaker at the week-long Temperance Convention.
It was about this time that he moved his family into the Italianate style house at 31 East 30th Street in the upscale Murray Hill neighborhood.  Four stories high above an English basement, its parlor level most likely featured full-length windows and a handsome pedimented entrance.
The parlor was the scene of a heartbreaking ceremony in the summer of 1851.  Oliver and his wife, Ellen M., had one son, 4-year old George Briggs Oliver.  He died on June 15 and his funeral was held here four days later.
Soon afterward Oliver sold the house to William Hustace and his wife, the former Rachel Maria Treadwell.  The couple had three young sons, William L., Ephraim Treadwell, and Francis at the time they moved in.  Two daughters would soon follow, Emily, born in 1853, and Grace in 1859.
Hustace operated an extensive shipbread business with two locations, one on Warren Street and the other on Front Street.  Shipbread, today better known as hardtack, was an essential commodity in the larders of every seagoing vessel.  The inexpensive biscuits outlasted perishable foods on long ocean voyages.  Hustace was, as well, a director in the Merchants' Insurance Company of the City of New York.
Ephraim Treadwell Hustace was named after his maternal grandfather.  He died on December 12, 1859 at just 18-years-old.  As was customary, his coffin sat in the parlor until his funeral on December 14.
As had been the case with the Oliver family, the Hustaces left East 30th Street shortly after their son's death.  Just months later George Guest Haydock and his family purchased 31 East 30th Street.
Born in 1814, George was a partner with Edmund Coffin in the auction business of Coffin & Haydock on College Place (later West Broadway).  He and his wife, Patience Caroline, had married on October 25, 1839.
By the early 1870's George changed course and went into business with his brother, Robert, to import earthenware.  They were in serious trouble in the summer of 1875 when United States District Attorney Bliss began a suit against them "to recover $100,000 duties and penalties alleged to be due the Government by defendants on account of undervaluation and false classification of invoices of earthenware," as reported by The New York Times on June 19."  It was a major case, the amount of the suit being equal to about $2.4 million today.
Patience and George remained in the house at least through 1886.  In 1897 it became the home of newlyweds Joseph and Estelle White.
The bride was the widowed Laurette Estelle Pendelton Horne.  Born in 1853, she had two grown sons by her first marriage, Francis who was 21-years old, and Granville Nathan Horne, who was 22.  Laurette, who went by her middle name, married Joseph Baker White on the evening of November 11, 1897 in All Souls' Church on Madison Avenue.  She was escorted by her son, Francis.  The following day The Brooklyn Daily Eagle announced, "Mr. and Mrs. White will be at home Wednesdays in January from 4 until 9 P.M., at 31 East Thirtieth street, New York."
The Whites' residency would be relatively short-lived.  By the turn of the century the house was being operated as a high-end boarding house.  Among the residents were the attorney Joseph W. Tilton; Police Commissioner Francis Vinton Greene; Dr. William Oliver Moore, a specialist in diseases of the eye and ear; and Dr. Ellice M. Alger, an ophthalmologist.
Being Police Commission had its advantages when it came to neighborhood nuisances.  On January 16, 1903, Francis Greene found a foot patrolman named Magner and complained "that the residence next to his own, 31 East Thirtieth Street, had been undergoing repairs, and that several charcoal stoves had been placed in the rooms to dry the plaster," according to The New York Times.  "The odor from the stoves was objectionable to the Greene family," said the article.
The patrolman "hastened to the station to consult with those more learned in the law than himself."  Greene's complaint was taken very seriously.  The New York Times continued, "telephonic communication was had with the Building Department of the borough.  An Inspector was dispatched to the house of which the Commissioner made complaint, and this morning it is expected that the legality or non-legality of the plan for plaster drying will be decided."
In 1911 the house was renovated as an annex to the hulking apartment building around the corner at 121 Madison Avenue.  The stoop was removed and replaced by a two-story storefront that extended to the property line.   The ground floor space became a restaurant for the tenants.  The new residential entrance was crowned with an elaborate pediment.  No attempt was made to modernize the exterior appearance of the top three floors in the least. 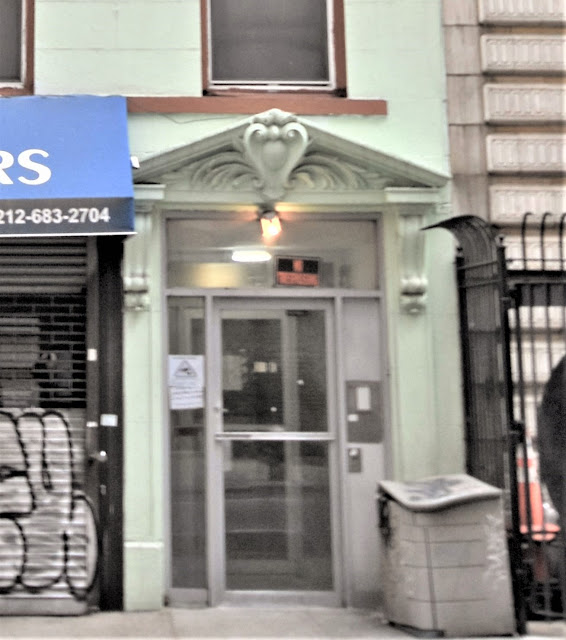 An advertisement in September that year offered "apartments of two large rooms and bath.  $700 to $900."  The rent for the most expensive apartments would equal about $2,000 per month today.  An ad three years later was more specific about the layout, describing a "connecting large living room, bedroom and bath; restaurant and room service if desired.  Restaurant for Tenants Only."
Among the tenants in 1920 was Mrs. M. A. Fanning, who was highly involved in the Service Club, which provided assistance to maimed soldiers returning from the recent war.  On January 25 the New-York Tribune reported that the club had met in the Fanning apartment the day before.  "The club is taking charge of the canteen work of the Carry-On clubs, and plans were made for a card party to be given at the Hotel Pennsylvania on February 27 for the Carry-On work for the permanently disabled men."
The building's most celebrated tenant was Weldon Kees, whose astonishingly broad resume included playwright, poet, painter, novelist, jazz pianist, short story writer, literary critic and filmmaker.   According to biographer James Reidel in his 2003 Vanished Act, The Lift and Art of Weldon Kees, Kees moved in March 1943 "to a furnished apartment at 31 East Thirtieth Street."  He notes, "The apartment on East Thirtieth Street also gave Kees a base from which to promote his anthology and a place to come back to when he met with disappointment."
In 1951 the property was renovated again, resulting in a store on the ground floor and three apartments per floor above.
Masaharu Tomono lived here in 1972.  Born in Japan, the 24-year-old worked as a photographer's assistant.   Tomono attended a New Year's Eve party uptown that year.  For some reason he took a cab to a friend's apartment on East Houston Street afterward, rather than returning home.  He arrived there just after 5 a.m. and was attacked by three youths in the hallway, robbed of more than $500, and stabbed to death.   Two of the boys, just 14- and 15-years old, were captured before the end of the month.
Today the brownstone facade of the Oliver house is painted mint green and a dry cleaners occupies the former 1911 restaurant space.  But, by looking at the upper floors, one can imagine when well-dressed residents descended the stoop to the carriage awaiting them at the curb.
photographs by the author
no permission to reuse the content of this blog has been granted to LaptrinhX.com
Posted by Tom Miller at 1:21 AM