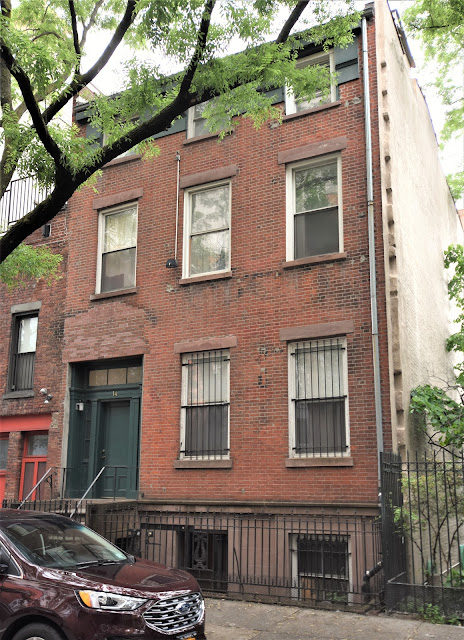 In the early 1830's Bond Street was arguably the most fashionable address in New York City.  Although its name changed to Second Street on the east side of Bowery, the upscale tenor spilled over.  Around 1835 or 1836 builder Ephraim H. Wentworth erected a long row of houses along the northern side of Second Street between Bowery and Second Avenue.  Faced in Flemish bond brick, the two-and-a-half story Greek Revival homes were trimmed in brownstone (a step down from the marble that adorned many of the Bond Street residences).  The brownstone framing and heavy entablature of the doorways were expected in the style and the sidelights and transoms of the single-doored entrance were handsome, if not exceptional.  The broad fascia boards below the cornices were punctured by the attic windows.
The family of E. Lane lived in 14 Second Street (the "East" would not be added to the block for decades) in the 1840's.  As was the case with most well-to-do socialites, Mrs. Lane's name appeared in newspapers and journals for her charity work.
The Lanes took in a select few boarders.  In 1840 and '41 William H. Willcox lived with the family while he attended New York University, and in 1847 Mary W. Mason, a school teacher, lived here.
An advertisement in the New-York Daily Tribune on December 30, 1847 read:
Board in a Private Family--Three young gentlemen or a gentleman and his wife can be accommodated with board and good rooms in a private family where there are no other boarders.  The best of references required.  Apply at 14 Second-st., near the Bowery.

At the time of the advertisement wealthy wholesale grocer John B. Moreau lived on Greenwich Street.  He had married Anne E. Ferris, the daughter of Lansing (who went by Laning) and Cordelia Ferris, in December 1845.  By 1851 the couple had moved to 14 Second Street, along with Anne's parents.
John B. Moreau was a partner in Moreau & Parker at 150 West Street.  He was, as well, a director in the Astor Fire Insurance Company.  Most notably, however, he was a noted bibliophile.  In 1859 he would found the Bradford Club, described by the American Art Association in 1915 as "one of America's foremost book-clubs."  His library in the Second Street house focused on New York history and also contained a collection of important American autographs. 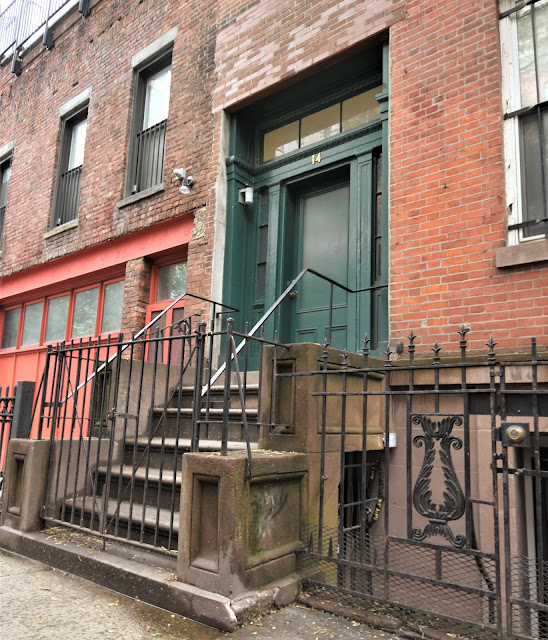 The paneled pedestals at the foot of the stoop most likely held ornate wrought iron basket newels.  Note the lyre motif in the areaway fencing.
In the meantime, John's brother Joseph and his wife, the former Aletta M. Faulkner, lived on West 20th Street.  The couple had been married in 1841 and had two children--Aletta and Fanny.  On August 3, 1854 Aletta died "after a short illness," according to the New York Herald.   Joseph and the girls now moved to 14 Second Street.
Now long afterward, Cordelia Ferris's health began failing.  After what the New-York Daily Times described as "a lingering illness," she died at the age of 69 on June 13, 1856.  Her funeral was held in the parlor two days later.  Laning Ferris survived his wife by two years, dying on April 8, 1858 at the age of 82.  His funeral, too, was held in the house.
The string of deaths and funerals in the house continued on February 25, 1862 when Joseph died at the age of just 44.  He left an estate valued at about $1.75 million in today's money. John and Anne were appointed guardians of Fanny and Aletta.

The family received a scare on December 30, 1872.  At just after 9:30 that morning a servant was at work "in the basement, in a smoke house," according to the New York Herald.  A few pieces of wood fell onto the fire, spreading it throughout the room.   While the panicked servants battled the small blaze, the fire department was having problems of its own.  "The large engine in the vicinity of the Fifteenth precinct station house got stuck in the snow on its way to this fire," said the New York Herald, "and Captain Byrne turned out with all his force and helped the engine out of the trouble."  The Moreau servants managed to extinguish the fire, but not before more than $4,000 in damages by today's standards was done.
Anne Moreau left Second Street in 1886 following her husband's death.  John's "valuable and interesting library" was auctioned that year by Bangs & Co., which described it as "comprising a carefully selected collection of Americana, standard literature, privately printed books; works relating to New York City; curiosa; extra illustrated works, &c."
The house next became home to the August Hassey family.  He and his three adult sons--August C., Emile A. and Edward F.--were lawyers in the same practice.  All three lived with their widowed father along with Emile's wife, Emma. 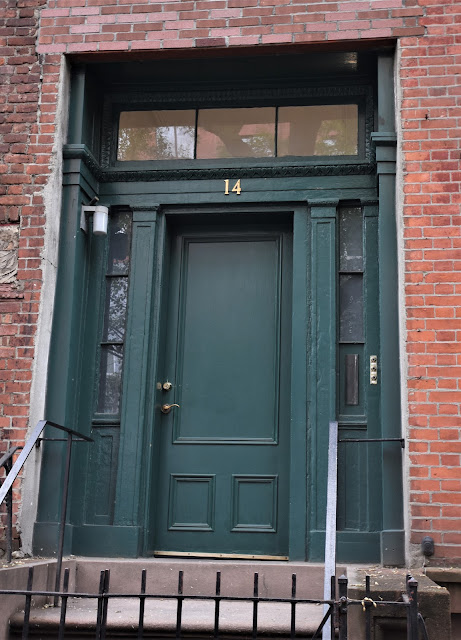 Like the Moreaus, the respectable Hassey family drew little attention to itself.  But that would change two years after August C. Hassey's unexpected death on May 1, 1898 at the age of 40.
On the night of September 29, 1900 Alice Bolt "was seized...by a policeman just as she was about to leap into the North River at the foot of Fifteenth street," reported the New York Herald.  "All she would tell the police was that she had lived in New York for fifteen years at No. 14 Second street with August Hassey, a lawyer, who died about a year and a half ago.  His death, she said, left life not worth the living."
Alice Bolt was about 39-years old and was described as  being "handsome and well dressed."  The New York Times reported, "She met Mr. Hassey, she said, shortly after she came from Bar Harbor, Me., which was her home, and their friendship had continued up to the time of his death."  The article added, "since that time she had brooded until she no longer had any desire to live."
The next morning Alice appeared in the Jefferson Market Court.  Magistrate Crane asked her, "Would you promise not to make another attempt on your life if I should allow you to go?"
"No, I would not.  I would try to kill myself today," she replied.
And so Crane delayed the case for an hour, hoping that she would change her mind.  But she did not.
"Then I will have to commit you to Bellevue for medical examination," he told her.
"I suppose I can kill myself at Bellevue as well as any other place," she declared. 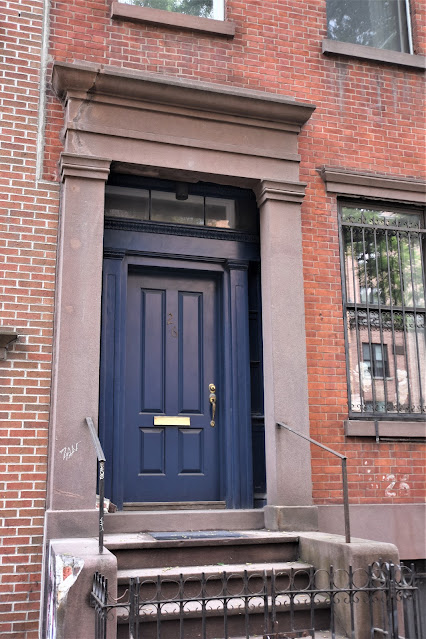 The entrance enframement originally matched this example, another of Ephraim Wentworth's row.
By now both Edward and Emile had moved out of the Second Street house.  A serious case of sunstroke the previous summer had made their elderly father an invalid.  Reporters rushed to the Hassey house after Alice Bolt's court appearance.  The New York Herald reported, "An old woman, who said she had been employed there for many years as housekeeper, admitted that August [C.] Hassey had died eighteen months before, but declared she had never heard of Miss Bolt."  She refused to allow anyone to disturb her employer.
On March 16, 1903, August Hassey died at the age of 81.   His funeral three days later would be the last held in the house.   The once-elegant residential neighborhood had greatly changed by now and in February 1908 Max Zierer moved his paper business into the former house.
Zeirer had been in business for 12 years and his move may have been prompted by financial problems.  Only ten months later, on December 19, he filed for bankruptcy.
The Lower East Side was the center of the labor movement by now and following end the of World War I the basement of the house was known as Hennington Hall, where labor meetings were held.  It was possibly around this time that the Greek Revival enframement of the doorway was removed.  The brownstone cornices over the windows were also shaved off during the 20th century. 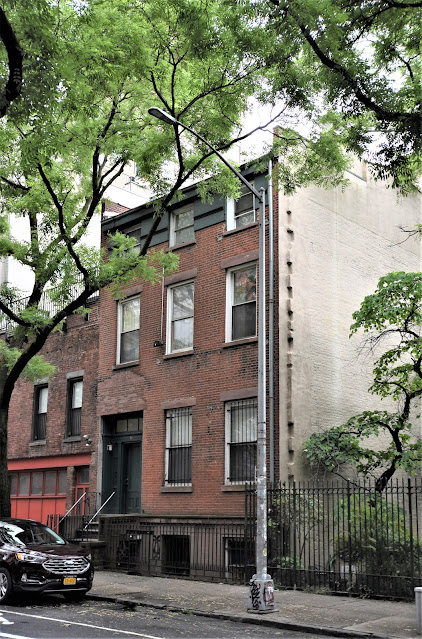 Amazingly, while the door itself has been replaced, the 1836 doorway survives intact, as does the broad fascia board and attic level.  With just a little imagine, one can imagine the house when well-to-do families and their servants lived here.
photographs by the author
many thanks to reader Joseph Ciolino for requesting this post
no permission to reuse the content of this blog has been granted to LaptrinhX.com
Posted by Tom Miller at 1:18 AM