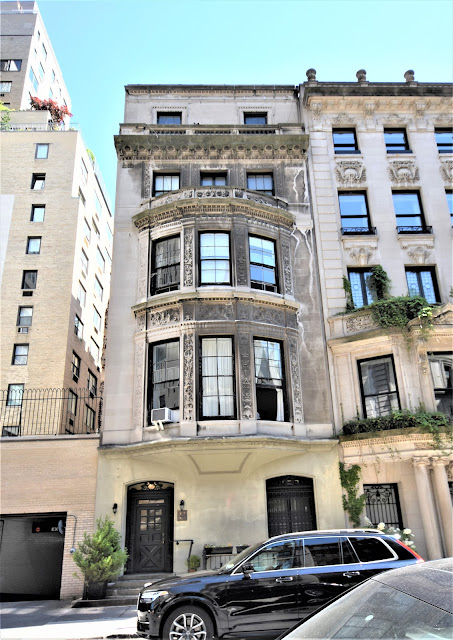 On May 2, 1900 Albert Tilt died at the age of 59 in the brownstone-faced house he had shared with his wife, Adelaide, for years.  Seven years later, in March 1907, his estate sold the 25-foot residence to Samuel Hempstead Valentine.  The Tilt house, built in 1881, was architecturally outdated and, unlike some new homeowners who had their old homes dramatically remodeled, the Valentines demolished it and started over.
They hired the architectural firm of Carrere & Hastings, whose masterful New York Public Library was still rising on Fifth Avenue, to design the replacement home.  The plans, filed in May 1908, estimated the cost of construction at $60,000--or about $1.7 million today.
Completed in 1909, the architects had created a five-story limestone-faced mansion with a striking two-story bowed oriel.  Its understated ground floor allowed the elaborate Renaissance-inspired carvings of the oriel to take center stage.  Behind the stone balustrade atop the stone cornice the fifth floor took the form of a mansard roof. 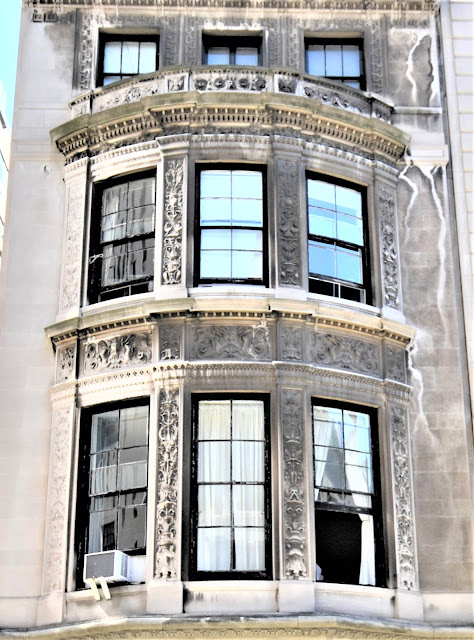 The second floor held the drawing room and dining room, separated by a gallery, while the library was on the third floor.
An attorney, Samuel H. Valentine had graduated from Amherst College and Columbus University Law School.  He retired from the law firm of Benedict, Taft & Benedict in 1896.  Valentine came from "one of the oldest families" of New York City, according to The New York Times.  The Norwich Bulletin went further, saying that he "came from a family that has been identified with New York up-wards of 300 years."  He owned large amounts of Manhattan real estate and the grounds upon which Woodland Cemetery was built had been his great-grandfather's estate.
His family's long history in America were reflected in Valentine's memberships in the Sons of the Revolution and the Society of Colonial Wars.   His wife was the former Eliza Williams Porter, known to her friends as Lillie.
Lillie entertained often in her new home.  On January 4, 1914, for instance, The Sun noted she would be hosting a "supper and dance" that week; and on March 3, 1915 the New-York Tribune reported, "Mrs. Samuel H. Valentine gave a dinner for twenty-four last night at her home, 5 East Sixty-seventh Street."
While Lillie busied herself with dances and dinners, Samuel was interested in modern transportation.  He was a founder of the Automobile Club of America and of the Aero Club of America.
The Valentines had acquired their summer home, Valmar, at Narragansett Pier, Rhode Island in 1906, the year before they purchased the old Tilt house.
Valentine first showed signs of heart problems in 1914.  In September 1916 the family was no doubt preparing to close the Rhode Island house for the season.  According to the Norwich Bulletin, on September 15 he suffered a heart attack "as he was entering his automobile on the beach at the pier."  He was taken to Valmar where he died.
His passion for aeronautics was reflected in a bequest to the Aero Club of America.  Aerial Age reported on December 11, 1916 that he had left "the sum of $10,000...to establish a prize, or prizes, at the discretion of the Aero Club, for the encouragement of 'aircraft which shall not use gasoline as a fuel.'"  The article explained, "Mr. Valentine's bequest is expected to stimulate interest in the discovery of a new fuel, lighter than gasoline, which will make longer flights possible."
Lillie remained in the East 67th Street mansion and, following her period of mourning, shared Valmar with her sister, Henrietta and her husband Arthur H. Lippincott.  As had been always been the case, the society columns followed Lillie's movements.  On October 14, 1921, for instance, the New York Herald announced, "Mrs. Samuel H. Valentine has closed Valmar, her place in Narragansett Pier, and will be at 5 East Sixty-seventh street before going to Hot Springs, Va." 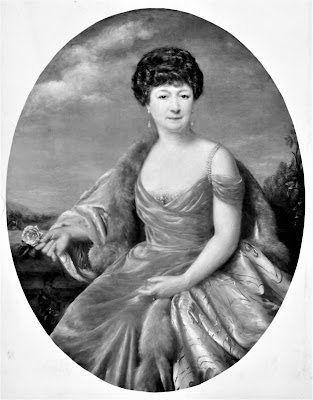 This 1925 portrait of Eliza Porter Valentine was painted by Adolfo Muller-Ury.
In the early 1920's Palm Beach, Florida began attracting wealthy northerners during the winter social season.  Lillie joined the trend by purchasing a third home there, on El Brillo Way.
On January 4, 1934 she died in the 67th Street mansion.  Eliza Porter Valentine left an estate of about $12.4 million in today's money, according to the Palm Beach Post.  Much of it, "half a million dollars in cash or securities," according to the article, along with the three residences, were left to her sister, Henrietta Lippincott.  Lillie was generous to her loyal servants, leaving to her personal maid, Florence E. Summers, and her secretary, Estelle M. Leary, each $10,000 ($190,000 by todays standards, certainly a boon during the Depression years).  Florence also received a diamond bracelet.
The Lippincotts continued summering at Valmar.   Following Arthur's death in 1937, Henrietta moved to 910 Fifth Avenue, but retained ownership of 5 East 67th Street, leasing it until her death at Valmar on September 26, 1948.  Her estate was valued at just under $2.3 million, equal to nearly 12 times that much today. 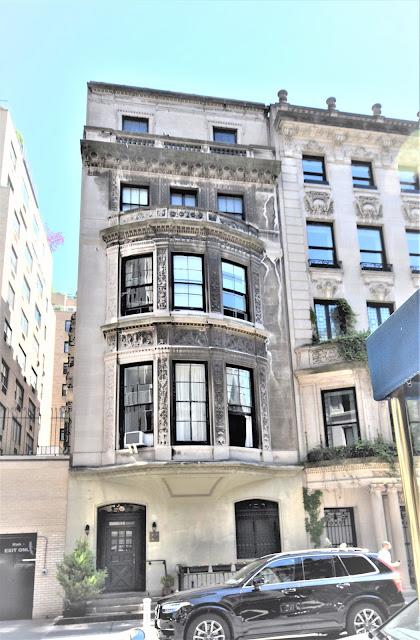 Henrietta's estate sold the house in April 1949.  A renovation completed the following year resulted in 18 apartments.  The mansard was altered with a less pleasing vertical facade and a sixth floor, unseen from the street, was added.   Although the stone balustrade atop the cornice was still in place as late as 1981, it has since been removed.  The limestone facade cries out for a gentle cleaning.
photographs by the author
no permission to reuse the content of this blog has been granted to LaptrinhX.com
Posted by Tom Miller at 1:18 AM