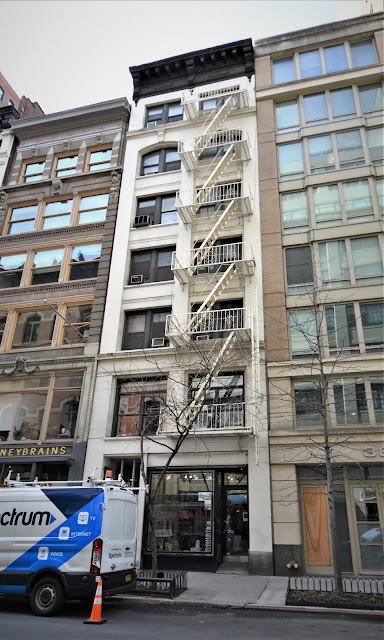 Samuel Smith Purple was 17-years old in 1839 when his father, Lyman S. Purple, a shoe manufacturer, died.  The teen ran his father's business during the day and read medical books at night and in the mornings.   By the end of the Civil War he had become a respected doctor and author of medical books and journals.  He and his mother, Minera, lived in a fine three-story home at 36 West 22nd Street where her funeral was held on March 29, 1868.

When Dr. Purple died in the house on September 29, 1900, his was one of the last private homes still standing in the neighborhood.  Sixth Avenue was lined with massive department stores and the residences along his block were one-by-one being razed for commercial buildings.

Dr. Purple's home was sold to Benjamin Stern, a partner in Stern Brothers Department store on West 23rd Street.  If the firm had intended to build an annex or warehouse on the site, it changed its mind.  On January 17, 1903 the Record & Guide reported that Stern had sold the old house to the Standard Construction Co.  "The buyer will erect a 7-sty loft building," said the notice.

The buyers wasted no time.  On the same day the Record & Guide also reported that Standard Construction Co. had hired George F. Pelham to design the $40,000 loft and store building.  (The cost of construction would translate to just over $1.2 million today.)

Pelham, who was better known for designing apartment buildings, produced a restrained, stone-faced structure with little ornament.  The tripartite design was defined by two projecting cornices--one above the second floor and the other above the sixth.   By crowning the sixth floor openings with segmental arches and keystones, Pelham created the impression of four-story arches.  The terminal pressed metal cornice was perhaps the most elaborate of the decorative elements.

The building was sold just after construction began.  On February 13, 1903 the Record & Guide announced that Bamberger-Stern Co. had purchased it "from the plans."  The New York Times reported "the buyers will occupy the building."

Bamberger-Stern Co. was operated by Emanuel Bamberger and Julius S. Stern.   A manufacturer of "laces, embroideries and curtains," it leased the store to Melles & Co., which described itself as "outfitters of women."

The opening announcement of the high-end store appeared in newspapers on September 27, 1904.  It called its new space "this modern and well appointed store" and prompted women to "inspect the most fascinating creations" of noted European couturiers.

The upper floors filled with garment and millinery shops.  In 1907 Sternberger & Ballerstine, wholesale millinery, moved here from No. 695 Broadway; and in 1911 the Standard Garment Company took space, for instance.  At the time Kushin & Posnick, makers of cloaks and suits had already been in the building for some time.  In 1913 they employed 22 men and 6 women who worked 50 hours per week.

The firm ran into serious labor problems in 1914.   In January its workers struck.   One of the partners, R. Kushin, said "I wondered what was the matter.   But when I looked over the work done the day before I found the reason  Every garment they had been working on was spoiled, and spoiled so badly that the work could not be corrected...I saw then that at their new union they had learned about sabotage."

Kushin retaliated by quickly hiring non-union workers.  It was a potentially dangerous decision.  Strikes in the first decades of the 20th century often involved threats, violence and even bombings.  The new workers were "waylaid and attacked...nearly every day for the past few weeks," Kushin said a few weeks later.  "Messengers sent out from this shop have been attacked and their bundles taken away from them."

It culminated at 1:15 on the afternoon of February 14 when a dozen men carrying broken iron and lead pipes burst through the door.  The leader shouted "Traitors, we'll teach you to break up a strike," as the pipes flew through the air.  The New York Times reported "The others joined in shouting curses, and hurling heavy chunks of iron and lead at the employees, some of whom had taken shelter behind the piles of unfinished garments."

The non-union workers were even more terrorized when the thugs pulled out revolvers and began shooting.  "Three women who hid behind a pile of dress goods shrieked again and again, both for help and for mercy."  When their guns were emptied, the group left by the stairway.  "Men who had left their lofts to find out what was the matter promptly darted inside the doorways again," said The New York Times.  Two of the workers who were hit by pipes were taken to the New York Hospital.

Among those who "darted inside" were likely employed by Blumberg & Schwartz, makers of skirts and dresses; dress manufacturer Schiff & Kornbluth.

Frank P. Schiff was involved with Schiff & Kornbluth.  The 27-year-old was tragically killed the following summer.  On August 14, 1915 he visited Rockaway Beach.  Life guards posted warnings that the rip tides were "unusually strong" and urged bathers to keep out of the water.  Seven beach-goers died that afternoon--the body of one swept out to sea and lost.

Schiff was among the victims.  Although he was still alive when life guards pulled him from the surf, the New York Herald reported "Dr. Victor, of the Rockaway Beach Hospital, was unable to revive him with the aid of a pulmotor."

The city was plagued with a rash of crimes in 1919.  On December 29 that year the New-York Tribune reported "Burglars, leggmen, loft looters and thieves of every description have robbed the people of New York within the last year of cash and goods amounting approximately to $25,000,000."  Among the victims of "loft looters" was the Modern Costume Company at 36 West 22nd Street.  Breaking in on the night of December 3, the thieves made off with $10,000 in goods; more in the neighborhood of $148,000 today.

In April 1930 the building was sold to the Consolidated Druggist Realty Company.   Architect William C. Killiam converted it to warehouse space, after which it was leased to the New York Merchandise Company.  The New York Sun reported that the firm "will use the building for storage and space in addition to their present quarters on West Twenty-third street."

After being used as a warehouse for years, the lofts began to see strikingly different types of tenants by 1970.  That year the second floor became home to the headquarters of the Women's Liberation Center.  On July 1 that year, Marylin Bender, writing in The New York Times, advised, "The center serves as a meeting place for groups and a clearinghouse for information about the movement."  A spokesperson said "This is more of a woman's space than a political place." 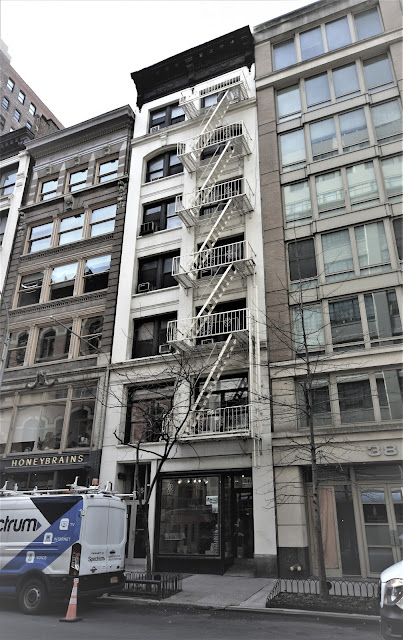 A conversion completed in 2007 resulted in one apartment per floor above the ground level.  Other than the altered storefront, the clean lines of George F. Pelham's 1903 design survive intact.

photographs by the author
no permission to reuse the content of this blog has been granted to LaptrinhX.com
Posted by Tom Miller at 1:08 AM