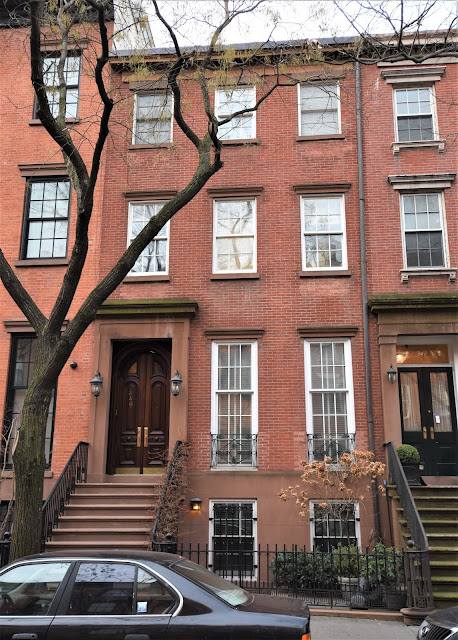 As Clement C. Moore initially sold off his family's estate, Chelsea, in the first decades of the 19th century, he wrote restrictive covenants into the deeds to ensure that only high-end residences would be erected.  In January 1835, Abisha Smith purchased the six plots on West 22nd Street between Eighth and Ninth Avenues under the stipulation that one 25-foot wide house would be erected before the end of the year.  A stone cutter and mason, he was almost undoubtedly the brother of stone dealer Bezaleel F. Smith who would erect a row of houses along the same block.

Abisha Smith erected a handsome residence for himself and his wife, Lydia Ann, in 1836 to comply with the deed requirements.  Five years later, 1841,  he began construction on the remaining houses--no doubt not coincidentally the same year that Bezaleel F. Smith began his row.  Among those erected by Abisha was No.  246 (renumbered 340 in 1868) which, like its neighbors, was designed in the Greek Revival style.  Three stories tall, it was faced in red brick and trimmed in brownstone.
The house was home to Adolphus M. Corn and his family at least through 1852.  Corn was a wealthy merchant with offices at No. 177 Water Street and a member of the New York Gold Exchange.
The next resident was banker George Haight, here by the mid-1850's.  Living with the family was Betsey Stout, the widow of William Stout and quite possibly Haight's mother-in-law.
On Saturday afternoon, January 21, 1860, the family sat down to eat.  In the meantime, a brazen woman entered the house, most likely through the basement door.  The New-York Tribune reported, "Letitia Williams, a young colored woman, entered the house of George Haight, No. 246 West Twenty-second street, while the family were at dinner, and stole from there a silk dress, two pair of pantaloons, a coat and some other articles of clothing, in all valued at $55.50."  The amount would top $800 today.
As stealthy as she was, Letitia foolishly tried to leave by the main entrance.  The New York Times reported that she "was just passing out of the front door with her booty, when Mr. Haight observed her."  He detained the woman until a policeman was summoned to arrest her.
The Haights remained in the house until 1864 when it was sold to butcher Henry Keyser and his wife, Mary.  Keyser's business was located in the Clinton Market.  Following his death in 1869, Mary sold her home.  An auction of the furnishings was held on May 5 and the sale catalog hinted at the upscale interiors.  Among the items was a "rosewood 7 octave Piano," clocks, bronzes and "ornaments," and parlor and bedroom suites in rosewood and walnut. 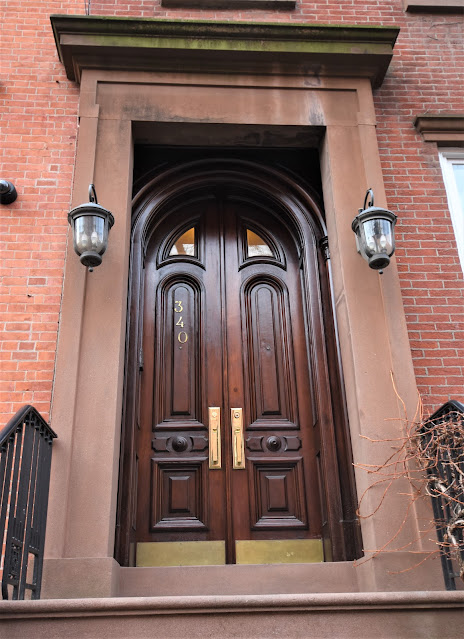 The entrance was updated with these striking Italianate entrance doors sometime after the Civil War.
Ernest Greenfield and his wife, the former Margaret J. McClennan, purchased No. 340.  Greenfield had been a partner with George and Albert Young in the candy making firm of Greenfield & Young.  The same year he moved his family into the West 22nd Street house, that partnership was dissolved and Greenfield took over the business, renaming it Ernest Greenfield & Co.
The couple had two sons, Nelson and Ernest, Jr., and a daughter Caroline.  Nelson would join his father in the family business, while Ernest, Jr. became a stock broker.
The business was renamed Ernest Greenfield & Son following Nelson's entering the firm.  Its confectionary store and factory, located on Barclay Street, was touted by The New York Times as the "largest manufactory of the kind in the country."  On the afternoon of December 20, 1877, according to the New York Herald, there were "about one hundred and ten persons" working in the factory, although other sources placed the number at more.  The store was filled with customers buying candy for the Christmas holiday.
At around 5:00 Ernest Greenfield was talking to a customer, Joseph Munyen, who later recalled he "felt a sudden trembling of the floor, and was instantly surprised to find that he could scarcely keep his feet."  Seconds later the building was rocked by a massive explosion.  The New-York Tribune wrote, "While horses, carts and men were passing to and fro a sudden explosion rent the air, stunned the pedestrians and frightened the horses; the startled people looked toward the spot at which it occurred and saw the front of Greenfield's confectionery rock and, splitting, pitch forward into the middle of the street."
A reporter to spoke to Joseph Munyen said, "A group of five or six girls were at the time standing between him and the door putting up candies, and he thinks they were all successful in making their exit.  He had no time to pay any attention to Mr. Greenfield, who, he was glad to find, arrived on the sidewalk at the same moment with himself."  Nelson Greenfield also escaped and soon found his father.  The New-York Tribune reported, "Mr. Greenfield recovered in a few minutes from the effects of the shock and went home with his son in a carriage.  His scalp is pretty badly burned and his hands are slightly blistered, but otherwise he has...received no injuries."
The rescue and recovery went far into the night after the fire--which spread to adjoining buildings--was finally extinguished.  It took weeks before all the bodies could be recovered from the debris.  The New York Times later wrote, "By that time the bodies were so badly decomposed that in some instances it was impossible to tell whether one or two had been brought to light."
The factory and store were rebuilt and Ernest Greenfield & Son continued as one of the country's leading candy makers.
Following Ernest Greenfield's death in 1898, his sons sold 340 West 22nd Street.  What had been a sumptuous private home was described by the city's Committee on Fire Patrol in 1899 as a "lodging house." Lodging houses, which rented rooms with a cot by the night only, were the lowest level of rooming houses.
That arrangement was short-lived.  On June 19, 1899 Nelson Greenfield foreclosed on the property.  The family retained possession, leasing it again as a private home.  Although Nelson died in 1901, the estate continued to lease No. 340 until 1916 when it was sold.  It may be, however, that the house technically did not leave the family.  Title was put in the name of Jennie E. McClellan, quite possibly a relative of Margaret McClellan Greenfield. 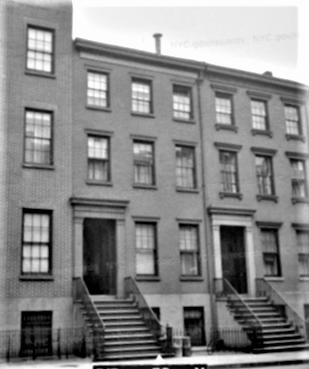 The original Greek Revival entrance enframement can be seen in his photo taken around 1941.  The Italianate doors appear to be the same as those that grace the entrance today.  via the NYC Dept of Records & Information Services.
No. 340 remained a private house until 1970 when it was converted to apartments.  It was possibly at this time that the stoop was removed and the entrance moved to the former basement level. 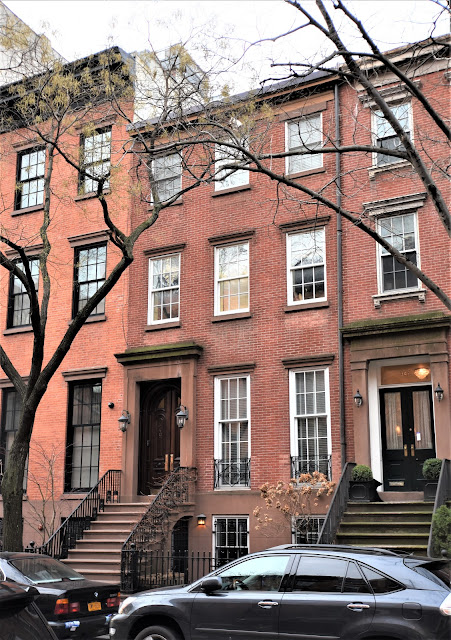 A remarkable restoration was initiated in 2001 to return the property to a single family home.  The stoop was refabricated and a period-appropriate Greek Revival enframement installed (although not identical to the original).  The years-long project brought the house back nearly to its 1841 appearance.
photographs by the author
no permission to reuse the content of this blog has been granted to LaptrinhX.com
Posted by Tom Miller at 1:10 AM