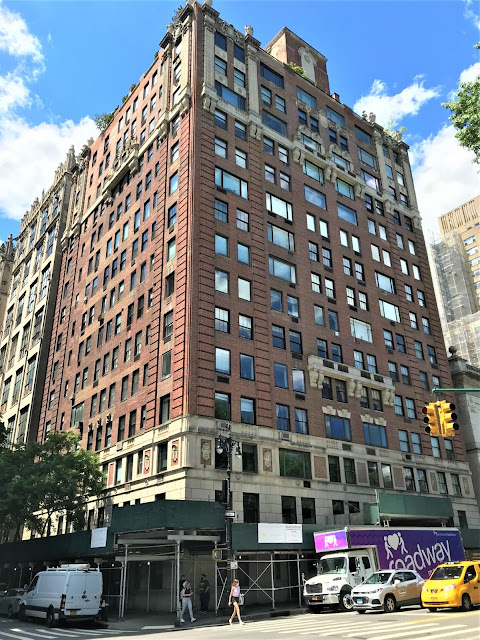 Unlike Fifth Avenue on the opposite side of Central Park, which was lined with opulent private mansions, Central Park West saw the rise of hulking apartment buildings, or "residence hotels," in the last decades of the 19th century.  Among them was the ebullient Beaux Arts style Chatham Court at the northwest corner of West 67th Street.
The seven-story building had just three apartments per floor--two with 10 rooms and one with eight.  A brochure touted, "Uniformed elevator boy, footman, hallboy, porter and superintendent services are at the disposal of the tenants at all house of the day and night." 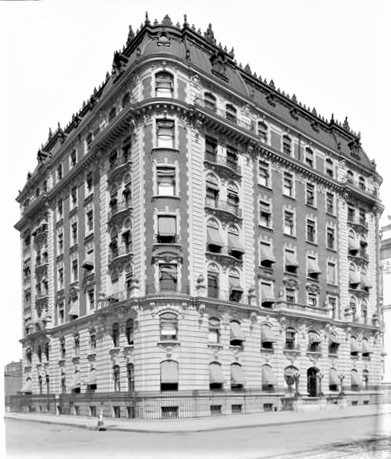 The Chatham Court -- from The World's Loose Leaf Album of Apartment Houses, 1910 (copyright expired)
Victorian apartment houses, no matter how well maintained, fell from general favor in the 1920's.  The decade saw multiple structures along Central Park West razed to make way for sleek, Art Deco buildings with modern amenities.   In 1928 Fred T. Ley & Co., Inc. demolished the Chatham Court and hired renowned apartment building architect Rosario Candela to design its replacement.  (Fred T. Ley, whose company would soon be at work constructing the Chrysler Building, formed the 75 Central Park West Corporation for this project.)
Candela's neo-Renaissance tripartite design included a three-story stone base decorated with massive terra cotta masks within brick panels at the third floor.   The nine-story, brick-faced midsection was sparsely decorated.  A single stone balcony at the sixth floor and a sprinkling of stone lintels and keystones on the fourth provided the only contrast to the blanket of brownish-red brick.  The top section was defined by an intermediate cornice and paired three-story stone pilasters at the corners.  Massive stone urns perched upon the capitals of each pilaster. 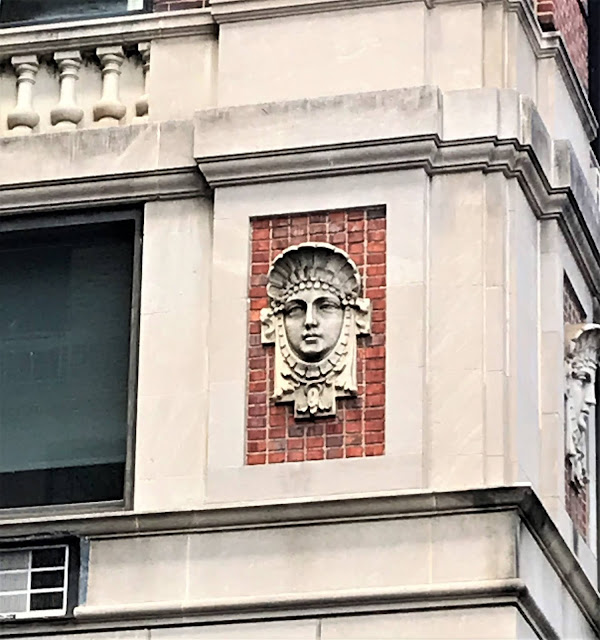 On September 1, 1929, two weeks before the building was opened and three weeks before the infamous Stock Market Crash, The New York Times reported, "A majority of the suites in 75 Central Park West, 100 per cent cooperative house, being erected by Fred T. Lery & Co., Inc...have been sold from the plans."  New Yorkers had scrambled to purchase the sprawling apartments which ranged from four room and two baths to eight rooms with three baths.  There were also duplex apartments of nine rooms and five baths.
By today's standards, the prices were surprisingly affordable.  The cost for an eight-room apartment was $26,000 (about $388,000 today) with monthly maintenance of $200 (another $3,000).
The Great Depression little affected most of the well-to-do tenants.  Among them was Bess Masterson Brown, the widow of Paul Brown, Jr., and her son Paul Brown III.  The teen was as wealthy--or more so--than his mother.  Upon the death of his grandfather, tobacco tycoon Paul Brown Sr., in 1927, he inherited $1,180,000--around 17 times that much today.
The 17-year-old attended Worcester Academy in Worchester, Massachusetts where he was a member of the championship swimming team.  He returned home on March 8, 1930 complaining of a boil on his foot.
Although painful, the somewhat common affliction should have been of little concern.  But infection turned to blood poisoning, which led to pneumonia.  Brown's condition deteriorated until he died in the apartment on March 18.  His funeral was held in the suite the following day.
Actress Barbara Blair lived here at the time.  Born in New York City in 1907, The New York Sun described her as the "blond comedienne of George White's 'Scandals' and often referred to as White's loveliest showgirl."  She took advantage of the building's location to go horseback riding in Central Park.  The pastime resulted in a break from the stage in the spring of 1932 after she was thrown from her horse and spent several weeks in the Reconstruction Hospital recovering.
Only a few months later, on July 27, she was much more seriously hurt.  The day after she was injured in an automobile accident in Bridgeport, Connecticut she was brought home.  A week later, on August 3, The New York Sun reported that she "is still in a critical condition at her apartment, 75 Central Park West, Dr. George B. Donabedian, her physician, reported today."  He added that, "her skull is fractured." 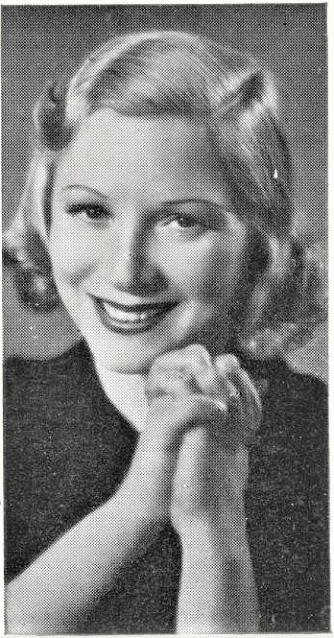 Barbara Blair - from the collection of the New York Public Library
Barbara Blair recovered fully and went on to a motion picture career, appearing in films like the 1938 The Hidden Menace and Bedelia, released in 1946.
Another highly visible resident at the time was John Dalzell Boyd, described by the Citizen Sentinel of Ossining, New York as a "prominent New York architect."  A graduate of Columbia University and the Ecole des Beaux-Arts in Paris, Boyd was a partner in Slattery & Boyd, responsible for buildings like Vernon Hall (today Dow Hall) on the campus of Yale University.  He maintained a "large country estate," as described by the Citizen Sentinel, in Rockland County, New York.
Alexander Konta signed a lease in 1932.  Born in Hungary, he had come to America in 1887 as a young man and was a founder of the Hungarian Loyalty League.  A banker, he had served as Consul General of San Marino and in 1925 was appointed to the State Parole Board by Governor Alfred Smith.
Konta's public reputation had not always been sterling.  During a Senate investigation into the Washington Times in September 1918, "Mr. Konta's name was brought in as the writer of a letter to a German propagandist discussing the possible purchase of a New York newspaper by German interests," as reported by the New York Evening Post.  Konta described that letter as "unfortunate."  Throughout the war he remained under suspicion of being a German sympathizer, but nothing was ever confirmed.
That was nearly forgotten now.  Now retired, Konta had multiple memberships in high-end clubs, including the Manhattan, the National Arts Club, and the Long Island Country Club.  He was a member of the Metropolitan Opera and New York Historical Association.  He would not enjoy his apartment here for long, however.  He died of a heart attack on April 27, 1933.
Another European transplant was renowned violinist Mischa Elman.  Born in Russia in 1891, he had played with the famous Colonne Orchestra when just 11-years old.  On November 3, 1936 the Buffalo Courier-Express said, "The name of Mischa Elman has not failed to this day to bring the multitude to hear him play the music of his masters.  He has just completed a triumphal tour of South America and is about to start on his winter schedule of Carnegie Hall, Boston and Philadelphia after which he will embark for the Orient in January." 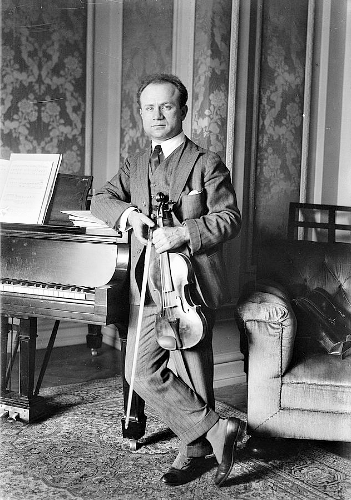 Mischa Elman - from the collection of the Library of Congress
Elman and his wife, the former Helen Frances Katten, had two children.  The Buffalo Courier-Express mentioned, "At school in New York are the two Elman children, Nadia, ten, and Joseph, seven, who live with their famous parents at 75 Central Park West."
Apartment buildings along Central Park did not decline as the decades passed and 75 Central Park West was no exception.  Among the residents in the 1970's were the well-known architect Giorgio Cavaglieri and his wife, mental hygiene consultant Norma Sanford Cavaglieri; and trial layer Harry E. Kreindler and his artist wife, Doris Barsky Kreindler.  Examples of Doris Kreindler's works hang in the Museum of Modern Art, the Metropolitan Museum of Art, and the National Collection of Art in Washington, D.C., among others.
Another well-known resident was lawyer and educator Charles S. Ascher, whose wife, Helen Shire, died in 1960.  He was best known as one of America's leading city planners and housing officials.  Not long after graduating from Columbia Law School he had become so fascinated with city planning that he gave up his law practice.  He had been a member of the team of architects, attorneys and developers who created two of the country's foremost experiments in progressive housing: the 1924 Sunnyside Gardens in Queens, and the community of Radburn, near Fair Lawn, New Jersey, completed five years later.
Ascher frequently participated in international conferences.  Although he was retired by 1976, that year he traveled to Habitat, the United Nations International meeting on housing in Vancouver, British Columbia.  The New York Times remarked, "he bunked not with his contemporaries, but with a group of young students who had hitchhiked to the conference." 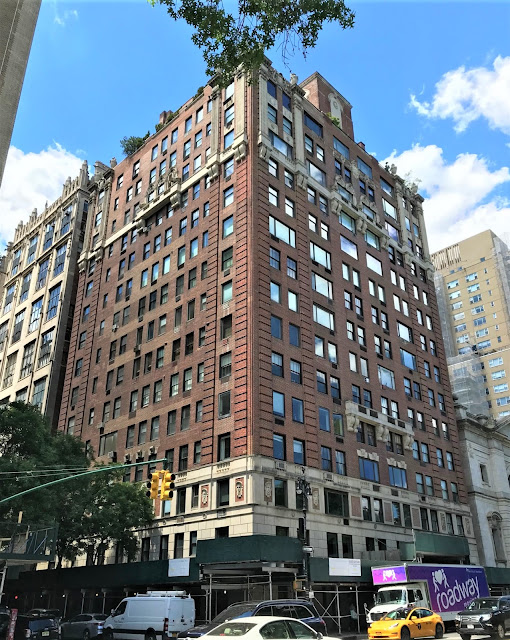 At some point in the early 2000's the building took the name of its predecessor--Chatham Court.  Although perhaps not so architecturally conspicuous as some of its Central Park West contemporaries, the building holds its own in social history.
photographs by the author
no permission to reuse the content of this blog has been granted to LaptrinhX.com
Posted by Tom Miller at 1:04 AM