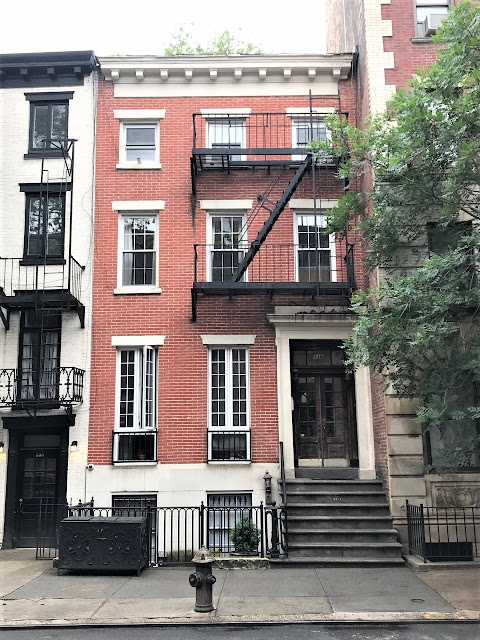 In 1853 the family of Henry H. Houghton lived in the recently-completed house at 190 East 19th Street.  (It would be renumbered 336 in 1865.)  Houghton manufactured and sold gold pens.  His was a significant business, with a location on Maiden Lane and another on Broadway.
Houghton's handsome Greek Revival style house was 20-feet wide and faced in red brick.  The entrance enframement wore "ears" just below the entablature--a common Greek Revival element.
The Houghtons did not remain long.  In 1855 Henry Kiddle and his wife, Jane, moved in.   The couple had a baby daughter, Mary Anna, born in December 1853.
Kiddle listed his profession as "teacher" when he purchased the house.  That soon changed and by 1857 he had been promoted to assistant superintendent of the Board of Education.  Like many well-to-do families, the Kiddles took in boarders.  Attorney John E. Sterling lived with the family throughout their residency, and for two years accountant Edward T. Ruggles boarded here.
The Kiddles suffered heartbreak on December 14, 1859 when Mary Anna died just six days before her fifth birthday.  Her small casket sat in the parlor until her funeral there two days later.
The house was placed for sale, and its advertisement hints at the upscale amenities the family enjoyed.  "The house is 20 by 50 feet, and contains Croton water, gas, bath speaking tube, &c., and is in good order."  The "speaking tube" allowed the family to communicate with servants from major rooms throughout the house.
The new owner was attorney Cephus Brainerd.  Born in Haddam, Connecticut in 1831, he had moved to New York at the age of 22.  He and his wife, the former Eveline Hutchiinson, had an infant son, Cephus, Jr., born in 1859.  There would be two more children, Ira Hutchinson, born in 1862, and Evelyn Warner, who arrived in 1871.
Brainerd's practice was highly involved in claims and international law.  Interested in politics, as well, he was the Chairman of the Executive Committee of the Young Men's Republican Union.  Through that position he was highly instrumental in bringing Abraham Lincoln to New York in 1860 to speak at the Cooper Union.  Arguably Lincoln's most memorable address during this period, it helped secure his nomination.
It was the outbreak of Civil War that cemented Brainerd's place in New York history.  On January 7, 1863 Lincoln sent a message to the Senate nominating various persons for office.  On the list was:

Cephus Brainerd, of New York, to be arbitrator on the part of the United States, in the city of New York, under the treaty with her Brittanic Majestic of the 7th of April last for the suppression of the African slave trade.

Brainerd's work on the part of Blacks continued later that year.  On July 11, 1863 the nation’s first attempt at a military draft played out in New York with a lottery.  When the 1,200 chosen names were published, it was obvious that only the city’s poor and immigrant population was included—the wealthy had bought exemptions or used their political power to circumvent military service.  The result was the Draft Riots—a three-day reign of terror and carnage unlike anything seen in the country before.  Innocent people were murdered, and draft offices, newspaper buildings, and the homes and neighborhoods of the city’s Black population were burned.
Brainerd took up the cases of Black citizens who lost property in the mayhem.  At a time when their financial damages were being overlooked, Brainerd battled for their remuneration.  In doing so he set a major legal precedent, establishing municipal liability as a constitutional principal. 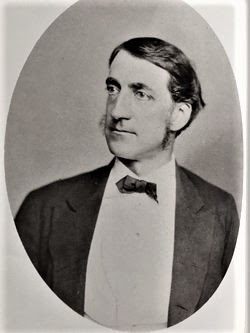 Cephus Brainerd - original source unknown
It was around this time that the Brainerds took in a boarder.  Cephus was the head of the board of directors of the New York YMCA.  He became "intimate and mutually influential friends with young Robert McBurney, who was appointed secretary of the association."  According to Allen Lessoff in his 2012 Fractured Modernity, "At this point in his career, he also moved in with his mentor Cephus Brainerd and his wife at 190 East Nineteenth Street, where he spent the next four years."
The Brainerds moved to Second Avenue in 1868, after which the house was operated as a high-end boarding house.  Its professional occupants throughout the next decade included merchant George Moore; Jacob Wilson (listed in directories as "inspector"); dry goods merchant Faust Strouse; Gustave Simon whose lace goods business was on Lispenard Street; and baker Jacob Stellwagen.
Maintaining the house as well-to-do boarders expected required a staff, of course.  An advertisement in the New York Herald on May 28, 1885 read, "Wanted--Two smart young girls to work in a boarding house.  336 East 19th st."
The house continued to be operated as a boarding house, then a rooming house, until 1921 when it was remodeled as a "studio dwelling," as described by the New York Herald.   It was at this time that an iron fire escape was tacked to the facade.  If the owner intended it to house artists' apartments, Maud Gilbert had other ideas.  She purchased the renovated property in November 1922 and it became home to the Vocational Adjustment Bureau for Girls.
The bureau had been organized in 1919 "to serve as a research and placement agency for the Big Sister organizations, and other welfare bodies concerned with the problem of the maladjusted girl," according to the United States Department of Labor's Personnel Research Agencies in 1930.   Girls between the ages of 14 and 30 were groomed to support themselves in the outside world.  It was no small task, however.
The Department of Labor explained, "About 60 per cent of the cases handled are below normal intelligence; a large percentage are emotionally unstable, some show psychopathic or neurotic tendencies, and some are delinquent."  Girls who had "subnormal mentality" were trained for factory work, for instance.  Those with mental problems were treated in the "therapeutic workroom" where they received psychological and sociological help. 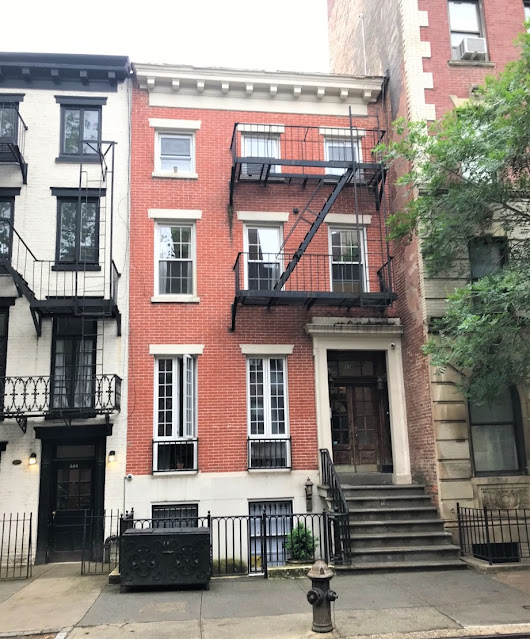 The Bureau remained in the house for years.  It returned to residential use in 1954 when a renovation resulted in a duplex apartment in the basement and parlor floor and two apartments each on the upper floors.  The duplex was divided into two apartments in 1974.
photographs by the author
no permission to reuse the content of this blog has been granted to LaptrinhX.com
Posted by Tom Miller at 1:16 AM