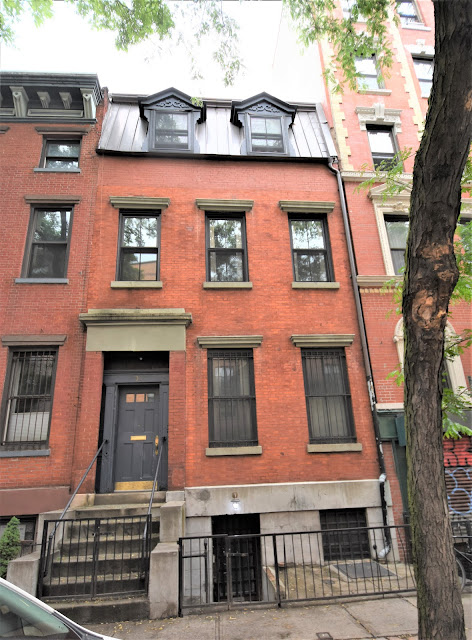 Ephraim H. Wentworth constructed a row of handsome Greek Revival homes along the northern side of East 2nd Street between Bowery and Second Avenue around 1835.  Faced in red Flemish bond brick and trimmed in brownstone, they rose two-and-a-half stories tall above basement level.  Solid stone wing walls flanked the stoops.
The first owner of 30 Second Street (the "East" designation would be added decades later) was grocery merchant Richard Williamson and his family.  It appears that in negotiating the purchase Wentworth offered to help rent the Williamsons' former home.  An advertisement on August 26, 1836 offered the three-story house at 220 Sullivan Street for lease and directed those interested to contact either Richard Williamson or E. H. Wentworth.
Richard Williamson & Co. was located at 19 Maiden Lane.  The term "grocery" had little to do with the word we commonly use today.  Williamson catered to the carriage trade, importing European wines and delicacies.  On a single day three separate ads appeared in the New York Evening Post, one touting "Rhenish Wines of the most approved growths and vintages," another announcing a shipment of "Mushroom Ketchup...of a superior quality," and the third advertising "Congress Water, in quart and pint bottles, in fine order, put up in boxes of 2 and 3 doz. each."
Williamson's business was apparently substantial.  On March 8, 1837 he announced the arrival of an enormous shipment of
champagne.  "1203 baskets of a very superior quality, landing from ship Ann, from Havre, for sale by the quantity, or otherwise."
By the mid 1840's the family of fancy goods merchant Samuel B. Isaacs lived in the house.  He struck out on a new venture in 1848 when he partnered with Adolphus S. Solomons to form Isaacs & Solomons, "for the purpose of carrying on the Stationery and Fancy Good business, and manufacture of Account Books."
In 1855 the family of James D. McMann moved in.  At the time he owned a livery stables on Mott Street, but by 1864 his profession was listed as "liquors" at 597 Broadway.  The nebulous term could mean he ran an upscale wine and liquor store, or a saloon.
Both of McMann's daughters, Catherine and Maria, were teachers.  Conveniently for them, they both taught in Public School No. 10 on Wooster Street.
At some point following the Civil War years the house was significantly updated.  The attic floor was raised to a full story in the form of a stylish mansard, an important element in the highly popular Second Empire style.  Although the Greek Revival entrance was preserved, the brownstone enframement was mostly removed, and pressed metal cornices were installed over the stone lintels. 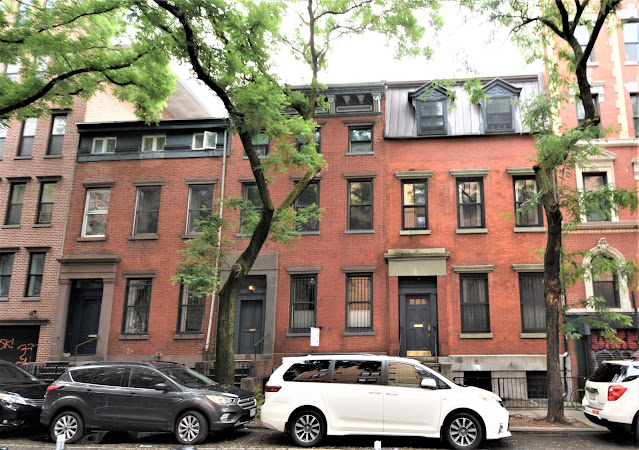 The house originally looked like 26 East 2nd Street, to the left.
The widow of Francois Fraprie, owned the house in 1873.  Born Abigail Lang in 1796, she had two sons, George and Stephen.  The Fraprie's first son, Francis Tarradin, had died in 1825 at the age of 11.   Stephen shared the house with his mother.  Never married, he was in the jewelry business at 16 John Street.
Abigail died in the house at the age of 86 on March 10, 1882.  Somewhat surprisingly, her funeral was not held in the parlor, but at the Church of the Nativity around the corner on Second Avenue.   Stephen remained in the house until his death at the age of 68 on December 16, 1889.
The George and Elizabeth Herrmann next occupied the house.  It was the scene of their daughter Tena's funeral on October 23, 1898. 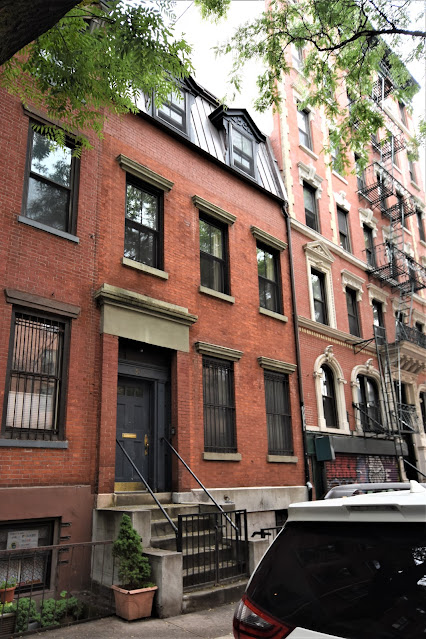 The once fashionable neighborhood declined in the 20th century.  A renovation to 30 East 2nd Street, completed in February 1949, resulted in small factory and office space in the former home.  Small businesses came and went until 2011 when the building was converted to a total of two apartments.
photographs by the author
no permission to reuse the content of this blog has been granted to LaptrinhX.com
Posted by Tom Miller at 2:36 AM