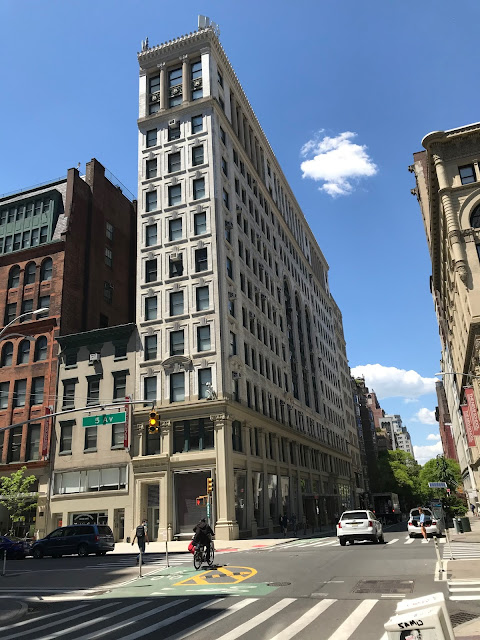 The commercial building which sat on the southwest corner of Fifth Avenue and 13th Street in the early first years of the 20th century was known as the Educational Building.  The name reflected the businesses inside, like the publishing firm of George A. Plimpton Company, and Dixon's Pencils.  George A. Plimpton owned the property.  On April 5, 1913 the Record & Guide reported that his firm "is having plans prepared by Charles A. Rich...for a thirteen-story office building" to be replace the older structure.
The new building, which took the name of its predecessor, was completed by the end of the year.  Its 26-foot-wide Fifth Avenue frontage engulfed the footprint of the 19th century residence that had once stood there.  Its 125-foot length and 12 stories gave it the skinny appearance known today as a "sliver" building.
Rich designed the structure in a quiet take on the Beaux Arts style.  A two-story limestone base featured double-height paneled Corinthian pilasters.  The mid-section was clad in beige brick and trimmed in stone.  Each of the openings sat within an architrave broken by a layered keystone.  Rich gave the 13th Street elevation added interest with three grand, five-story arches.  The two-story upper section featured three sets of double-height Corinthian columns--one on Fifth Avenue and two on the side street.  Decorating the spandrel panels between the columns were open book motifs, reflecting George A. Plimpton Company's business. 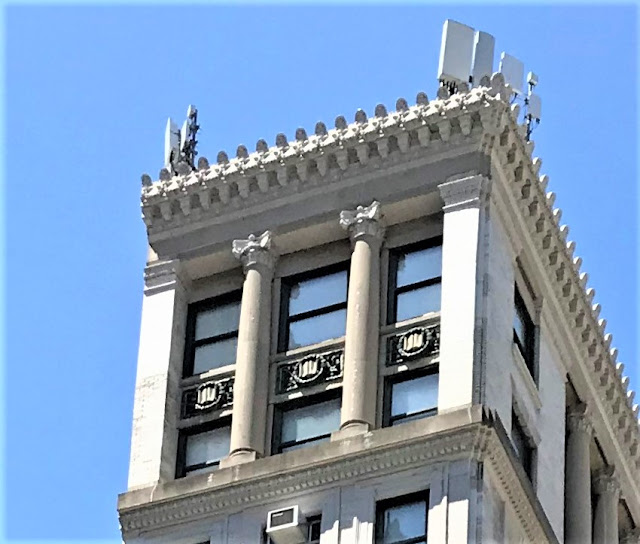 Initially, the tenant list following the educational theme.  Among the first to take space were the publishing firm Ginn & Co. (of which Plimpton was a member), The Pratt Teachers' Agency, and The Permanent Educational Exhibit Co.  Veering slightly away from the academic was Rudolph Kohler, who ran a rare coin business here.
But very quickly the tenor of the building changed to political and social reform organizations.  In 1914 the 10th floor was leased to the People's Institute, and by July the National Board of Censorship of Motion Pictures had established its offices in the building.
On July 17 The Evening World said of the latter, "The organization is credited with having accomplished much in the matter of purifying the movies."  The problem was that the board had jurisdiction only on American films.  Silent films from Europe caused the board's Commissioner of Licenses, George H. Bell, concern.  "I understand they are very questionable and objectionable," he said.
The trend continued as the Serbian Agricultural Relief Committee took space in 1915, joined the following year by related American Committee for American and Syrian Relief, The Fund for Starving Children, and the National Association for the Advancement of Colored People.  The NAACP, as it would be known, published the monthly magazine The Crisis, from 70 Fifth Avenue.
The polar political stances of the various tenants and the building's owner began to cause tension as war broke out in Europe.  Among the six organizations on the pacifist side were the Women's Peace Party and the Emergency Peace Foundation, both on the eighth floor.  Other tenants joined forces to pressure Plimpton to evict them.  Nearly 100 names were signed to a petition in April 1918 that said in part:

As tenants and employees of tenants of this building, 70 Fifth avenue, having a common and decent sense of patriotism and loyalty to our country, we, the undersigned, respectfully protest against the continued presence upon these premises of numerous so-called pacifist organizations whose activities and avowed purpose...to the interest of the enemy, have become a public scandal.

On April 18 The Sun reported that "the dove of peace" over the Educational Building "didn't have a feather ruffled yesterday."  The reason was, it said, because "George A. Plimpton, owner of the building, is friendly to the cause of peace."
Later that year Plimpton did find fault with a tenant.  The People's Council now occupied most of the seventh floor.  The pro-German organization published national propaganda from its offices, according to The New York Times, and was under investigation by Federal agents.  Plimpton "has ordered the organization to move on Oct 1., when the present lease expires," said the article.
Groups on both sides of the war issue continued to occupy the building.  On February 2, 1917 the American Neutral Conference Committee announced a mass meeting in Madison Square Garden at which William Jennings Bryan would speak on "A National Crisis--Shall we permit ourselves to be forced into war?"  The notice said, "This meeting is for those who favor peace at home and abroad, not by force but by negotiation."
On the opposite side of the fence was the American Committee on War Finance.  Just a month later it headlined a full-page advertisement "To All Loyal Americans--Will YOU Stand by YOUR Country if War Comes?"
As the war drew to a close the National Civil Liberties Bureau took space in the building.  In May 1918 it published a pamphlet, "The Truth About the I. W. W." in which it lent support to some of the members of the labor organization, the International Workers of the World.  It said in part, "Many I. W. W. unions have been loyally serving the country during the war, particularly in loading ammunition and war supplies on the docks."  The Socialist-based group was notorious for its use of violence in labor disputes, however the pamphlet assured, "Violence has been much more commonly used against the I. W. W. than by it."
The National Civil Liberties Bureau soon had to focus attention on its own defense.  On September 1 that year The Sun headlined an article, "U. S. Agents Digging In Pacifists' Lairs" and reported, "This organization, it developed, was one of several in the building at 70 Fifth avenue which has been giving active aid to young men who feel indisposed to do military service."  Federal agents had taken over three offices  within the building the day before--the National Civil Liberties Bureau, the New York Bureau of Legal Advice, and the law office of Walter Nelles.
The May 1919 issue of The Crisis included an article "related to prejudice alleged to have been shown toward American negro officers in France by white officers," according to its editor, W. E. Burchardt du Bois.  It included an order dated August 7, 1918 which said in part:

We must prevent the rise of any pronounced degree of intimacy between French officers and black officers.  We may be courteous and amiable with these last, but we cannot deal with the on the same plane as with the white American officers without deeply wounding the latter.  We must not eat with them, must not shake hands or seek to talk or meet with them outside of the requirements of military service.

The United States Government, it seems, felt that exposing the order might create international tensions.  On May 2 the New-York Tribune reported that The Crisis office had received notice from the Post Office Department "that their May issue of 100,000 copies was being held up in the mails pending a report from Washington."
The NAACP faced a staunch opponent in the Nights of the Ku-Klux Klan.  On January 2, 1921 the New-York Tribune reported, "A reorganized Ku-Klux Klan, with branches already established throughout the South, has invaded the North with the avowed intention of becoming a national fraternal order.  A den has been projected for New York City."
Imperial wizard William Joseph Simmons refused to comment, but the NAACP was already on the case, using an undercover operative.  The New-York Tribune said, "Doubtless there will be some surprise for Colonel Simmons when it is brought to his attention that the first definite information concerning the proposed New York den came through confidential correspondence of the Klan with an official of the National Association for the Advancement of Colored People, whose headquarters are at 70 Fifth Avenue."  The article explained, "Posing as a white man interested in the formation of a local den an association official arranged to have his name submitted for membership in the Klan."
The NAACP was busy on several fronts at the time.  When 11 Blacks were slaughtered in Georgia by whites "practicing the peonage [i.e. involuntary service] system," according to the New York Herald on April 4, 1921, Governor Hugh M. Dorsey wrote the the NAACP.  He promised his support, but added, "The Governor, as you know, has no jurisdiction.  All he can do is to try to bolster up the officials elected by the people."
The atrocity in Georgia paled to the genocide committed in Tulsa, Oklahoma less than two months later.  Known at the time as the Tulsa Race Riots it was in reality a massacre.  An entire Black community was obliterated, as many as 800 people were hospitalized, and 6,000 interned in large facilities.  The Oklahoma Bureau of Vital Statics placed the number of dead at 36, but the NAACP pushed back on the numbers.
In a statement on June 2 it said in part:  "White people often attempt to conceal the number."  It went on to say, "The first report from Tulsa indicates a terrible use of the modern instruments of war, airplanes, automobiles and guns used by white Americans upon their colored neighbors."
The National Board of Censorship of Motion Pictures, now known as the National Board of Review, was still in the building, although somewhat overshadowed by its the more visible tenants.  It published an annual catalog entitled, "The Best Motion Pictures for Church and Semi-Religious Entertainments."
Other tenants throughout the 1920's included the West Virginia Miners' Relief Committee, the Church Peace Union, the National Child Welfare Association, and the offices of at least three architects--Anthony F. Kimball, Roderick B. Barnes, and Frank Arnold Colby.
By the early 1930's the publishing firm of James T. White & Co. was in the building.  It was perhaps best known for its National Cyclopedia of American Biography.  It was joined in the Educational Building around 1938 by Prentice-Hall, Inc.  And in 1956 Forbes, Inc. took three floors.
The 63-year-old Mills College of Education owned 70 Fifth Avenue and 66 Fifth Avenue in 1972 when officials announced hopes "that Mills will ultimately become a subdivision of the New School," as reported by The New York Times on September 3.  The New School of Social Research had already agreed to take over the mortgage charges of the two Fifth Avenue buildings.  Within the year the New School had acquired the properties.
In 1998 the New School leased the 2,000-square-foot retail store to Posman Books.  It was a good fit, according to a spokesperson for the school.  "We have seven colleges now, in the Village and around Manhattan, and we didn't have our own bookstore."
A renovation completed in 2006 for The New School and the Shelia C. Johnson Design Center of the Parsons School of Design.  Although the building was not yet landmarked (that came in 2021), Charles A. Rich's striking exterior was left almost pristinely intact.
photographs by the author
no permission to reuse the content of this blog has been granted to LaptrinhX.com
Posted by Tom Miller at 1:52 AM