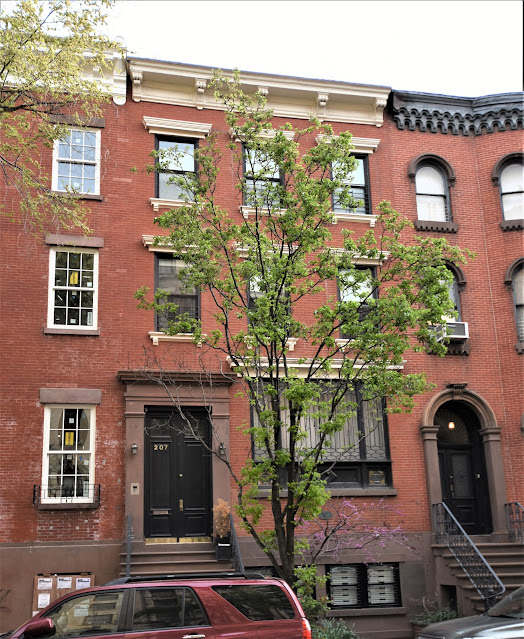 In 1855 Samuel Schiffer moved his family into the newly-built house at 106 East 17th Street (renumbered 207 in 1865).  Three stories tall, the 23-foot wide residence was faced in red brick and trimmed in brownstone.  Overall Greek Revival in style, the architect had borrowed the full-height third story, the bracketed cornice, and the handsome ironwork from the Italianate style.
Schiffer was the principal in the wholesale grocery and commission firm of S. Schiffer & Nephews.  An inventory of the house hints at the luxurious decorations and furnishings.  Included were a "seven octave rosewood Piano," rosewood and walnut parlor and bedroom suites, "Turkish lounges," bronzes, paintings and etageres.
In 1871 Schiffer and his wife augmented their domestic staff.  An advertisement in the New York Herald sought, "A young girl to make herself generally useful, in a house where there are two other servants."
Schiffer sold the East 17th Street house to Abraham H. Hummel in 1873.   The bachelor lawyer brought with him his parents, his brother Mitchell, and sisters Bertha and Sophia.
Moses Hummel had been a peddler in Boston where Abraham was born in 1850.  He and his wife, Hannah, brought the family to New York, where Abraham attended Public School No. 15 on East 5th Street.
At the age of 13 Abraham had become an office boy for attorney William Frederick Howe.  It would result in an unlikely partnership and an infamous chapter in New York City legal history.  Howe, who was British by birth, had opened his New York law office in 1854, after having served a prison sentence in London for conspiracy to pervert the course of justice.
Howe took an immediate liking to the boy.  In 1908 New York Assistant District Attorney Arthur Train recalled, "Hummel's preceptor took a fancy to him from the start, and from that time until his death always called and referred to his diminutive ally as 'Little Abey.'"  Howe groomed him in law, and pushed to have him admitted to the New York Bar in 1869 at the age of 19.  The two formed a partnership, Howe & Hummel.
Moses died in the house on November 14, 1875 at the age of 64.  A "friend" (almost assuredly Howe) published a "tribute of condolence" in the New York Herald, which was as much an accolade to Abraham as to his father.  It said in part:

He had been an invalid for a long period, during which time his affectionate son Abe had ministered to him with true filial love and never dying affection.  He was much respected by a large circle of endeared friends, who now mourn his loss.

The tribune offered condolences to all the family members, including "the Samaritan Abe H. Hummel."  Moses's funeral was held in the parlor on November 17.
By 1876 Sophia had married and moved out, Bertha was teaching in the Primary Department of Grammar School No. 19 on East 14th Street, and Mitchell was associated with the prominent clothier Hammerslough Brothers.
Abraham was becoming well-known not only in New York, but throughout the nation.  Howe & Hummel made a specialty of finding legal loopholes to obtain the release of murderers, thieves, brothel owners and gangsters.  The firm kept no books, requiring that payments be paid in cash.  According to Arthur Train in 1908, "as fast as the money was handed over they stuffed it in their pockets.  At five o'clock daily the firm adjourned to a near-by saloon, disgorged, and 'divvied.'"
District Attorney William Travers Jerome would call the firm "for twenty years a menace to the community," and decades later it prompted books like the 1947 Howe & Hummel: Their True and Scandalous History and the 2010 Scoundrels in Law: The Trials of Howe & Hummel.  The National Police Gazette included both men in its 1891 Hall of Fame edition (which was not an honor). 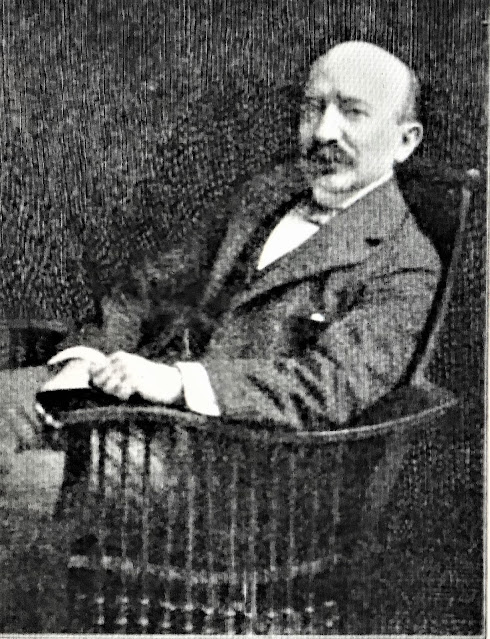 Abraham H. Hummel.  Cosmopolitan, May 1908 (copyright expired)
On January 17, 1891 the New York Herald reported, "The funeral of Mrs. Hannah Hummel, widow of Moses Hummel and mother of Lawyer Abe Hummel, was held at the home of her son, No. 207 East Seventeenth street, yesterday morning."  The Reverend Dr. Gottheil of the Temple Emanuel officiated.  "Dr. Gottheil eulogized Mrs. Hummel, referring to her many noble traits of character and her brilliant attainments.  The coffin was covered with flowers and the house was crowded by friends and relatives."
There would be another funeral in the parlor two years later.  Mitchell contracted pneumonia in the fall of 1893, and died in his room on September 27.
Abraham Hummel sold the house in December 1897 to sculptors Thomas Ball and William Couper.  The New York Times reported that they "will occupy the building as a studio after the completion of alterations."
Hummel moved into a grand home, steps from Central Park.  His famed career would come to a crashing end a few years later.  Howe died in 1902 and in 1907 Hummel was convicted on charges of conspiracy and subordination of perjury in the notorious Dodge-Morse divorce case.  He was sentenced to a one-year term on Blackwell's Island.  The New York Times said, "As sensational in defeat as in victory, Hammel [sic] gave a grand farewell dinner at his mansion at 52 72nd street, just off Fifth avenue, attended by many friends."
After his release he "expatriated himself, keeping his self-imposed exile in Europe," as later worded by The New York Times.  He died in London in January 1926.  His death was not reported for a week, an Associated Press release explaining he had directed, "I don't want publicity when I die; I have had enough in my life."
In the meantime, Ball and Couper made renovations to the house to create an art studio.  The exterior was left almost untouched, other than a striking leaded studio window which replaced the two parlor openings.  No stained glass was used, allowing natural light to flood in. 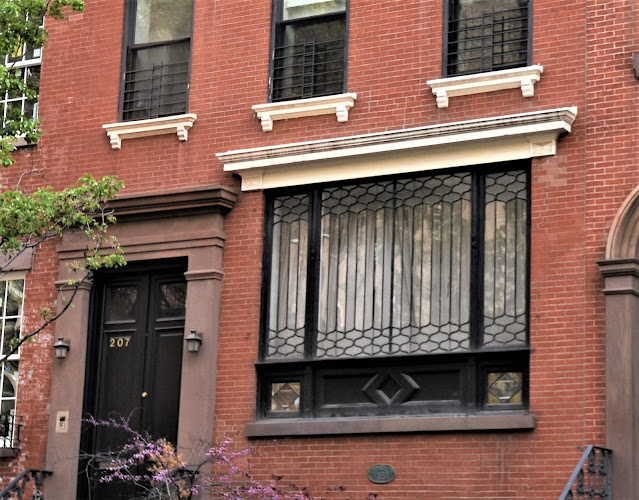 Born in 1853, William Couper had just arrived in New York after having studied and worked in Europe for 22 years.  He was known as a portraitist, creating busts in the "modern Italian manner," according to The National Cyclopaedia of American Biography in 1907.  Thomas Ball was older, born in 1819, and created more monumental works.  Among his significant works were the statue of Henry Clay for the United States Senate in 1858, the statue Daniel Webster placed in Central Park in 1868, and the equestrian statue of George Washington in the Boston Public Garden.
In 1907 sculptor Chester A. Beach returned to America after studying at the École des Beaux-Arts in Paris.  Couper and Ball leased a portion of 207 East 17th Street for his studio, and he moved family moved into the upper floors.  Later that year Beach won the Barnett prize for sculpture at the National Academy of Design's exhibition.
In 1913 Charles Beach exhibited his The Unveiling of Dawn at the groundbreaking Armory Show in the 69th Regiment Armory on Lexington Avenue.  That same year, on November 13, the New York Evening Telegram reported, "Chester Beach, a sculptor, who has a contract for much of the statuary to be used at the San Francisco Exposition, has purchased a studio building, No. 207 East Seventeenth street."  The Record & Guide added, "The house, which was formerly the home of Abraham Hummel, the lawyer, will be used by the buyer as a studio for work on some heroic groups."
Thomas Ball had died in 1911, perhaps prompting Couper and his wife, Elizabeth, to liquidate the property for estate purposes.  He nevertheless, continued to use the studio at least through 1918.  Beach leased space to other sculptors over the coming years, including Amory C. Simons, Berenice Langton and Walter Hancock.
Hancock was born in Philadelphia and in 1925 won the Prix de Rome, a prestigious art scholarship created in 1663 under the reign of Louis XIV.   Although he lived in New York, he remained a member of the Art Alliance of Philadelphia.  That affiliation put him in a most difficult position.
Antonio Salemme was "one of New York's most highly regarded young sculptors," according to The New York Age on May 31, 1930.  He had created a "huge black bronze figure of Paul Robeson, Negro actor and singer, who, according to London cables, has achieved an unprecedented success in England in 'Othello,'" said the newspaper.  Salemme had entered his Robeson statue into the biennial Philadelphia Art Alliance exhibition, but it was refused.
Salemme received a rejection letter, "written by Walter Hancock of 207 East 17th Street, New York."  It explained in part:

A very difficult situation has arisen regarding your beautiful statue of Paul Robeson, which the Sculptors' Committee of the Philadelphia Art Alliance was so eager to have for the exhibition in Rittenhouse Square.  It did not, of course, occur to us that there would be any objection to showing a nude figure of a well-known person.  The executive committee, however, expressed their apprehension of the consequences of exhibiting such a figure in a public square, especially the figure of a Negro, as the colored problem seems to be unusually great in Philadelphia.

Beach's daughter, Nathalie, was artistic, as well.  She studied at Le Grand Verger and the Villa Brillantmont in Lausanne, Switzerland, and then at the National Academy of Design.  She was married to John Ellis McLaury in the house-studio on January 30, 1937.  The New York Times commented, "Her father is a well-known sculptor." 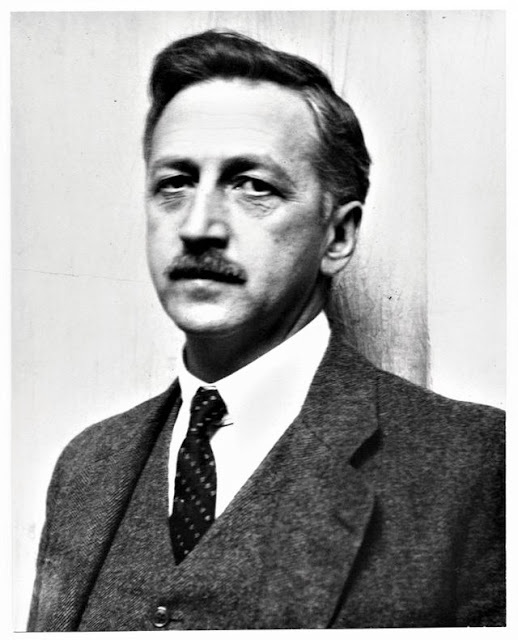 Chester A. Beach (original source unknown)
Indeed he was.  His works were annually exhibited at the National Academy of Design, he was president of the National Sculpture Society in 1926-27, and taught at the Beaux-Arts Institute of Design.  He repeatedly won awards for his sculptures and medallions.
In the summer of 1947 Charles And Eleanor Beach were at their country home, Oldwalls, in Brewster, New York.  Charles died there on August 7 at the age of 75.  It is unclear how long Eleanor remained in the East 17th Street house.
A renovation completed in 1970 resulted in two duplexes.  The configuration lasted until 2013 when a penthouse, unseen from the street, was added, creating a triplex on the topmost floors. 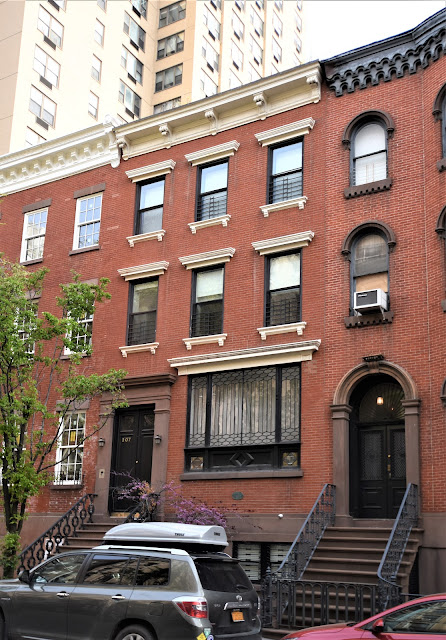 The picturesque house with its amazing history is remarkably preserved after two well-known American artists installed the striking leaded glass window nearly 115 years ago.
photographs by the author
no permission to reuse the content of this blog has been granted to LaptrinhX.com
Posted by Tom Miller at 1:34 AM