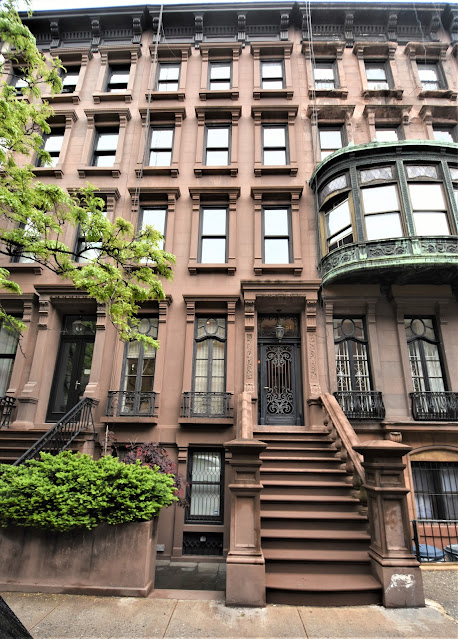 In January 1885 architect John Sexton filed plans for seven four-story brownstone houses on the north side of West 71st Street, between Columbus Avenue and Central Park West.  The 19-foot-wide homes would cost the developer, Owen Donahue, $12,000 each to construct (about $329,000 today).  Donahue may have run into financial problems, because before the project was completed his builders, George and Andrew Crawford, had title to the properties.
Although the row was completed in 1886, the Crawfords retained possession of 51 West 71st Street until August 1890 when they sold it to George E. Stedman the equivalent of $1.1 million today.
The house was identical to the other six along the row.  Designed in the neo-Grec style, its openings sat within architrave frames, each having a molded cornice and bracketed sills.  Identical pressed metal cornices graced each house along the row.  If Stedman lived in the house at all, it was only for a short period.  By the mid-1890's it was home to the Maximillian Weil family.
Born in 1843, Max Weil and his wife, the former Gertrude (known as Gertie) Williams, had three children, Hilda, Minnie B., and Max Sanford.
The year 1897 began with the family making plans for Hilda's upcoming wedding.  The focus turned to Minnie, however, as she fell seriously ill.  The 25-year-old died in her bedroom on February 2 and her funeral was held in the drawing room three days later.
Rather shockingly, Hilda's wedding plans went on and she was married to John Taussig in that same room two months later, on April 7.  The New-York Daily Tribune remarked, "Because of a recent death in the bride's family, only relatives and personal friends were present to witness the ceremony."  Afterward a "wedding dinner" was served to those present.
Young Max graduated from New York University in 1903 where he had been on the varsity tennis team.  The family remained at 51 West 71st Street for just three more years, selling it to Thomas J. McLaughlin in May 1906.
McLaughlin most likely gave them an offer they could not refuse.  He simultaneously purchased 49 and 47 West 71st Street and hired architect C. B. Brun to remodel the three adjoining homes.  The middle house of the trio was made the true centerpiece with a spectacular copper-clad oriel at the second floor 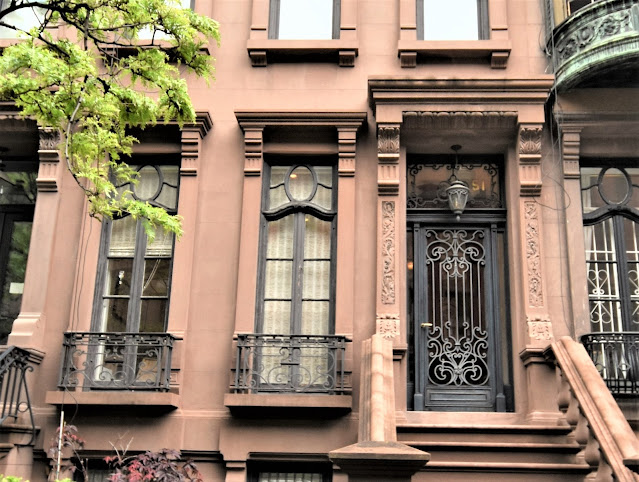 As with the other two, Brun replaced the parlor windows of 51 West 71st Street with full-length French windows that opened onto Juliette balconies.  The entrance was given an ornate French grilled door.  His renovations completed, McClaughlin advertised the house on February 23, 1907:

Only five days later the New-York Tribune announced that McLaughlin had sold 51 West 71st Street.  "This completed the sale of the three adjoining houses bought and extensively remodelled by Mr. McLaughlin," it added.
The new owners were the Reverend John Henry Watson and his wife, the former Susan Matilda Hoffman.  Born in Boston, Watson was a Harvard graduate and received his divinity degree at the Berkeley Divinity School in Middleton, Connecticut.  Susan had significant religious ties, as well.  Her father was Rev. Eugene Augustus Hoffman, the dean of the General Theological Seminary.  (When Dean Hoffman died in 1902 he left an estate to about $460 million in today's money, the bulk of which was divided among his widow and four children.)
The Watsons had two sons and a daughter.  By the time they moved into the 71st Street house Watson had given up his parish work to devote all his time to missions in the city.
On September 30, 1913 Watson suffered a fatal heart attack in the house at the age of 68.  The following year, in November, the house was opened for inspection prior to the auction of the  house and its contents.  The two day auction was handled in part by Silo's Fifth Avenue Art Galleries who took charge of "the art collections and period furniture," according to the New York Herald on November 13.
By the early 1920's 51 West 71st Street was home to the Louis Krohnberg family.  A partner in the Eureka Dress Company, Krohnberg also made money in a less upstanding way--poker.  It resulted in a well-publicized law suit in January 1920 when the Commissioner of Charities, Bird S. Coler, charged Krohnberg with cheating.
Coler claimed he and others had lost a total of $350,000 during poker games--an astounding $4.47 million today--to Krohnberg.  Alleging that Krohnberg "used markers," he sued for $1.75 million, five times the amount lost, promising to turn it all over to charity.
Louis's wife appeared in newspapers for more respectable reasons.  On May 26, 1922, for instance, The New York Times reported, "Mrs. Louis Krohnberg entertained at a luncheon at her home, 51 West Seventy-first Street, yesterday for her niece, Miss Florence Krohnberg, who is to be married at the Astor Hotel on June 20.
In 1941 the house was renovated to apartments and furnished rooms.  A subsequent remodeling, completed seven years later, resulted in a total of nine apartments; and a final renovation in 2009 joined the basement and parlor floors into a duplex. 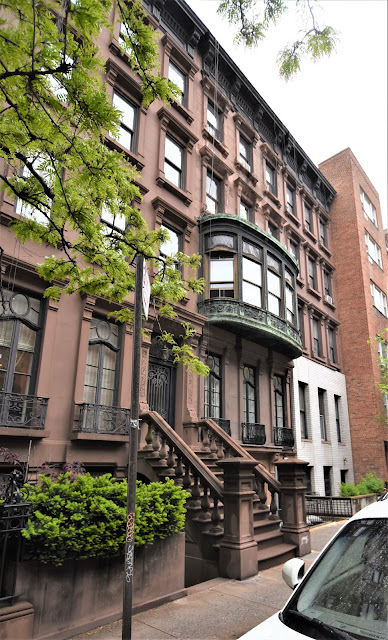 Of the three homes Thomas J. McLaughlin remodeled in 1906, 51 West 71st Street has fared the best, retaining its stoop and crisp neo-Grec details.
photographs by the author
no permission to reuse the content of this blog has been granted to LaptrinhX.com
Posted by Tom Miller at 1:12 AM