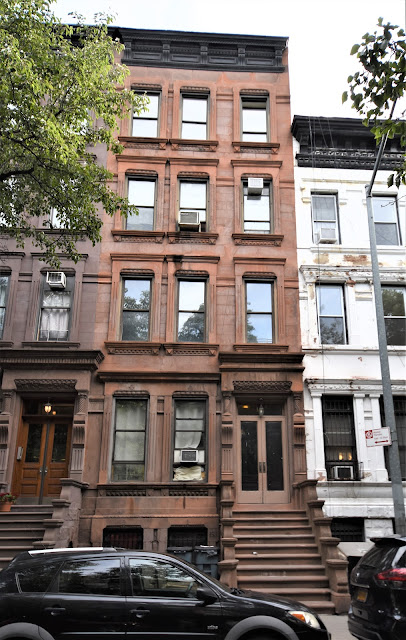 The architectural firm of Thom & Wilson was noted for designing rows of speculative residences, mostly on the Upper West Side.  The projects most often included several creative designs which played off one another to create a harmonious string.  And so it is surprising that the eight brownstone-fronted houses Thom & Wilson designed for developer William H. Hall in 1890 were rigidly identical.
Each of the carbon copy homes along the north side of West 78th Street, between Columbus and Amsterdam Avenues, were four stories tall above high English basements.  A blend of Renaissance Revival and neo-Grec styles, the 20-foot wide residences featured windows with architrave frames, molded cornices, and bracketed sills decorated with a row of angular bosses.  Rather than railings, stair-stepped wing walls flanked the stoop which rose to the double-doored entrance.  Here miniature spiral-carved columns sat upon fluted brackets.  They upheld a hefty two-part entablature embellished with Renaissance style carvings. 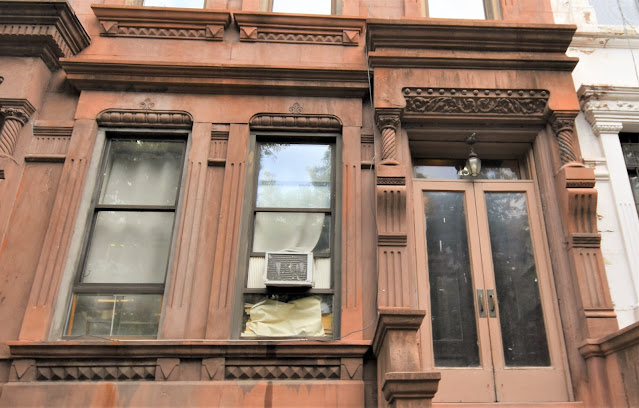 The eastern-most of the row, 153 West 78th Street, was initially purchased by Charles H. Parsons.  He was the principal in the musical instrument business of Charles H. Parsons & Co. at 292 Broadway and a member of the musical organization the Euterpe Society.  He was, as well, a director of the New York and New England Railroad Company and divided his time between New England and New York.  The Evening World remarked on August 31, 1892 that he was "prominent in New England affairs.
Parsons's residency in the 78th Street house would be relatively short-lived.  He sold it in January 1893 to Esther Moss Herts, the widow of antiques furniture dealer and auctioneer Henry Benjamin Herts, who had died in 1884.
Henry and Esther (who went by Belle) had been married in 1852 and had eight children, Isaac H., Benjamin Henry, Abraham H., Maurice, Jaques, Sophie Rose, Minnie, and Henry B.  (Importantly, in 1876 Isaac and Benjamin had formed Herts Brothers, by now one of the foremost furniture designing and interior decorating firms in America.)
Living with Belle in 153 West 78th Street was her unmarried son, Maurice, who enjoyed the life of a wealthy bachelor.  A few years earlier, in June 1889, he organized an impromptu and "very pleasant entertainment," as described by The Evening World, aboard the White Star steamer Britannic.  The high-end program was for the benefit of the Sick Babies Fund in New York.
He quite often appeared in society pages with his siblings.  On July 10, 1898, for instance, the New York Herald reported, "Mr. and Mrs. B. H. Herts and family, of No. 16 West Seventieth street, and Mr. Maurice A. Hertz [sic], of No. 153 West Seventy-eighth street, are spending the summer at Long Beach [New Jersey]."  Herts was active in the Upper West Side community and served as vice-president of the West End Club.
Like all the well-to-do families along the block, the Hertses maintained a domestic staff.  On September 18, 1900 an advertisement for a "young girl as first class cook in a small family" appeared in the New York Herald.  Belle was offering a salary of $22--around $175 per week today.
Belle M. Herts died on December 30, 1905.  Just over a year later, in February 1907, Maurice sold 153 West 78th Street to Dr. Howard Gillespie Myers and his wife, the former Antoinette Darwood. 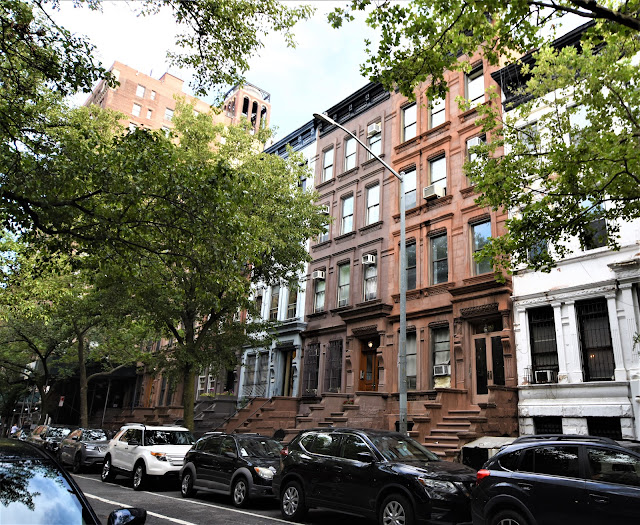 Born in Port Byron, New York in 1862, Myers was an active member of The Prohibition Party.  He and Antoinette had two daughters, Dorothy Kenyon and Constance.  Moving in with the family was Antoinette's father, retired Methodist minister William McKendree Darwood.
Darwood had had a fascinating career.  He arrived with his parents from the Isle of Ely, England, at the age of 14 in 1849, and received his divinity degree from Baker University in 1887.  The Christian Advocate said of him:

During his ministry he held about one hundred and forty-five weeks of special revival services, during which more than a thousand souls were converted and added to the church.  When in his prime he was greatly in demand at camp meetings.  He preached in probably more churches in New York city than any other minister, having visited almost every Methodist Church on Manhattan Island.

The family was at Little River, Connecticut in 1914 when William McKendree Darwood died "suddenly" on April 27 at the age of 79.  His body was brought back to New York where his funeral was held in the 78th Street house three days later.
A much more joyous ceremony took place in the parlor four years later.  On June 10, 1918 Dorothy's engagement to Lt. Carl Ober Sayward of the Infantry Reserve Corps was announced.   Dorothy had graduated from Barnard College in 1916 and now held a position in the research laboratory of the Department of Health.  The wedding took place in the 78th Street house on September 21 that year.  Constance was her sister's only attendant.
At the time Constance was a junior at Vassar College at the time.  She graduated in 1919, and on January 27, 1925 her engagement to Dr. Arthur Forrest Anderson was announced in The New York Times.  The article noted, "The wedding will take place in the late Spring."  But this ceremony would not take place at 153 West 78th Street.  Howard Myers sold the property early in March.
Initially the house was operated as a boarding house.   Jessie Adeline Cameron, a stenographer, lived here in 1926 when she was married to Arthur Percy Lait.  The name of another resident, Thomas Harding, appeared in newspapers that year for much graver reasons.
Harding was a delivery driver for the James Butler, Inc. chain of stores.  On the afternoon of October 11, 1926 he and another employee, Michael Mulryan, were returning on the Staten Island Ferry after making a delivery.   As the boat neared the Brooklyn slip, Harding asked Mulryan to crank the truck's motor to start the engine.  The Daily Star reported:

Mulryan braced himself on the swaying deck and turned the crank handle several times.  Finally with a roar the motor spun.  The truck started with a jerk and while scores of horrified passengers watched Mulryan was crushed between its blunt-nose and the guard rail.

The 24-year-old was dead when the ambulance arrived.  The article said, "Harding, heartbroken, was arrested on a charge of homicide.  The police accuse him of throwing off the brakes of the truck before Mulryan had a chance to get out of the way." 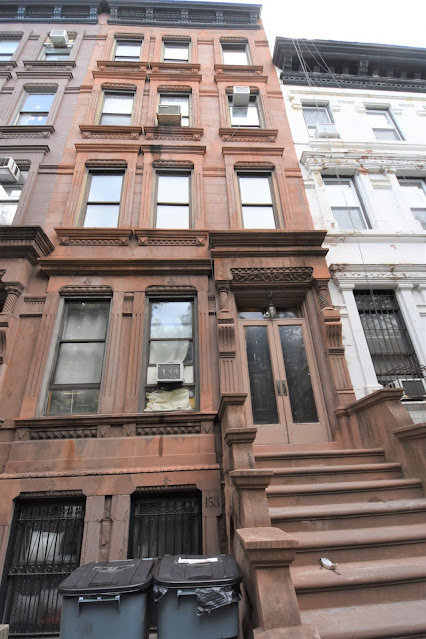 In 1938 the house was officially converted to apartments, two per floor.  That configuration lasted until a renovation completed in 2009 added a penthouse level unseen from the street.  The addition made two duplex apartments possible in the fourth floor and penthouse levels.
photographs by the author
no permission to reuse the content of this blog has been granted to LaptrinhX.com
Posted by Tom Miller at 1:21 AM