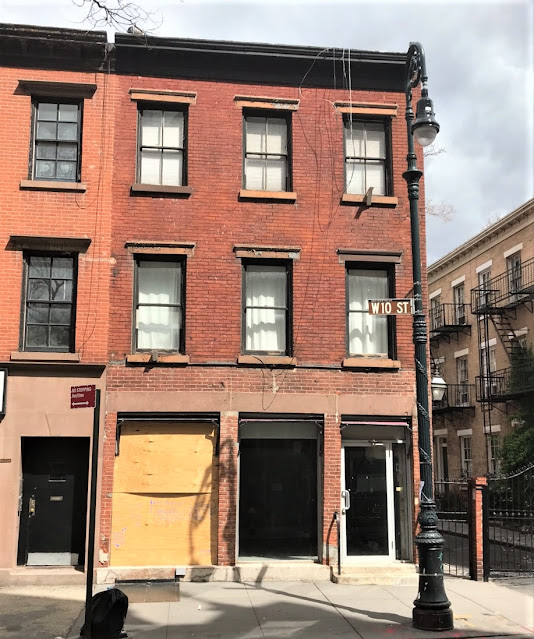 When Samuel Milligan purchased a section of the former Sir Peter Warren farm in 1799, Greenwich Village was a rural hamlet.  But by 1835 the population had rapidly increased, caused greatly by the influx of New Yorkers fleeing the yellow fever epidemic.  That year Milligan sold four plots on Amos Street (later West 10th Street) to his son-in-law, Aaron Darwin Patchin.  The two men would work together developing their plots, with Patchin the land surveyor.

In 1848, a year after Samuel Milligan initiated construction on Patchin Place--ten working class houses on a short cul-de-sac branching off of Amos Street--Aaron Patchin extended the project by erecting four houses-and-shops of his own at the entrance to Patchin Place.
Completed in 1850, the corner house was originally numbered 13 Amos Street.  Identical to the other three, it contained a store at sidewalk level and two stories of brownstone-trimmed brick above.  Patchin may have used style books in designing the row.  The understated elements were influenced by the current Greek Revival style.
The upper floors became home to Mary Bretell, the widow of Edward C. Bretell.  Edward had been a smith, and now Mary made a living selling or making "bellhangings."  Her adult son, Edward, Jr., originally lived around the corner at 2 Patchin Place, but in 1855 had moved in with his mother.   It was possibly his failing health that prompted the move.  He died here that same year at the age of 49.
Apparently Edward Bretell's brothers, Francis and George, were in the lock business with him.  In 1856, the year after his death, both men (along with George's wife) moved in with their mother.  The following year the business, located at 198 Wooster Street, was named Bretell & Brother.
In the meantime, the store had been the butcher shop of Isaac Evans.  In 1856 it was taken over by John E. Recke for his grocery store.
In 1864, with Civil War raging, the population of 113 West 10th Street had decreased by one.  Sarah Bretell was now listed in directories as "widow of George."  And, interestingly, Francis is no longer listed here in 1867.  Mary and Sarah would remain in the house through 1873.
By then Dederick F. Recke had taken over his father's grocery store.  The long tradition would continue when Henry Ludermann moved his grocery in in 1886, followed by William P. Maack.
Maack became fascinated with hot air balloons in the early 1890's, prompting the New York World to comment that his "ascensions [are] frequent in the neighborhood of Jefferson Market."  On July 9, 1893 the newspaper entitled an article, "Mr. Maack Is A Balloon Crank" and announced, "about 9 o'clock tomorrow night he will send skyward one seventeen feet tall inflated with gas."
The article said he had started his experiments on the Fourth of July with a 13-foot tall balloon that carried a red lantern.  His second trial ended disastrously.  On July 7 he announced he would sent another balloon skyward at 9:00.  "An hour before the appointed time the corner of Greenwich and Sixth avenues was crowded," said the New York World.  But high winds foiled the flight, driving the balloon "against a telegraph wire" where it was "consumed by fire."  Undaunted, Maack sent for a second big balloon and within two hours the crowds were rewarded as it rose above Greenwich Village.
Maack's aeronautical experiments sparked his creativity.  The New York World reported, "It is also proposed in the near future, when the breezes get stirring enough, to send up a monster kite from Patchen [sic] place ornamented with lanterns."
Samuel Mulligan's extensive real estate holdings were liquidated at auction in May 1896.  The family was apparently not eager to relinquish the charming Patchin Place, however, and on May 14 The New York Times reported, "Mrs. Patchin and Mrs. Dorsheimer obtained at $81,000, the property at 113 West Tenth Street, and the land and buildings in Patchin Place."
Mark Alter lived at 113 West 10th Street at the turn of the century and ran his law practice from the address.  He remained at least through 1908.
The space was still a law office in the 1930's, but it was much less respectable than Alter's.  Jesse Jacobs' office was a meeting place for organized gangsters.  It played an important part in courtroom testimony of Peter Balitzer in 1937.  He described a meeting here two years earlier.  Colorful names like Tommy Bull, Hungarian Helen and Gypsy Tom were mentioned, along with familiar names like Davie Betillo, Jimmy Fredericks and Abie Wahrman.
Balitzer testified in part, "Well, another argument come up about the joints again.  They said the bookies were positively holding out joints; that there was about 30 joints that were off the list, that they have no accounting for." 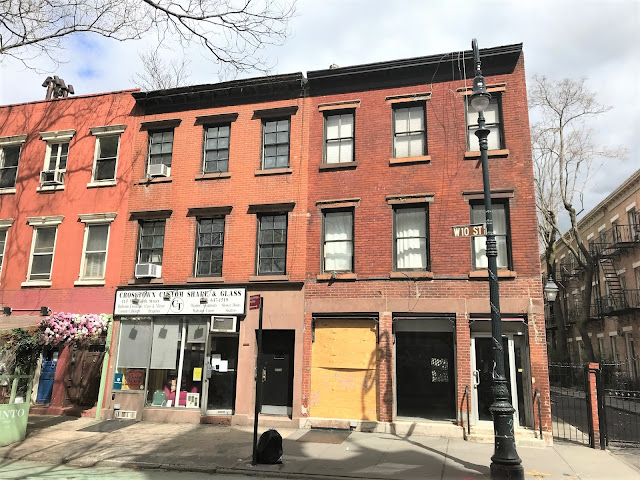 More respectable during the second half of the 20th century were the tenants of the store space.  In the 1960's it was home to the Washington Square Book Shop, and in the 1970's to The Mad Monk.   That store sold one-of-a-kind pieces like hand-thrown pottery.  Most recently the space was The Common Ground, a Native American and African Art shop.
photographs by the author
LaptrinhX.com has no authorization to reuse the content of this blog
Posted by Tom Miller at 1:16 AM