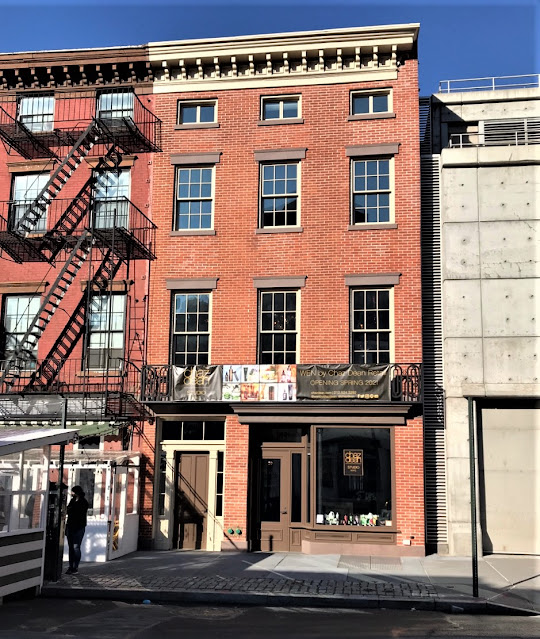 The common cornice of 57 and 59 Greenwich Avenue was updated later in the 19th century.
In the 17th century Sand Hill Road, sometimes known as Monument Lane, followed an earlier Native American trail.  The name was changed in the last years of the 18th century to Old Greenwich Lane and renamed again in 1843 as Greenwich Avenue.  By then Greenwich Village was greatly expanding and development was taking place along the avenue.

In 1844, the year after the name change, attorney and saw mill owner William Van Hook began construction of two speculative houses at 57 and 59 Greenwich Avenue.  Completed the following year, they both most likely always had a store at street level.
Like its neighbor, 59 Greenwich Avenue was faced in brick and rose two-and-a-half stories above the store.  The attic level, as with all Greek Revival style structures, featured squat windows under a flat roof; a spatial improvement over the peaked roof with dormers of the earlier Federal style.
Living here in the late 1860's was the family of Thomas Roberts.  When the Metropolitan Fire Department was organized in 1865, the 26-year old Roberts became a professional fire fighter.  (He had, no doubt, been a volunteer previously.)  He and his wife had two children.
At 7:45 on the evening of October 24, 1869 a fire broke out in the stables of Dodd's City Express on West 28th Street.   It was a large concern, housing between 40 to 50 horses and numerous wagons. Engine Company No. 14 responded, with Thomas Roberts, who was Assistant Foreman, riding on the tender.  As it approached the blaze, according to the Evening Post, Roberts "leaped to the ground while the tender was in motion, in order to get possession of a fire plug at the corner."  What the newspaper deemed a "melancholy accident" followed.
The New York Herald reported, "His foot caught in a strap and he fell to the pavement, the wheels of the tender passing over his head."  He was killed almost instantly.  His fellow fire fighters later called him "an efficient and faithful officer."
The house and store saw a succession of residents.  At the turn of the last century J. D. Steffens lived above his confectionary store.
Residing here in the post World War I years was Lawrence Gibson, who saw the world through artistic lenses.  His contemplative letter to the editor of The Evening World was published on August 9, 1922:

The statue of Gen. Sherman by St. Gaudens was before me in Central Park to-day when I noticed a dead horse in the street.  I was struck by the fact that the carcass retained no semblance of life, no grace, no form, it was nothing but a meaningless hulk.  Then I glanced up to the St. Gaudens statue.  Here was, seemingly, life.  The horse was vibrant, tense.  And yet both horses, the dead one and the statue, were clay.

No less artistic was Horace Gregory, who established the unusual literary publication Folio in 1924.  Poetry: A Magazine of Verse described it that year saying, "Folio consists of loose leaves in a portfolio, each contributor being the owner of one of these leaves, and choosing what in his judgement will best represent him."  Gregory explained, "There is no 'angel,' no editor, no policy, and only the postoffice is censor."
The avant-garde nature of the magazine was exemplified by its carefree publication schedule--or lack of one.  "No monthly or quarterly interval is announced," said Poetry. 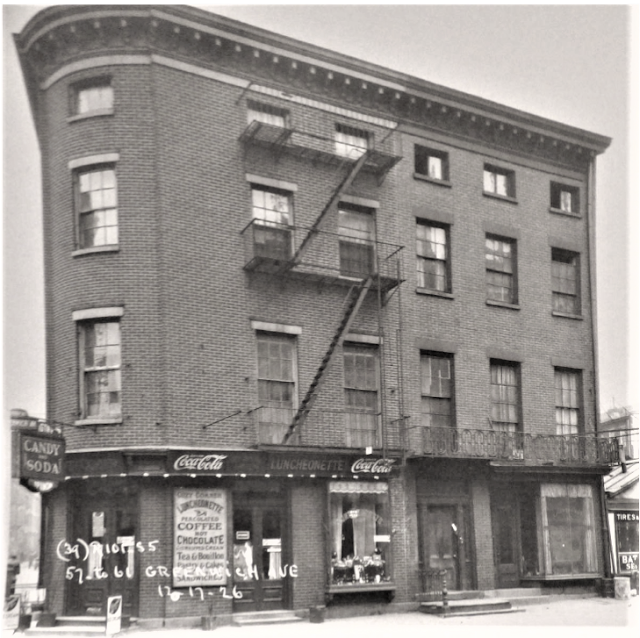 A one-step stoop survived in 1926.  from the collection of the New-York Historical Society.
In 1958 the ground floor became home to The Allen Studio.  Lee Bruce's syndicated column "Political Notes" which appeared in The Brooklyn Daily on August 15 announced:

If the women around our Boro are looking svelter these days, it's probably because they have been availing themselves of the services of Beatrice Allen who has classes in Modern Dance and in Body Alignment.  According to informed sources, Body Alignment instruction has been developed to free you from fatigue, tenseness and other pressures of daily living, in addition to giving you that 'long torso' look.  The Allen Studio, in case you want to know is at 59 Greenwich Avenue, Manhattan.

Beatrice Allen may have been slightly ahead of the fitness craze.  With the year the space became The Steak Joint restaurant.

The Villager, June 25, 1959 (copyright expired)
Steaks and chops gave way to home-made candy when Barretts of Cape Cod moved in late in 1962.  Three generations old, the firm had started in Provincetown, Massachusetts and was famous, according to The Village on December 17, 1962, for "its 70-year-old recipe for fudge."  The article said "The fudge, seven regular flavors and a special of the day, is made right in the shop on Greenwich Ave.  A gas stove sits in the window and its manager 'Bo' Peijovich daily makes the fudge."
Barretts was also known for its old-fashioned "penny candies."  The Village wrote, "Over 150 penny candies are available to children of all ages who walk around with a small basket and pick out their favorite sweets.  They have buttons on paper, squirrel nuts, chewy caramels (a big seller), sugary bacon strips, sour balls, just to mention a few."
June Owen, writing in The New York Times on June 14, 1963, said "It is a tossup whether children or adults get the bigger thrill...For the adults, many of those penny candies are sweet reminders of childhood.  The names themselves may inspire nostalgia--licorice sticks, root beer barrels, mint juleps, banana splits, Mary Janes, buttons on paper, cinnamon imperials." 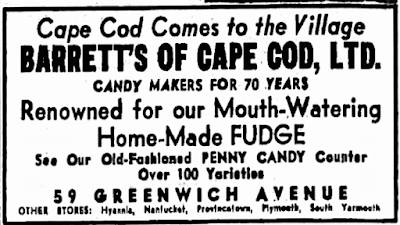 The Villager, December 20, 1962
Nevertheless, said Owen, the fudge was not to be overlooked.  In addition to the regular chocolate, there were also "chocolate nut, vanilla nut, maple, maple nut and peanut butter fudge."  A special treat on the weekends was often marshmallow chocolate fudge.
By 1972 Barretts of Cape Cod gave way to the Bizzare Bath Boutique.  Subsequent tenants in the store were Idle House Bookstore in the 1980's, LaBella Pompeii Pizza in the '90's, and Our Name Is Mud pottery store by 1998.  On December 9 that year, The Village wrote about Our Name Is Mud's "naked pottery you can paint yourself--candlestick holders, picture frames, mugs, vases, housewares." 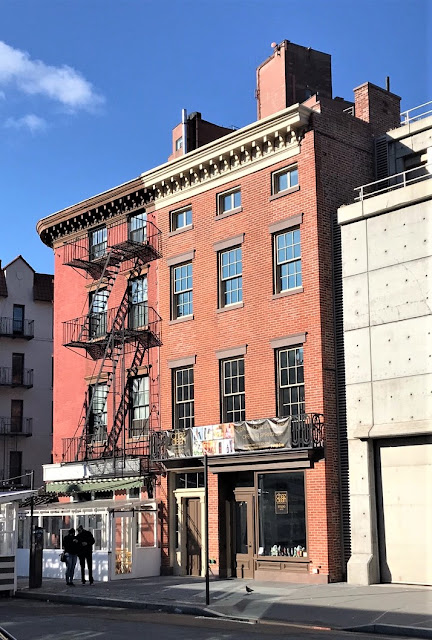 The entire building was vacant in 2018 when Los Angeles hair stylist Chaz Dean sought a special permit to modify the two lower stories of 59 Greenwich Avenue as a "combined hair products retailer and hair salon."  The third and fourth floors would be converted to residential units.  (A special permit was required in order to extend the commercial space above the first floor.)  The request was approved and a renovation-restoration of the 1845 began in 2019.
photographs by the author
LaptrinhX.com has no authorization to reuse the content of this blog
Posted by Tom Miller at 1:11 AM