In 1888 developer Charles Fuller commissioned Edward L. Angell to design a sprawling apartment house on Amsterdam Avenue, at the southeast corner of 75th Street.  The architect had opened his office just two years earlier.  Working almost exclusively on the Upper West Side, by the turn of the century he would be well known for the houses, flats and hotels he designed in trendy styles like Queen Anne.

Completed in 1889, it was a dignified five-story building of beige brick, brownstone and reddish terra cotta.  A marriage of Queen Anne and Romanesque Revival styles, it featured both stone and brick quoins, checkerboard brick spandrel panels, projecting eyebrows over the arched openings, and a complex honey-combed cornice.  Deeply recessed within the Romanesque entrance around the corner at No.  182 West 75th Street (renumbered No. 170 in 1905) were double doors with handsome carved Aesthetic Movement panels. 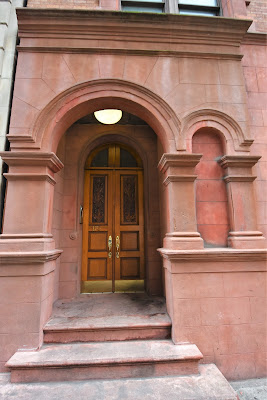 Unlike the East Side, where apartment buildings were identified by their addresses, developers on the West Side had already begun the tradition of naming their flats; like the Dakota completed in 1884.  Fuller dubbed his new structure The Wachusett, a Native American term meaning "mountain place."  Very likely, though, he was honoring the Union steamer warship that had seen repeated action during the Civil War.

The Wachusett attracted well-to-do residents like stockbroker Buckingham St. John Hoyt.  Identified professionally most often as B. St. John Hoyt, his office was in the Manhattan Life Building at No. 66 Broadway in 1895, when his clients included the St. Louis, Kennett and Southern Railroad Company and the Lake Cities Electric Railway Company.

Hoyt still lived in the Wachusett in 1905 when he and two partners recognized the opportunities of the burgeoning automobile industry.  Cars needed tires, and the manufacture of tires required rubber.  The trio pooled $50,000 (about $1.4 million today) to start the International Guayale Rubber Company.

The venture was initially successful.  R. C. Van Arsdale, writing for The Magazine of Wall Street in 1919 noted that the firm was manufacturing rubber from the guayale plant, "which grows wild in northern Mexico."  It "owns 2,000,000 acres of guayale land [and] reports increasing operations and good prospects in this industry."

In the meantime, while their husbands tended to their careers, the women of the Wachusett routinely appeared in society columns.  Mrs. Charles Hatfield, like other moneyed wives, busied herself with charitable causes.  She was a supporter of the Riverside Day Nursery in the first years of the 20th century, and was listed in Club Women of New York in 1908.  The elevated social status of the Hatfields was reflected in Charles's role as usher in the St. Patrick's Cathedral wedding of Mary T. Ryan to Matthew P. Halpin on December 29, 1913.

Wealthy widow Mrs. Frances Carter involved herself in musical and artistic endeavors.  She was a member of the New York Browning Society (becoming its president by 1921).  She was in charge when the group staged Robert Browning's Pippa Passes in January 1918 for the benefit of the Italian Ambulance Fund; and often participated as a performer or reader in various productions.  She was also an active member of the Women's Philharmonic Society.

On January 12, 1910 she attended a lecture of the New York Browning Society in the white-and-gold room of the Waldorf-Astoria Hotel.  Her purse slid off her lap "at the most interesting part of the lecture," according to The New York Times two days later, and rather than cause a disturbance, she let it remain there until later.

She was already downstairs following the lecture when she remembered the purse.  She rushed upstairs where the hotel staff was clearing up the room.  The purse could not be found.  It was not until she returned home that she realized that inside the purse were "four valuable diamond rings."

The Times said "She would set no valuation on the four rings, but described them as handsome, large stones."  She offered a reward "with no questions asked."  Whether she ever got her jewelry back is unclear.

Clark Bell and his wife were in the building at the time.  A distinguished attorney, he was president of the Medico-Legal Society of New York--a group that foreshadowed today's medical forensics units.  In 1886 the Society said of him "he has, more than any other American, rendered important service to the great cause of Medical Jurisprudence" and "By his active zeal, he brought the Medico-Legal Society of New York, into a deserved prominence, with the professions of law and medicine and with the public."


Bell was a prolific technical author, already having published the papers "The Coroner System and Its Needed Reforms," "Suicide and Legislation," "The Rights of the Insane," "Madness and Crime," and "Shall We Hang the Insane Who Commit Homicide?"

The highly-publicized murder trial of William Marsh Rice by Albert T. Patrick in 1906 drew Clark Bell's attention.  Patrick was accused of having poisoned the old man with embalming fluid, which caused death by the consequential build-up of fluid in the lungs.  Defense attorneys argued that embalming fluid could not reach the lungs.

Bell shocked almost everyone when he invited New York Governor Frank W. Higgins to the Medico-Legal Society's annual meeting and dinner at the Hotel St. Andrew on December 18.   He was "exceedingly anxious to have Gov. Higgins meet the members," explained The Times.  Bell intended to demonstrate that, indeed, embalming fluid "will carry poison into the lungs and congest them."

On the night before the dinner he told reporters at his apartment in the Wachusett  that "he could show the Governor or his representative with a corpse which would approximate in age, weight, and other essentials that of Rice, that the argument...that embalming fluid could not reach the lungs and leave signs of poison was unfounded."

The reporters were, understandably, curious as to whether the embalming would take place during the dinner.  "Oh, I believe there would be no trouble," he answered.

Mrs. Bell had other things on her mind.  In August 1908 she fired off a letter to the Public Service Commission complaining about street noise.  The New-York Tribune explained it "drew the attention of the commission to the unseemly din traceable to the Amsterdam avenue line of [street] cars."

Like B. St. John Hoyt, William C. Cox was involved in the automobile industry.  Along with his brother, Charles Henry Cox, he ran the Cox Pneumatic Cushion Company, manufacturers of automobile shock absorbers.  Mrs. Cox, meanwhile, was socially visible with luncheons and bridge parties held in the apartment. 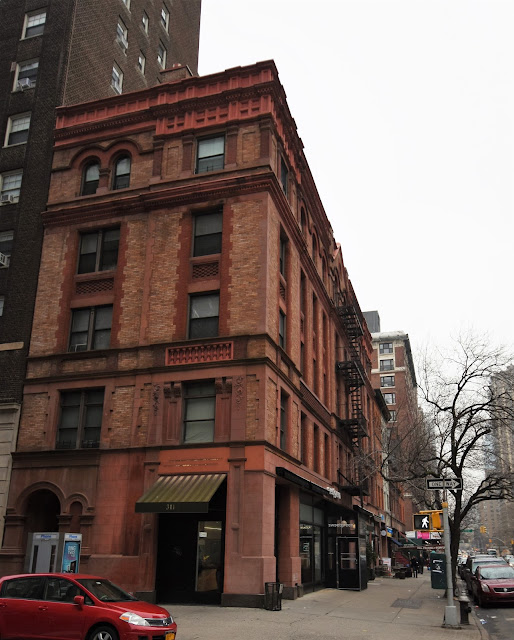 Warren Rosecrans Hedden and his wife, the former Janet Smedley were early residents of the Wachusett.  Born on Christmas Day in 1861, Hedden was a nationally-known organist, having started his musical career as a boy soprano in the choir of Trinity Church.  Janet's father, William Smedley, had been for years the choirmaster of St. James's Church in Chicago and she was an accomplished singer.

In 1896 Hedden took the position of organist of the Church of the Incarnation.  That year both he and Janet would return to Trinity Church for the 50th anniversary of the consecration of the present building.  The elaborate service included a 36-piece orchestra and both organs.  The New York Times reported on May 15, "Prof. Frutchey played the great organ, and Prof. Hedden the smaller organ in the chancel.  In addition to the regular choir of boys, there were Mrs. Warren R. Hedden, who was the soprano soloist, and several volunteer singers."


In addition to his organist duties, Hedden was a warden of the Church of the Incarnation, and chairman of the New York City chapter of the American Guild of Organists.  The couple remained in Wachusett at least through 1922.


Harry Bajur's business prospects were bright when he reorganized the Bajur Motor Lighting Company in 1918 as the Bajur Motor Appliances Company.  The firm manufactured electric automobile starters and received financial backing from the General Electric Company, which became the majority stock holder.

Almost immediately another firm, the Eclipse Machine Company challenged Bajur's patents, and eventually won.  The result was that the two competitors were making virtually the same products.  The Eclipse Machine Company forged ahead, making $1 million a year when, despite the General Electric support, Bajur was forced to shut down its factory in 1922.  Henry Bajur was still living in the Wachusett when a stockholder meeting on March 23, 1923 resolved to liquidate the company.

The building would continue to see professional tenants through the remainder of the century.  Oscar Korff was assistant to the secretary of the American-Russian Chamber of Commerce until 1950 when he joined the advertising staff of El Diario de Nueva York, a Spanish-language newspaper.

And John C. Hazard, who had been a proofreader for The New York Times for 25 years, was living here when he died at the age of 78 in 1960. 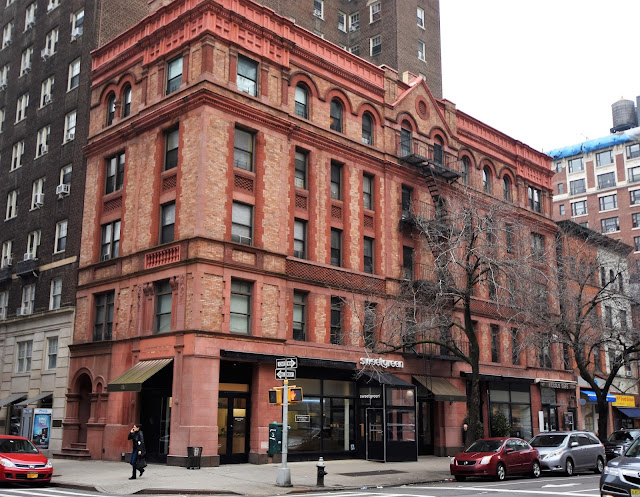 A 2001 conversion to condominiums resulted in just eight apartments, including two duplexes.