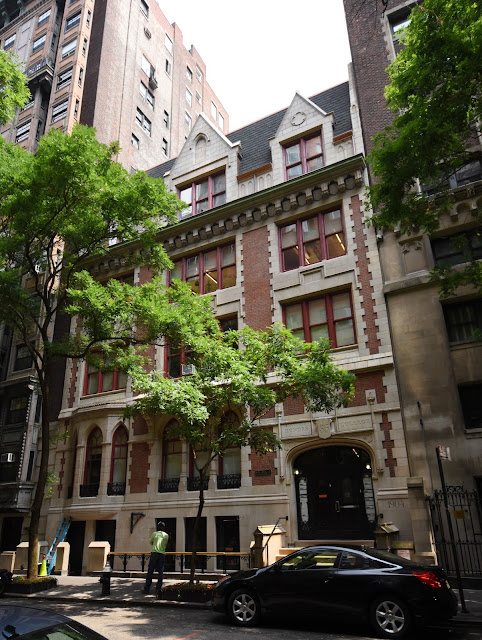 In 1851 a group of well-to-do Swiss immigrants responded to the needs of their compatriots who were not faring as well.  The Swiss Benevolent Society was incorporated that year.  The group not only relied on the support of its members, but in its annual meeting at Delmonico’s the following year, it was noted that the Swiss Federal Government had donated $283 and $381 more came from 16 of the Cantonal Governments.

By 1883 there were between 12,000 and 15,000 Swiss-born residents in New York City.   On April 3 that year the New-York Tribune reported “to meet the increasing demands upon the society, it has been decided to construct a building for its purposes, to be called The Swiss Home.”

The Society purchased a home at No. 108 Second Avenue which was, according to The New York Times on December 28, 1883 “remodeled and refitted to suit the purposes of the Society.”  The total cost for the house and its remodeling was $28,089.63; about $685,000 in 2015 dollars.  In addition, over the past year the Society had spent $12,029.22 in “relieving the wants of needy Swiss and for medical attendance.”  Clearly the worthy project was not an inexpensive one.

The Swiss Home for Indigent Men and Women was opened “for the inspection of its ‘benefactors’” on the afternoon of December 27, 1883.  The interior of was decorated with flags and flowers for the event; and guests toured “the different departments, the dormitories, the bath-rooms for men and women, the sitting-rooms, and parlors.”

To help finance the Swiss Home, occasional fairs were staged, like the one that opened on November 15, 1886 at Irving Hall.  The New-York Tribune reported “Among the special attractions will be a shooting gallery in charge of the Helvetia Rifle Club with prizes for the best marksmen, Swiss pottery and specialties, thoroughbred Swiss St. Bernard dogs, music by Conterne, and singing.”  The newspaper noted “many of the young ladies will wear the pretty costumes of the different cantons of Switzerland.”

By 1903 the Society looked for a site for a new building.  The search may have been partly prompted by health concerns.  That year alone, more than 10,000 people died in New York City from tuberculosis—a disease commonly linked to crowded conditions and the lack of fresh air and sunlight.  In reporting on the purchase of Nos. 35 and 37 West 67th Street in 1904 the Annual Report noted “the site is an exceptionally good one and the proximity to central Park, with its green lawns, its rocks and lakes, will remind the future inmates of their mother country.”  But a year later the Report added that the site was “located in the most salubrious,” or health-giving, part of New York City.

The Society announced its intentions to build a five-story home (the Real Estate Record & Builders’ Guide termed it an “asylum”) in February, 1904.  Within four months an architect had been chosen, Swiss-born John E. Scharsmith, and the projected cost of the new building was set at $55,000.

No longer a household word; Scharsmith’s name was well known at the time.  He not only designed structures, but actively traded in real estate.  On the Upper West Side alone he had been responsible for The Chatworth Apartments and the The Hohenzollern within the past two years, and soon would start work on the eight-story 425 West End Avenue apartment building.

The Swiss Home was completed in December 1905.  Although it was popularly reported that Scharsmith based his design on the Town Hall in Basel, the two structures have basically nothing in common.  The architect produced an attractive Collegiate Gothic building of red brick and limestone that appeared more school than residence.  Neo-Gothic elements like the pointed-arched first floor openings and doorway, the drip moldings within the fourth floor gables and the finishing touch—the decorative finial on the center gable—added to the romantic charm.  Almost hidden from view and nestled within the cornice brackets, were the heraldic shields of the 22 cantons of Switzerland.

The Swiss Home was dedicated on December 16, 1905.  Among the dignitaries present were the Swiss Consul, J. Bertschmann and the Swiss Minister, Dr. Leo Vogel, who had traveled from Washington DC for the occasion.

Guests toured the facility, finding in the basement a “waiting room, smoking room, repair shop, dining room for transients, kitchen, laundry, storeroom, fumigator, bath and toilet rooms,” according to The Times.  The first floor held semi-public rooms like the inmates’ dining room, a meeting room and small waiting room.  The women’s accommodations were on the second floor—10 bedrooms, a bathroom and sitting room.  Men were housed on the third floor where there were 11 bedrooms.  The top floor had another eight bedrooms “for transients” and a cedar closet.

There was room for 80 residents—30 permanent and 50 transient.  The Home assured “in case of great pressure accommodations to the extent of twenty additional beds could be procured.”

An example of such “great pressure” came about seven years later when, in April 1912, the RMS Carpathia steamed into New York Harbor carrying the survivors of the RMS Titanic.   Even before the ship arrived, Mrs. Nelson H. Henry was concerned about the impoverished passengers who would have no means to find shelter.

She formed a committee to ensure “that the steerage and second class passengers who need help when they reach New York by the Carpathia shall not be left in want,” reported The Sun on April 18.  Mrs. Henry told reporters “We will see to making definite arrangement for their care and we will try to give them the kind of welcome that they have reason to expect from hospitable America.”

The committee visited benevolent societies across the city.  The Sun reported that “The Swiss Benevolent Home, which has strict rules about taking only immigrants from Switzerland, agreed to take fourteen women and children, no matter what their nationality.”

The problem that the Swiss Benevolent Society soon realized was that the Swiss House was never more than half-filled.  The result was that the care of each person ran about $400 a year.   It was a concern that President Robert J. Schwarzenbach found untenable.  In addition, the Upper West Side location, once so salubrious, was now developed with theaters, apartment houses and saloons.  In 1923 a Mount Kisco, New York estate was purchased and the Swiss House residents transferred there.

The 67th Street building was converted to the Swiss Home for Self-Supporting Women.  Such female-only hotels were highly popular.  They presented unmarried working women with a safe haven at modest costs.  Strict rules and oversight by female management kept the residents safe from Manhattan’s “wolves.”  Residents paid between $9 and $14 for rent and meals; and while many of the other working women’s hotels had age limits, the Swiss Home did not.

One of the residents in 1925 was Rose Jager, who fell victim to a con artist that year.  Rose was out of a job and she placed a newspaper advertisement for a governess position.  She was picked up at the Home in a high-end automobile and taken to a hotel where she was interviewed by 42-year old George Hamilton.  The potential employer, according to The New York Times on July 23, 1925, had an “impressive appearance, a suave manner and smooth talk.”

Rose was a bit too trusting and needed a job.  What she could not know was that police had been searching for Hamilton for weeks.  By the time he was arrested he had swindled at least 50 out-of-work women out of the little money they still had.

Detectives revealed his methods:  He would answer advertisements of women seeking governess jobs; and then “Hamilton would pose as a wealthy man intending to employ his victim.”  By his smooth talk he would find out how much money the applicant had.

The police explained he would “tell his prospective victim that he intended to deposit a sum of money to her account for expenses of the position, but that, to cover himself, since he had once been swindled by a governess, she would have to give him control of her savings account.”

Rose naively complied and Hamilton drained her account of $650.  The crook had defrauded jobless women of as little as $10 to large amounts like Rose’s.  His scheme was undone when he went to the Jeanne d’Arc Home on West 24th Street and was recognized by a girl whom he had earlier tried to swindle.

Another resident, stenographer Else A. Sittle, was 25-years old in 1935.  That same year she left the Swiss Home on November 24 for a visit to France and Germany.  Else’s parents lived in Germany and she intended to spend the holidays with them.

She had another reason for the trip, as well.  Born in Saarland, Germany, she was intent on making her voice heard regarding political changes in her homeland by voting in the plebiscite.  Else did not confine her opinion to the voting booth and her outspoken views on Adolph Hitler were, indeed, heard.

Else A. Sittel was arrested by the Nazis and confined to the prison in Waldmohr “on a charge of making derogatory remarks about Chancellor Hitler and his government.”   After serving her sentence she was released on January 3, 1935 and finally visited her parents before returning to the States on the SS President Roosevelt.  Upon disembarking on January 20 she told reporters “She said she did not think she would visit the Reich again for some time.”

In 1994 the Swiss Benevolent Society put the Swiss Home on the market for $2.95 million.  It was purchased by New York University for its Makor Center for Jewish Life.  The endeavor was short-lived and in 2001 the University donated the building to the 92nd Street Y.  Six years later title was transferred again, this time to CUNY.  After a significant interior renovation the building became the Macaulty Honors College, complete with modern classrooms, a lecture hall, and performance space used by CUNY students city-wide.

The renovations sympathetically preserved the exterior of Scarsmith’s dignified edifice.  It is unchanged (other than the sad loss of the wonderful decorative gable finial) after more than a century.