When Dr. William Seward Webb married Florence Adele Vanderbilt, the daughter of William H. Vanderbilt, in a lavish ceremony in St. Bartholomew’s Church on November 21st, 1877, things would change for the doctor.  The groom was persuaded to give up his medical practice and to take up finance.  He established the Wall Street firm of W. S. Webb & Co. in 1883.  That same year William Vanderbilt asked him to take control of the Wagner Palace Car Company, a manufacturer of railroad cars of which Vanderbilt owned the controlling interest.

The following year Webb’s brother, Henry Walter Webb, married Leila Howard Griswold.  He quickly found that being a brother-in-law of the Vanderbilt family could be advantageous.   In 1886 his brother offered him the position of Vice President of the Wagner Palace Car Company.  By the time of H. Walter Webb’s untimely death in 1900, he was vice president of the New York Central Railroad under Cornelius Vanderbilt.

Leila Webb was 44 years old when died her husband died.  She was suddenly the single mother of two young sons: 10-year old John Griswold Webb (who would go on to become a state senator), and 15-year old Henry Walter Webb, Jr.   The burden was lessened by her personal wealth (she was the daughter of millionaire John Augustus Griswold who, among his varied career had personally paid for the construction of the USS Monitor during the Civil War) and the $3 million she inherited from her husband.

While Leila Howard Webb mourned, the Roman Catholic Orphan Asylum. which encompassed the entire block between 50th and 51st Streets, from Fifth Avenue to Madison, was being demolished.  The immense plot of land sat squarely amid Manhattan’s most exclusive residential neighborhood, and across the avenue from “Vanderbilt Row”—so called because of the string of magnificent mansions built by Leila’s in-laws.

The Vanderbilts—spearheaded by George--scurried to prevent commercial interests from buying any of the Asylum properties and constructing hotels or similar structures that would threaten their neighborhood.   Soon the block was filling with handsome residences.

On the Fifth Avenue frontage Morton Plant purchased the corner plot at 52nd Street from George Vanderbilt where he erected his massive mansion; and on the southern corner the exclusive Union Club was built.  Between them George Vanderbilt erected two matching marble rowhouses.   On 51st street, stretching to Madison Avenue, construction of lavish homes would continue for the next few years.  Among these was the new mansion of Leila Howard Webb.

Although Codman was born in Boston to a prestigious family, he grew up in Paris. Upon his return to the States, he decorated the mansions of New York’s old guard, refusing commissions from the nouveau riche, and wrote the widely-read Decoration of Houses in partnership with Edith Wharton.  Codman’s Parisian background left deep impressions on him and when he began designing houses as well as decorating them, his love for all things French was obvious.

For Leila he produced a magnificent brick and stone structure that would have been at home on the Champs Elysee.  Codman used the American basement plan, highly popular at the time, which he had vigorously championed.  It did away with the high stoops of a generation earlier.  Instead the entrance within the limestone base was just three steps above the sidewalk.  Above were three stories of brick where tall, multi-paned French windows were accented by painted shutters.  A steep two-story mansard capped the residence and provided additional French flair.

The charm of the exterior belied the elegance inside.  The heavy bronze entrance doors opened into a vaulted foyer where another set of ornate bronze-grilled doors added protection.  Leila’s home had the modern convenience of an elevator and the expected traditional features like a bronze-railed staircase, marble floors, richly paneled rooms and exquisite plasterwork.   In addition to Leila’s and the boys’ bedrooms and dressing rooms, were guest rooms, dining room, ballroom, library, morning room, reception room, and the other areas necessary in the home of a wealthy socialite. 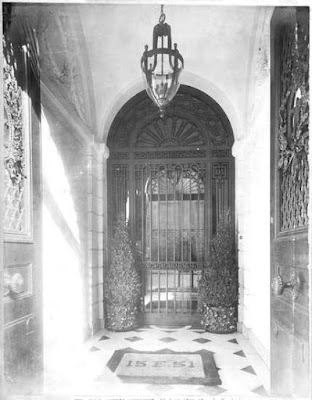 Leila apparently worked very closely with her architect, for on October 8, 1904 she and Codman were married.

While Leila went about her entertaining and charity work; Codman was busy designing mansions—two of them on the 51st Street block.  In 1905 he designed the $300,000 mansion of E. Rollins Morse; and the following year he started work on No. 17 East 51st Street for F. K. Sturgis. 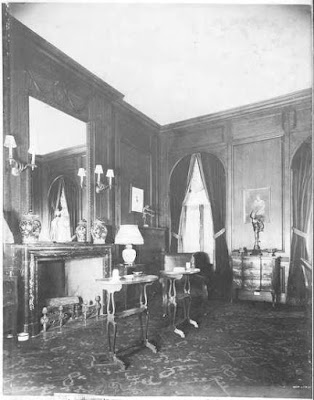 Leila was active in the Stony Wold Sanitarium for women and girls afflicted with tuberculosis.  Her interest may have been prompted by her former husband's fight with the disease when he suffered his fatal heart attack.  The mansion was the scene of sanitarium meetings such as the one in January 1907 when officers were elected.

That same year Codman and Leila purchased a building plot at No. 7 East 96th Street where mansion building was going on at a feverish rate.  The trend had been sparked by Andrew Carnegie’s sumptuous 1903 residence at Fifth Avenue and 91st Street, built 20 blocks north of other millionaires’ homes at the time.

The purchase of the plot was possibly in reaction to the resolute advance of commerce into their Midtown neighborhood.  But if they considered moving northward, it would not happen—at least not in Leila’s lifetime.

The Codmans suffered excruciating public humiliation in 1909 when they returned from Europe in November on the Lusitania.  They told Customs officials they had nothing to declare; however when the inspector opened their trunks, he found about $1,000 work of new gowns “evidently of foreign make.”

Deputy Surveyor Alexander McKeon sent the trunks to the Appraiser’s Stores.   Leila and Ogden were interrogated.  They insisted that the gowns had, indeed, been purchased abroad, but that they had been shipped to the States by the maker in 1908.

The unwavering McKeon was not intimidated by the high social station of his suspects.  He spent nearly a week investigating the case and searched for 1908 customs records that would substantiate their story.  There were no documents showing any goods arriving at Customs in 1908 for the Codmans.

Instead he found the records of Leila and Ogden returning to New York that year and “swearing off” the expensive gowns and women’s clothing “as having been taken out of the country by them and therefore exempt from duty.”

On November 20, 1909 The New York Times very publically reported “The matter was referred to Harrison Osborne, Solicitor to the Collector, and he sent a request for the Codmans to come to the Custom House.  Mr. and Mrs. Codman were asked to explain why their goods should not be declared forfeited to the Government.”

Odgen Codman, Jr. remained in the house; while he almost immediately began laying plans for a new home on the 96th Street plot.   That house, fully completed in 1913, bore remarkable similarities to the 51st Street home—slightly scaled down.  As his new home neared completion in April 1912, Codman sold No.  15 East 51st Street to Bertram G. Work. 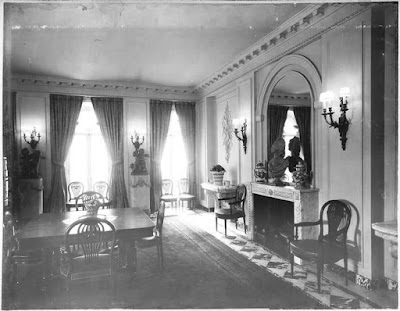 In the recent decades titans of industry like John D. Rockefeller and Henry Flagler had relocated from Ohio to New York City.  Now Bertram G. Work and his family joined the trend.  Work was the president of the Akron-based B. F. Goodrich Rubber Company.  With the explosion of the automobile industry, rubber tires were in immense demand.   And the Work fortune increased proportionately.

Marion Sawyer Work updated the décor of No. 15 East 51st Street and entered the life of a Manhattan socialite.   The Works, including their son Bertram, Jr., spent much time traveling.  They would routinely summer at White Sulphur Springs before purchasing their lavish summer estate in Oyster Bay, Long Island.

It was there, on the evening of August 27, 1923, that Marion died at the age of 49.  Despite the much-changed Manhattan neighborhood, Bertram remained in the 51st Street house; although he spent much time in Oyster Bay, tending to his prize-winning gardens.  On August 30, 1927 he died of a heart attack while traveling in Switzerland.

Bertram Jr. sold the 51st Street mansion in April 1928 for $325,000; choosing to move into a modern duplex apartment at No. 941 Park Avenue.  Purchased by a “Philadelphia investor,” it was leased to Dr. A. S. W. Rosenbach, who lived in the upper stories and slightly renovated the lower floors as the Rosenbach Galleries. 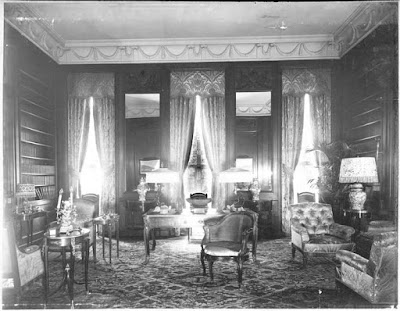 Recognized world-wide, Rosenbach’s gallery offered extremely rare documents, artwork and antique furniture.  In 1930 he offered 69 letters written by George Washington that documented events of the Revolution, including the sentencing of Major John Andre, and 36 letters to Cornwallis.  Within the next three years clients could purchase letters from Thomas Jefferson and other signors of the Declaration of Independence; speeches of Abraham Lincoln; original works by Shakespeare; and works by Dutch masters.  In 1940 Dr. Rosenbach displayed manuscripts by Chaucer.

But after nearly two decades in the house, Rosenbach was forced to leave.  In 1947 the Roman Catholic Church bought up the houses from No. 15 to Madison Avenue and around the corner.  The Diocese quickly presented Rosenbach with an eviction notice.

In October an auction was held of the stock that included “furniture antiques, paintings, color prints, silver, and textiles.”  John Fleming, the gallery’s manager, told reporters that Dr. Rosenberg had tried to buy the house back, but “St. Patrick’s officials” refused to sell.  They asserted they had “plans” for the structure.

Indeed they did.  The following year construction began on the Look Building, designed by Emery Roth & Sons.  The loss of the magnificent turn-of-the-century mansions designed by Codman is tempered by their replacement with an equally masterful mid-20th century structure.