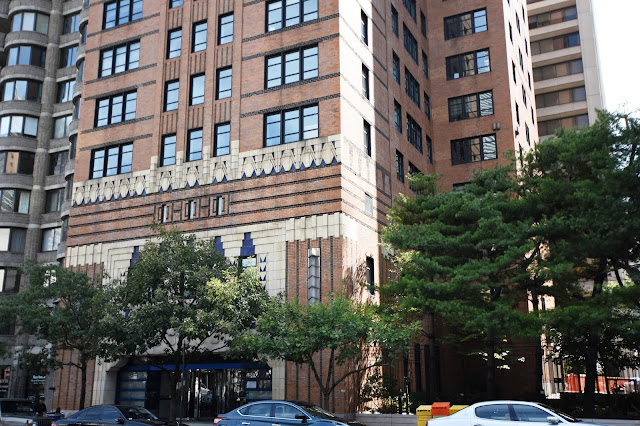 In the first decades of the 20th century the corner of 61st Street and Columbus Avenue was just two blocks south of the notorious slum known as San Juan Hill.   But unlike that dangerous and crime-ridden neighborhood; the area around the apartment building at No. 43 West 61st Street was quite respectable.  The New York Times described one floor-through apartment here in 1910 as “a handsome one, luxuriously furnished.”

At the time, tremendous change was taking place throughout the country.  Automobiles were overtaking horse-drawn vehicles as the preferred mode of transportation.  By the 1920s garages were sprouting throughout New York, capable of housing large numbers of cars.  Among the most ambitious of these were the Kent Automatic Garages.

Milton A. Kent was president of the firm which went far beyond the normal ramped garages.  In March 1928 he and his brother started construction on a $1.4 million structure at No. 211 East 43rd Street capable of housing 1,000 vehicles.  It would be the first of the Kent chain of garages in the city.  Kent’s automatic “car hotels” went further than normal garages.  The New York Times said on March 25, 1928 “car owners will experience for the first time the luxury of fast and safe ground-floor receipt and delivery of their cars.”

Once the chauffeur or owner dropped off his car at street level, the Kent brothers’ patented machinery took over.  The entire facility was manned by as few as six employees, while a system of self-leveling elevators--moving at one floor per second--and electric automatic "parkers" handled the cars.  The parkers were small rubber-tired mechanisms that coupled with the rear axle.  Within only 15 seconds the parker could move the vehicle 60 feet from the elevator to either park or retrieve it.

Only eight months later Michael Kent announced plans for his second garage.  The site where the apartment house at 61st Street and Columbus Avenue stood was purchased and on October 31, 1928 Kent declared his intentions to build a 25-story duplicate of the 43rd Street garage.   Directly next door were the Packard auto showrooms.

The architectural firm of Jardine, Hill & Murdock, who had designed the 43rd Street garage, filed plans.  Consistent with the up-to-the-minute technology inside, the façade was a jazzy show of the wildly popular Art Deco style.   Orange brick was highlighted by black brick bands and Art Deco designs. 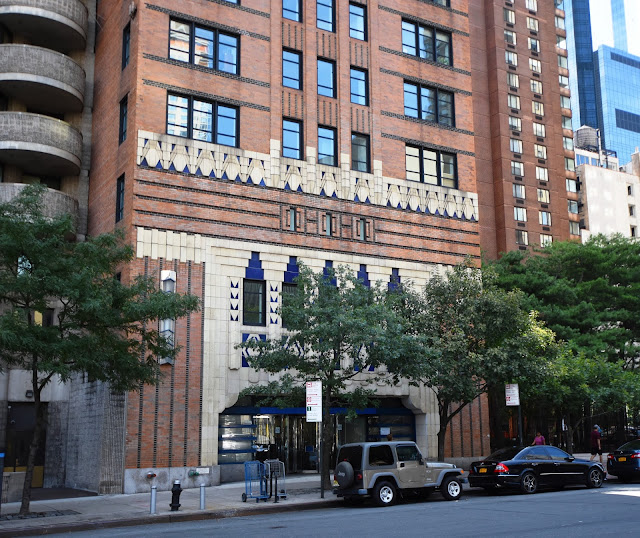 But at street level the architects let loose with vibrant terra cotta ornamentation.  Aztec-inspired, cream and royal blue tiles appeared as chevrons and medallions around the vast car bays and as punctuation of setbacks and parapets of the upper floors.  The New York Times summed it up succinctly:  “The building is of modernistic design.”

Patrons paid $.50 per hour for the first two hours, and $.05 each hour after.  If they desired, they could make use of the “luxurious lounging and rest rooms” of the second floor.  But in the hard times of the Great Depression, average citizens found other purposes for their money.  In September 1931 the Kent Automatic Garage firm failed.   The building continued to be used as a garage, without the Kent Brothers.

It struggled along until 1943 when the Sophia Brothers Warehouse purchased the building from the Central Savings Bank.   Renovations for the warehousing business were executed by architect George S. Kingsley and required, among other things, the removal of Kent’s complex machinery.   Although the firm would remain in the building for years, it appears that there were, at least initially, some financial problems.  In March 1946 Supreme Court Justice Aron Steuer granted Sophia Brothers a 49% tax relief retroactively for the years 1942 through 1945.

By mid-century the building was used as much as offices as warehouse.  In February 1954 Sophia Brothers Warehouse signed a significant lease when rented a full floor to De Luxe Pictures.  The new tenant used the space for the “storage and distribution of motion picture films.”

The eclectic use of the building continued when the offices of the Foster Parents' Plan opened here.  On April 24, 1956 Elizabeth M. Whitmore, director of the Foster Parents’ Plan in Munich, spoke to reporters about the work with German civilian war victims from the Sophia Brothers building.

She said that “German camps for displaced persons have not been closed, but merely renamed Refugee Camps,” and that the agency “was caring for 1,300 distressed children…most of them living in settlements or barracks.”  American citizens were urged to foster a child living in these quarters.

A few months later the Foster Parents’ Plan announced a drive “for funds to buy 100,000 wool scarves and mittens for destitute children in Europe.”  Its focus was quickly diverted when the Hungarian Government collapsed and the Soviet army invaded.   Refugees began arriving in New York City.  On November 25, 1956 The New York Times reported that the “sixth and seventh planes to bring Hungarian refugees from Soviet tyranny landed in the United States last night.”  The State Department directed New Yorkers to the Foster Parents’ Plan office here to leave donations.

Throughout the next three decades the building continued to be used by media companies—like Sterling Movies USA which distributed television movies, and Folkways Records and Service Corporation—and by other firms including the Public Service Mutual offices and Manhattan Cable Studios which initiated a two-way cable TV system here in 1971.

Major change came when the Sophia family eventually sold the building.  A $40 million joint venture by Aaron Green Companies and British Land of America converted it to a mixed-use condominium.  Completed in 1984, it included 17 residential floors of 94 apartments and 65,000 square feet of office space.  The architects, Alan Lapidus Assocs., Rothzeid Kaiserman Thompson & Bee, and Abraham Rothenberg, paid special attention to the Art Deco façade, carefully restoring the brick and terra cotta.  Before the project was completed the College Board had already purchased the nine floors of offices. 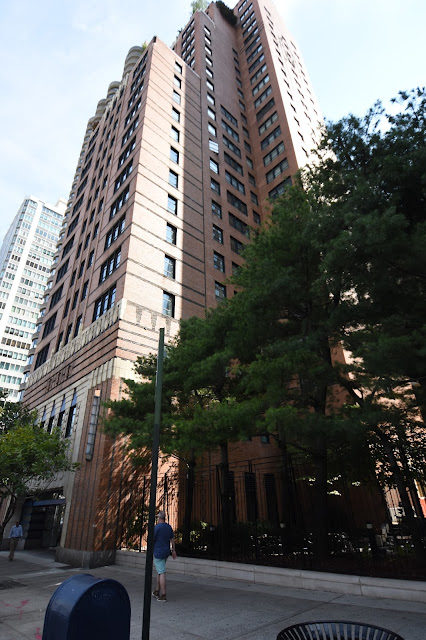 The College Review Board remained in the building until 2015, when Fordham University took over its nine floors as offices for faculty and administrators from 18 departments.  The handsome automobile hotel is a striking reminder of the Kent Brothers’ fantastic vision of housing motorcars.