Like several other New York City architects in the late 19th century, Hugh Lamb and Charles Alonzo Rich realized increased profits by sometimes acting as both designers and developers.  In 1890 they had been in partnership as Lamb & Rich for about a decade and were well-known and respected.  That year they laid plans for an ambitious speculative project on the Upper West Side.

At the time, lavish residences were being constructed that rivaled almost anything on the opposite side of Central Park.   Lamb & Rich procured 14 buildings lots encompassing the entire western block front of West End Avenue, between 76th and 77th Street, and wrapping both corners to include three homes on each street.

The eight houses facing West End Avenue were designed in a symmetrical A-B-C-D-D-C-B-A pattern.  As did most Upper West Side architects at the time, Lamb & Rich drew on historical styles while taking the liberty to mix or alter details as they saw fit.   Although the homes flanking Nos. 347 and 349 at the center of the row were showier with their spiky Francois I dormers and details; the more reserved Renaissance-inspired center residences stood out with their white limestone, mirror-image facades.

The perfect balance of the two residences featured a shared limestone stoop, divided by a stone railing which stopped short of reaching the sidewalk—thus preserving the grand width of the lower steps.  Two-story rounded bays flanked the arched entrances, above which a charming stone balcony coupled the arched openings.  The architects added delightful touches like the carved, scalloped aprons that joined the steep gables, the delicate carved eyebrows of the fourth floor windows, and the tongue-in-cheek copper pots with ring handles atop the downspouts.

The homes were completed in 1891, but it seems that Lamb & Rich may have slightly over-extended themselves of the project.  On October 17, 1891 an advertisement for “A Creditors’ Sale” appeared in The Sun.  “Because of special circumstances, to be explained, we can offer for much less than its value first-class dwelling, with extension, overlooking Riverside Drive and the Palisades, 347 West End av…price about $26,500.”  That discount price would translate to about $710,000 today.

There were no takers.  By September 25 1892 they had lowered the price on No. 347.  Another ad in The Sun announced, “If you wish to get a $30,000 house for $26,000 on easy payments…look at 347 West End Av.”  It was finally, no doubt to the great relief of Hugh Lamb and Alonzo Rich, sold to George L. Vietor, a real estate operator who was busy that year buying up entire rows of houses in the area.

The matching house next door at No. 349 was also purchased for investment reasons.  Mary E. Walker bought it, then immediately leased it to F. H. Ryder for 8 years at $1,200 a year rent in October 1891.  When the lease was up, George L. Vietor was back to buy this house as well.

Vietor leased No 349 to Charles Frederick Rand and his wife, the former Mary Burnham.   Along with the couple’s four children, Mary’s parents, Ammi and Eliza C. Burnham moved in.  Rand’s fortune came from a wide variety of enterprises. Among his many activities, he was head of an iron manufacturing firm, the financial officer of a railway company in Milwaukee, and owned iron mines in Cuba and elsewhere. 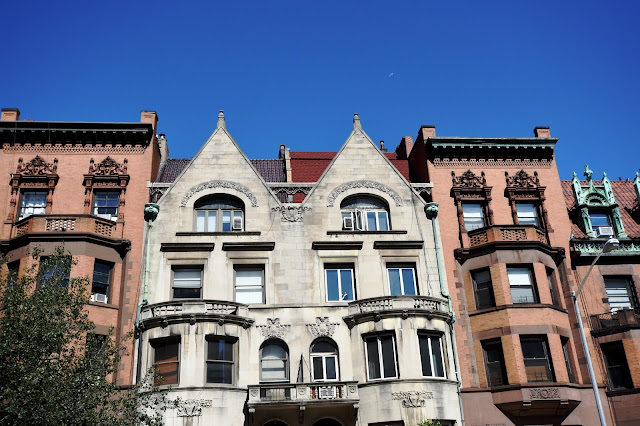 Vietor sold both houses in 1901—No. 349 in May, and No. 347 in September.  Charles F. Rand bought the house where he had been living with his family; while No. 349 was purchased by Louise M. Powell for $43,500.    Louise's husband, cigar manufacturer Joseph Powell, had died in 1895; leaving her to raise her young daughters alone.

On May 18, 1903 the 81-year old Ammi Burnham died at No. 347 West End Avenue.  A self-made man, he had started out life as a farmer in Vermont.  But he had moved on to the lumber business in Michigan, then into railroads and banking.  At his death he owned the controlling interest in the Bank of Brodhead in Wisconsin.

On June 11, 1904 Louise Powell married physician Walter C. Cramp, who was about 16 years younger than she.   Although he had not practiced for long prior to their marriage, Cramp quickly rose in importance and esteem.   He became a Professor of Surgery at New York Medical College while maintaining his private practice.  The Cramps were familiar faces in Newport and like their next door neighbors were highly visible in Upper West Side society.

Both families entertained in the fashion expected of the wealthy.  When the Cramps gave a dinner party in May 1907 followed by “a game of cards,” The New York Times social columnist gushed about Louise Mason Cramp’s decorations.  “The table was daintily fragrant with Spring flowers, streamers of ribbon in the pastel shades being combined with the ferns and floral decorations with graceful effect.”

Popular actress Maud Harrison was about 51 years old at the time of the Cramp’s dinner party and was living in the Hotel Willard on West 76th Street.  She had lived there about six months as she planned a comeback to the stage after a five-year hiatus to care for her ailing mother.  A Christian Scientist, she did not seek medical treatment when she became ill in April that year.   A few days later, at around 10:00 on the night of April 28, a maid found her on the floor unconscious.  She was wearing her nightgown and because she had collapsed near the telephone, it was thought that she had attempted to contact the hotel office.

It was Walter Cramp who was summoned to the actress’s apartments.  Despite his efforts, Maud Harrison died at around 3:00 in the morning without having regained consciousness.  Cramp’s opinion in the death was somewhat imprecise.  “The immediate cause of death, according to the physician, was paralysis,” reported The New York Times.

In 1909 the Cramps hired architect Carl Sotscheck, Jr. to remodel No. 349.  His $7,804 renovations included an additional story to the rear, a new staircase and the altering of walls.

While the Cramps were updating their home, the Rand girls next door were growing up.  In 1910 Marjorie became engaged to Stuart Corlies Adams.  Her sister was already married to the future groom's brother, Newton Adams.

Following Marjorie’s wedding in the Episcopal Church of the Incarnation on Madison Avenue, a reception was held in the West End Avenue house.  The wealth of Charles F. Rand was evidenced by the couple’s wedding present.  The Sun reported “Mr. and Mrs. Stuart Corlies Adams will live in West Orange in a house presented by the bride’s parents.”

When the Rands announced Florence’s engagement Felix D. Doubleday in May, 1914 The New York Times deemed it “interesting.”  The newspaper noted “Miss Rand has been very popular in society since her debut two seasons ago and has taken active part in the society theatricals for charity.”

The following year it was finally daughter Helen’s turn in the spotlight as her mother hosted her debutante entertainments.  Among them was a luncheon at Sherry’s for Helen, whom The Times referred to as “a bud of the season.”

With a much reduced population in the Rand house, Charles leased No. 347 in December 1917 to Harry C. Beidelman.   The end of the line for the spacious home was quickly coming to an end. Louise, now divorced, died in the house in 1942 after a week’s illness.  Her funeral was held in the home on Wednesday, November 24, 1942.

In the meantime the former Rand home had seen a variety of tenants.  In the first years of the 1920s Michigan State alumnus baritone Chase Sikes was living here while he studied music.  Perhaps to further his musical career, Sikes changed his name to Cesare Baromeo, by 1923.  J. D. Bowman lived here in 1922 after having graduated from the Massachusetts Institute of Technology the year before.  He was working for the United Electric Light and Power Co. in New York.  And for at least a decade starting in the late 1930s Dr. Julius J. Fingerhut, a dentist, listed No. 347 as his address.

Both homes were eventually converted to spacious apartments—No. 349 in 1949 and No. 347 in 1959.  The former Cramp residence has just five apartments, including a duplex on the parlor and second floors; and the Rand house has two in the basement, one on the first floor, and two each on the upper floors. 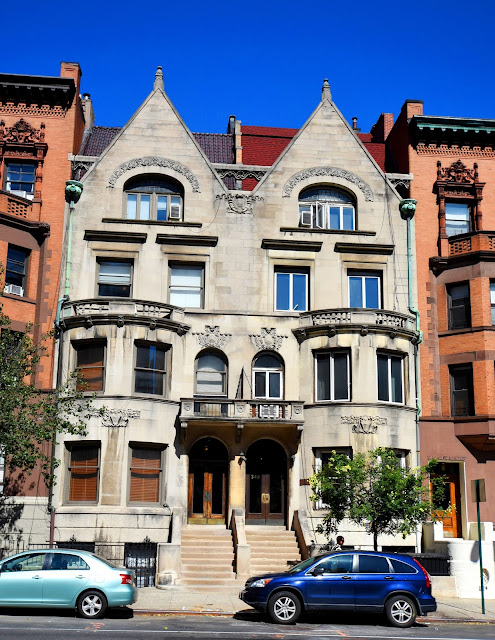 The windows have been unsympathetically replaced, including the wonderful original curved panes of the rounded bays.  But the two limestone residents still haughtily vie for attention among their more show-offish neighbors.