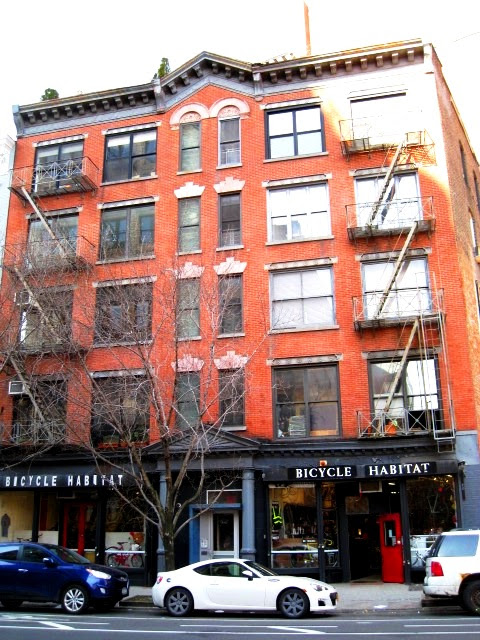 In the last quarter of the 19th century the rows of Federal style houses along Lafayette Street were quickly disappearing.  In their place modern commercial structures were changing the face of the once-elegant residential street.

In 1881 developer Thomas Wetherbed commissioned architect John Sexton to design a loft building at No. 244 Lafayette Street.  The prolific Sexton had been dividing his time in designing rows of townhouses on the developing Upper East Side and tenement buildings on the Lower East Side.  For Wetherbed he produced a five-story brick factory, completed in 1882, which drew no special attention.

But more than a decade later, in 1897, Wetherbed called Sexton back to double the size of his building.  The extension, at No. 242, perfectly matched the northern side.  But Sexton patched the two sides together with a two-bay section in the Queen Anne style.  Here the cornice formed a peak above the eye-catching center windows of the fifth floor.  Sexton gave them the appearance of arched openings by crowning them with ornate terra cotta tympani framed with vaulting brick eyebrows.  The Queen Anne motif was carried through to the entrance portico where hefty columns supported an entablature and sunburst-filled pediment. 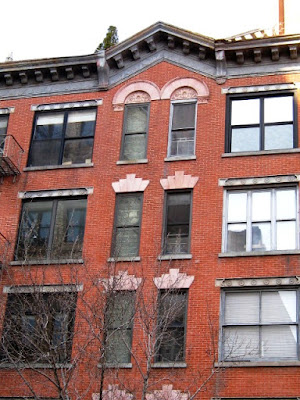 Despite the architectural marriage, the two sections were treated as separate addresses.  Matching retail store fronts flanked the centered entrance.

The building was filled with a wide variety of tenants, from apparel manufacturers to lamp makers.  Nearby was the area which was by now referred to by New Yorkers as the “Italian quarter.”  On the morning of June 18, 1906 about a dozen of the immigrant neighborhood boys brought excitement and misfortune to the Lafayette Street building.

The boys had been playing a few blocks south on Centre Street when they came across a pile of blasting caps that had been left by construction workers.  The Sun reported “There was a good sized armload of the stuff.”

Not realizing the danger the explosives posed, the boys decided they could burn off the rubber insulation and retrieve the copper wires for resale.   On the sidewalk in front of No. 242-244 Lafayette Street they built a fire and, once it got going, dumped the quantity of blasting caps into the flames.  Quickly “there was an explosion that startled the neighborhood and thousands of people ran to the corner from the markets along Mulberry and Spring streets.”
When Policeman Moffatt arrived on the scene, he found five of the boys lying on the street suffering from cuts and burns.  The exploding caps had created copper shrapnel that flew into the faces and bodies of the youths.

The injured boys bore the names of Italian families who came to America for a better life: George Sulivati, Niccolo Garadi, Tommaso Gelesti, Alfonso Grecci, and Alfonso Capola.  Dr. Charles F. Nammack was able to patch up four of the boys.  But 10-year old Alfonso Capola was seriously injured.  The Sun reported that the boy “may die.  His right eye was nearly torn out and a piece of copper was buried deeply in it.  He was cut about the face and head also and burned.”

News quickly spread and frantic mothers, unsure of who the victims were, were hysterical.  “The accident occurred at 4 o’clock when the streets of the Italian quarter are most crowded,” said the newspaper, “and there were 5,000 people in front of the Mulberry street station.  Two of three Italian wives who thought their children were hurt tried to fight their way in and there was a small sized riot for a few minutes.”

The neckwear manufacturing firm owned by Meyer Berse was operating from No. 242 Lafayette Street at the time of the explosion.  A month later Berse would find himself in the midst of a frantic effort to clear his name of ungentlemanly behavior and a resulting strike as well as .

The neckwear union ordered a strike of all the manufacturers on the East Side following an incident in which Berse was accused of manhandling a female employee.  On July 12, 1906 The Sun explained “According to the union, Fanny Tepper’s employer, Meyer Berse of 242 Lafayette street, had an argument with her, in which she admits she answered back very sharply.  Finally, she says, her employer slapped her face and tore her blouse, and then refused to pay a fine of $25 levied by the union on the complaint of the girl.  This refusal to pay the fine led up to the strike.”

As could be expected, management’s version of the story was quite different: Fanny Tepper was a back-talking employee who not only had attitude, but performed poorly.  Berse’s brother explained the story saying, “The girl got fresh about her work and when my brother reprimanded her she got sassier and sassier.”

Then Fanny went too far.  “She called him an insulting word, which means swine in English.  He got excited and told her to get out.  She refused and he caught her by the arm to put her out.  It was a very warm day and everybody was perspiring and his hand slipped and her [shirt]waist was torn a little at the  shoulder.  My brother did not slap her, as he is too much of a gentleman to slap a woman.”

Fanny’s complaint led to the $25 fine levied by the union.  Meyer Berse refused to pay it, telling the union “only the courts could inflict fines and that the union should go to the courts.”  Meyer’s brother said “Then the trouble began.”

The incident erupted into a violent strike and The Sun noted that “There were several arrests of neckwear makers, all men, yesterday.” 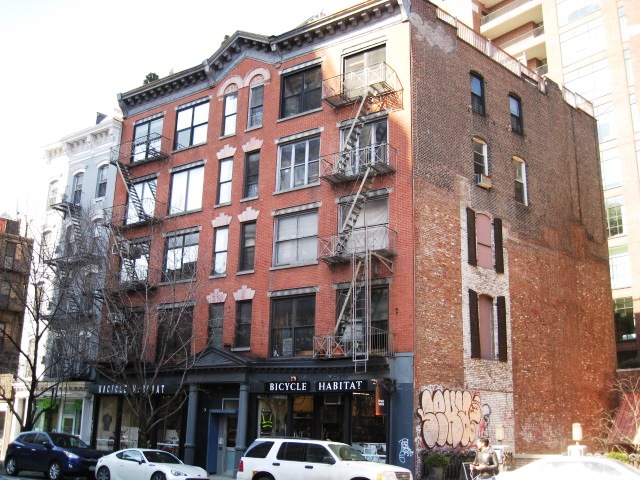 Around the same time the factory of Hampel-Lifmer was here.  In 1910 it was searching for experienced solderers to work on making metal bag frames.  The Union Art Glass and Mfg. Company was in the building until its bankruptcy in 1915.  And in June 1917 the newly-formed Desk Exchange Corp., sellers of “desks and office supplies,” moved in.

Over the next few decades the unusual mix of tenants continued: The Homestead Valve Mfg. headquartered in Homestead, Pennsylvania moved its New York office into the building in August 1920; the Caldwell Paper Co. was here at the same time; as was the Zalon Glove Co.  By 1933 the Manhattan Bookbinder Co. was here and a year later the Lafayette Motive Parts, Inc. moved in.  That firm provided “for ‘dead’ automobile storage.”

In the 1940s the building was home not only to respectable businesses like the Beacon Chemical Corp., which made household cleaning products, and the J. I. Shoe Machinery company; but to at least one not-so-upstanding operation.

Prior to the outbreak of World War II gangster Charles (Lucky) Luciano controlled an illegal lottery ring.   Targeting the working community, the gang sold lottery tickets for drawings held in Italy every Friday.  Results were printed in New York on Saturdays, the “pay-off day.”  But the war interrupted the lottery.  According to police, “During the war, with results unobtainable from Italy, the lottery suspended.”

But in 1947 things were back to normal.  The difference, now, was that Lucky Luciano had been released from prison and deported to Italy.  A new syndicate took over the ring; printing lottery tickets and preying on those who could least afford the gamble.  “As usual it flourished on the earnings of workers in the thickly populated sections of the city,” said officials.  The estimated weekly take was $5 million.

But on April 19, 1947, after weeks of investigation, a massive raid was made by plainclothed officers who “swooped down on earmarked establishments,” as described by The New York Times.  Among those operations was Gri-O Press.

“Plates, books and records were seized at the Grio-O Press, 242 Lafayette Street, which the police said is owned by Anthony Grio.”  The Times noted the irony of the Grio’s arrest.  “Not only was Grio’s printing established located in the shadow of Police Headquarters, but he is a neighbor of Commissioner Wallander as well.”

Commissioner Arthur W. Wallander did not comment on Grio specifically; but did call the sting “the outstanding series of lottery arrests in the history of the department.”

As the century drew to a close the Soho neighborhood underwent rebirth as artists rediscovered the old loft buildings.  Around 1982 Architectural Sculpture moved into one of the retail stores and in 1984 Bicycle Habitat took the other.  Rather astonishingly, the ground floor had not been modernized—the twin arcade store fronts survived as did the wonderful columned portico.

In 1993 the upper floors, once home to neckwear makers, bookbinders, and a gang-related printing operation, was converted to residential space.  On each floor were now two “joint living-working quarters."  To qualify for a loft here, the Department of Buildings noted the artists must be “certified by the Department of Cultural Affairs.”

Bicycle Habitat eventually took over both ground floor stores.  But the 21st century’s scourge of exorbitant rents may bring an end to the store’s decades-long history here.   In May 2015 the store faced what its owner deemed “sky high rents” and was considering the need to leave the building. 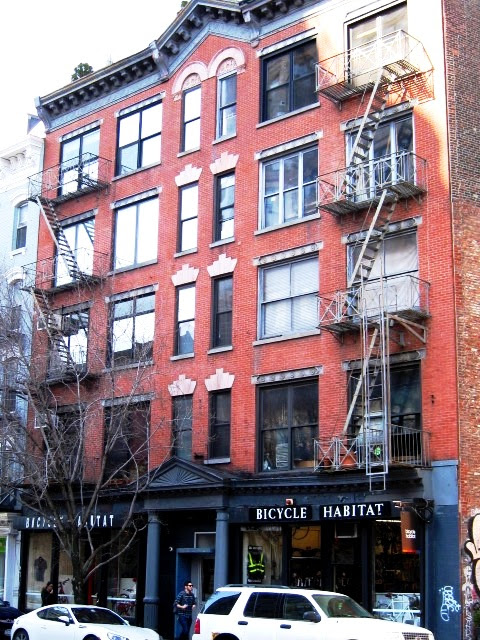