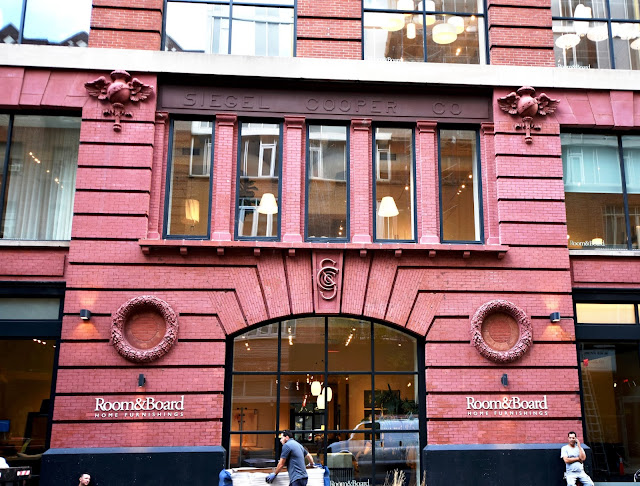 In 1902 the massive Siegel-Cooper Department Store on Sixth Avenue laid plans for a new warehouse nearby.  The store was just seven years old and had been leasing a combined store-warehouse building at Nos. 214-216 West 17th Street—a structure erected especially for Siegel-Cooper.   But by now that facility was no longer sufficient for the store’s extensive stable of horses,  delivery wagons, and large stocks of goods.

On May 18, 1902 The New York Times reported that it was the Siegel-Cooper Company who had purchased “that part of the old Colonial Brewery property running through from 249 to 255 West Seventeenth Street to 236 to 242 West Eighteenth Street.”  The large plot stretched 97 feet along both streets.  The store announced its intentions to “erect a large storage warehouse.”

Within a week De Lemos & Cordes--the architectural firm that had designed Siegel-Cooper's exuberant Beaux Arts department store building--began work on the plans for the new building.  On May 24 it announced that the five-story building would be of “steel construction, with electric elevators, etc.”

By the time of the structure’s completion the five stories had grown to seven.  Matching facades on 17th and 18th Streets were understandably understated as compared with the Sixth Avenue store.  Yet the utilitarian structure boasted its own architectural flair.  The tripartite design was defined by two thick bandcourses.  Red brick rusticated piers that rose the height of the building along with segmental arched openings at the fifth floor comprised the sparse ornamentation of the upper floors. 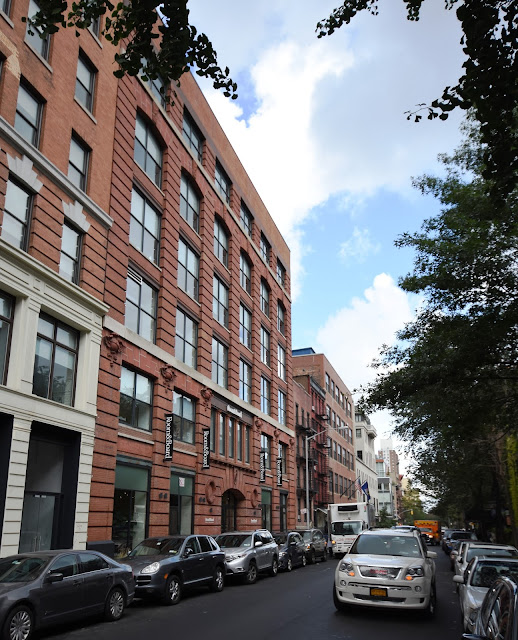 For the first two floors, however, the architects used lusty terra cotta ornaments to distinguish the façade.  Each pier culminated with winged orbs bearing a sash emblazoned with SC&Co; and the bay doors were flanked by large, intricate wreaths.  These, most likely, originally framed the supports of decorative lamps.  Terra cotta keystones over the bays included the firm’s entwined monogram.  Directly above, brick pilasters with prim terra cotta capitals supported a metal entablature that announced the store’s name. 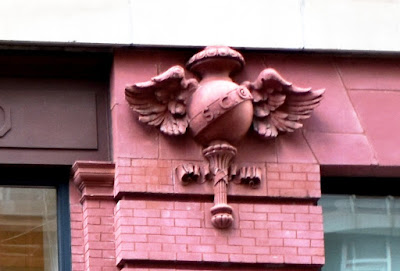 The up-to-date amenities of the 125,000 square foot warehouse went beyond electric elevators.  The Spectator, on March 31, 1904, noted “The plant is splendidly equipped with every modern fire-resisting and extinguishing appliance.”

But the same year that The Spectator made the comment Henry Siegel was in trouble.  The man who had been called “the Napoleon of the Department Store industry” had overextended himself.  The Chicago-based businessman sold the New York operation to Joseph B. Greenhut for $500,000.  Greenhut later reported that Siegel wept during the transaction.

Greenhut’s purchase of the department store came at an ill-advised time.  Already the grand emporiums of what was known as the Ladies’ Mile were abandoning Sixth Avenue, following Roland Macy’s lead.  In 1902 he had shocked New York by moving Macy's department store ten blocks north of the shopping district, to 34th Street and Broadway.

Nevertheless, Greenhut pushed on, confident that the Sixth Avenue shopping district would rebound.  His optimism was soon dashed.  By 1913 the expansive 17th Street warehouse was no longer used for storage of goods; but had been converted to the Greenhut store’s cabinet-making shop.  For at least two years 20 men worked on custom furniture here.

In 1915 the Greenhut operation failed.    On December 4 that year The New York Times reported that Gimbel Brothers, located on Greeley Square just south of Macy’s, had leased the “former Siegel-Cooper warehouse” for $25,000 a year.

Eventually Gimbel Brothers purchased the property, retaining it for decades.  But by 1940 the department store was no longer using the warehouse and had converted it to offices and loft space.  In January that year the Saxon Paper Products Company took space; and three years later when Gimbels finally sold the building The Times noted “It is now occupied by the Jewel Sales Company and the Saxon Paper Company.”

The building would be sold and resold over the next decades.  In 1949 Saxon Paper Products was still here, sharing space with the Sinco Shoe Stores.

The old warehouse building received a startling internal make-over in 1983 when Benny Zucker took over 10,000 square feet for his silk flower business.  Zucker’s family had been importing artificial flowers from China for generations.  He hired a team to transform the space—two merchandising consultants, two architects, an illustrator, a lighting and an audio specialist.

The result was a gigantic showroom for handmade flowers—mostly of silk—featuring dramatic lighting, artistic tableaux, and the sounds of ducks, crickets, birds and waterfalls.  Customers purchased the items by the stem—ranging from 50 cents apiece to $5,000 for a fake tree.

The flower showroom made way for Barneys warehouse at the turn of the century.  Here the luxury retailer offered customers discounted merchandise for more than a decade.  On February 20, 2001 Times columnist Monte Williams commented on the undisguised pipes and wires, as well as the demeanor of the warehouse sale patrons.

“Barneys with eight stores in America, is known for its Spartan civilization.  But it warehouse sale is decidedly uncivilized.”

In 2013 Savanna, a real estate private-equity firm, purchased the old Siegel-Cooper warehouse along with the adjacent building at No. 245 West 17th Street.  Vice President Kevin Hoo announced the firm’s intentions to spend $21 million to “preserve and enhance the loft-style aesthetic.”

The architectural firm Studios was commissioned to “reimagine” the buildings.  The resultant renovation preserved the original hardwood floors and exposed 17-foot ceilings, and restored the masonry façade.   Unlike so many vintage building make-overs that result in luxury housing; Savanna’s focus was on retail and office space.

It worked.  In 2013 the American home furnishings retailer Room & Board took 60,000 square feet for its flagship showroom; followed by Twitter which leased 140,000 square feet as its headquarters.  Savanna sold the building in 2014 for $335 million.
Except for the unfortunate loss of the cornice on both facades, and, of course, the sympathetic street level make-overs; little has changed to the 1902 Siegel-Cooper warehouse from which once teams of horses pulled package-filled drays to the homes of shoppers.