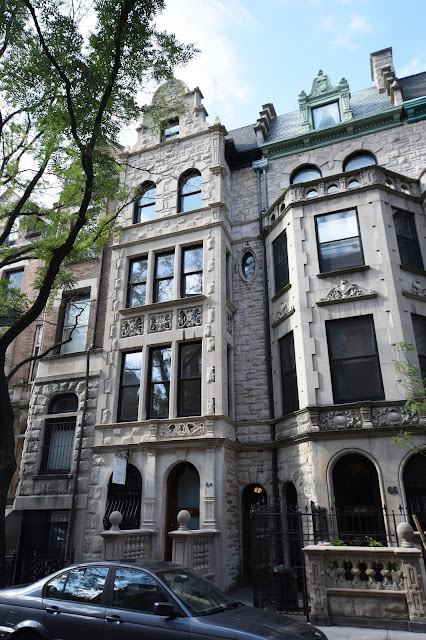 Developers of the Upper West Side of Manhattan in the 1890s architect Clarence Fagan True busy designing rows of speculative homes.    By the dawn of the 20th century he would be responsible for scores of houses that reflected his sometimes playful take on historic styles.

On September 22, 1894 the Real Estate Record and Builders’ Guide reported that True was working on yet another small row.  The newspaper told its readers that H. Ives Smith had commissioned True to design three four-story (and attic) brick and limestone dwellings.  Each would cost Ives $18,000—about half a million in today’s dollars.

True to form, Clarence True dipped into his historic grab bag, choosing Jacobean Revival for the project.  Completed in 1895, the three homes were each different; yet they worked together as a pleasing whole.

No. 64 was, perhaps, the star of the show.   Faced in rough-cut limestone, it sat aloofly back from the property line.  A four-story bay projected slightly forward, giving dimension to the façade.   Intricate carvings adorned the spandrels between the second and third floor openings.  The attic level was treated as an ornate stepped gable.  True forewent the high stoops appearing elsewhere in the area, preferring an American basement configuration.  A long, shallow stone porch with high balustraded railings led to the doorway just three steps above the sidewalk.

The upper class status of the potential buyer targeted by Ives was evident in the interior detailing--amenities affordable only by a wealthy house-hunter.  Richly carved woodwork and intricate parquetry flowed throughout the house.  Jutting into the rear yard was a 10 by 14 foot “bathroom extension.”

Ives would not wait long to find his buyer.  In April 1895, barely before the paint was dry, he sold No. 64 to Lucius Nathan Littauer.    The 36-year old was a close friend of Theodore Roosevelt, the two having graduated together from Harvard University in 1878.  At a Harvard Club dinner Roosevelt said “I want to tell you that it is a Harvard man who is my most intimate personal friend, and who is also my closest political adviser, and that man is Lucius Nathan Littauer!’

Thirteen years before buying the 87th Street house Littauer and his brother took charge of the family’s glove-making business in Gloversville, New York, renaming it Littauer Brothers.  It was there that he became interested in politics.  His friendship with Roosevelt was understandable considering their similar interests and political leanings.  Later, in 1902, The Successful American would call him “a man interested in everything of a progressive character—tax reforms, forest and stream reform, and other questions now uppermost in the public mind, and is also a well-informed man on other live subjects connected with the material prosperity of the State.”

Like Roosevelt, he was an outdoorsman.  “He loves to fish, to shoot, and it is estimated that he can put on the gloves and give his old college companion, President Roosevelt, points on boxing, even though he carries more flesh.”

Littauer and his wife, the former Flora Crawford, may have moved to New York City from Gloversville because of his growing political ambitions.  In 1897 he was elected to the United States House of Representatives—a seat he would hold until 1907.  In 1902 The Successful American said that he had become “one of the most successful leaders of the Republican organization in his section of New York State.  He is now in full control of the politics of the Twenty-second New York Congressional District.”

Having left Congress, Littauer returned to running Littauer Brothers with his brother Eugene.   In addition he was President and Director of the Gloversville Knitting Co., the Fonda Glove Lining Co., the Metropolitan Sewing Machine Co., the Glen Telephone Co.; and was a director in the State Bank, the Fulton Co., the National Bank, McIntyre Iron Co., and the Fulton County Gas and Electric Co..

The Successful American noted he had “accumulated a fortune running up into millions, but despite his wealth, he is so democratic in his tastes and habits that all worthy men are treated alike by him, be they rich or poor.”  Despite the glowing accolades, Lucius Nathan Littauer’s good name would be tainted by scandal in 1914.

When the Littauers were in Europe during the summer of 1913, Lucius purchased a diamond and pearl tiara in Venice for his wife.  He spent 30,500 lire on the piece, about $5,800 at the time and in the neighborhood of $145,000 today.  When they disembarked from the Kronprinzessin Cecilie on July 1, they passed through Customs without declaring it.

Months later wagging tongues raised the suspicions of Customs agents.  “The fact that Lucius Littauer had brought back to this country jewels of value first began to be whispered at the end of last year,” reported The New York Times on January 27, 1914, “and there were stories that the new Collector of the Port, Dudley Field Mallone, had begun a personal investigation.”

On January 26, 1914 Littauer was indicted for jewel smuggling.  He was convicted on February 4 and, while Federal District Court Judge Edwin S. Thomas suspended his six-month jail sentence, he further humiliated the disgraced former politician in his decision.  “For an ex-congressman so far to forget his oath taken five times and knowing so well the provisions of the law he helped to frame seems to be incomprehensible.”

In January 1924 Flora Litauer developed pneumonia.  After only a short illness she died in the house on January 31.  Three years later Lucius retired to devote his life to philanthropic work, education and medical research.

He donated $1 million to found the Nathan Littauer Hospital in Gloversville and he established the Nathan Littauer Professorship of Jewish education at Harvard and, later, in January 1929, he organized the Lucius N. Littauer Foundation with a gift of $1 million.  In a meeting in the 87th Street house he personally selected the directors of the philanthropic foundation.  The lofty purpose of the foundation was to further “the cause of better understanding among all mankind.”

A few weeks later, on February 13, Lucius went to Mount Sinai Hospital where Eugene Littauer lay dying.  The New York Times reported “At 2 o’clock in the afternoon, when he [Eugene] knew he was dying, he made a present to the hospital of $25,000, signing a check for that amount made out by his  brother, former Representative Lucius N. Littauer.”

Eugene Littauer died four hours later.  His funeral was held in the 87th Street house at 2:30 the following afternoon.

Lucius continued to live at No. 64 West 87th Street and his summer home in New Rochelle.  In 1935 he presented Harvard University with a gift of $2 million to establish the Graduate School of Public Administration.

That year the first storm clouds that could become worldwide conflict began forming as Italy invaded Ethiopia.  In 1936 civil war erupted in Spain and the following year Japan invaded China.  By January 19, 1940 when Littauer’s house was filled with well-wishers for his 81st birthday, World War II had broken out.

The millionaire made his political stand quite clear.  The New York Times wrote “As a birthday thought, he expressed the hope that ‘America will mind her own business in the present trouble.’”  Although an isolationist, he admitted that eventually the U.S., as “the dominating nation of the world,” would have to enforce its influence in restoring peace.

Exactly two years later, his mind had changed.   He was awarded the Phi Epsilon Pi National Service Award on his 83rd birthday for having made “the richest contribution to the essential Jewish life of America” in 1941.  The presentation ceremony was held in the 87th Street house.  During his comments, Littauer said “At this crisis of the world’s history, our determination, yes our very lives, must be devoted not to defense merely, but to victory.  The unconditional surrender of our Axis enemies should be our supreme aim; to make no alliances, no commitments, to any other end…We will never permit the Germanic hordes of barbarians to sweep down our civilization, as they did in the days of the Roman Empire, with the consequent establishment of the Dark Ages that followed.”

By now Lucius Littauer had added to his personal grants $3.1 million to Litteuer Foundation, $100,000 to the New School for Social research, and $250,000 to the New York University Medical College.

At the time Littauer had recently been diagnosed with heart trouble.  After traveling to the New Rochelle house at the beginning of summer 1943 doctors suggested he remain there.   He would never see the 87th Street house again.  On the morning of March 2, 1944 he arose and, according to The Leader-Herald, “took a walk about his estate with his house man and a maid.”   Just after returning to the house, around 8:00 a.m., he suffered a fatal heart attack.

The limestone house that had been home to Lucius Nathan Littauer for half a century was sold in Decembe4 1944 to M. Aronek.   He resold it in July 1946 to M. Wurm and L. Drucker in a deal that suggested the mansion would be divided into apartments. 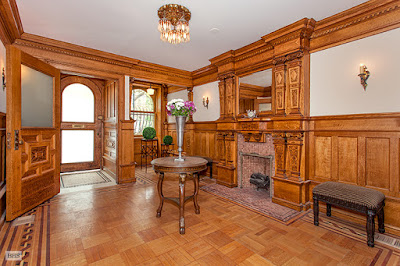 Instead, the unique dwelling survived as a single family home.  The mansion that was home to one of Manhattan’s most generous philanthropists was listed for sale in 2015 for $13.75 million.

non-credited photographs by the author
Posted by Tom Miller at 3:42 AM