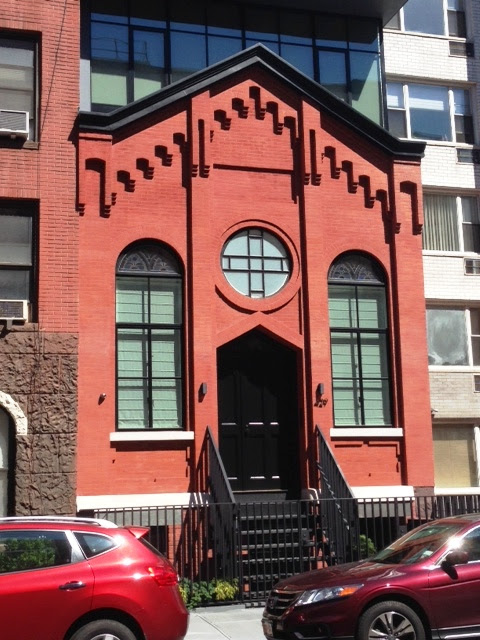 While the great bulk of Manhattan’s German-born population was centered in the Lower East Side in the 19th century; another group established themselves further north, in Yorkville.   The German immigrants brought with them their religious beliefs and practices—many, if not most, of them Lutherans.

One small group which was not of Lutheran leanings organized a new congregation in 1884.  The New-York Tribune reported on March 23 that year that “A document was recorded in the Register’s Office yesterday incorporating ‘Dingeldein Memorial Church of the Evangelical Association of North America.'”

The three original trustees of the church were John B. Dingeldein, John Steinhauser, and Jacob Steffler.  Dingeldein was the owner of an excavation and construction company.  The scope of his personal wealth can be estimated by the payment he received in August 1854 for completing a year-long project of laying sewers for the City along Third Avenue--$10,938.17.  The bill, which included Dingeldein’s “personal supervision,” would equate to about a third of a million dollars in 2015.  It was no doubt his financial status and clout within the community that resulted in the naming of the church.

The congregation did not take long to plan a permanent home.  In September 1885 The Manufacturer and Builder reported that the German Evangelical Church had commissioned architect R. C. McLane to design a “two-story brick church and Sabbath school” at No. 429 East 77th Street.

Working with a residential-sized plot only 20 feet wide, McLane produced a charmingly-diminutive brick church in the Lombardian Romanesque style.   The staid German congregation was reflected in the unassuming façade—its spare decoration in the form of a dripping corbel table below the cornice carried out in brick.

Within the church services were conducted in German, as would be expected.  The hard-working, mostly blue collar immigrant population worshiped quietly here for 35 years.  Then, in August 1920 it was announced that the Dingeldein Memorial Church of the Evangelical Association of North American had sold the building to the New York City Baptist Mission.

Organized on October 6, 1875 as the New York City Baptist Mission Society, it established mission churches throughout the city; sometimes focusing on immigrant groups—like the Norwegian Church of the East which it established in 1903.

The former German church became the Czechoslovak Baptist Church—a reflection of the changing face of Yorkville.  The neighborhood was seeing an influx of Middle Europeans—Bohemians, Hungarians and Czechs among them.  The Czech population was heavily Catholic and so the little church on 77th Street was perfectly suited for the unusual Baptist faction.

The Czechs had moved out before 1961, by which time the building had became home to the First Russian Baptist Church.   Some of the staff members of the United Nations Soviet Secretariat lived directly next door in the apartment building at No. 435 East 77th Street.  Among these was Soviet legal officer George Ragulin.

Ragulin was in his apartment, No. 7G, on the night of May 1, 1965, while his wife, Diana, took in a movie.  The couple’s two children were asleep when, for some reason, another staff member and building resident, Alexndr Bessmertnykh, went to the apartment at around midnight.

According to his story, he found the apartment door open, as well as a window.  He looked out of the window and saw the 40-year old Ragulin sprawled on the roof of the Baptist Church.  Police apparently found nothing unusual in Bessmertnykh’s story and announced that the Russian “either fell or jumped” from the seventh story window.

By now the red brick church had been painted a not-unpleasing cream with chocolate-colored trim.  But other than the ill-advised paint job, nothing had been altered.  That would all change in 2008 when the First Russian Baptist Church put the structure on the market for $4.5 million.  Real estate agents were quick to point out that it was zoned for residential conversion.

It would be a few years before the church found a buyer, but in 2014 a conversion was completed that resulted in a single family home.  The small residential extension in the rear was transformed into a looming modern addendum which, while seemingly poised to pounce on the little church, manages not to detract from it.  The façade of McLane’s charming brick church was preserved and, even with the removal of the stained glass windows, emerged much as it appeared in 1886.

photographs by the author
Posted by Tom Miller at 4:20 AM