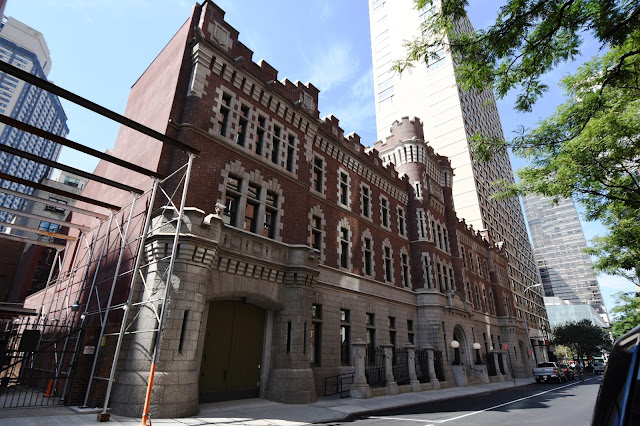 In 1881 command of the National Guard’s First Battery was given to Captain Louis Wendel.  Since the unit’s organization from Civil War veterans in 1867 (then known as Battery K), it had had only one commander, a Captain Heubner.  Now the First Battery moved to headquarters at No. 334-346 West 44th Street, over Captain Wendel’s saloon.

Composed mostly of German-Americans, the First Battery seems to have followed its own course.  According to armory historian Nancy L. Todd it had ‘its own Teutonic-inspired traditions and uniforms.”  Its new leader was highly connected with Tammany Hall figures; and in addition to his saloon he operated hotels and other “places of amusement.”

Running a National Guard unit from above a barroom would have been both inappropriate and humiliating, and it appears it was Captain Louis Wendel who most vigorously pushed for a suitable armory.   Finally, on January 17, 1900 the New-York Tribune reported that the Armory Board had received $115,681.15 from the Mayor’s office for the land needed for the First Battery Armory.  The plot was located on West 66th Street and Central Park West.

Politics came into play over the choice of architects.  Brigadier-General McCoskry Butt felt that it should be a military decision.  Tammany Hall disagreed.  A month after the land was purchased, the Tribune wrote “When the question of preparing plans first came up General Butt wanted the [Armory] Board to select the firm of architects, but the Mayor objected saying that it was the business of Commissioner Kearny.”

In fact, Tammany Mayor Robert Anderson Van Wyck, had a pet firm—Horgan & Slattery—and he made sure most city commissions went to them.  A few years later, on March 8, 1903, The New York Times flatly explained the corrupt arrangement.  “Horgan & Slattery, architects, during Mayor Van Wyck’s administration drew plans for mud scows and also got jobs on public buildings ranging from a $100 alteration to a $4,000,000 Hall of Records.  Everything artistic and inartistic was put in the way of the Tammany ‘official’ architects because they had the support of John F. Carroll and Mayor Van Wyck.”

The General was powerless to choose the architects; but was permitted to give input on the design.  The New-York Tribune noted “Mr. Kearny selected Horgan & Slattery.  General Butt objected to the first draft of the plans, and as a member of a committee, with Commissioner Kearny, he revised them.”

Horgan & Slattery took their time in producing the finished designs; a matter that annoyed the General and the rest of the Armory Board.  When the Board met in the middle of October 1900 the lack of plans ignited a fury.   General Butt protested “that the preparation of the specifications was but a few days’ work.”  Captain Louis Wendell chimed in.  The New-York Tribune said he “made strenuous objection to the long delay in beginning work on the armory.  He said that the money for the work was appropriated nearly two years ago.”

The architects were ordered to produce plans within a week.  On October 24 The New York Times reported “The filing of the plans and specifications is said to be due to a little agitation of that subject at last week’s meeting of the Armory Board.  At that time Brig Gen. McCoskry Butt called attention to the fact that the board had passed upon the plans eight months ago, and that there the matter had rested.”

It would be nearly a full year before the cornerstone was laid.  But finally, on September 21, 1901, with the foundation laid, the ceremonies took place.  The New York Times said “With picturesque ceremonies and a gorgeous display of gaily colored uniforms the First Battery of the National Guard laid the cornerstone of its new armory, in West Sixty-sixth Street, yesterday afternoon.”

All 106 members rode on horseback to the site led by Captain Wendel.  A band played and crowds listened to a short address by City Council President Randolph Guggenheimer who noted “This battery, composed mostly of German-Americans, was one of which all citizens should be proud.”
With the bank playing “Nearer, My God, to Thee,” Guggenheimer smoothed the mortar with a silver trowel, then dropped coins and other mementos into the cornerstone.  A derrick lifted the heavy stone into place as the band struck up the National Anthem.

Newspapers reported on the rising structure, estimated to cost $175,000.  “The officers of the battery claim that it will be the most conveniently arranged armory in the whole city,” reported The Times.  The proposed design included a central tower “for signaling purposes.”  Inside, the first floor housed a concrete-floored drill room, a riding ring, and offices.  Below street level were stalls for 76 horses, a 50-yard rifle range and 25-yard pistol range.  Also in the basement were “shower baths, toilet rooms, ammunition compartments, and shell, harness, and boiler rooms.” 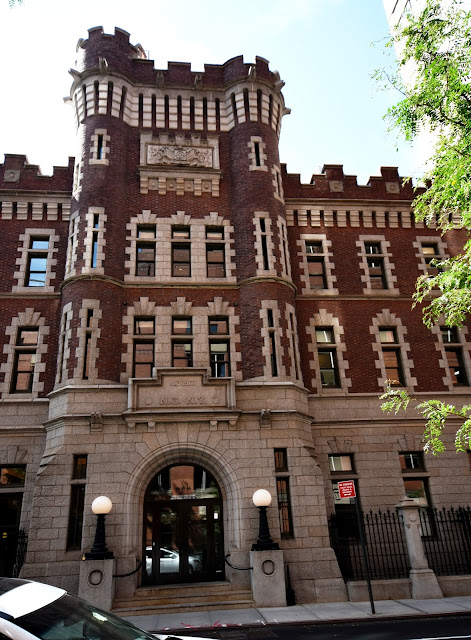 The second floor contained locker rooms, commissioned officers’ rooms, a gymnasium and a kitchen.  The third floor was dedicated to Captain Wendel’s apartment, his clerk’s apartment and a janitor’s apartment.

Finally, on February 3, 1904 the new Mayor turned over the gold key to the armory to Captain Wendel.  Horgan & Slattery’s exterior design was as much about function as it was romantic medieval fantasy.  At 175-feet wide, it reproduced a crenulated fortress with turrets, loop holes, sally ports and other elements necessary to defend the unit from siege.   The final cost of the armory--$125,000 for the land and $118,000 for the structure—would equate to about $6.7 million in 2015.

Instead of military sieges, the new armory quickly became the scene of sporting and social events.  Just three weeks after the unit moved in a most unusual demonstration took place.  On February 25, 1904 The Evening World reported that a young woman from Brooklyn, Victoria Jarvis, had accepted the challenge to ride a bucking bronco here.

The girl received permission from her parents after “she assured them that she would have no trouble in handling the animal.”  The World said “The bronco recently arrived from the West.  The animal, it is said, has unseated many good riders.  Those who have tried to master it have found the task difficult, for the animal, after going a few paces, usually throws the rider.”

Victoria’s Brooklyn girlfriends had confidence in her, saying “she has ridden many mettlesome horses.”  And the self-assured Victoria boasted to reporters “I believe I will have no trouble in retaining my seat on the bronco. I understand that he is rather a wild little animal, but that does not matter, for I am used to horses.”

One wonders if the Brooklyn girl truly understood the differences between East Coast horses and wild West bucking broncos.  Sadly, we may never know, as newspapers failed to follow-up on the story.

Two years after the armory was completed, scandal visited West 61st Street.  With Captain Louis Wendel’s Tammany Hall buddies mostly gone; his shady operations drew to a close.  On December 26, 1906 he was arrested for graft and corruption.  The Sun reported that he had been charged “as an officer of the State with having unlawfully received money for the performance of certain of his duties.”

Within two months Wendel had tendered his resignation.  The public indignity threatened the very survival of the First Battery.  Major General Charles F. Roe, commander of the National Guard of the State, wrote a letter that said in part “I have the honor to inclose herewith…the resignation of Capt Wendel from the National Guard.”  He added “The condition of the First Battery is such that I am convinced that it would be in the very best interests of the service to disband it.”

It was only through the intercession of Adjt. Gen. Nelson H. Henry that the unit was saved.  He countered that to disband the unit while Wendel’s case was pending “might tend to impair the ends of justice.”
While the ugly court case continued, the 61st Street armory added another unit, the First Field Hospital.  But, as had been the case during the Spanish-American War when Wendel offered the First Battery’s service and was denied; the members would see World War I come and go without seeing action.

Instead, throughout the war the 61st Street armory was best known as a wrestling and boxing match venue.  The events were initially staged as part of the war effort.  On November 21, 1919 the New-York Tribune noted “Major J. Franklin Dunseith, commanding officer of the First Field Hospital, New York Guard, last night appointed Billy Roche to manage a big wrestling show, which will be staged at the armory of the First Field Hospital, 56 West Sixty-sixth Street, next Wednesday night.  This show will be staged as a part of a recruiting campaign and will be open to the general public.”

But long after the war ended, well into the Depression years, the armory was still best known as a boxing and wrestling arena.  One event in particular ended badly on November 3, 1922.  Lightweight boxer Albert Press entered the ring against Castos Limperoplus that night.  The New-York Tribune reported “it was a fast mill up to the sixth, with Press getting the better of the argument.  The Greek went down four times, taking the count of nine twice.”

Then things took an ugly turn for Press.  “In the sixth he braced and as Press came from his corner, Limperoplus let fly a left hook, striking Press on the temple.  The latter was dragged to his corner unconscious.”

The following morning Press was still unconscious at Bellevue Hospital, diagnosed with a fractured skull.  His opponent was arrested “and paroled pending Press’s recovery.”

A far less violent event was the Open Exhibition of Colorful Tropical Birds and Canary Types which opened on December 3, 1949.  By now military activity in the armory was nearly non-existent.  Finally in 1976 the building was decommissioned and renovated by the architectural firm Kohn Pederson Fox for use as ABC television studios. 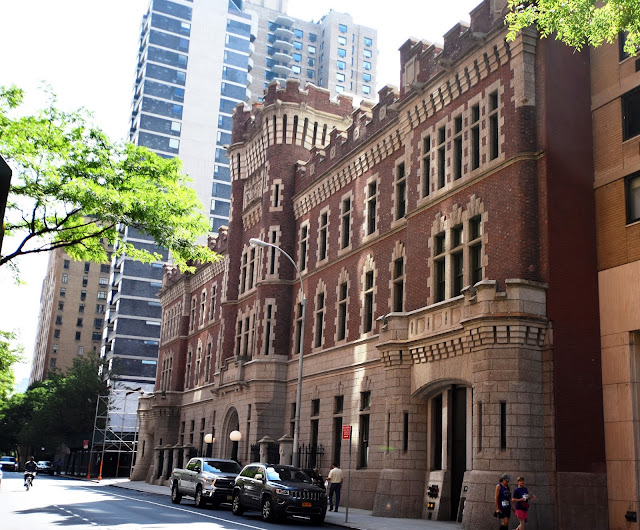 In 2003 ABC Television Network commissioned architect Cosmo Veneziale to restore the façade and create appropriate replacement windows.  The romantic fortress, with its history of corruption, scandal and tepid function as a military facility, stands as a colorful side note in the history of the Upper West Side.

photographs by the author
Posted by Tom Miller at 3:53 AM