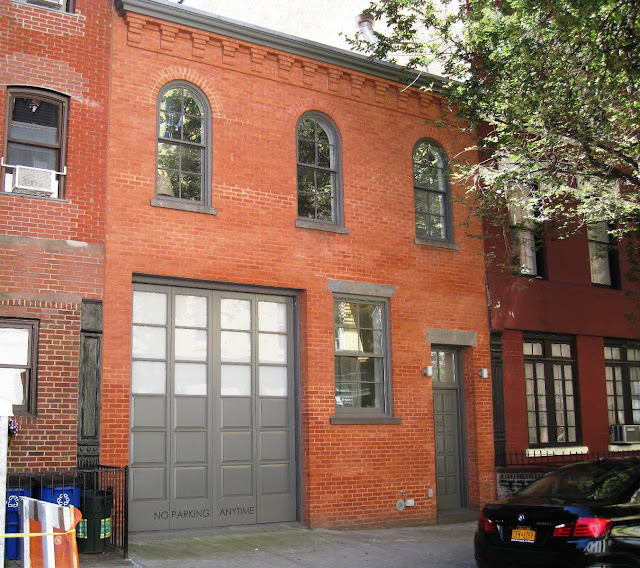 In the 1850s John Montgomery and his wife lived in the wide home at No. 22 Jane Street.  In 1851, a full decade before the outbreak of civil war, Mrs. Montgomery flexed her patriotism through her position as manager of the Ladies’ Union Aid Society of the Methodist Episcopal Church.

The Montgomery house was gone in 1868, replaced by Calvin Demarest’s stable.  Built by Charles H. Demarest, assumedly a relative, the two-story structure featured handsome elements like the graceful arched windows and the especially attractive brick corbels that upheld the cornice.  The large number of stalls--there were 31 in the cellar and first floor—suggests that Demarest operated the building as a livery stable rather than a private carriage house.  On the second floor were living quarters for stable hands. 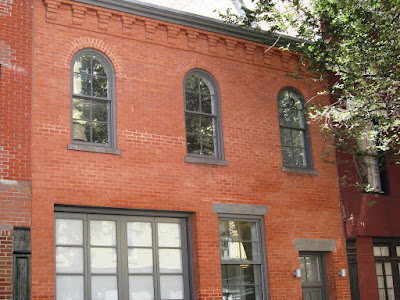 For the rest of the century the red brick structure functioned as intended, bringing little attention to itself.  Modern amateur historians routinely attach Chicago billiards champion Calvin Demarest to the carriage house; however the Midwestern pool sharp was born nearly two decades after the stable was built, and half a continent away.

Following the Greenwich Village Demarest’s death, his estate leased the stable to Dr. P. McInerney, a “veterinary surgeon.”  The doctor renewed his lease in the spring of 1913.  The Demarest family retained possession of the building until June 1919.  Interestingly, as late as 1921 when automobiles had taken over the streets of Manhattan from horses, the property was still referred to as a “two-story stable.”

That changed by 1930 when the Demarest stable was converted to a “storage and shipping” concern with its offices on the upper floor.   Eight years later the ground floor had become a “three-car garage.”  The cellar was used for storage and there was a studio apartment on the second floor.

Throughout the rest of the 20th century the building was used for decidedly unglamorous purposes—including a plumbing supply shop at one point.  Changes came when artist Jim Dine purchased it in 1997 as his studio.  Then a 2004 make-over resulted in a 3,800 square foot private home. 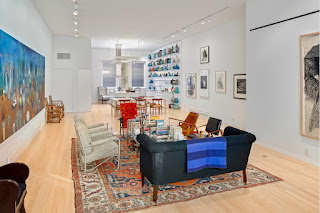 Happily, the gut-renovation to a luxury residence (it was offered for $9.1 million in 2013) preserved the utilitarian exterior.  Calvin Demarest’s stable—which surely offended the residents of Jane Street in 1868—endures as a delightful architectural gem.