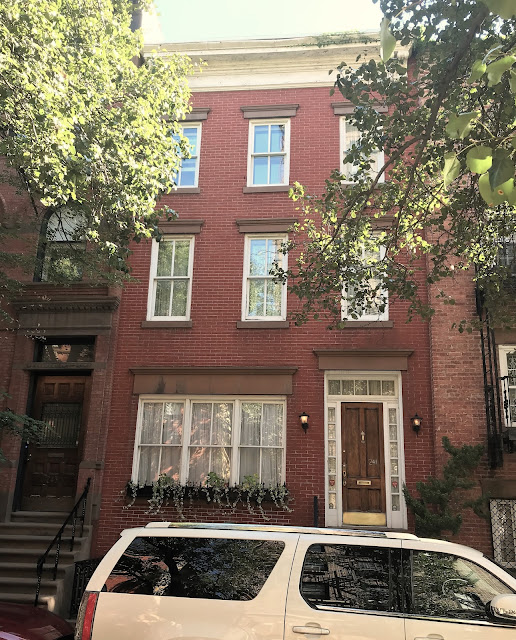 In 1876 architect Thomas H. McAvoy designed a 20-foot-wide house for William A. Ballantine.  Completed the following year, the Italianate style dwelling drew inspiration from houses built a generation earlier.  Three stories tall above the basement level, its entrance was unusual for the style--a simple door flanked by sidelights and topped by a transom and molded lintel.  Also unexpected was the Italianate cornice, with paired brackets at the far ends and none between.
It appears that Ballantine erected the house as an investment.  He and his family lived at 47 Barrow Street.  They were still listed at that address in 1886 when Louisa Kick was operating 241 Waverly Place as a boarding house.  Among her boarders that year was Theodore Schafer, an attorney.
At the turn of the century, the occupants were both working- and middle-class.  In 1900 R. Wells was looking for a job as a cashier.  His advertisement read:  "Cashier, &c.--By experienced young man of 20, as cashier, cigar clerk and bookkeeper in hotel restaurant or cafe."  A year later G. Maneschi advertised for positions for himself and his wife.  "Butler-Maid--By man and wife, in family; highly recommended; capable in every particular." In 1938 the house essentially retained its original appearance.  image via the NYC Dept of Records & Information Services.
In January 1915, Evelina Ballantine transferred title to the house to her daughter, Evelyn.  After having been in the Ballantine family for 45 years, Evelyn sold it in September 1921.
Renting a room here in 1935 was 20-year-old Lamont Nonman.  In June that year he was committed to the Manhattan State Hospital on Wards Island.  After five months of confinement, on November 20, Nonman was discovered attempting to escape from a second floor window.  He overpowered the guard and, according to The Sun, "his dash for liberty followed.  A two-hour search ended when Captain Patrick Dehan of the steamboat Welfare, a Department of Corrections vessel, discovered Nonman clinging to a log in the East River, between East 78th Street and Welfare Island.  The patient was taken to Metropolitan Hospital where he was treated for "submersion and shock."
A renovation completed in 1939 resulted in two duplex apartments.  At the time, the first floor windows were replaced by three grouped openings joined by a single lintel.  Molded caps were added to the upper floor lintels that matched the surviving example above the entrance. 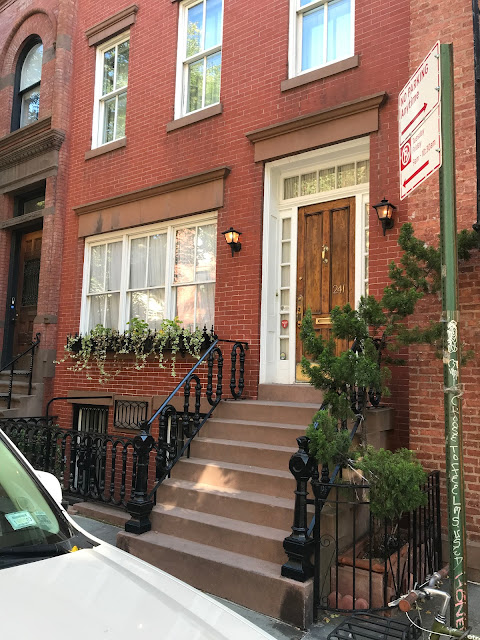 The apartments became home to professionals, like attorney Clark Cummings, here in the 1980's.  Admitted to the bar in 1959, by 1988 he was a member in the law firm of Kelley, Drye.
There are still two duplex apartments in the charming house today.
photograph by the author
no permission to reuse the content of this blog has been granted to LaptrinhX.com
Posted by Tom Miller at 1:00 AM