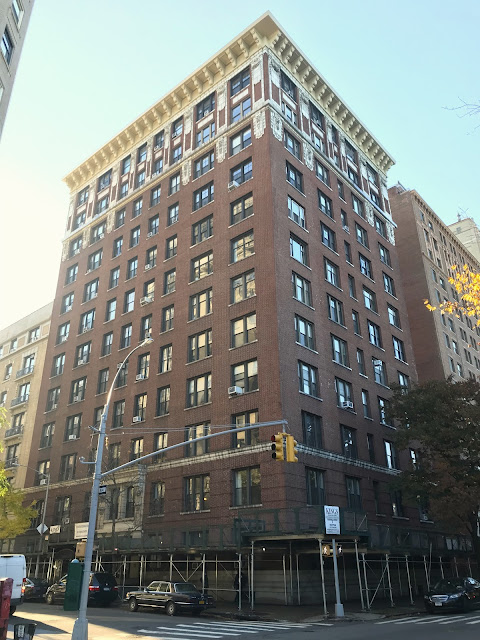 The sweeping Hudson River views and handsomely landscaped Riverside Park made Riverside Drive one of the most desirable residential thoroughfares in the city.  By the first decade of the 20th century, upscale apartment buildings were rising among the the drive's opulent mansions.  In 1910 the Charter Construction Co. began construction of one such building, at the southeast corner of Riverside Drive and West 88th Street.
Designed by the firm of Schwartz & Gross, the 12-story,  Renaissance Revival style structure was completed in 1911 at a cost of $275,000 (about $8 million in 2022).  Faced in deep red Flemish bond brick, the building's eight-story midsection was essentially unadorned.  The two-story top section made up for that with ornate terra cotta panels and swags.  A bracketed cornice crowned the design. 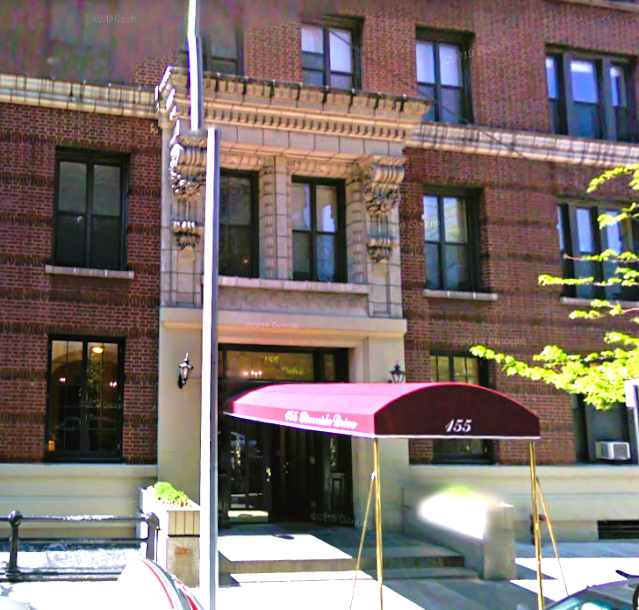 The elaborate two-story entrance is executed in terra cotta.
Although the entrance opened onto West 88th Street, the building took the more impressive address of 155 Riverside Drive.  There were just two apartments per floor--one with "nine rooms, three baths and thirteen closets," according to an advertisement, and the other containing ten rooms, three baths and sixteen closets.  Schartz & Gross ensured light and ventilation to all rooms by reserving a 25-foot wide yard between this and the building on 87th Street, and inserting a courtyard at the rear. 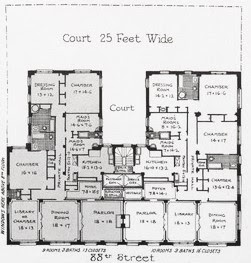 The World's New York Apartment House Album, 1911 (copyright expired)
Among the initial residents were the Oppenheimer family, who lived on the 11th floor.  Julius Oppenheimer was born on May 12, 1871 in Hanau, Germany, and arrived in New York in 1888.  He was employed in the warehouse of Rothfeld, Stern & Company, a textile importing company run by relatives.  Although the young immigrant spoke no English and had no money upon his arrival, by the turn of the century he was a partner in the firm. 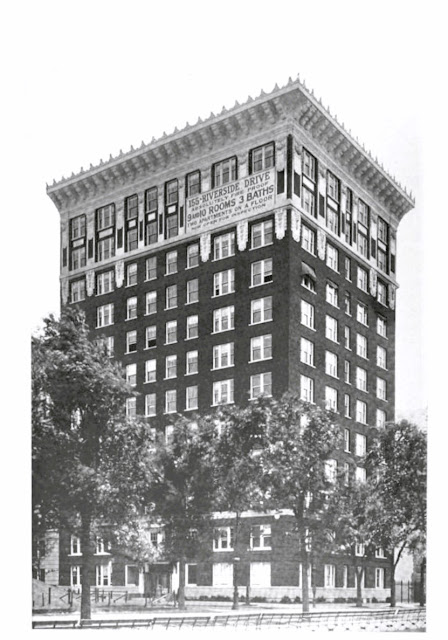 A large banner advertises apartments in 1911.  The Edison Monthly, July 1911 (copyright expired)
Julius had taught himself to speak English and eagerly read about American and European history.  He spent his free time browsing the city's art galleries and it was possibly in one of them that he met artist Ella Friedman.  Ella had studied art at Barnard College and in Paris, where she focused on Impressionism.  The couple married on March 23, 1903.  When they moved into 155 Riverside Drive they had a seven-year-old son, J. Robert Oppenheimer.  A second son, Frank Friedman, would be born on August 14, 1912.
The boys would grow up among privileged surroundings.  Their parents owned a chauffeur-driven Packard, and the Oppenheimer apartment was hung with magnificent modern artworks.  According to Kai Bird and Martin J. Sherwin in their 2005 American Prometheus: 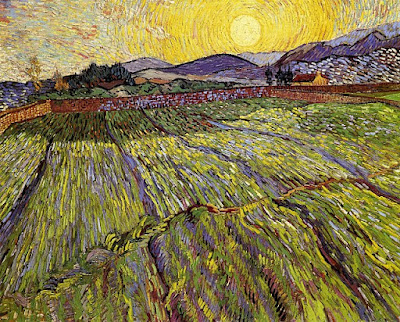 Van Gogh's Exposed Field with Rising Sun hung in the Oppenheimer's living room. from the collection of  Sammlung R. Oppenheimer
Like the other residents of 155 Riverside Drive, the Oppenheimers maintained a summer estate.  Theirs was at Bay Shore, Long Island, where Julius moored his 40-foot yacht, the Lorelei.
Among the Oppenheimers' neighbors was George S. Ward, the president of the Ward Baking Company.  On the night of October 5, 1917, his chauffeur, 30-year-old Samuel R. Douglas, took out the Wards' automobile.  He picked up three friends and went on a spree that would end tragically.
At 2:00 in the morning, Douglas smashed the touring car into an elevated railway pillar at Jerome Avenue and 206th Street in the Bronx.  Julius Becker, who was 23, and John Hardy, 21-years-old, were killed.  Douglas suffered a compound fracture of the left leg, and his other passenger, Emil Mosbacher, was taken to the hospital to be treated for shock.  The New York Times reported, "Mr. Ward told the police that the chauffeur had taken the machine without permission."
Jennie C. H. Denton, who lived here by the mid-1920's, was the widow of Waldo E. Denton.  She maintained a country home in Greenwich, Connecticut.  In September 1927 she became enraged with her broker and lawyer, Herman W. Booth.  Jennie had entrusted him with $150,000 in bonds (more than $2.3 million today), and when she requested that he return them, he disappeared.
If Booth had anticipated that he was dealing with a feckless widow, he was mistaken.  Jennie Booth filed a missing person complaint and actively joined in the search.  In the meantime, in Booth's absence he was expelled from the Stock Exchange.  Rumors swirled that he had committed suicide.  Then, on September 30, Jennie burst into his downtown office and found him.  The New York Evening Post reported, "Mrs. Denton herself made the arrest yesterday and, accompanied by a detective of the Missing Persons Bureau, escorted Booth to Police Headquarters.  He was locked up charged with grand larceny."
By the 1930's, J. Robert Oppenheimer had become a professional physicist.  His brother Frank, upon Robert's nudging, followed his lead.  During World War II Robert became the director of the Los Alamos Laboratory in New Mexico, where the Manhattan Project was initiated.  Its mission was to design and build the first atomic weapons.  Frank worked on uranium isotope separation at the University of California Radiation Laboratory.  In 1943 he joined the staff at Los Alamos.
Two years earlier, the sprawling apartments of 155 Riverside Drive had been divided.  There were now five apartments per floor.
Living here in the second half of the century were Isidor Palca and his wife, the former Eva Lipka.  The couple had a son, Alfred, and daughter Rosalind.  Isidor was born in Poland and came to America in 1906, serving in World War I.  A former diamond merchant and founder of the Diamond Dealers Association, he retired in 1962.
Born on March 23, 1920, Alfred Palca graduated from New York University in 1940.  While studying there, he began writing for NBC radio.  After serving in World War II, he became a publicity agent for 20th Century Fox.  But his passion was writing.  In 1950, Columbia Pictures agreed to finance his screenplay, Go, Man, Go! about the Harlem Globetrotters.  He hired an aspiring actor, Sidney Poitier (who was running a barbecue ribs shop in Harlem at the time), to star in the film.
The bottom fell out when the F.B.I. accused Palca of being a Communist.  His project was developing during the McCarthy Era, known as the Second Red Scare.  Palca insisted he was never a Communist, but, according to Dinitia Smith of The New York Times in 1998, "In fact, Mr. Palca said, part of the proof that he was a Communist, the F. B. I. told him, was that he had hired Mr. Poitier, a black man."
After the accusations, Palca told Smith, "My career was phhhtt."  The film was released in 1954 with Palca's name removed.  (His credit would be restored in 1997 at a ceremony honoring blacklisted Hollywood writers and directors.) 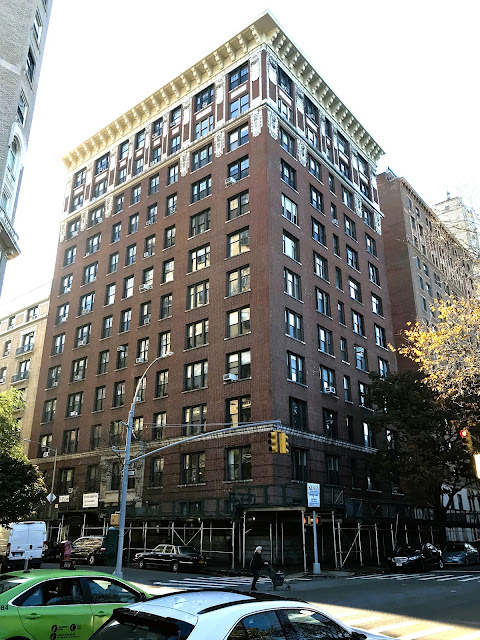 A renovation to 155 Riverside Drive completed in 1993 combined several spaces into duplex apartments.   From 1998 to 2006, the building served as the exterior of the apartment of Will Truman and Grace Adler in the popular television series, "Will and Grace"
photographs by the author
no permission to reuse the content of this blog has been granted to LaptrinhX.com
Posted by Tom Miller at 1:00 AM