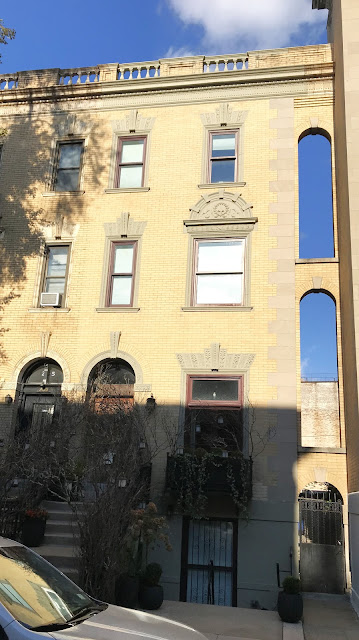 Vertner Woodson Tandy entered Tuskegee Institute to study architecture in 1904.  A year later he transferred to Cornell University.  There he and seven other students established Alpha Phi Alpha fraternity on December 4, 1906, to promote a bond and fellowship among Black collegians.  It was the first intercollegiate Greek-letter fraternity especially established for Black men.
Upon graduation, Tandy became the first African American registered architect in the State of New York, and the first Black architect to gain membership into the American Institute of Architects.  In 1919 he and his wife, Sadie, moved onto West 139th Street, in a section of homes built in 1891 as the King's Model Houses.
At the time, Louis C. Jacob lived a block away, at 203 West 138th Street.  This block, like the one onto which the Tandys moved, was developed by David H. King, Jr.  An extension of King's ambitious project, these homes were designed by architects Bruce Price and Clarence S. Luce in a creative take on the neo-Georgian style. 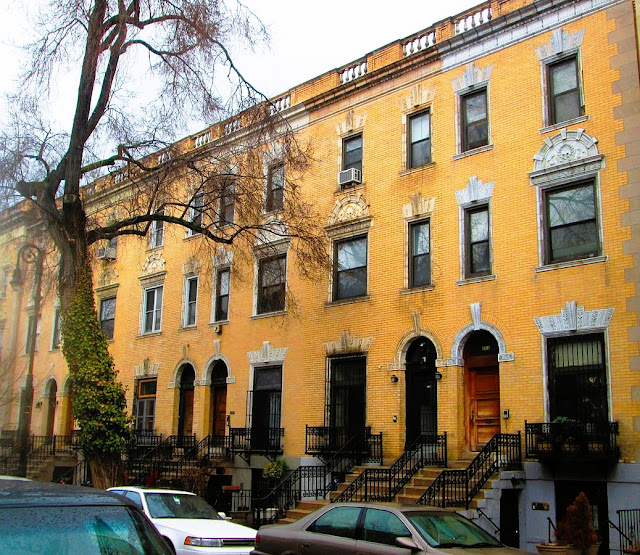 203 West 138th Street is at the far right.  photograph by Beyond My Ken
Like its neighbors, the Jacob house was face in beige brick and richly trimmed in white terra cotta.  Three stories tall above an English basement, its single-doored arched entrance sprouted a dramatic, elongated keystone.  The splayed lintel of the parlor window was composed of alternating, foliate terra cotta sections, matched by smaller versions above all but one of the second story openings.  The exception, at the second floor, was crowned by a lintel in the form of a fasces, and an arched panel with a wreath and garlands.  Above it all was a brick parapet with balustraded openings.

In 1923 the Eta Chapter of Alpha Phi Alpha acquired the Louis C. Jacob house.  The branch of the fraternity founded in part by its now-neighbor, Vertner Woodson Tandy, had been established on June 5, 1909 on the campus of Columbia University.  The chapter was known as "The Jewel."
On December 29, 1923, The New York Age reported:

Eta Chapter of this city holds a very important position in the organization, having been awarded the 'McGhee Cup' for efficiency and progress at the last convention in St. Louis, Mo.  This year it has also made single progress as evinced in the securing of the beautiful home at 203 West 138th street, as the Chapter House.

In 1926 the chapter initiated a series of meetings in the house to "present prominent people to residents of the community," as explained by The New York Age on April 24.  The first to speak here was W. P. Beazell, managing editor of The New York World, on April 23.  The newspaper noted, "Well-known men and women of the race were in attendance."  Perhaps as interesting as Beazell's speech about current-day wages, was Ralph E. Mizelle's short talk.  The president of the Eta Chapter, he told the audience about the "go to high school and college" movement fostered by Alpha Phi Alpha.
As was the case with almost every fraternity chapter house, to help with finances, rooms were rented on the upper floors to members, very often alumni.  Living here at the time of Beazell's speech was Claude Thurston Ferebee.  (He had been elected the chapter's secretary in January that year.)  Ferebee had entered Columbia's dental school in 1924.  An all-around athlete, he was also a member of the French Club, the Dramatics Club and the NAACP.
While living here, Ferebee met Dorothy Boulding, a 1924 graduate of the Tufts University School of Medicine.  The couple was married in 1928, a few months before Ferebee graduated as a doctor of dental surgery on June 4, 1929.  Ferebee joined the staff of Howard University's dental program, and his wife became a professor in the school's medical school.  Dorothy Boulding Ferebee would go on be a member of the executive board of UNICEF, of President John F. Kennedy's Council for Food for Peace, and the President's Children and Youth Council. 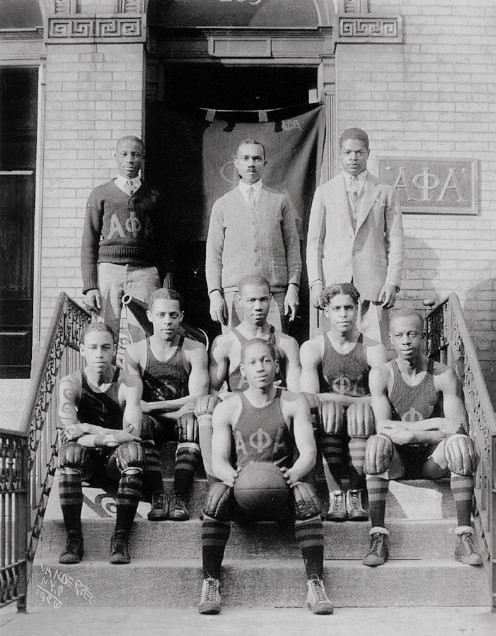 photograph by James Van Der Zee
Alumnus Dr. I. A. McGowan broke racial barriers in 1926 while living here.  On May 1 that year The New York Age began an article saying, "The fight to have colored internes [sic] named for duty at Harlem Hospital has at last been won."  The hospital had barred Black interns until the arrival of a new superintendent, Dr. Rudolph Rapp, in March.  Neither Rapp nor McGowan was naïve about the challenges the intern would face.  Rapp told reporters that McGowan "would be given every opportunity to make good, and that he would be protected in every way possible from any attempt to subject him to unfair or prejudicial conditions because of his color."
The nation and, perhaps, Blacks in particular, were divided on the issue of Marcus Garvey's incarceration on mail fraud charges in connection with his Black Star Line of ships.  In March 1927 a reporter from The Daily Worker interviewed an Alpha Phi Alpha member, A. M. Smith, in the West 138th Street house.  Smith was unsympathetic, saying "The government was justified in imprisoning Mr. Garvey for fraud."  A fraternity brother who quite possibly did not agree was Clarence Benjamin Curley.  He had been the general accountant and secretary for Garvey's Black Star Line.
Within a year of Smith's interview, Curley and his wife, Alma Zola Duncan, purchased 203 West 138th Street.  Born in Memphis, Tennessee, Curley had helped lead the movement to establish the Black officers' training camp at Des Moines, Iowa during the war.  He received his masters degree from New York University in 1922.  The year that he and Alma moved into the 138th Street house, he founded the National Negro Fraternal Association, a life insurance firm.  On August 18, 1928, The New York Age noted, "There are some strong organizations of his kind among the other races, but this is the first among Negroes in the State."  The article said that "since this is a New York institution, [it] makes Mr. Curley's effort a valuable contribution to the business awakening in Harlem."  Curley ran the operation from the 138th Street house. 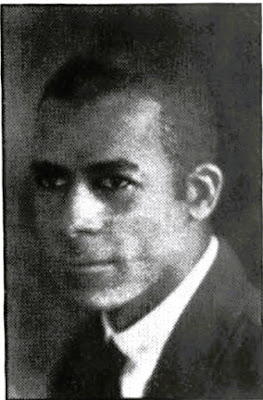 C. Benjamin Curley, The Crisis 1939
Within a few months Curley established the People's Credit Union here, as well.  It was the only Black-owned financial institution in New York City chartered by the State, according to Negro World in 1932.
While his family (he and Alma had four children) remained in the upper floors, in 1935 Curley leased the basement and parlor levels of the house to Lorenzo "Lonnie" Debman.  On February 9, The New York Age reported that the "progressive young businessman" had established "an up-to-date funeral home at 203 West 138th street." 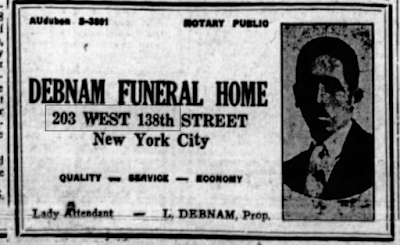 The New York Age, May 4, 1935
The Curley family remained in the house at least through 1942.  By now Clarence Benjamin Curley had made an enormous impact on Harlem and the Black community at large.  He had been greatly involved in the Colored Merchants' Association and in 1930 he and Alma established Rainbow's End, the first summer camp for Blacks in New Jersey.
Another influential figure in the Black community was Charles Seifert.  Born in Barbados in 1871, his father was a plantation overseer.  As a child Seifert read his father's books on African history, most of them written before slavery.  In 1910 he dedicated his life's work to preserving African American history.  Working as a contractor, he bought books, manuscripts and other documents, eventually compiling what he named the Ethiopian School of Research History.  By the time of his death in 1949, his library included thousands of volumes.  (Reportedly Marcus Garvey had accessed Seifert's library so intensely that for a time he moved into the Seiferts' home.)
Soon after his death, Seifert's widow, Goldie, moved the Charles C. Seifert Research Library into 203 West 138th Street.  On June 10, 1950, The New York Age reported "the Charles C. Seifert Historical Research Association, Inc., held open house at the Charles C. Seifert Library, 203 West 138th Street, New York City, recently."  The article said, "An overflow crowd of former students, friends and persons interested in research gathered to pay homage to the life work and character of the late Charles C. Seifert, research historian and founder of the library."
The library was the scene of lectures and other educational functions.  On October 7, 1950, for instance, The New York Age reported it hosted Dr. William Leo Hansberry, "eminent Howard University archaeologist and anthropologist, in a series of seven lectures of Africa beginning Saturday, October 7th, and continuing every other Saturday until February, 1951."  The article added, "The Seifert Research Library is as extensive in the books, pamphlets and materials it contains as the original Schomburg Collection, now part of the New York Public Library."
By 1973 the Negro Book Club, Inc. was headquartered at 203 West 138th Street.  The Black periodical News Illustrated was published from the address as the time.

A renovation completed in 2021 returned the house--so important to Black history in New York City--to a single family home.  At the time the facade and its terra cotta decorations were restored.
photograph by the author
many thanks to Mark Satlof for his valuable input
LaptrinhX.com has no authorization to reuse the content of this blog
Posted by Tom Miller at 1:00 AM