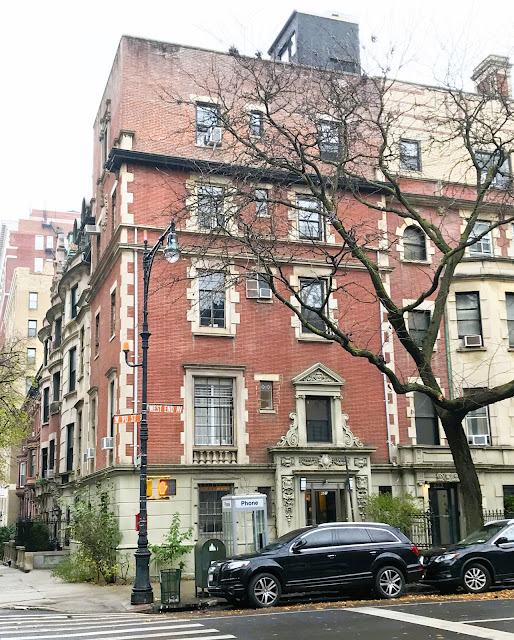 Upon the death of Terence Farley, described by the Real Estate Record & Guide as "one of the most active builders in this city," his sons, John T. and James A. Farley, took over the business.  Operating as Terence Farley's Sons, they continued to make a significant impact on the development of the Upper West Side.
Typical of their high-end work was the row of seven upscale homes that wrapped the northwest corner of West End Avenue and 90th Street, completed in 1899.  They sat within a neighborhood that was filling with opulent residences.  Designed by prolific architect Clarence F. True in the Elizabethan Renaissance Revival style, the homes drew praise from the Real Estate Record & Builders' Guide, which said, "The architect, Clarence True, has had a large experience in domestic architecture, but nevertheless, this is the best design that has ever left his boards." 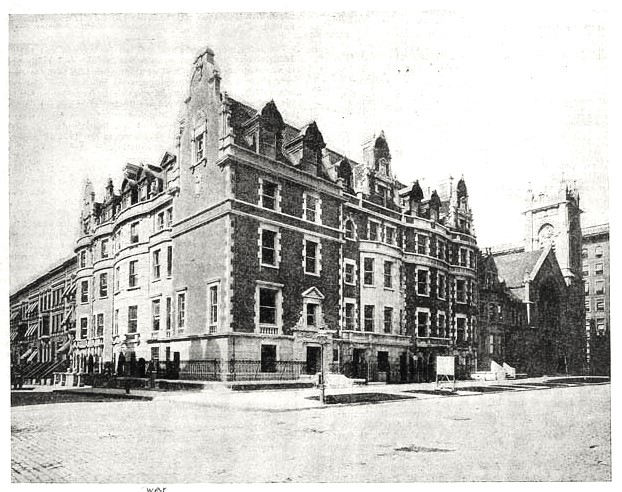 The group wrapped the corner, with 621 West End Avenue stealing the spotlight.  Real Estate Record & Builders' Guide, October 7, 1899 (copyright expired)
The corner house, 621 West End Avenue, was the showpiece of the group.  At 32-feet-wide on the avenue and 40 feet long on West 90th Street, the five-story structure was intended for a wealthy buyer.  The entrance sat within an ornate stone frame decorated with Renaissance style carvings.  Its cornice supported a pedimented window flanked by serpentine volutes.  True took advantage of the corner site by tucking the service entrance to the back of the house, on West 90th Street. 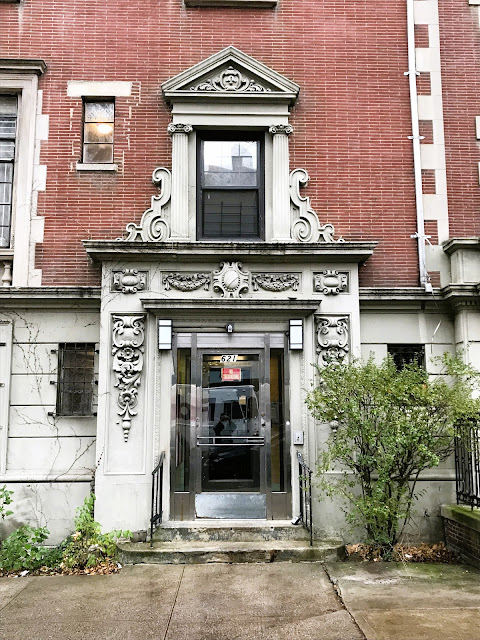 While the expertly-crafted stonework survives, the door and window above it are unsympathetic replacements.
The four upper floors of red brick were trimmed in limestone.  Below the fifth floor window on the 90th Street side was a large, carved stone cartouche and above it a was a dramatic Flemish gable.  Two large dormers pierced the peaked roof on the avenue side.
The Record & Guide supplied a hint of the interiors of the row, listing "separate servants' entrances, kitchens, laundries, parlors, drawing-rooms, dining-rooms, butlers' pantries, connected and separate bedrooms, dressing salons, bathrooms, secluded servants' quarters with bathrooms, rear stairs and all other requirements of a first-class dwelling."  The journal added, "A lavish use of beautiful woods, marbles, tiles, plate and colored glass, under artistic guidance, evidence the expenditure of the greatest care and generous use of money to produce the best possible results from both the aesthetic and practical points of view."
Thomas P. Hughes purchased 621 West End Avenue.  A stockbroker, his residency would be comparatively short-lived.  In 1904 he sold it to Harry Wiggin Bennett and his wife, the former Agnes Pattie Smith.  Born in Alton Bay, New Hampshire on February 6, 1866, Smith and Agnes had married in 1891.  When they moved in they had two sons, 12-year-old Tom Wiggin, and 9-year-old Dick Woolson.  Another son, Harry, Jr. would come along in 1907.
Bennett had recently arrived in New York City.  For six years he and the family lived in Mexico where he was the manager of the Woolson Spice Co.  Now in New York, he established the banking firm of H. W. Bennett & Co.  He was, as well, the president and a director of the Cuba Eastern Railroad, the Northeastern Cuba Railroad, the North River Improvement Co., and a director in several other corporations.
Annually included in Dau's New York Blue Book of society, the Bennetts maintained a country home, Great Hill, on Buzzard's Bay in Marion, Massachusetts.  The family summered there until 1909, when they sold it to millionaire Galen Stone, who erected an even more lavish mansion, also named Great Hill, on the estate.  Four years later they also gave up their West End Avenue mansion, moving into a nine-room apartment on West 106th Street.
Moses Charles Migel and his wife, the former Elisa Parada, purchased 621 West End Avenue.  Elisa was born in Santiago, Chile in 1877 and she married Moses in 1906.  The couple had three children, Parmenia, John Charles and Richard Howell.  Their summer home, Greenbraes, was in Ramapo Hills in the mountains of New Jersey.
Migel was a fascinating figure.  A retired silk dealer, his parents had been married during the Civil War and initially lived on Canal Street.  But Solomon Migel's asthma forced him to relocate his family to Texas, where Moses was born on November 3, 1866.  Following Solomon's death, Moses's mother brought the children to Brooklyn, and by the time he was a teenager, he and his siblings were orphaned.
Moses and his brother somehow managed to get into the silk business, and by the turn of the century had a Greene Street office and a warehouse in Long Island City.  Moses Migel's fortune grew when, during World War I, he formed an import firm, the Allied Silk Trading Corporation, to bring silk fiber from China and Japan for the manufacture of cartridge cloth needed by the War Department.
It was that work that began Moses's involvement with the blind.  After the Armistice, he accepted the position of overseeing services for American servicemen blinded in battle who were still in French hospitals.  Upon his return to the United States, he served on the Committee of Direction of the Red Cross Institute for the Blind. 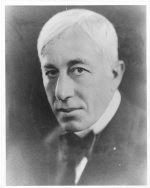 Moses Charles Migel (original source unknown)
Moses became highly involved with the American Association of Workers for the Blind, and in 1914 was treasurer of the Uniform Type Commission, formed to perfect an American system of braille.  He was reportedly the sole source of funds for that commission.
In 1923 Moses and Elisa purchased a five-acre parcel adjoining their summer home.  There they developed Rest Haven, a free vacation home for blind women.  Transportation to-and-from New York City was also gratis.  By now Moses was the chairman of the New York State Commission for the Blind. 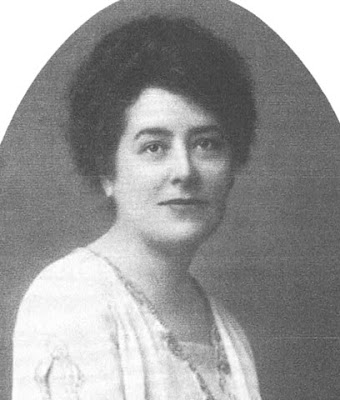 Elisa Parada de Migel (original source unknown)
In 1924 Elisa traveled to Chile and visited the Santiago College, a Methodist boarding school for girls where she had spent her formative years.  She and Moses donated $150,000 to the school for the construction of new structures and Elisa became president of its Board of Trustees.
By then, the Migels had been gone from West End Avenue for four years.  They sold the house in April 1920 to Juan Cortada.  In reporting the sale, the Record & Guide noted, "The house was free and clear and was sold for all cash." In 1941 the house was virtually unchanged.  image via the NYC Dept of Records & Information Services
Juan and Rita Cortada had two daughters, Josephine and Rita, and a son, George.  As some point following Juan's death in 1929, Rita moved to their summer home in Deal, New Jersey.
In 1950 a renovation was begun to convert the mansion into apartments.  Completed the following year, the building's fifth floor had been replaced with a crisp brick box.  Clarence True's gable window on 90th Street was the sole survivor of his dramatic top floor design.  A pair of windows were punched into the third and fourth floors on this side, as well.  There were now two apartments per floor.  A subsequent renovation in 1955 provided two doctors' office spaces on the ground floor.
John Miller lived in an apartment here in the 1960's.  The military veteran was described by The New York Times on October 13, 1964, as "a tall, burly man of 58 and is a father."  John was walking near 91st Street and West End Avenue on the afternoon of March 24 that year when he was arrested on a vagrancy charge by Detective Daniel Koegh.  The problem was not that Miller was a vagrant--it was his outfit that bothered the detective.  According to Koegh in court a week later, "his prisoner had been wearing a brown, two-piece woman's suit, high heels and a fur cape.  He was carrying a purse.  On his head was a gray wig, and on his face, lipstick and powder."
In arresting Miller, who sometimes went by Joan, Koegh had relied on an 1845 vagrancy statute that made it illegal for a person to appear in public with "a face painted, discolored or covered or concealed or being otherwise disguised, in a manner calculated to prevent his being identified."
The American Civil Liberties Union struck back, calling the arrest of someone who "has done nothing more than wear the clothing of the opposite sex" unconstitutional.  Entering the case as a Friend of the Court, the ACLU purported that Koegh had not arrested Miller for vagrancy, but "because of distaste for his behavior."
Given Moses C. Migel's work, it is appropriate that around 1969 the office of the Elbee Audio Players opened in 621 West End Avenue.  Headed by David Swerdlow, one publication said it performed "contemporary plays like Marty and A Majority of One, dramatically read by blind actors."  It was still operating from the address in 1988, when Resources in Theatre and Disability wrote, "Blind and sighted performers make up this repertory troupe that [performs] in the greater New York area." 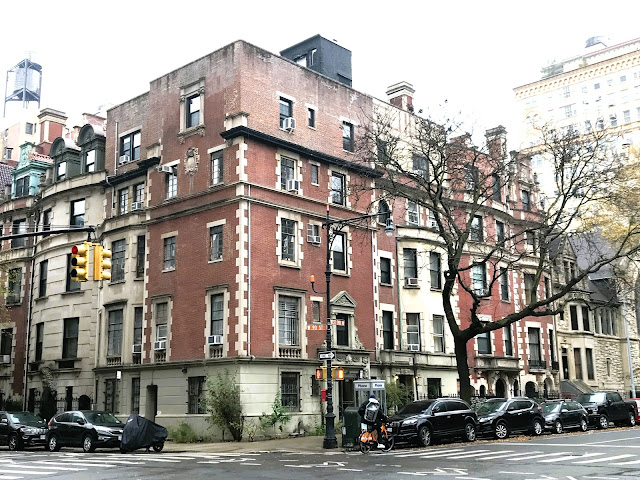 Once an architectural grand dame in the neighborhood, the 1950 butchering of 621 West End Avenue makes it easily passed by, unnoticed, today.
photographs by the author
no permission to reuse the content of this blog has been granted to LaptrinhX.com
Posted by Tom Miller at 1:00 AM