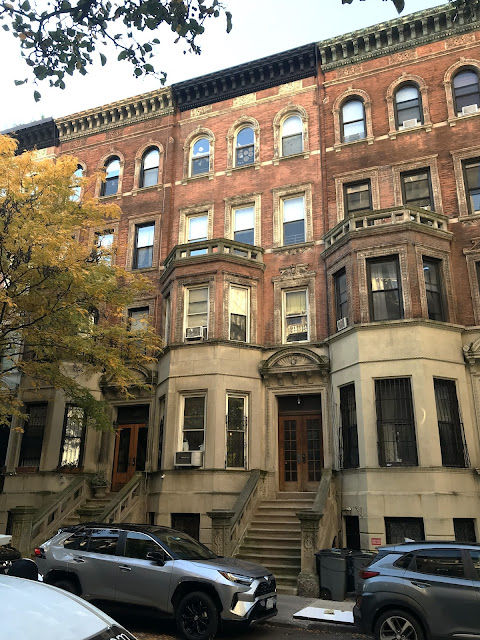 In 1894 developers Wilcox and Hoyt completed five 20-f00t-wide rowhouses on the south side of West 89th Street, between West End Avenue and Riverside Drive.  Designed by Ralph S. Townsend in the Renaissance Revival style, the identical homes rose four stories above high English basements.  The pierced stone stoop railings, anchored by handsomely carved newels, were copied in the stone railings of the third floor balconies.  The basement and parlor levels were faced in limestone, while the upper floor were clad in salmon colored brick.  Townsend lavished the homes with Renaissance elements, like the elaborate carved entrance frames, capped with arched pediments and deeply fashioned shells.  The detailed enframements of the upper floor openings were executed in terra cotta. 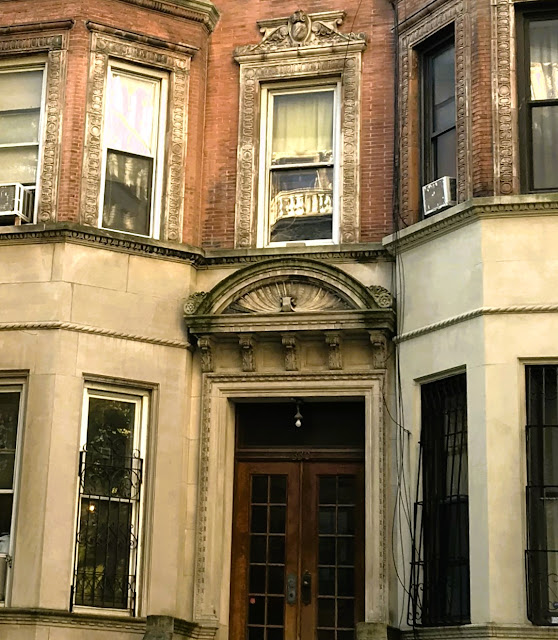 On March 5, 1896, The New York Times reported that Reuben M. Wilcox had sold 330 West 89th Street "to a Mrs. Southack."  Julia W. Southack had paid $40,000 for her new home--or around $1.3 million in 2022.
Born Julia R. Woodruff in 1848, she was the daughter of Marcus P. Woodruff, a New York City cotton merchant who died in 1872 "leaving a great fortune," according to the Democrat and Chronicle.  Julia's husband, Benjamin L. Southack, had died in 1886.  Prior to purchasing 330 West 89th Street, according to The Democrat and Chronicle, "Mrs. Woodruff and her children have spent much of their time in Europe."  Her country home was in Larchmont, New York.
Moving into 330 West 89th Street with Julia were her sons Louis Victor and Harold Cyprian, and daughter, Julia Woodruff.  Louis had graduated from Columbia College three years earlier and was now working in the real estate office of his uncle, Frederick A. Southack.
Julia and her daughter spent their summers in fashionable resorts or in Europe, often in France where Julia's sister Mary E. Loge and her husband lived.  On August 7, 1898, for instance, the New York Herald reported, "Mrs. Julia W. Southack [and] Miss Southack" had arrived at the Mount Pleasant House at Littleton, New Hampshire.
Julia and her daughter spent much of the winter season of 1900-01 in Paris, visiting the Loges.  In February she was "taken ill," as worded by The New York Times.  It was a diplomatic phrasing by the newspaper.  On the voyage home, the younger Julia wired ahead so her brothers would be prepared.  The New York Times reported, "When she returned to this country she was met at the pier by her family physician, who had her taken immediately to Bloomingdale Asylum."  Julia Southack, who was 53 at the time, had undergone a severe mental breakdown.
On November 9, 1901, Julia was "adjudged incompetent" by the courts, and her brother, Randolph B. Woodruff was put in charge of her finances, estimated at about $6 million by today's conversion.  The New York Times explained, "She imagines that she is a young girl fifteen years of age, and is a very violent patient."
Julia died in the Bloomingdale Insane Asylum on October 30, 1903.  A year later, in November, her children advertised the West 89th Street house for rent:

Louis was married by now and was living at 308 West 97th Street.  His mother's disturbing condition and confinement may have contributed to his own mental problems.  The 32-year-old died on June 14, 1905.  In reporting his death, the New-York Tribune noted that while he died of a heart attack, "He had been suffering for a long time from a nervous disorder."
Three weeks later 330 West 89th Street was placed on the market, and was purchased by Leon Hess and his wife, Henrietta.  It was once again the scene of polite gatherings.  On February 24, 1907, The New York Times noted, "Mrs. Leon Hess, 330 West Eighty-ninth Street, will receive Tuesday afternoons, until April."
It appears that following Leon's death around 1909, Henrietta moved permanently to their Summit, New Jersey home, where she died on May 2, 1917.  In the meantime, the West 89th Street house had became home to the John Francis Steeves family. 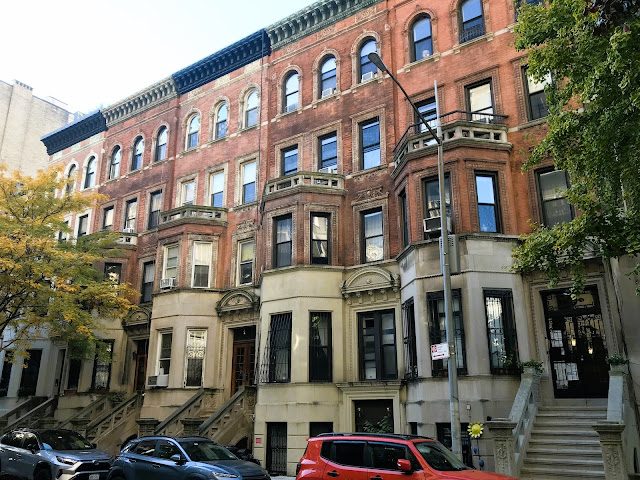 The entrances nestle snugly between the three-sided bays along the row.
In 1908 Steeves had been appointed president of Church E. Gates & Co., a lumber firm with which he had been associated since 1877.  Born in New Brunswick, Canada in 1847, he and his wife, the former Imogene Upson, had four sons--Frederick M., Harrison Ross, John Jr., and Guy Carlton--and a daughter, Miriam.
Both John and Imogene had impressive pedigrees.  The first Steeves arrived in America in the early 18th century, leaving Pennsylvania in 1763 to French-held land in New Brunswick.  Imogene was descended from Captain Samuel Upson, who served in the Revolutionary War.
On April 17, 1910 John's touring car was approaching 129th Street and Park Avenue when it struck six-year-old Gustave Hochseld.  He and his identical twin, Freddie, were headed back to school after lunch.  Steeves and his chauffeur, Fred Katoli, jumped out of the car, bundled the boy inside, and headed to a hospital.  Freddie ran back home and informed his mother.
As a search began, Freddie was sent back to school.  "Soon after he entered his classroom he was surprised so see his twin brother come in with a bandage around his head," reported the New York Herald.   As it turned out, Steeves and Katoli could withstand the boy's crying and protesting only as far as 129th Street and Lenox Avenue, where they allowed him to get out.
After school, the brothers were playing in the street near their home.  In the meantime, still unaware that the two boys were identical twins, Fred Katoli was resolved to have the Gustave's injuries tended to.  He spotted Freddie Hocheld, "jumped to the sidewalk," and "started to drag the boy toward the automobile, but suddenly paused and stared at Gustave."  The New York Herald reported, "The mother hastened to the chauffeur and forced him to liberate the twin, whom he wanted to take to a hospital, whereupon the chauffeur again entered his car and rode off."  The well-intentioned Fred Katoli was later arrested on a charge of felonious assault.
In 1903, about six years before the family had moved into the West 89th Street house, Harrison Ross Steeves graduated from Columbia University.  In 1905 he was made a member of the faculty there, and would remain throughout his career, eventually becoming chairman of the English Department.  An authority on the English novel, he was the author of several books and treatises.  His 1913 Learned Societies and English Literary Scholarship in Great Britain and The United States was dedicated "to John Francis Steeves and Imogene Upson Steeves."
Living with the family by 1917 was John's sister, Louise Peters.  Her sons, William J. and Frederick Steeves Peters, joined the military upon America's entrance into World War I.  Although William's job made him exempt from the draft, he waived the exemption, earning him a place on "the Honor Roll of the National Army" in August 1917.  Tragically, on December 9, 1918, Frederick's name appeared on the list of "Casualties reported by General Pershing."  He had died of disease on the battle front.
The house was sold in 1920, instigating a rapid turnover of owners.  By 1938, when it was purchased by Mrs. P. Aukus, it had been bought and resold no fewer than six times.  On March 7, 1938, The New York Sun reported that she had leased the house for five years, and her tenant had "purchased the furnishings of the house."
By 1995 Judith Henderson lived here, operating the Judith Henderson & Associates casting agency from the house for years.  In 2018 the house was converted to a two-family home, with a triplex in the basement through second floor and a duplex above.
photographs by the author
no permission to reuse the content of this blog has been granted to LaptrinhX.com
Posted by Tom Miller at 1:00 AM