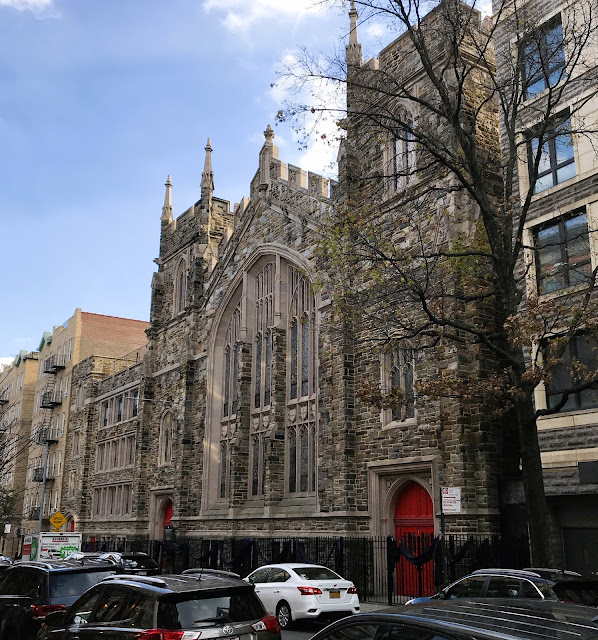 The small group of Black worshippers who defected from the predominantly white First Baptist Church on Gold Street in June 1808 formed their own congregation, taking its name from the ancient name of Ethiopia, Abyssinia.  The Abyssinian Baptist Church would face immense struggles--both financial and social--through most of the 19th century.  In 1834, for instance, the church was attacked by angry mobs in what one newspaper called "blind fury."
Nevertheless, the congregation nevertheless persevered and grew, relocating several times, including to 166 Waverly Place in Greenwich Village, which it left in 1903 to move to West 40th Street.  There would be one more move for the Abyssinian Baptist Church.
At the end of World War I, most of the congregants had moved far northward.  On January 25, 1922 the New York Herald reported that the congregation had sold its Midtown property, explaining, "A year ago six lots on 138th street between Lenox and Seventh avenues were purchased for a new church site.  Work on a new structure will begin soon."
The article called Abyssinian Baptist "one of the oldest negro religious organizations in the city," and noted "The Rev. A. Clayton Powell has been its pastor for fourteen years."  The Abyssinian Baptist Church had come a long way from the original group of less than a dozen.  "The church is said to have a membership of nearly 4,000, the majority of whom reside in the Harlem colored section."
The Philadelphia-based architectural firm of Charles W. Bolton & Son had been commissioned to design the structure, and by April construction contracts were signed.  On April 8, the New-York Tribune projected the costs at $210,000.  The total project, including furnishings, would come to $300,000--or about $4.85 million in 2022.  (Two-thirds of that amount was covered by the sale of the West 40th Street property.)
The cornerstone of the church and community house was laid on June 25, 1922.  The New York Herald reported, "The ceremony was in charge of the colored Masonic Grand Lodge of New York State and many prominent officials and laymen of the order from different parts of the State were present to join with a large assemblage of negroes of this city in making the occasion memorable."  The New York Times added, "The entire block was packed and the housetops and fire escapes were filled with spectators watching the ceremonies." 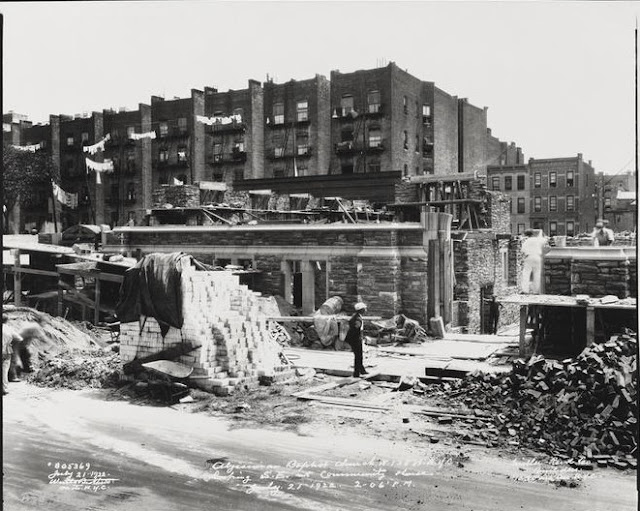 Laundry dries on lines in the rear of tenement buildings behind the construction site in 1922.  photo by Wurts Bros., from the collection of the Museum of the City of New York
In his address, Rev. Adam Clayton Powell Sr. stressed, "These buildings combine the ideas of a church, social welfare center and school, representing the most serious effort ever made by colored people of the North to better their condition along these lines.  The institution is situated in the midst of 175,000 colored people, a larger number than can be found in any other city on earth."
The buildings were completed in 1923.  The church proper was a balanced, English Collegiate Gothic structure of rock-faced Manhattan schist trimmed in white terra cotta.  The crenellated central section, flanked by two square towers, was dominated by a massive stained glass window.  Thin, Gothic pinnacles rose from the corners of each tower. 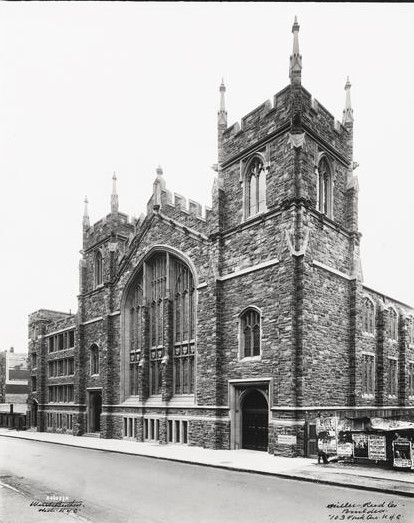 The Community House is to the left.  photo by Wurts Bros., from the collection of the Museum of the City of New York
The New York Herald reported that the "main auditorium will accommodate 2,000 persons."  The community house, said The New York Times, held "a gymnasium, shower baths, reading room, rooms for cooking and sewing, a model apartment and roof garden."
The church's influential pastor, Rev. Adam Clayton Powell, Sr., was born to former slaves in the South in 1865.  He was ordained in 1892 and became pastor of the Abyssinian Baptist Church in 1908.  His focus was as much about the spiritual wellbeing of his flock as it was about their socio-economic condition.  His assistant pastor, starting in 1931, was his son, the Rev. Adam Clayton Powell, Jr., who shared his father's passion for equal social and racial rights. 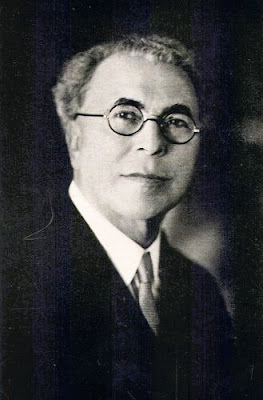 The Rev. Adam Clayton Powell, Sr.  image via Blackpast.org
Rev. Powell stepped down in 1931, turning the pulpit over to his son.  But his work in the community did not cease.  He was a founder of the National Urban League, and vice president of the NAACP.  The New York Times later reported, "When racial conflict in Harlem came to the surface in 1943, Dr. Powell became co-chairman of the City-Wide Citizen's Committee on Harlem...He laid the trouble to pent-up feelings growing out of the treatment of Negro soldiers at home and abroad, crowded conditions in the Negro areas and the lack of employment for Negro youth."  The 1943 Harlem racial upheaval led to his 1945 book, Riots and Ruins, an academic analysis of its causes and suggestions for improving conditions.
Among the earliest examples of activism within the congregation under Rev. Adam Clayton Powell, Jr. followed the death of a young Black man from North Carolina on Welfare Island in September 1933.  The Daily Worker called it a "wanton murder" by prison officials, and said it was "symptomatic of the continuous persecution of Negro workers."  On September 22 throngs of Harlemites crammed 138th Street in front of the Abyssinian Baptist Church to protest the atrocity.  They were joined by white members of the Young Communist League, one of whom was 19-year-old Isadore Dorfman. 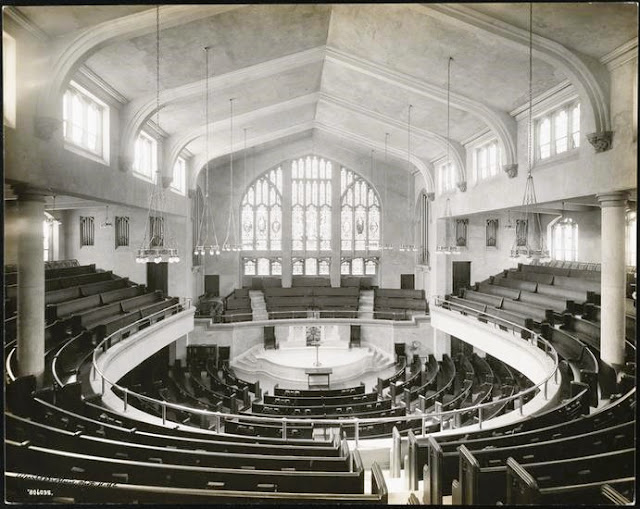 The horseshoe-shaped seating in the auditorium shortly after completion.   photo by Wurts Bros., from the collection of the Museum of the City of New York
When Dorfman witnessed a Black woman being "viciously slugged," as worded by The Daily Worker, by a policeman, he stepped in.  The article reported that Dorfman "was beaten within an inch of his life" and called the actions of the police an "orgy of brutality against the anti-lynching demonstration."  The incident merely fueled Powells' and the congregation's determination to obtain equal rights and treatment.
Rev. Dr. Adam Clayton Powell, Sr., died on June 12, 1953.  His funeral in the Abyssinian Baptist Church was, understandably, the most impressive to date.  The New York Times reported on June 17, "City officials, including Mayor Impellitteri and Police commissioner George P. Monaghan, joined with several thousand parishioners...to pay final tribute yesterday."  During the service, Powell's secretary, Hattie F. Dodson, "read messages of condolence from the White House, members of the President's Cabinet and leaders in Congress." 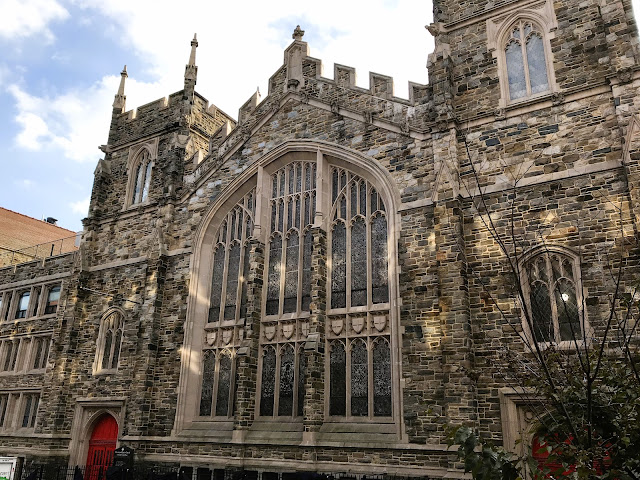 At the time of his father's funeral, Rev. Adam Clayton Powell, Jr. had been a member of Congress for eight years, the first Black man to serve from any Northeastern state.  In 1961 he was appointed chairman of the Education and Labor Committee.  His duties in Washington and legal problems (he was sued for defamation of character) made his visibility at the Abyssinian Baptist Church less than ideal for some congregants.  On August 10, 1964, The New York Times said, "At present [he] is a 'Sunday visitor' to New York City because a summons has been issued (not servable on Sunday) over [a] defamation award he has not paid."  Nevertheless, said the article, "Although his influence is waning, the 55-year-old minister is still a hero to many through his political clubs and his pastorate of the 10,000-member Abyssinian Baptist Church." 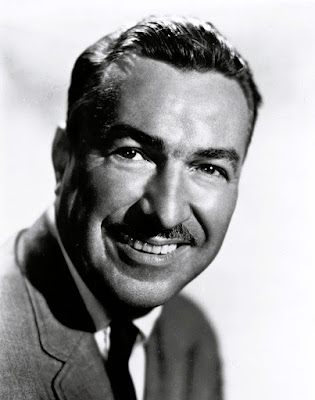 Rev. Adam Clayton Powell, Jr. from the collection of the Library of Congress
Despite his sometimes contentious pastorship, Powell remained a major influence in Harlem, and in the fight for racial justice.  Following his death on April 4, 1972, The New York Times said he "played many roles during a lengthy and controversial public career and he seemed to play each with his own special exuberance."
His funeral was held at the Abyssinian Baptist Church on April 9.  The New York Times reported that more than 2,000 mourners packed the church, "while many thousands more filled the streets outside."  Mayor John Lindsay called him "a man of style, brilliance and compassion--a skilled politician."  But the Rev. Dr. Samuel Proctor perhaps encapsulated him best, saying "He gave us a new basis for hope when our churches, colleges, union, hotels all were segregated.  When my great country, America, screamed at me, telling me I'm a nobody, he gave us all hope."
Three months later Rev. Proctor took the pulpit of the Abyssinian Baptist Church.  He divided his time between his duties here, and his position as professor of theology in the Graduate School of Education at Rutgers University.  His background was as impressive as the Powell's.  During his first sermon, he related that he came from a Southern family "educated by Protestant missionaries who went South in the 1880's to organize Negro colleges."  Among the beneficiaries of that work was his grandmother, "a slave sent to college by her [former] owners.  She graduated from Hampton Institute in 1882."
Rev. Proctor and his assistant pastor, Rev. Calvin Butts, continued and expanded the work of the Powells.  In 1987 the Abyssinian Developer Corporation was formed to improve social services and housing in Central Harlem.  It would build affordable housing complexes and a transitional housing project for formerly-homeless families.
In 1989, Rev. Butts took over the pulpit from Proctor.  Two years earlier, The New York Times had written, "When he was 13 years old, Calvin O. Butts sat in the balcony of the Abyssinian Baptist Church in Harlem and heard the Rev. Adam Clayton Powell, Jr. preach.  Today the 38-year-old is a rising voice in the city who has placed himself squarely in the black clergy's long tradition of social action."  As it turned out, Rev. Butts's influence and charisma would equal the man whom he had so admired as a 13-year-old boy. 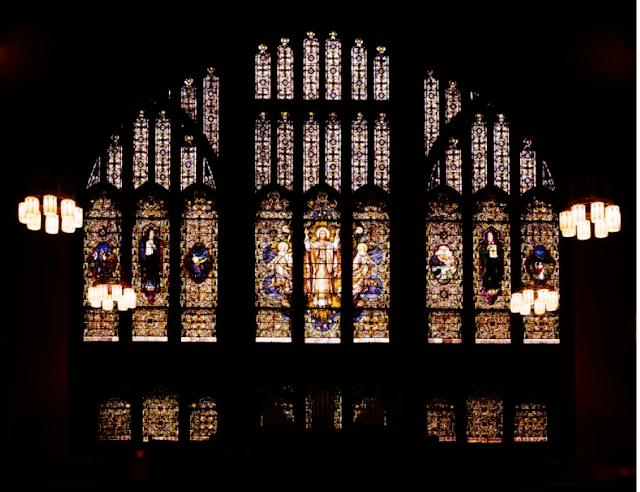 from the collection of the Library of Congress
Importantly, the Abyssinian Baptist Church was not merely about politics and social reform.  It was (and is) a center of Harlem culture.  Some of the most famous Black figures in America have worshipped from its pews, a fact exemplified by the funeral of Count Basie on April 30, 1984.
Basie was one of the pre-eminent band leaders and musicians of the Big Band Era.  The New York Times reported, "Thousands of mourners, the elite and the plain, the musicians who swung with Count Basic and the dancers who swung to him, filled the Abyssinian Baptist Church and overflowed onto West 138th Street.  They still stood there in the early afternoon rain, as if awaiting one final encore, when the pallbearers emerged with Mr. Basie's coffin on their shoulders."  Among the mourners in the church that afternoon were Billy Taylor, Dizzy Gillespie, Cab Calloway, Woody Herman, Sarah Vaughn, Quincy Jones and Benny Carter.
The church would be the setting for an impressive memorial service for the Rev. Calvin O. Butts on October 30, 2022, who had died two days earlier at the age of 73.  He was praised by Mayor Eric Adams as "a real giant in our city" and compared by former Governor David Paterson to Martin Luther King.  "Like the Rev. Dr. Martin Luther King, Jr., Mr. Butts hated complacency," he told The New York Times.  "While some Black leaders would preach that 'Jesus is going to come around and everything's going to be OK, people like Dr. King didn't want to wait around, and neither did Butts." 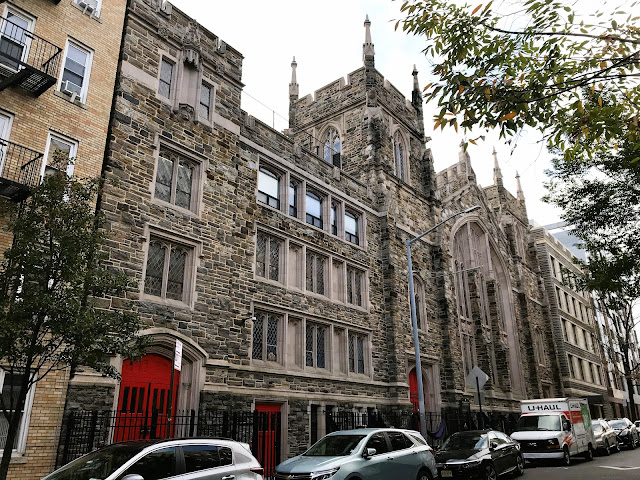 The Abyssinian Baptist Church has been a political and social center of Harlem and New York City in general since its completion in 1923--its architectural beauty surpassed by its civic importance.
photograph by the author
LaptrinhX.com has no authorization to reuse the content of this blog
Posted by Tom Miller at 1:00 AM