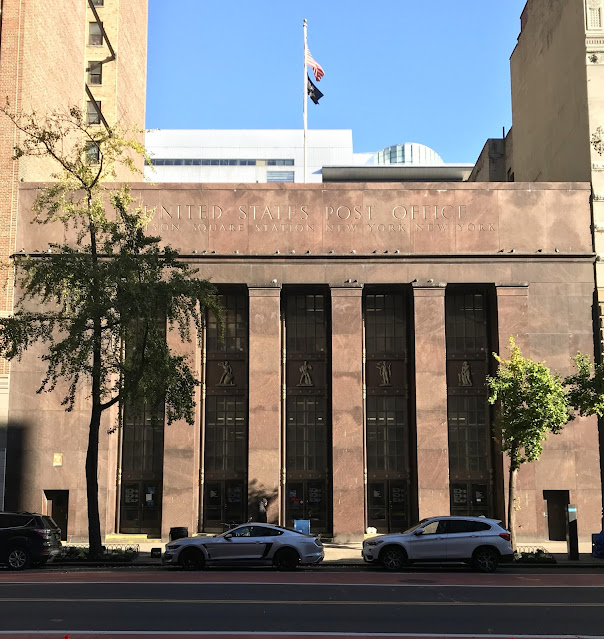 In the first decades of the 20th century, the Madison Square Station post office sat at 122 East 23rd Street, a block and a half east of the park that gave it its name.  The branch's name would become slightly more confusing when plans were laid in 1936 to move it a block further away from the park.
The Government acquired the old, five-story building at 149-153 East 23rd Street as the site of the new post office.  The Supervising Architect of the Treasury, Louis A. Simon, commissioned architect Lorimer Rich to design the structure. 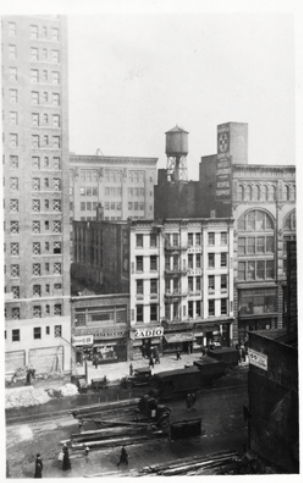 The five-story, Victorian building in the center of this photograph was demolished for the new post office.  from the collection of the New York Public Library.
The total appropriation for the 27,000 square-foot building was $935,000, of which $438,000 would be spent on construction (about $8.5 million in 2022).  The cornerstone laying ceremony took place on October 15, 1936, with Postmaster General James Farley, Postmaster Albert Goldman and United States Representative John J. O'Connor in attendance.
Almost a year later, on September 20, 1937, the Madison Square Station was officially opened.  Rich's Art Moderne take on neo-Classicism echoed governmental architecture appearing in the Washington D.C. and in Germany.  Although the 1939 New York City Guide by the Works Progress Administration called the design "a new classicism free of dependence on the works of antiquity," at least two modern architectural historians disagree.  Norval White and Elliot Willensky in their 2010 AIA Guide to New York City suggest that the building "revives the memory of the mortuary temple of Queen Hatshepsut at Deir el Bahari, Egypt." 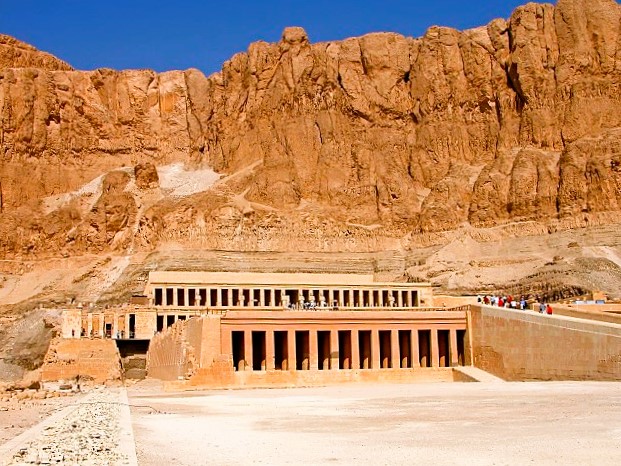 The general architecture of the post office building could possibly be traced back to this building, from Egypt's 18th Dynasty, according to the AIA Guide to New York City.  photo by Dennis Jarvis.
Faced in polished, mahogany-colored granite, the three-story structure is dominated by four double-height pilasters and two matching piers.  The cast iron spandrel panels between the second and third floors were decorated with allegorical gilded bronze reliefs of communication.  The central three were sculpted by Edmond Amateis and the others by Louis Slobodkin.  They depict the messenger god Mercury, signal drums, a letter carrier, a carrier pigeon, and Native American smoke signals. 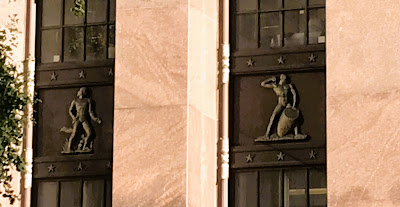 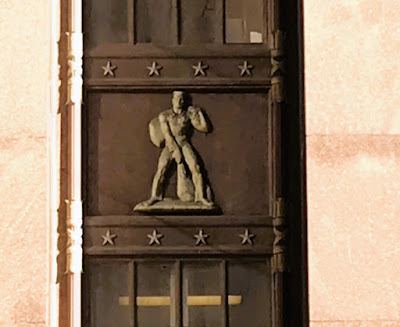 The modern letter carrier (bottom) is honored with the central position among the reliefs.
Pencil Points wrote, "The dark, polished surfaces and strong, simple forms of the Madison Square Post Office are a new note in the city picture of New York, with a large simplicity and a general beauty of proportions which are admirable."  The critic said that the spandrel figures "give life and humanity to the whole," adding, "The use of the figures is important; they are not 'ornament' from a drawing board via a modeler, but the work of a sculptor."  The architect lamented, in retrospect, that he had not given the reliefs more importance.  "And Mr. Rich says that, if he were doing the building today, all the banding and ornament on the spandrels would go, and the sculptured figures be made larger, more important.  The building would thus have gained in power and human appeal," explained the article.
When the building opened, eight interior murals by Kindred McLeary were still in process, and would not be completed until 1939.  The New York Times noted that Rich had called for "the use in the public space of furniture of the type used in banks."  Part of an upper floor was set aside for employees' recreation use. 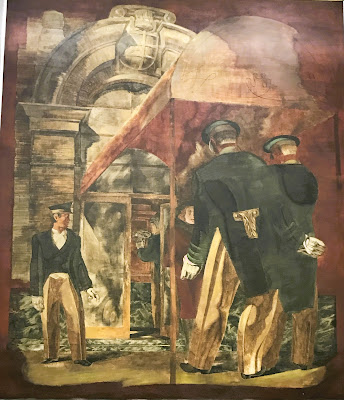 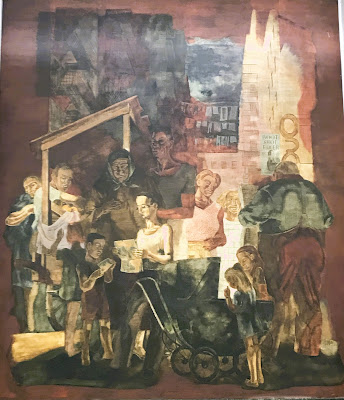 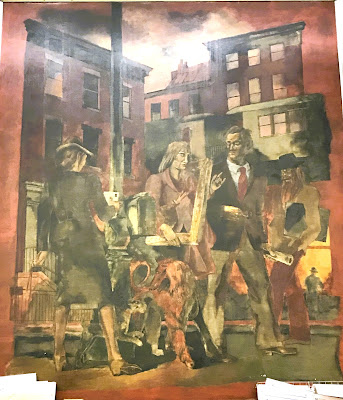 Three of Kindred McLeary's murals.  After 85 years of accumulated grime, the artworks are in need of conservation.
Throughout the coming decades, the post office branch garnered little attention.  That changed in September 1969 when a "regular substitute" employee, 22-year-old Ronald Walker, was caught taking $3.25 from an envelope.  Previously, postal workers found guilty of stealing mail were simply suspended without pay.  The New York Times wrote, "the theory was that the defendant had suffered enough by the loss of his job."
But Ronald Walker's case would set a new precedent.  Federal Judge Edward C. McLean initiated what was called a new "get tough" policy for thieving postal workers.  On January 5, 1970, he sent Walker to prison for six months.
Later that year, postal workers went on strike.  The effects on businesses and regular civilians was reflected by the American Kennel Club, whose mail came from the Madison Square Station.  The organization normally received about 10,000 pieces of incoming mail in the morning, and sent out about the same number in the afternoon.  Now, not only was the staff steeling themselves for the eventual avalanche of mail when the strike was over, but they were running out of space for the back-up outgoing mail.
Another irritation to customers came in January 1976, when postal rates for a first-class letter rose from 10 to 13 cents.  The Madison Square Station was besieged on January 6 with patrons who had left over 10-cent stamps and needed to buy 3-cent stamps.  A reporter from The New York Times noted the "large crowd" at the Madison Square Station, where "a man seeking 3-cent stamps turned away in disgust.  'It's ridiculous, he said, 'And I'll be damned if I'm going to pay them 20 cents.'" 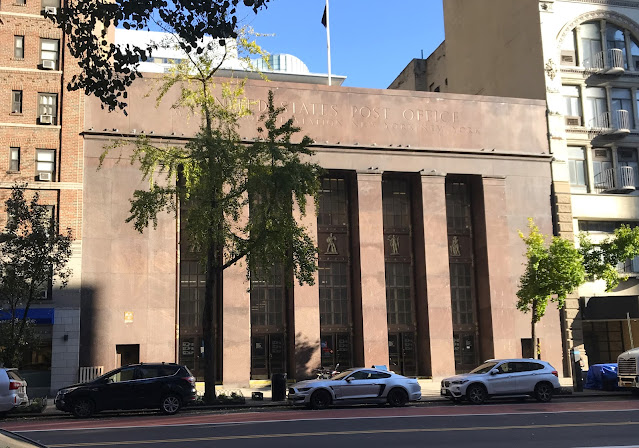 photographs by the author
LaptrinhX.com has no authorization to reuse the content of this blog