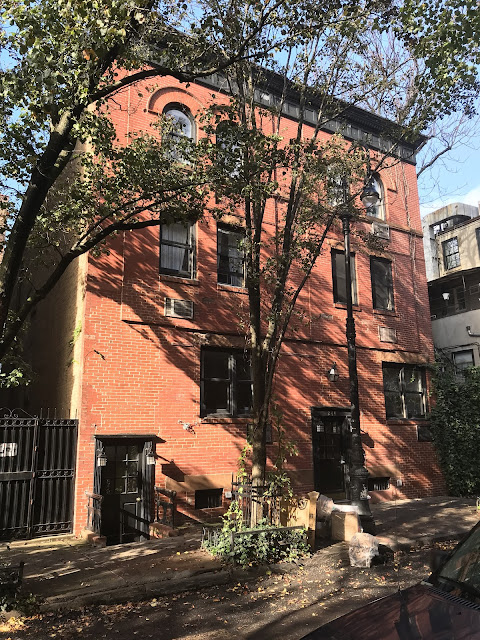 Hester A. Gregory was a significant player in Greenwich Village real estate circles in the second half of the 19th century.  In 1886 she completed two three-story houses at 244 and 246 Waverly Place, between Bank and West 11th Streets, designed by William B. Tuthill.  The 17-foot-wide homes cost Gregory $8,000 each to construct, or about $238,000 in 2022.
The architect simultaneously designed a row of three residences directly across the street at 243 to 247 for John C. Barr.  The two projects formed a harmonious ensemble.  Tuthill blended Romanesque Revival with Queen Anne elements in both, and copied the paired, arched windows of the third floor at 244 and 246 Waverly Place at the second floor of Barr's houses.
While the top floors of 244 and 246 were purely Romanesque Revival, the lower two floors embraced the Queen Anne style.  The entrances of the mirror-image homes sat above short stoops, and were capped by robust pediments filled with cross-hatched millwork.  The paired parlor windows and the openings of the second floor wore small-paned transoms, and terra cotta tiles decorated panels between the second and third floors. 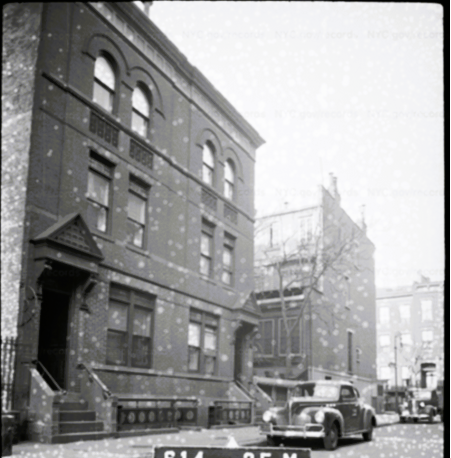 Photographed during a snowfall in 1941, the houses retained their 1886 appearance.  image via the NYC Dept. of Records & Information Services.
As with most of her properties, Hester A. Gregory retained ownership of the houses.  James Frederick Herrick and his wife, Christine Terhune Herrick initially leased 246 Waverly Place.
Herrick was born in 1851 in Madura, India, where his father, Rev. James Herrick was doing missionary work.  Both he and Christine were writers.  In 1866 he moved to New York City as an agent of the New England Associated Press, and joined The World staff the following year.  The New Haven Daily Morning Journal and Courier would say of him, however, "Much of his best work has been done outside of the round of regular newspaper work for the weekly papers and magazines."
Christine came from a literary family.  Her parents, Edward Payson Terhune and Mary Virginia Hawes Terhune were both writers.  Born in 1859, she had written six popular books by the time they moved into 246 Waverly Place.  Her numerous articles on housekeeping appeared in Harper's Bazaar. 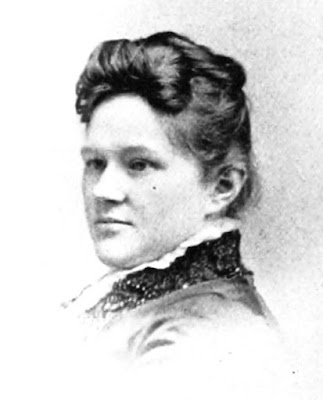 Christine Terhune Herrick, imagine from A Woman of the Century, 1893 (copyright expired)
The Herricks had two sons, Horace and James.  (A daughter had died at the age of three.)  Their country home, The Outlook, was at Pompton Lakes, New Jersey.  During the winter season, Christine held weekly receptions here.  On April 4, 1891, the Brooklyn Daily Eagle noted, "She gathered about her on Wednesday evening, as she has done on other Wednesday evenings during the winter, a pleasant company of her writing and artistic friends."
In December 1892, James Frederick Herrick was stricken with typhoid fever.  Three weeks later, on January 2, he died here at the age of 42.  Christine and the boys moved permanently to The Outlook.
Coincidentally, Hester had recently died.  On March 8, 1893, her estate liquidated 20 properties in what the Record & Guide deemed an "extraordinary sale of houses."  The twin Waverly Place homes were purchased by Timothy J. Kieley and his wife, Annie, for $25,900.  They moved into 246 while renting the other.
Born in County Cork, Ireland, Kieley arrived in New York City at the age of 14.   The Merchant Plumber and Fitter said of him, "He went to sea as an apprentice and rose from a stoker's job to an engineer's before he came ashore for good.  In 1872 he was chief engineer for the Butterick Co., wearing overalls, his hands full of cotton waste."
But things would change for the young immigrant.  In 1878 he invented a return steam trap, which captured condensed steam in heating apparatuses and returned it to the boiler.  In 1880 he partnered with Frederick T. Mueller to form Kiely & Mueller to produce the single product.  It made both of them wealthy.  An astute businessman, like Hester A. Gregory had done, he funneled his profits into New York real estate.
Nine months after James Frederick Herrick's funeral was held in the house, there was another.  Annie Kieley died on September 12 and her funeral took place in the parlor three days later.
Thomas Kieley married Margaret V. O'Connor around the turn of the century.  The couple's summer home was in Arverne, New York.  He transferred title to both houses to her in 1912.
On August 17, 1913, Thomas Kieley died.  In reporting his death, the Merchant Plumber and Fitter commented, "It will be a great surprise to many of our readers to hear that Mr. Kieley, who for the past forty years was known to his intimate friends as 'Plain Tim,' was a millionaire several times over."
Kieley had no children.  The fortune that he had quietly amassed, reported at $2.5 million, caught the attention of relatives, including Annie's niece, Bessie Graham, who had taken the Kieley surname.  She had, however, incurred her uncle's displeasure when she married a man of whom he disapproved.
Family members assembled in the Waverly Place house for the reading of the will.  It did not take long.  The New York Times reported, "His will consisted of only fifty words, and left everything he owned to his wife.  The will made no mention of his nephews, John and Daniel Kieley, or of his niece Josephine Waters."  The Merchant Plumber and Fitter added that Bessie Graham "was at the Kieley home in Greenwich Village on the night when the will that didn't mention her was read."
Not surprisingly, given the size of the estate (around $70.6 million in 2022), the relatives joined forces to overturn the will.  The New York Times reported his "nephews and nieces began suit in the Supreme Court to break the will on the ground that he was mentally incompetent when it was made.  They also charged that undue influence was used by Mrs. Kieley, who was a second wife."  After a two-year battle, Margaret emerged victorious on October 21, 1915.
Despite her massive fortune, Margaret continued to live in the modest Waverly Place house while managing the many properties she inherited.   Her tenants next door, many of them single women, were all well-educated.  In 1909 Bertha B. Corney occupied the house.  That year she co-founded Needleman & Sweetwood, Inc., "printers, stationers, booksellers, etc."
Corney was followed by Sidney Colestock.  A 1909 graduate of  Columbia, she would remain in the house through 1914.  The string of erudite tenants continued with John Burgess, a 1904 graduate of Amherst College, and Louisa Brooke, a 1907 alumna of Vassar.  From 1918 through 1921, A. I. du P. Coleman, a faculty member of New York City College lived in 244 Waverly Place.
In the meantime, Annie Haggerty, Margaret's sister, and her husband, Jeremiah, moved into 246.  Born in 1862, Haggerty was a vice president in Kieley & Mueller.  It is unclear if he held that position while Timothy Kieley was alive, or if Margaret hired him.
Annie Haggerty died in the house on August 24, 1923.  Her funeral was held here on August 28, followed by a mass at St. Joseph's Church on Sixth Avenue.
Two years later, Jeremiah initiated a large family trip to the Vatican for Holy Week.  The New York Evening Post said he was "accompanied by several of his nieces and his sister-in-law, Mrs. Margaret Kieley."  On April 15, 1925, shortly after returning to the Waverly Place house, Jeremiah Haggerty died at the age of 63. 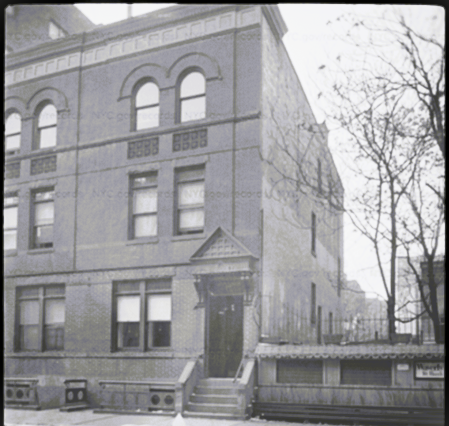 image via the NYC Dept of Records & Information Services.
Margaret Kieley remained, now alone again, in 246 Waverly Place and the Averne residence.  She died here on November 24, 1930.  Hers would be the last funeral in the house.
Margaret had converted 244 Waverly Place to apartments in 1926.  A renovation to 246 completed in 1931 also resulted in a multi-family building.
Throughout the 1930's, the occupants of 244 Waverly Place, many of them members of the Communist Party, were closely scrutinized by the Government.  They included Barbara Moneton, simply on the Government's radar because she registered as a Communist and annually voted for the party, and Vera Taft.  In the Congressional hearings on the Scope of Soviet Activity in the United States, the 23-year-old Taft's trip to Russia and Finland in 1938, was brought up.  Especially concerning to the United States House Special Committee on Un-American Activities was Kenneth Hunter, aka Arthur Herzog, Jr.  The committee offered letters written in 1938 from the Waverly Place address as evidence.  In one, Hunter asked a Boston colleague to help recruit two students he had met there.  The letter began:

Dear Comrade Frankfeld:
I have just come from New York district office where I have obtained your name and address from Comrade Wells (in charge of personnel).  The situation which I should like you or Comrade Blake to work on should hardly be distasteful.

The names of the residents of 246 appeared in print for purely academic reasons.  Two New York University faculty members lived here throughout the 1930's, Eleanor Boykin and Donald W. McConnell.  McConnell was assistant professor of economics.  He joined the staff in February 1928, and wrote several books on economics, including Economic Behaviour.  The bachelor underwent an operation on January 24, 1941, and died in New York Hospital at the age of 39 on February 4. 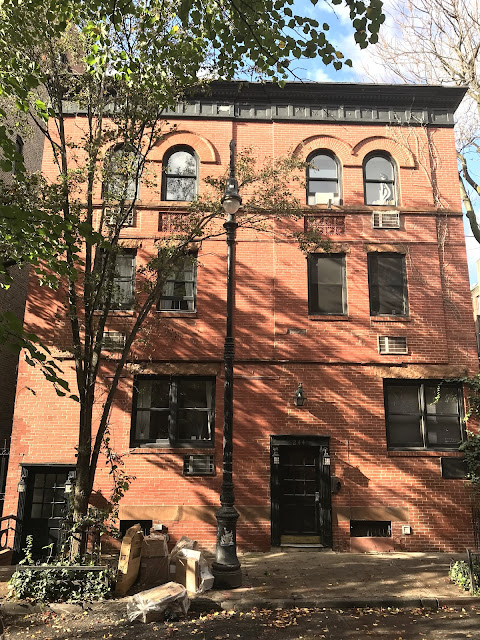 In 1961 the two houses were combined internally.  It was a this time that William B. Tuthill's creative design was brutalized.  The Queen Anne windows were removed and each of the houses lost a terra cotta panel to accommodate air conditioning units. 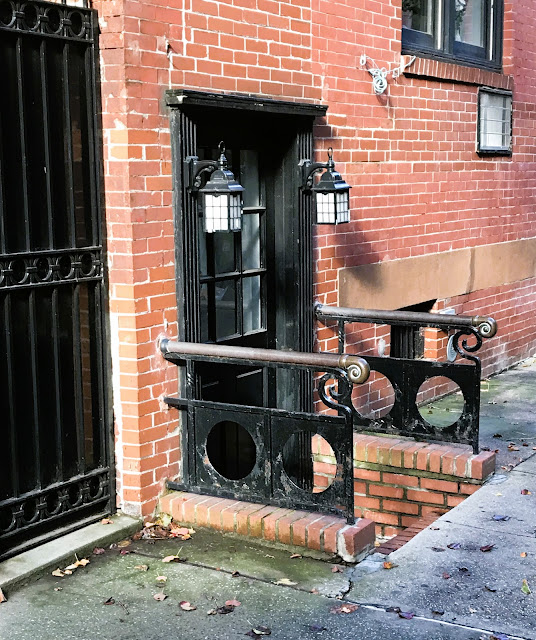 Two sections of the quirky 1886 areaway railings were repurposed for the new entrance to 244.
Both doorways were altered--their unique frames and hoods destroyed.  The entrance to 244 now sits awkwardly below sidewalk level, and that of 246 was moved to the opposite side.  Little hint of their original, picturesque appearance remains.
photographs by the author
no permission to reuse the content of this blog has been granted to LaptrinhX.com
Posted by Tom Miller at 1:00 AM