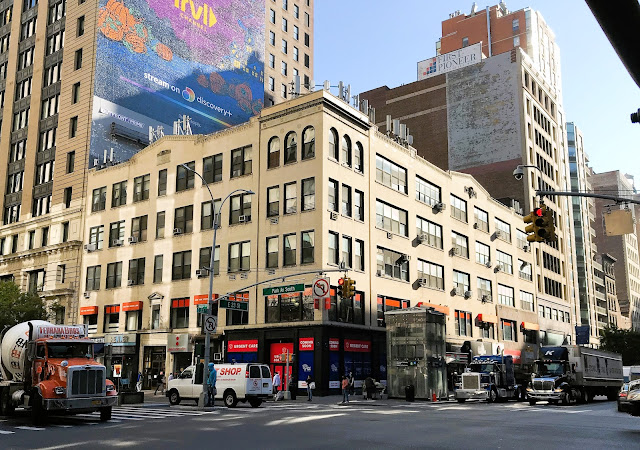 In 1921 the newly formed 303 Fourth Avenue Corp. demolished the vintage buildings at 303 through 311 Fourth Avenue (renamed Park Avenue South in 1959), and 107 to 113 East 23rd Street.  The syndicate then hired the architectural firm of Gronenberg & Leuchtag to design a replacement store and showroom structure on the site.  The plans, filed in September, placed the construction costs at $110,000, or more than $1.6 million in 2022.
Groenberg & Leuchtag drew heavily on the waning Arts & Crafts style, the firm's spartan design featuring a triangular parapet on each elevation.  Incised, vertical lines set the corner section apart, its arcaded openings at the fourth floor creating the illusion of a tower.  Polychrome Arts & Crafts style tiles decorated the frieze below the corner cornice, while terra cotta tiles lined the roofline elsewhere.  The architects made an exception to the no-frills design with the avenue entrance.  Here the doorway was capped with a carved, Renaissance inspire entablature.  Flanking the window atop its cornice were two base relief sirens. 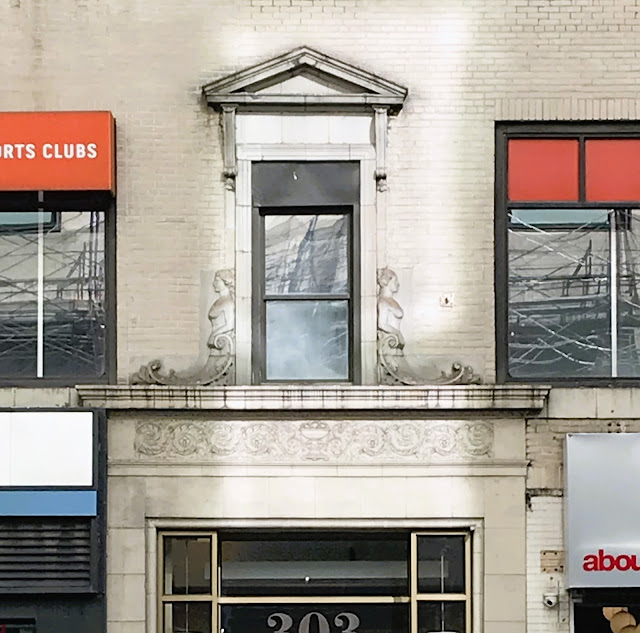 As the building rose, advertisements touted it as "suitable for haberdashery, shoes, hats and other wholesale & retail business."  The publicity worked.  On June 1, 1922, the New York Herald reported that the stationery firm Karnell & Meissner, Inc. had signed a 10-year lease "from plans."  And two days later, the Real Estate Record & Guide reported that the Tomados Confectionery Co., Inc. had taken space "in the building in course of construction."  That lease, too, was for 10 years.  Before the end of the year the Standex Optical Company took space, and the Times Square Auto Supply Co. leased the ground floor.
The H. P. Carr & Co. operated from the building in the 1930's.  In 1937 it received a patent for its Tutticurio tooth powder.  An advertisement promised it would "clean teeth with 100% safety.  Contains no soap or grit."  A "family size container" was available by mail for 25 cents. 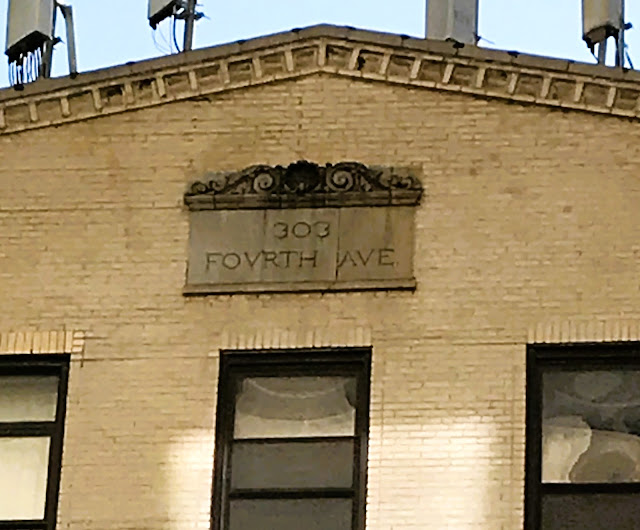 The old address is announced in a plaque on the Park Avenue South facade.
The wide variety of tenants sometimes created strange bedfellows.  In the 1940's, 303 Fourth Avenue was home to the Garland Beauty School, which taught "beauty culture" as well as barbering.  Also in the building was the Socialist Party National Headquarters, which held meetings and published booklets and the weekly Socialist Party newspaper, The Call.   The headquarters would remain well into the 1950's. 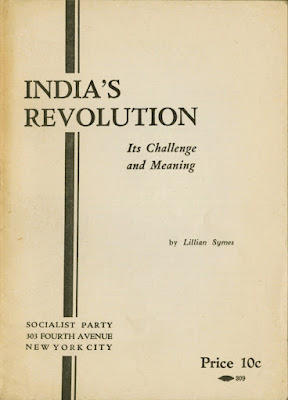 This 1946 booklet gives the Socialist Party Headquarters address.
Also in the building at the time were the novelty, mail order firms Jerry Gottlieb, Inc., and Madison Mills, which touted its "Glow-In-The-Dark" specialties like "house numbers, pictures, plastic novelties, religious and nursery objects."
Beginning at mid-century, several design-related firms moved into the building.  By 1958 the Artists Design & Process Corporation was here, as well as the architectural and engineering firm of Greenberg & Ames.  By 1969 the related Ames Associates, architects and engineers, was listed here as well.  Humanities Press, Inc. occupied space from the mid-1960's to the 1980's. 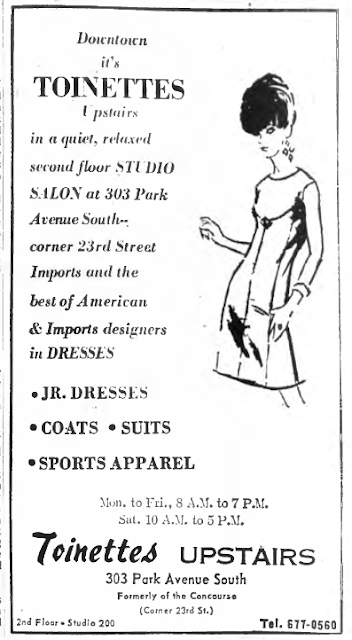 The women's apparel shop, Toinettes, was in 303 Park Avenue South in the 1960's.  The Riverdale Press, September 8, 1968.
An unexpected tenant came in 1981.  On February 20, The New York Times reported, "The Cumeezi Clowns are at it again.  They will open their winter series of free entertainment at public sites this afternoon."  The article added, "If you're clown inclined, they teach--$40 for four classes--at 303 Park Avenue South."
The clown school was a hint at the changing personality of the district.  In 1989 Scuba Network was offering certification classes at its shop here.  Five years earlier, the art gallery 303 Gallery was founded in the building.  It would be a destination for art patrons for nearly three decades, not leaving until 2013.
Real change came in 1990's.  In 1997 sprawling residential loft spaces were being rented.  One potential renter described a 2,500-square-foot apartment to The New York Times journalist Barbara Whitaker in November that year as having "hardwood floors, an exposed brick wall and three pyramid-shaped skylights set into the 12-foot-high pressed tin ceiling."
A comprehensive renovation completed in 2004 resulted in a "physical culture establishment" on the first and second floors, and "apartments, offices, and artist studios" in the upper floors. 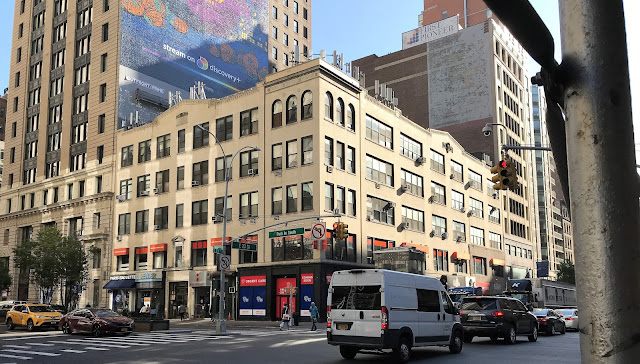 Other than the mutilated ground floor, Gronenberg & Leuchtag's 1922 building--which always looked more factory than showroom--is nearly unchanged after a century of disparate use.
photographs by the author
no permission to reuse the content of this blog has been granted to LaptrinhX.com
Posted by Tom Miller at 1:00 AM