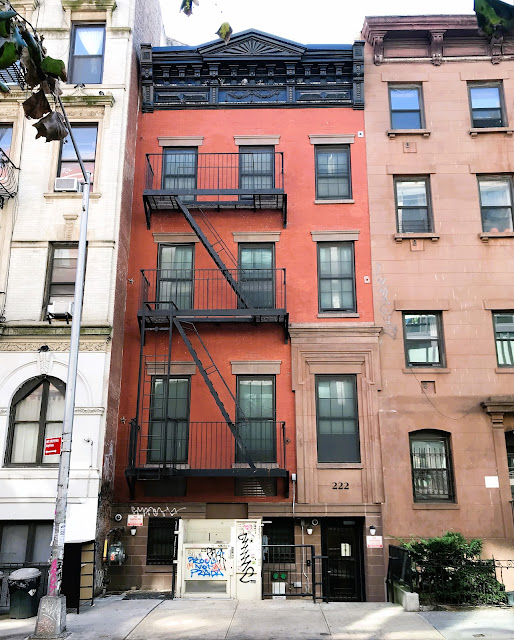 The elaborate pressed metal cornice was part of an 1888 updating.
Born in Durham, New York on June 1, 1817, Edwin Ruthven Tremain was married to Mary Briggs in 1838, two years after he went into the leather manufacturing business in Tannersville, New York.  The couple would have three children, Henry Edwin, Walter R. and Augusta.
The Tremain family relocated to New York City around 1840 and by the early 1850's Edwin had moved from the leather business to banking, now a partner in the firm Tremain, Tyler & Patterson.  Around 1855 the moved his family into the new 22-foot-wide residence at 130 East 13th Street (renumbered 222 in 1867).
Face in red brick, the Tremain house was three stories tall above a brownstone-fronted English basement.  A tall stone stoop rose to the elaborate entrance.  Greek Revival doorways often sat within earred stone frames that upheld an entablature and cornice.  The "ears" were a popular design in domestic Greek Revival architecture, although their origins were, in fact, Egyptian.  The ears of the Tremain house were especially long, and the architect forewent the expected entablature in favor of an understated molded cornice.  A cast iron balcony almost assuredly fronted the floor-to-ceiling height parlor windows, originally.  As with nearly all Greek Revival homes, the third, or attic, floor was substantially shorter, with squat windows below a plain, bracketed cornice.
When the first shot was fired in the Civil War, Henry Tremain had just entered Columbia College, having graduated from the College of the City of New York in 1860.  He was 21 years old and his brother, Walter, was 18.  No doubt much to Mary's trepidation, both her sons dropped everything to fight for the Union Army.  Henry joined the 7th New York Militia and Walter enlisted in the 73rd New York Infantry Volunteers.
Walter's service would be short.  While on duty in Suffolk, Virginia, he contracted typhoid fever.  On August 20, 1861, only four months after the war began, he was discharged and sent home.  He died at the age of 19 in the East 13th Street house of "typhoid pneumonia," as reported in The New York Times, on Christmas Day, 1862.
Henry Edwin Tremain had a brilliant military career throughout the war.  Having been cited for gallantry at the battles of Williamsburg and Malvern Hill, he was taken  prisoner while leading a counter attack at the second battle of Bull Run and was held in the notorious Libby Prison for a short time.  At the Battle of Resaca in May 1864, he earned the Medal of Honor for "extraordinary heroism."  The citation read in part, "Major Tremain voluntarily rode between the lines while two brigades of Union troops were firing into each other and stopped the firing." 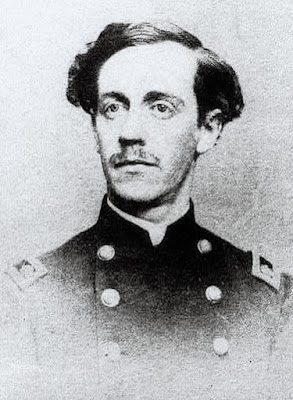 Brigadier-General Henry E. Tremain, from the collection of the World Biographical Encyclopedia.
Henry Edwin Tremain was brevetted lieutenant-colonel on March 13, 1865, "for gallant and meritorious service" and in November 1865, was given the rank of brigadier-general.   Upon his discharge in 1866, he returned to the East 13th Street house, and resumed his law studies at Columbia.
Like many well-to-do families, the Tremains had taken in selected boarders during the war.  An advertisement in the New York Herald on October 2, 1861 read:

A private family would accommodate a gentleman and wife, or two gentlemen, with handsomely furnished Rooms and Board.  House replete with every convenience for comfort.  To desirable parties terms quite moderate.  Location fine.

Somewhat surprisingly, sharing the rooms in 1861 were Henry and Leon Clinton.   The brothers were listed as "actors," and few upscale families would have welcomes theatrical types into their homes in the mid-19th century.
The post-Civil War years were happier in the Tremain household.  On October 25, 1865, Augusta Tremain married Stephen Rowe Bradley in the Church of the Holy Trinity, and the following year Henry began his law career.  He would co-found the New York Law Journal in 1872, and become first assistant United States attorney in 1873.
The Tremain family left 222 East 13th Street around 1868.  It was purchased by former State Senator Henry R. Low, who had resumed his private law practice in 1867.  It is quite possible that Low knew the Tremains through Henry.  He did not move into the house, choosing instead to lease it.
Long term tenants were August H. Goepel and his family, who moved in around 1876.  He and his son, Carl, were musicians.  August also held the position of treasurer of the Musical Mutual Protection Union.  As the Tremains had done, the Goepels took in a few boarders.  Living with them in 1876 were Dr. James A. Bennett and Ernest Neyer, another musician.
The Goepel's boarders were on the whole respectable.  An exception was Mary Dusen.  In 1879 she, along with Dr. Morris Eisler, boarded with the the family.  Mary was most likely asked to leave after a shocking article appeared in The New York Times on July 12 that year.
Mary was drunk two nights earlier.  The article said that Officer Leddy had arrested  her "in First Street, where she was creating a great disturbance and attracting a large crowd."  After spending the night in jail, she appeared before Justice Bixby in the Essex Market Police Court.  "She was as meek as a lamb until the magistrate sent her to the Island for six months; then she set up a terrible shrieking, and kicked and struggled wildly," said the article.  It took five officers to overpower her.  The article said that as she was removed from the courtroom, she yelled at the judge, "If I only had two glasses more of whisky ye'd niver have taken me in."
Dr. Morris Eisler was still boarding with the Goepels in 1882.  At 3:00 on the morning of December 30, Eisler awoke to find he was not alone.  The New York Times explained that he "discovered Thomas Gallagher, a cook on the steamer Tallahassee, groping about his room.  Eisler got up and Gallagher knocked him down."  The intruder did not get far, and in the Essex Market Police Court he told the judge "he had been to a ball and lost his way home, and could not account for his present in the house."  Judge Patterson found the alibi unbelievable and held Gallagher for trial.
The Goepels leased the house through 1886.  Dentist Samuel Simon had rented a room from them since at least 1882.  In 1887 he took over the lease on the house and installed his office here.  An announcement in the New York Herald on May 8, 1887 read, "Dr. S. Simon, Dentist, has removed from 113 Varick st. to 222 East 13th st., between 2d and 3d avs."
In April 1888, Simon had hired the architectural firm of Kurtzer & Rohl to remodel the house.  The plans included "walls built up and building raised."  The attic level was increased to full height and an elaborate pressed metal cornice, perhaps more expected in a commercial building, was installed.   Following the renovations, Simon moved his elderly parents, Julius and Amelia into the house.
Later that year, on December 1, 1888, Henry R. Low died.  He left the East 13th Street house to his daughter, Mrs. J. C. Anderson, who sold it to Simon.
On August 27, 1896 Julius Simon died here.  His funeral was held in the drawing room on August 30.  It was followed a year and a half later by Amelia's funeral.  She died "after a brief illness," as reported by the New York Press, on May 22, 1898.
Dr. Samuel Simon retained ownership of the house until May 1907, after which he moved to Lexington Avenue.  The new owner leased rooms, and in March 1908 advertised "Parlor floor, furnished or unfurnished; excellent location for doctor; has been occupied by doctor for 22 years."
As the neighborhood gradually declined in the post World War I years, so did the the respectability of tenants.  In 1920, the Government's gunpowder plant near Nashville, Tennessee known as "Old Hickory" was robbed of $250,000 worth of platinum--a haul equal to more than three-and-a-quarter million dollars in 2022.  When platinum began showing up in New York City, the Department of Justice partnered with the New York City Police Department to launch an investigation.  On March 29, 1922, The New York Times reported that the four perpetrators had been captured, including Emma Weller, who lived in a room at 222 East 13th Street. 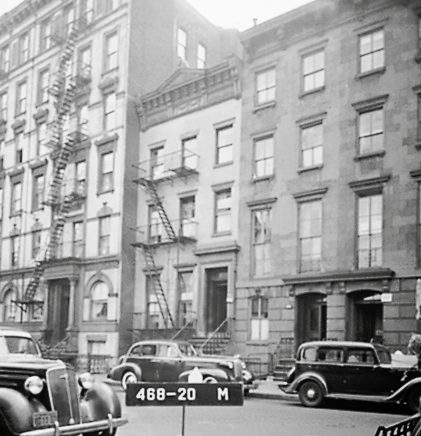 In 1941 the full-length parlor windows, the stoop and transom above the entrance were intact.  image via the NYC Dept. of Records & Information Services.
In 1963 Albanian immigrant Hondo T. Barimm roomed here.  A "savage feud," as worded by the Long Island Star-Journal,  between him and Qani Saraci had begun as a quarrel years in their homeland.  Their intense hatred boiled over when Barrimm left 222 East 13th Street at 2:30 on the afternoon of July 24, 1963 and saw Saraci.  Police later said that "Barimm drew his automatic and Saraci fled."  The terrified Saraci ran to the firehouse one block west at 108 East 13th Street.  The Long Island Star-Journal reported, "Barimm fired a shot which mortally wounded Saraci as it ripped into his left eye."  Barrimm was charged with homicide in what the newspapers called the "Vendetta Death."
Another tenant on the wrong side of the law was Victor Solano.  Early on Thanksgiving morning, 1973, the 53-year-old  Solano and a 19-year-old accomplice, Roman Senue, dropped into the Howard Clothes Store in Ridgewood, New York through a skylight.  Before they could escape, they were arrested and charged with burglary, possession of a weapon and possession of burglar's tools.
By the 1980's, 222 East 13th Street was deemed by the City Journal as "a notorious crackhouse."  Reportedly, neighbors who filed complaints were assaulted by the occupants.  In the spring of 1989 the house suffered what the Department of Buildings documented as a "firebombing."  It resulted in damages to the parlor floor hallways and "possibly first floor beams."  The city took possession, and the once-elegant home was boarded up and abandoned.  It remained vacant for approximately two decades, raising speculation of its being haunted.  (If it were haunted by anyone, it was drug users and squatters, rather than spirits.)
Then, in October 2011, the Land Use Committee of Community Board 3 approved a proposal "to turn a vacant city owned building at 222 E. 13th St. into housing for 12 [to] 18 homeless LGBT youth."  The city partnered with the Ali Forney Center for the project.  The center ran three shelters for homeless gay young people at the time, but that fell short of the need.  On November 6, 2011 The New York Times reported, "The Forney Center has almost 200 names on its waiting list to get housing."
Four years later, on July 21, 2015, Reid Wilson, writing for New York YIMBY, reported, "At 222 East 13th Street, in the East Village, a dilapidated and vacant four-story townhouse has begun its conversion into [the] Bea Arthur Residence, a[n] 18-bed supportive housing facility for homeless LGBT youth."
Upon her death in April 2009, actress Bea Arthur had left $300,000 to the Ali Forney Center.  The windfall went towards the transformation of 222 East 13th Street.  The renovation, by Magnusson Architecture & Planning, was completed in late 2017.  The dedication was celebrated not with a ribbon-cutting, but with a cheesecake cutting ceremony. While the stoop has been lost and the renovations of the basement level fell short of the original plans, the Tremain house has happily been brought back from the brink of eradication.  And the unusual entranceway, today serving as a window, survives.
photographs by the author
LaptrinhX.com has no authorization to reuse the content of this blog
Posted by Tom Miller at 1:00 AM