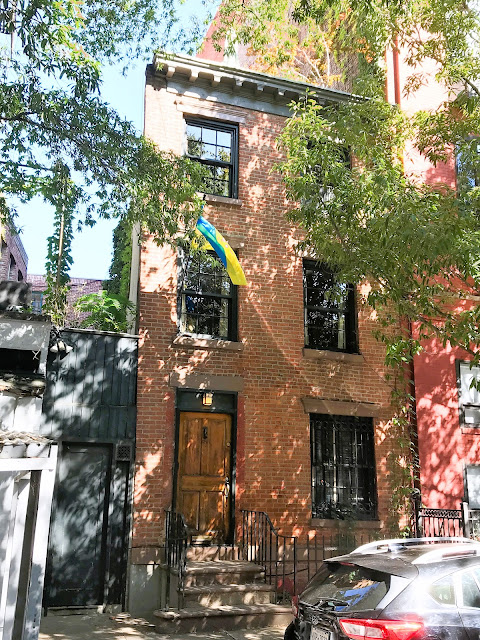 The wooden door to the left of the house opened onto a "horsewalk" that accessed the rear yard.
Although Charles C. Crane made his main living in the flour business, he occasionally invested in a speculative building.  In 1855 he erected a narrow, three-story house at 119 Bank Street (renumbered 129 in 1866).  Just two bays wide, it was clad in red brick above the brownstone basement level.  Delicate iron railings graced the short stoop that led to the single-doored entrance.  The understated Greek Revival elements--simple stone sills and lintels, and the plain fascia board below the cornice with its block-like brackets--added to the charm of the dwelling.

Its first resident was John Patterson, who was a "laddie," or volunteer firefighter in Engine Company No. 3.  It is unclear how long Patterson remained in the house, because for more than a decade, each time the representative from the city directories knocked on the door of the Bank Street house, he walked away noting "name refused."
In 1867 the building in the rear yard was used as the offices of Costigan & Steele.  Edward Costigan, who listed his profession as "carpenter," lived at 778 Greenwich Street.  His partner, Adam Steele, was a builder, living at 14 Abingdon Square.

Trow's New York City Directory, 1868-69 (copyright expired)
Costigan & Steele moved elsewhere in 1869.  That year the house was available to rent.  An advertisement in the New York Herald listed the rent at $800 a year, or about $1,640 per month in 2022 terms.
Harriet Onions ran 129 Bank Street as a boarding house.  Among her boarders in 1872 was 30-year-old John H. Horsfall.  Born in Buffalo, New York, he had joined the Union Army on October 15, 1863.  He was brevetted a captain on July 20, 1865 "for gallant and meritorious conduct at the storming of Ft. Fischer, N.C," according to the Revised Register of the Soldiers and Sailors of New Hampshire in the War of the Rebellion.
Now, in peacetime, Horsfall worked as a clerk--a nebulous term that covered jobs ranging from low-paid clerics to highly responsible positions within banks and hotels.  He nevertheless remained active in the National Guard, achieving the rank of major by the 1870's.
Although directories clearly listed the address as a boarding house, when Harriet Onions placed an advertisement in the New York Herald on May 11, 1873, she claimed it was a private home: "2 nicely furnished rooms with board, in private family.  Best of references given and required.  Terms moderate."
Over the years the little house saw a variety of residents.  Dentist George J. Eggleston lived here in the late 1878's, while his office was on East 21st Street.  For several years in the late 1890's Bridget Mulholland, the widow of a police officer, lived in the house.  She received $10.07 per year from the police department as her husband's pension--a modest $340 by 2022 conversions. 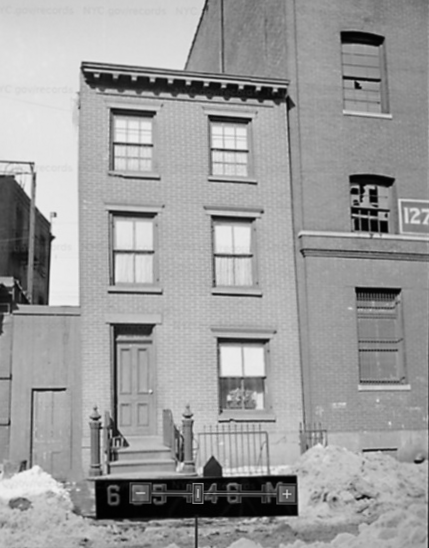 In 1941 hefty cast iron stoop newels, added in the second half of the 19th century, survived.  image via the NYC Dept of Records & Information Services.
The survival of the narrow brick house may have been due to its being bundled for years with the building on the corner of Washington Street.  The parcel was sold by the estate of Sarah A. Morgan in May, 1910, resold in November 1919, and again in December 1945. 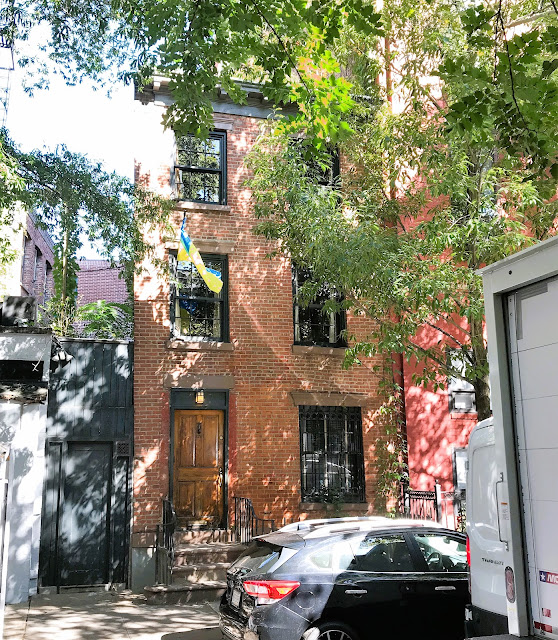 There are two apartments in the venerable house today.  The exterior remains nearly unchanged after more than 165 years.
photographs by the author
no permission to reuse the content of this blog has been granted to LaptrinhX.com
Posted by Tom Miller at 1:00 AM