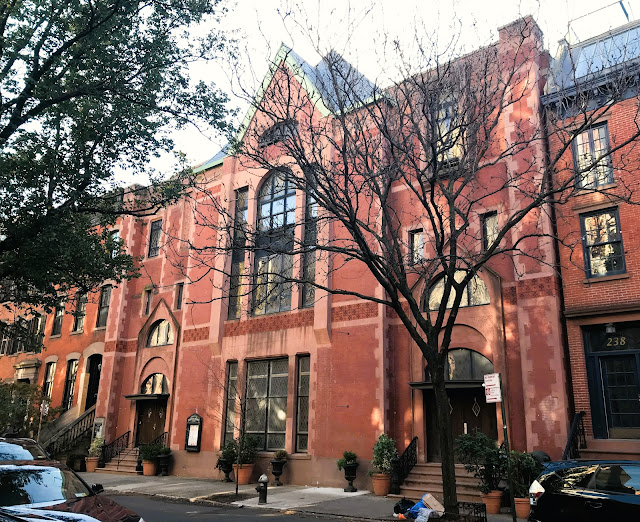 On July 9, 1826, a dozen worshipers formed the North Baptist Church.  The New York Times later explained the congregation was "so named because it was once the most northerly church of that denomination in New York City."  The group originally met in a school house on Amos Street (later West 10th Street), and then "the old Greenwich-Village Watch-house," according to King's Handbook of New York decades later.  Finally, a permanent home on Christopher Street at Bedford Street was completed in 1828.
The area around Greenwich Village was still surrounded by summer estates.  One of them was just three blocks north of the new church.  It was established in the late 18th century  by Garrett Gilbert, "a well known personage," according to historian William Leete Stone in 1872.  His mansion sat approximately at the corner of today's West 4th and West 10th Streets.  Stone said, "The grounds around it, consisting of several acres, were laid out regardless of expense."  The estate was later sold to Senator Marcus Spencer, whose family remained in the house until 1860.  It was demolished in 1872.
By then Greenwich Village had engulfed the former estate.  Houses had quickly risen on the streets that had been laid out years earlier.  On March 31, 1880, the North Baptist Church purchased three brick-faced houses at 232 through 236 West 11th Street as the site of a new building.  They paid Chester H. Simmons $20,500 for two of them, and $7,406 to Elias A. Day for the other.  The total outlay for the properties would equal about $763,000 in 2022.
On December 15, 1880, The New York Times reported on a  weeklong fund-raising bazaar and fair.  "This effort is made to swell the fund for the erection of a new church building," said the article.  It explained the lots had been purchased "in West Eleventh-street, near Waverley-place, only a few blocks from the present site, but in a much more desirable neighborhood."  The article added, "The old North Church is a familiar landmark in the Ninth Ward, having stood there since that district was known as Greenwich Village."
The congregation hired architect Laurence B. Valk to design their new building.  Rather than the more expected Gothic Revival, he chose the Queen Anne style.  While highly popular for commercial and domestic buildings, it was a risky choice for an ecclesiastical structure.  In reporting on the cornerstone laying, which took place on September 28, 1881, The Christian Union wrote, "The new church will have a brick front of 75 feet, a depth of 90 feet, with a tower, and a seating capacity for 1,000 persons."  The article added, "it is expected to be ready for occupancy January 1."
That projected completion date proved slightly optimistic.  The consecration ceremonies were conducted on June 25, 1882.  Services were held, according to The New York Times, "in the morning, afternoon, and evening."  The article said, "The total cost of the new church is $77,239.50."  That figure would translate to just over $2 million in 2022.  "All of this money with the exception of $30,000 has been paid."
Valk's asymmetric design included two entrances above short stone stoops.  Above their arched, stained glass transoms were tympani of colorful tiles, and above those were a second set of arched stained glass windows within a pointed enframement.  The entrances flanked a slightly projecting section which held a three-part stained glass window on the first floor, and a double-height window directly above.  A frieze of Queen Anne style terra cotta tiles ran between the first and second floors.   Valk's design exploded at the roofline, where pyramidal caps, a prominent gable, and a bell tower created a delightful chaos of shapes. 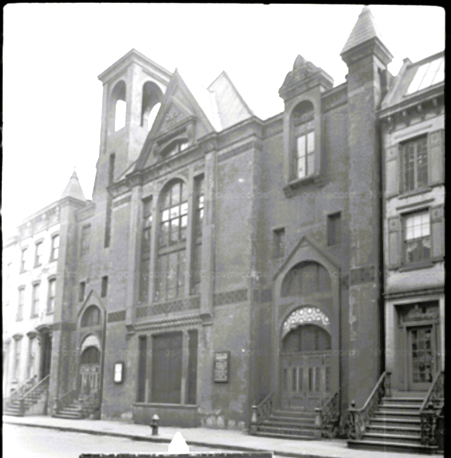 via the NYC Department of Records & Information Services.
Rev. John J. Brouner had been pastor of the church since 1869.  He was the son of Rev. Jacob H. Brouner, the congregation's first pastor, who had served for 20 years until his death in 1848.  After more than a quarter of a century in the pulpit, John Brouner preached his last sermon on February 3, 1895, to accept the position of corresponding secretary of the New York City Baptist Mission Society.  He was replaced by Rev. G. M. Schott.
In 1897 the North Baptist Church merged with the Macdougal Street Baptist Church, which was founded in 1809.  The blended congregations worshiped together for the first time on April 18, with The New York Times reporting, "The audience was sufficient to crowd the edifice."  The consolidated church took the name of the North Baptist Church of New York City.  Rev. Schott remained as the pastor, while Rev. Brunner of the Macdougal Street Baptist Church, moved on to the Baptist City Mission.
Things did not go smoothly for Rev. Schott.  Two years later, on February 26, 1899, he preached his last sermon before leaving North Baptist Church.  He did not go quietly, however.  The New York Times said, "After frankly admitting that his efforts in behalf of the church had not been a success, he launched forth in a severe arraignment of his congregation and criticised [sic] them pointedly for the way in which he had been treated, appealing to them, for their own sake, to be more considerate with his successor." 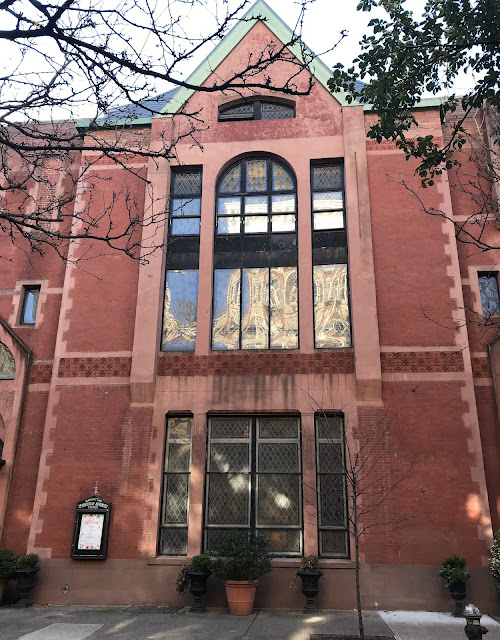 A quilt-like row of Queen Anne style terra cotta tiles enlivens the facade.
A series of pastors followed Rev. Schott.  The third, Rev. John Gunn, began work in May 1913.  He was described by The Evening World as "a progressive young man from Georgia."  The plain-speaking preacher's first sermon was "How to Get a Husband and Keep Him."  Many of his congregation were no doubt shocked when he explained to a reporter from The Evening World, "Sex is the root of life.  If the sex situation is wrong the world is wrong.  I have observed the situation here, and there is no doubt that the sex problem here is much more difficult and complex than in the West and the South."  He additionally blamed the low marriage rate among young people in part to the high cost of living in New York City.
Rev. Gunn's forthright opinions apparently did not sit well with his flock.  By 1915 he had been replaced with Dr. Madison C. Peters, who had some strong points of view, himself.  On May 23, 1915 he railed from the pulpit about the case of Leo M. Frank in Georgia.  The Jewish man had been had been convicted--on nearly no evidence--of murdering 13-year-old Mary Phagan.  After the Governor of Georgia commuted his death sentence, he was kidnapped from prison by a mob on August 16, 1915 and lynched.  In his sermon Peters declared, "the outcries of the mob against the defendant were not against Frank--it was a cry against the Jew."
Peters's condemnation of anti-Semitism was reflected in the sermon of Rev. Francis K. Shepherd two decades later.  The New York Times reported that on October 4, 1936 he "declared that this was a 'Jew-baiting age,' and that persecution of Jews existed not only in Germany but in Palestine and even this country."  He told his congregants, "Only yesterday, I received an appeal from an organization urging me to join in an effort to save this country from the Jew and his power."  He reminded the members, "Jesus said to the world, 'salvation cometh of the Jew.'" 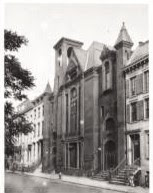 from the collection of the New York Public Library
That would be one of the last sermons Shepard preached here.  One month later, on November 26, The New York Times reported that the building had been sold to the City Temple Seventh Day Adventists Church.  "After extensive alterations have been completed, the new owner will occupy the property as its New York City church home."
Sadly, the "extensive alterations" included the modernization of Laurence B. Valk's exceptional Queen Anne facade.  The polychrome tiles above the entrances were removed, as was the  wonderful concoction of towers and other rooftop ornamentation. 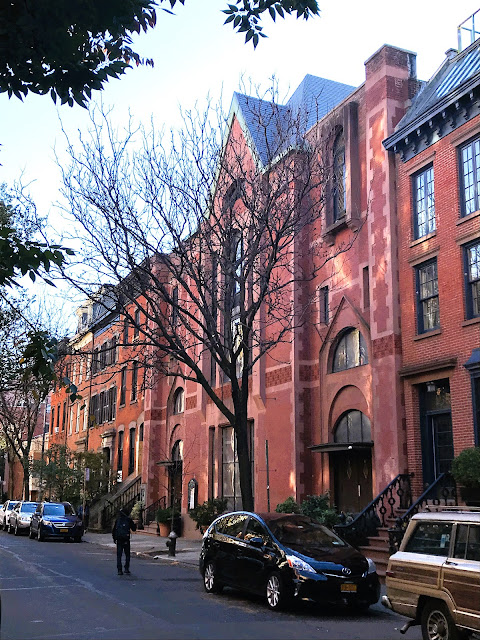 The congregation continues to worship in the building, known today as the Manhattan Seventh-Day Adventist Church.  One of the rare examples of Queen Anne ecclesiastic architecture in New York City, elements of its 1882 design can still be seen.
photographs by the author
no permission to reuse the content of this blog has been granted to LaptrinhX.com
Posted by Tom Miller at 1:00 AM