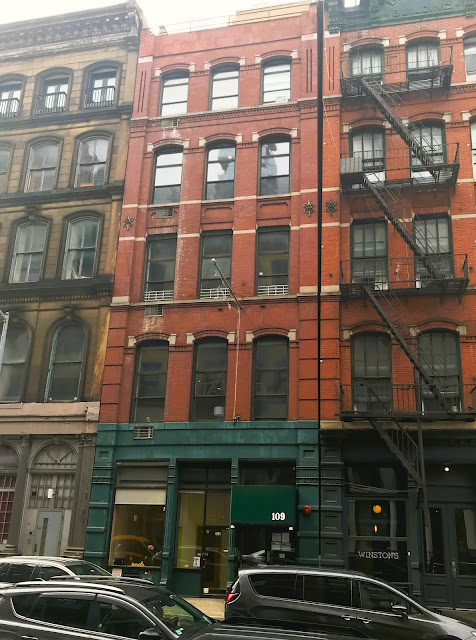 The Ray family purchased the two-and-a-half story Federal style house at 109 Reade Street in 1833, at a time when the block was lined with similar residences.  Half a century later Patrick J. Ryan ran his packing box business from the converted De Raismes house next door at 111 Reade Street.  But in 1885 he would have move his operation as Maria L. Combes planned to replace that old structure with a modern loft and store building.
The Richard Ray estate followed suit and hired the same architects Combes had commissioned, Berger & Baylies, to erect a nearly identical building on the site of the ancestral Ray house.  Completed that year (and slightly ahead of its twin), 109 Reade Street was faced in red brick above a cast iron storefront.  Its neo-Grec design included projecting pilasters at the sides, segmentally-arched windows at all but the third floor, and touches of stone trim.  Decorative cast iron tie rod plates decorated the piers between the third and fourth floors, and the eye-catching cornice included a prominent semi-circular pediment.  Perhaps because this building was completed slightly before its twin, Patrick Ryan moved his business into this structure. 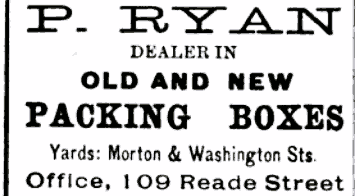 Trow's Business Directory, 1898 (copyright expired)
The 1890's was a period of extreme police corruption in New York City.  Businessmen like Patrick Ryan dealt with extortion from officers who, in Ryan's case, threatened to fine them for obstructing the sidewalk during loading and unloading freight.  And the extracted bribes were significant.
In 1894 the State Senate formed the Lexow Committee to investigate corruption within the Police Department.  Patrick Ryan was called to testify in 1895 but, like so many other businessmen who feared retribution, he was a reticent witness.  Nevertheless, when confronted with canceled checks written by him--each for $100 each and marked "police money"--he conceded that they covered police "tariffs" on the sidewalk.  Each of those checks would equal more than $3,300 in 2022.
Following Ryan's death around 1902, the P. Ryan business was inherited in equal shares by his children, Francis J. Ryan, James T. P. Ryan and Minnie A. O'Shea.  They continued to run it until about 1914.
In 1915, a new tenant moved into 109 Reade Street--the Crescent Talking Machine company, which leased to floors for storage.  Established a year earlier, the firm manufactured not only record players, but the discs themselves.  The company moved its entire New York operation to Reade Street in 1917, leasing the entire building.  In its May 15, 1917 issue, The Talking Machine World reported, "The sales department, executive offices, repair department and factory of the Crescent Talking Machine Co., Inc., are now gathered under one roof...The production of the Crescent factory is very large, for now that they are manufacturing most of their own motors; practically everything in the Crescent machine is turned out in their own factory." 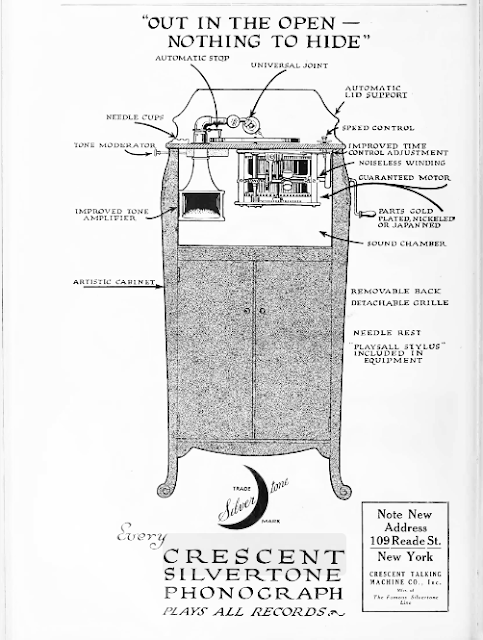 Talking Machine World, May 15, 1917 (copyright expired)
An advertisement in 1919 boasted that the Crescent phonograph, unlike some manufacturers, played all records.  "The repertoire of the Crescent is not limited to a few singers or musicians under contract with a single record manufacturer, for it plays all records made anywhere by anyone in the world."
Phonographs were not a frivolous investment.  A 1922 advertisement depicted three models, ranging in price from $68 to $198.  Converted to 2022 dollars, the most expensive, the "Queen Anne." would cost more than $3,000.
The Crescent Talking Machine Company went out of business around 1922, the same year that the Ray estate sold 109 Reade Street to the Markham Realty Company.  In reporting the sale on May 15, the New-York Tribune noted, "This is the first sale of the property since 1833." 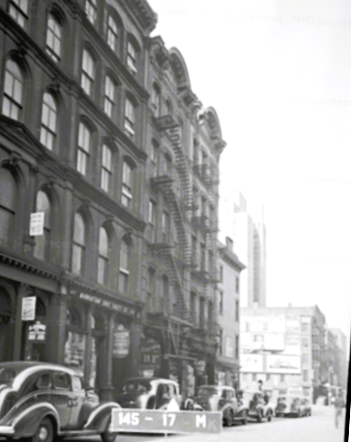 The building still sported its pedimented cornice in 1941.  via the NYC Dept of Records & Information Services
Significant change came in 1989 when a renovation was completed that resulted in one residential loft per floor above the store.  The basement space was purchased by James McGown for $1 million in 2006.  He and his tenant, Dimitri Dimoulakis, were slapped with a lawsuit in 2010 for having converted the condo into an "extreme party" space, according to The Post.  Outfitted with a stripper pole, swings, and a slide, clients cold rent the "Playful Tribeca Loft" for $400 a night.  One commentator called it, "what I imagine a residential sex club would look like."
With that chapter behind them, the residents of 109 Reade Street moved on.  Although sadly shorn of its 1885 cornice, much of the building's original detailing survives.
uncredited photographs by the author
no permission to reuse the content of this blog has been granted to LaptrinhX.com
Posted by Tom Miller at 1:00 AM