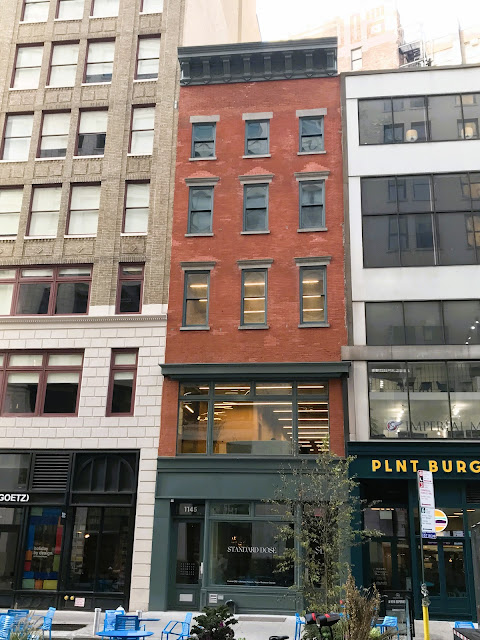 Madison Square was officially completed on May 10, 1847, and quickly high-end homes began surrounding the park.  The elegant neighborhood expanded not only up Fifth Avenue, but to the surrounding blocks.  In 1854 James Drake erected a row of three, five-story homes on Broadway, between 26th and 27th Streets, one block to the west.  The high-stooped, brick-faced Italianate residences towered above most of the neighboring homes.
Drake retained possession of the row, leasing the houses to upscale families.  His first tenants of 1145 Broadway were apparently preparing to leave in the fall of 1860, when servants began advertising for work.  The governess described herself as fluent in English and French, and the coachman wrote, "A situation is desired by a competent young man, with the best recommendations, as coachman in a physician's or private family; he has just left his last employer, with whom he has lived several years in the City and country."
It seems that when Drake advertised the house for rent in July 1863, he counted every space as a room.  "Furnished house to let--containing 22 rooms; admirably adapted for boarding or lodging; will sell the furniture as it is cheap; all in good order, with modern improvements."
The leaser took him up on the idea of an upscale "lodging" house, meaning that no meals were offered.  Four months later, on November 22, an advertisement offered, "To let--On first floor, at 1,145 Broadway, fourth door above the new St. James Hotel, corner of Twenty-sixth street, a suit of Furnished Parlors with Bedroom attached.  Also a Parlor and Bedroom on the second, and the same on the third floor, to single gentlemen only, and who will board elsewhere."
While Fifth Avenue along the park would remain a bastion of millionaires' mansions through the 1860's, commerce was already inching up Broadway.  In 1864 the basement level of 1145 Broadway had been converted a millinery shop. 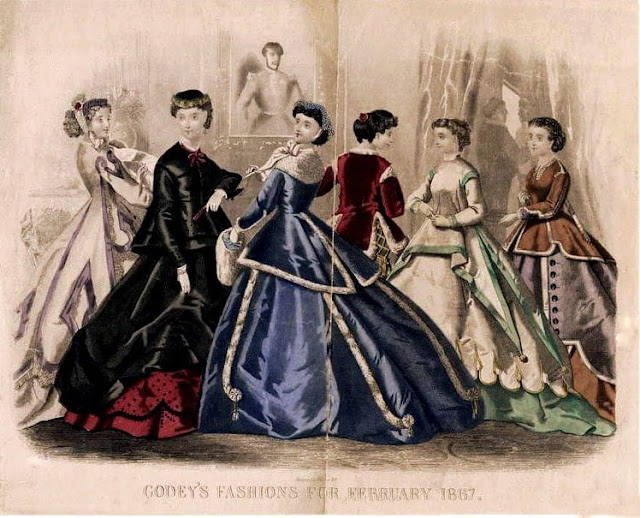 Patrons of the millinery store would be accessorizing dresses like these.  Godey's Lady's Book, 1867
Women's bonnets of the Civil War period were modest, decorated only with a few ribbons, artificial flowers, or occasionally a feather.  One creation sold here on October 27, 1864, sported a particularly expensive ornament, one which did not make it to the buyer's home.  The following day an advertisement appeared in the New York Herald:

Lost--Yesterday morning.  A Bird of Paradise Feather, in the vicinity of Eighth avenue, up Thirty-first street, to 1,145 Broadway.  By returning it to the millinery store, 1,145 Broadway, the finder will be rewarded.

The war, of course, affected all New Yorkers.  The life of one resident of 1145 Broadway, named Hewitt, changed on April 3, 1865, when his name was pulled in the draft lottery for the Union Army.
James Drake died in 1871, leaving his properties to his niece, Mary Hopeton Drake.  By the mid-1870's, only the topmost floors of 1145 Broadway were being operated as rented rooms for bachelors.  The lower floors now held shops and offices.  In 1876 G. Bunout opened a store in the former millinery shop.  His ad on April 9 read, "G. Bunout, from Paris (late with Auguste Petit), has just received from him new Hair Net for ladies' forehead; also spring styles of Chignons."  (Chignons were artificial rolls of hair, or buns, worn at the back of the head.)
Upstairs, Teresa Lynch and her son George operated a loan office, advertising, "Loans negotiated on Diamonds, Watches, Jewelry, Silverware, India Shawls, &c.  Ladies' private office."  It was, in fact, the post- Civil War version of a pawn shop.  Working with them was Maurice E. Barriere, a former classmate of George.  Things would not work out well for the employer-employee arrangement.
In 1881 Barriere was arrested after police, on a search warrant obtained by the Lynches, found "a number of stolen watches in his trunk," according to The New York Times on March 11.  Barriere gave a different slant to the story.  He said Teresa Lynch's "establishment on Broadway was simply a receptacle for stolen goods" and that "the Lynches concluded that he knew too much to be continued in their employ and quite too much to make it safe to discharge him; so they placed a number of stolen watches in his trunk."
During the trial early in March, 1882, a witness "who knew the facts in the case" convinced the jury that Barriere was telling the truth.  And the information that came out in the hearing turned the spotlight on the Lynches.  On March 11 The New York Times reported that George Lynch was a "fugitive from justice."
James E. Peppers lived in one of the bachelor apartments in the summer of 1878.  Most likely assuming that the occupants were all away for the summer, William Adams crept into the building with a supply of skeleton keys on July 11.  Unfortunately for him, Peppers was home and heard Adams "tampering at the lock from the outside."  The New York Times reported, "For the purpose of catching the intruder, he arose from his seat and, stealthily approaching the door, unlocked it in 'jiffy,' and opening it, discovered [Adams] in the hallways with a false key in his hand."  Despite the evidence against him, Adams pleaded not guilty.
Another tenant at the time was not so upstanding as James E. Peppers.  Earlier that year Police Captain Alexander S. Williams was on trial before the Police Commissioners for accepting money and gifts from brothel owners and gamblers.  One charge was for "refusing to take action against the proprietors of a gambling-house...situated at 1,145 Broadway."  Among the witnesses was Michael Dunn, who testified to going to the apartment on March 13, 1879, playing faro and losing $8.  He went directly to the 13th Street Station and complained to Williams, who refused to act.  Williams was allowed to resign and the gambling operation ceased to exist.
Around 1883 H. W. Hunter opened his optician's office here.  He not only sold eyeglasses, like his "cylindrical spectacles," but "opera, field and marine glasses."  He was also the agent for "the celebrated artificial eyes of Ludwig Muller, Germany." 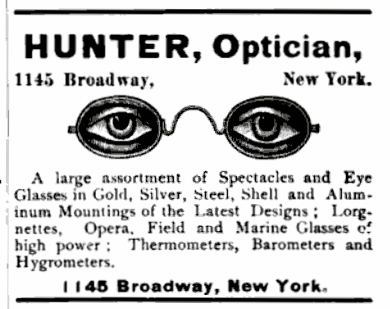 The University Magazine, December 1893 (copyright expired)
Mary Hopeton Drake died in 1884, leaving 1145 Broadway to her nephew, Hopeton Drake Atterbury.  That same year the first of the theatrical offices moved into the building, John Templeton's "The Opera Office."  It was quickly followed by the booking offices of J. Tannenbaum, who covered "the Southern Circuit;" H. Greenwall & Son; theatrical attorneys Pratt & King, which established its offices here in 1888; Randall & Dickson; the office of E. D. Price, the manager of the Broadway Theatre; and theatrical agent J. Charles Davis.

H. Greenwall & Son was just one of several theatrical management and booking offices in the building.  The New York Dramatic Mirror, 1888 (copyright expired)
H. W. Hunter's optician office remained at least through 1893.  It was taken over by John N. Todd, who had been in the jewelry business for years.  A widower, he moved into one of the top floor apartments.  It was the scene of his funeral on March 10, 1897, following his death after a two-day illness.  The optical shop was next taken over by Alexander Shaw.
On March 23, 1899, The New York Times reported that Hopeton Drake Atterbury had hired architect Daniel Burgess to design $4,000 in renovations to the "five-story brick and stone bachelor apartment house, with stores."  The alterations, costing the equivalent of more than $130,000 in 2022, were significant.  It was most likely at this time that the stoop was removed and show windows installed.
Alexander Shaw would operate the optician shop at least through 1905.  He was infuriated in 1903 when the work to extend the Broadway subway reached the neighborhood.  The problem was, according to him and other businessmen, the use of the "ditch system," opening a massive gouge in Broadway and disrupting businesses.  On August 11, 1903 the New-York Tribune said, "There was an informal conference yesterday of some of the men who have taken an active part in the agitation to prevent the tunnelling [sic] of Broadway from Union Square to Forty-second st. by the ditch system."  Alexander Shaw was the secretary of the "Committee of Fifty" that protested the work.
In 1906 Hopeton Drake Atterbury modernized the building again, hiring architect J. Wolf to install new stairs, interior walls and show windows.  The renovations were almost assuredly the result of lease negotiations with Huyler's, Inc.
While working in his father's bakery and ice cream shop on Jane Street in Greenwich Village, John Seys Huyler had experimented with making chewy molasses candy.  He opened his first shop in 1876 age the age of 30, and in 1881 incorporated the business as Huyler's, Inc.   On February 24, 1906, the New-York Tribune reported that a new branch at 1145 Broadway would open on May 1, "where the confections for which the firm is renowned will be sold."  There were also a Huyler's store in the fashionable summer resorts of Newport, Saratoga, and Long Branch, New Jersey. 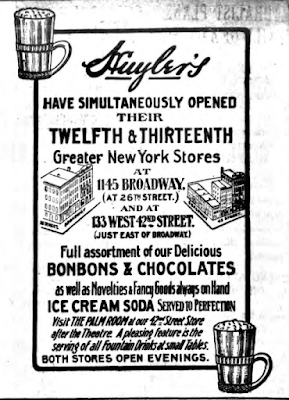 The New York Press, August 16, 1906 (copyright expired)
In March 1916, ten years after moving in, Huyler's renewed its lease "for a long term," according to the Record & Guide.  It remained through 1922.  The following year architect Harry M. Paradica renovated the building for another candy firm, Maillard's confectioners.  The second floor was converted to a connected tea room, while the third floor housed light manufacturing and the upper two floors were used only for storage.
Before long, Thomas Jadjidian and Startis Nerakian took over the two lower floors, operating the confectionary store and restaurant as the Purity Shop.  The venture was not successful, however, and it ended when the store--and potentially the building--was nearly destroyed by flames.  Investigators sifting through the ashes found "several pasteboard boxes, which gave off a strong odor of ether in the restaurant on the ground floors, as well as at points on the upper floors," reported the New York Evening Post on April 9, 1927.  Both men were arrested on suspicion of arson.
The building was renovated yet again 1n 1932 by architect Herman K. Sohn.  The ground floor restaurant and second floor tearoom became home to the Blue Kitchen, which would remain for years. 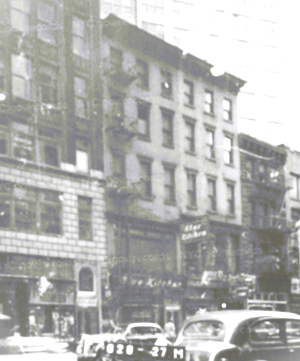 The Blue Kitchens operated from the two lower floors when this photo was snapped in 1941.  image via the NYC Dept of Records & Information Services.
The structure was threatened by fire again on Valentine's Day, 1983.  The blaze, which broke out in the basement, forced an evacuation of the building.  Fire Department spokesperson Veronica Shea told Newsday, "fire fighters broke through the wall of an adjoining building at 1147 Broadway to get to the fire." 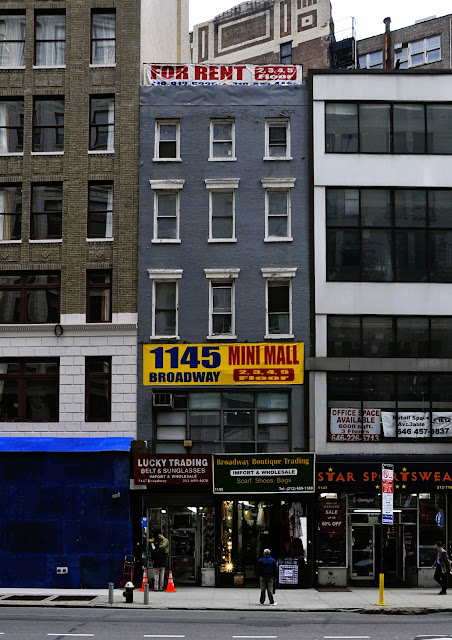 photo by Costar, via commercialobserver.com
When Pan Brothers Associates purchased 1145 Broadway in April, 2015 for $8.9 million, it was sadly abused.  Painted gray, it had lost its cornice and top floor lintels, the ground floor was a cacophony of garish signage and two discordant storefronts, and the second floor show window had been disfigured with multiple panes.
Working with the Landmarks Preservation Commission, architect Joseph Smerina of New York Design Architects restored the facade.  The two lower floors were remodeled to approximate the appearance when the Blue Kitchen operated here, and a new cornice was fashioned. 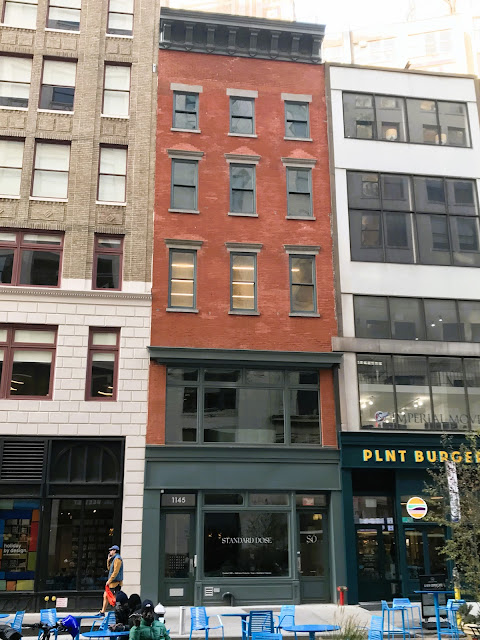