In the early 1840s Lafayette Place remained one of Manhattan's most exclusive residential areas.  The elegant, marble-faced LaGrange Terrace, completed in 1833, set the tone and was soon followed by wide, Greek Revival mansions.

Benjamin Lincoln Swan's 45-foot wide home at No. 29 Lafayette Place edged up against the southern edge of LaGrange Terrace.  Faced in red brick and trimmed in brownstone, it was four stories tall above the basement level and featured a cast iron balcony along the parlor level and a columned portico.

Eminently successful and wealthy, he retired from active business in 1822 to devote his time "to the service of his fellow-citizens," according to historian William Van Rensselaer Miller in his 1896 Select Organizations in the United States.  While technically retired, he remained an active member of the Chamber of Commerce and a director in the Bank of America and the New York Life & Trust Co.  He was a force within the American Bible Society for decades.

In 1842 sons Robert, Benjamin and Otis were still living in the house.  Benjamin was a respected shipchandler at 30 South Street, and Otis was a lawyer with offices on Wall Street.  Mary had married Charles N. Fearing, of Fearing & Hall dry goods, in 1839 and the couple,too, lived in the Lafayette Place house.

In 1855 four of the Swan sons formed the dry goods firm of Frederick G. Swan.  Benjamin and Edward married sisters, Caroline and Julia Post. (Benjamin and his wife moved to their own home at No. 5 West 20th Street around 1861.)  Almost all the Swan children maintained summer estates in Oyster Bay, Long island.

Disaster came on February 7, 1855 when an overheated flue sparked a fire on the third floor around 3:20 in the afternoon.  The New York Herald reported "The inmates of the house soon found it was beyond their control, and an alarm was given."  The fire fighters found "that the fire had spread between the lathe and plaster and run from floor to floor."

The intense smoke make it nearly impossible for the men to grope their way through the house.  "Great exertions were made to save the furniture, and most of it was taken out from the parlors; but on the upper stories very little was removed, in consequence of the dense smoke."  The article noted that police moved in to protect the neighboring houses "from depredations of thieves, of which there were a large number very ready to enter the houses, under the pretense of assisting to save property."

The frigid February temperatures hampered the fight, The New York Times noting that the water froze in the hose.  When the fire was finally extinguished at 7:30 that evening, the top floors were gutted and the lower floors flooded with freezing water.  Damages to the house were estimated at $15,000 and to the furnishings $10,000 (a total of about $731,000 today).

Following Mary Swan's death in 1857 her daughter, Mary Fearing, most likely took over the task of running the household.  She seems to have had her hands full in keeping the positions necessary to run a house of adults and, now children, filled.

Her regular advertisements, always in The New York Herald, were similarly worded.  On April 22, 1858 she looked for "A steady woman, as cook in a private family; one who understands her business thoroughly" and six months later she sought "Wanted--In a private family, a respectable woman as laundress; one that understands her business and is willing to make herself generally useful."  (Being "generally useful" was necessary on non-laundry days.)

On a single day in October 1860 two advertisement ran, one for "An experienced woman, as waitress, in a private family" and another for a "steady, quiet woman, as laundress."  As always they should "understand her business thoroughly."  A "waitress" was a maid whose duties were to serve in the dining room, bring tea or other refreshments to the family, and handle similar responsibilities above those of a chamber maid.

Following Benjamin Swan's death in 1866, Mary and Charles Fearing remained in No. 29 Lafayette Street.   By now Charles was retired from his position as senior partner in the Auburn Wool Works.  Their two sons, Edward and Charles, soon left.  Charles married Mary Putnam on July 9, 1866 and in 1868 opened his stock-brokerage office.  The couple summered in Newport.  Edward initially entered his father's firm, before marrying and later going into the commission business.

Around New Years Eve 1885 Charles N. Fearing fell ill with pneumonia.  He died on January 6, 1886 in the Lafayette Place house at the age of 75.  The Swan children soon put the family mansion on the market.  It was purchased by Catharine Lorillard Wolfe on June 28 for $70,000--about $1.9 million today.

Catharine, who lived in her own lavish home on Union Square, had no intentions of moving into the mansion.  One of New York's most munificent philanthropists, she laid plans to renovate it and present it to the Episcopal Church as the residence for Bishop Henry Codman Potter.  Catharine commissioned the renowned firm of Renwick, Aspinwall & Russell to transformed the outdated house to a modern residence.

On September 10 The New York Times reported "Catharine L. Wolfe is going to spend $40,000 in alterations and improvements on No. 29 Lafayette-place.  The front will be taken down and replaced by one of marble, terra-cotta and brick, and a two-story extension, 40 by 70 feet, will be built."

Catharine L. Wolfe died in 1887 and would not suffer the disappointment that Potter never moved into the house.  Instead, he and his wife, Eliza, remained in their mansion at No. 10 Washington Square.  The See House, while officially the bishop's residence, was mainly used instead for high-level church meetings.  And none could be more important than those surrounding Potter's pet project, the Cathedral of Saint John the Divine.

Among the first meetings was on November 8, 1887 during which the Protestant Episcopal Cathedral Committee ratified the purchase of the land and discussed raising $10 million "or more" for a building fund.  Among those present with Potter were William W. Astor, Cornelius Vanderbilt, and J. Pierpont Morgan.

The opulence of the interiors was evidenced that year when the See House loaned artworks to The Architectural League's third annual exhibition.  Among the 14 paintings were works by Fra Fillippo Lippi, Chirlandago, Grotto, Raphael, among masters.

Around 1892 the building's name was changed to the Diocesan House.  It was not only the scene of meetings, but of church hearings.  One of the most publicized was the infamous Jenks Divorce Case in 1891.  Maud E Littlejohn and Almet F. Jenks were married on December 5, 1878.  The New York Times said "It was a social event and gifts valued at $50,000 were received."

Maud was not only wealthy and socially prominent, she was the daughter of Bishop Abram Newkirk Littlejohn of Long Island.  He called a meeting of bishops in the Diocesan House on April 13, 1891 to settle the problem.  When the meeting adjoined, Maud had never been married in the eyes of the church.  The annulment decree said in part "in our opinion the said marriage was null and void ab initio" and according to the law and discipline of the Church it "was the same as though such marriage had not taken place."  Not surprisingly, "the annulment provoked wide discussion," as reported by The New York Times.

The Diocesan House contained offices for the Bishop, the Arch Deacon of New York, the Presiding Bishop of the Church, the Standing Committee of the Diocese and the Secretary of the House of Bishop, a reading room, a private chapel for Potter, and sleeping quarters for visiting clergy.  In 1897, when Lafayette Place was extended southward, the building received the new address of 416 Lafayette Street.

In her will Catharine Wolfe had left a generous endowment fund to maintain the property.  In 1907 church's annual report noted that the fund still had $50,000, "the income of which is to be expended for its support and maintenance."

As the years passed, the Diocesan House continued to host the meetings of the Cathedral Committee, hold trials on issues of wayward clergy and church law, and confront social problems like temperance.  But in 1915 a completely different activity took place here.  A majority of the toys children received as Christmas presents had always been produced in Europe, notably in Germany.  Now with war raging across the continent, there was no way of importing them.

On December 12 The New York Times reported "Things were really looking serious, people said.  That was about the fifteenth of last May, and at that very moment the New York Santa Claus business came into being."  Christine S. Foster, described by the newspaper as "a young society woman," recognized the deficiency of Christmas toys and the need of unemployed older men for work.  With her own funds she developed The Old Men's Toy Shop in rooms provided by the diocese.

Workers, the oldest of whom was 84, received fifty cents a day and 10 cents for lunch.  By the time of the article there were 100 of them, making wooden canal boats, horses, cars and other toys.

As the years passed, the Diocesan House served changing purposes.  While it continued to be the center of the fundraising efforts for the Cathedral of Saint John the Divine, the Church Association for Advancing Interest of Labor Library was here by 1915, and within the decade the Church Army of the United States established its offices in the building.

By mid-century the Lafayette Street block was one of factories and commerce.  The Diocese sold the property in July 1958,  In reporting the sale The New York Times got the history of the building slightly wrong, naming Catharine Lorillard Wolfe's family as the original owners.  "It was the private mansion of the Lorillard family generations ago when Lafayette and Bond Street formed the hub of an area that contained some of the city's most fashionable residences."

The new owners were realty investors operating as the 416 Properties, Inc.  They announced plans "to alter the structure into forty-one, air-conditioned apartments."  The Times said "The proposed improvements include an automatic elevator, an incinerator and modern bathrooms and kitchens."

The "improvements" did not include overwhelming architectural beauty.   And while technically the Diocesan House was remodeled, not demolished, most would agree that it has been lost. 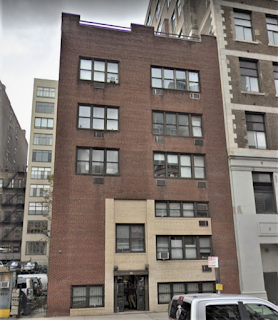