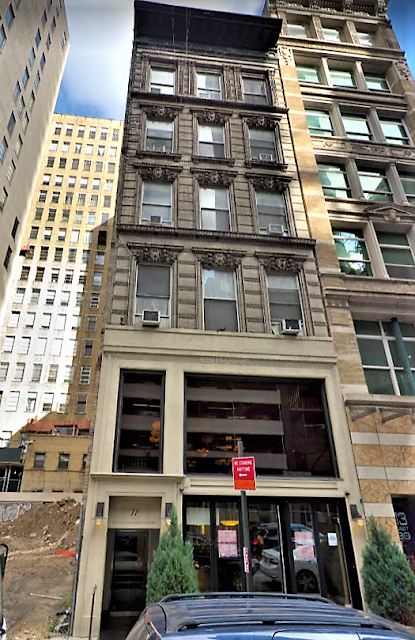 In 1895 partners Edgar G. Anthony and Haskel Silverman ran their women's apparel making business, Anthony & Silverman, from the altered rowhouse at No. 9 East 30th Street, between Fifth and Madison Avenues.  But in July 1897, following the break-up of the partnership, Silverman purchased the brownstone next door at No. 11 for $37,000.  It was a significant outlay, equal to more than $1 million today.

Silverman commissioned architect William J. Fryer to make significant changes to the previously-altered house.   He filed plans in September that year for "front and rear and interior alterations" at a projected cost of $12,500.

Fryer was eminently respected within the building community.  Early in his career he became interested in "fireproof construction," and claimed to have co-invented the hollow tile fireproof block with J. G. Johnston.  By now he held the position of Chairman of the Board of Examiners and was responsible for the laws that placed New York City ahead of other metropolises in terms of building codes.  He nevertheless retained his private practice.

Fryer's update replaced the brownstone of the four upper floors with gray brick trimmed in terra cotta.  Exuberant Beaus Arts decorations--like the tangle of bows and fruits above the openings of the third through fifth floors--coexisted with prim Renaissance Revival pilasters framing those of the sixth.  The fifth and sixth floors were separated by an especially handsome cornice in the form of a stretched garland. 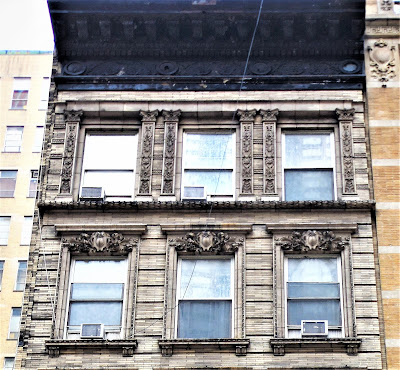 The old brownstone, described as five stories in building reports, sat above an English basement.  Without the stoop the altered structure would have now become six stories in official records.  But (somewhat confusingly today) because Fryer included a cast iron staircase leading to the former parlor floor, building documents initially continued to describe the structure as five stories.

Silverman moved his operation into new quarters where he continued to make ladies' riding habits, many of which were of his own design.  The upper floors contained apartments.

Silverman's riding skirt was intended, according to his patent application, to "conform to the figure of the rider when seated upon the saddle, present a graceful appearance, and be free from the unsightly wrinkles common in ridingskirts."

In the spring of 1903 Silverman brought William J. Fryer back to redo the storefront in what was still being called a "five-story dwelling and shop."  Within the year he sold the operation and the building to Robert Pluym.

Listed as a "ladies' tailor and habit maker," Pluym continued Silverman's focus on riding outfits.  He was highly influential in the industry; so much so that it was probably his appointment as national president of the politically-powerful Ladies' Tailors' and Dressmakers' Association of America, that prompted him to move to Washington DC and sell No. 11 to Edmund Abdy Hurry around 1910.

Somewhat ironically, Hurry leased one floor to Kaskel Silverman's old partner, ladies' tailor E. G. Anthony.  The other commercial floor was taken by the Marks Adjustable Chair Company.   That firm's innovative furniture worked on the concept of notches and bars that allowed the user to change the angle of the back.  Still used in patio lounges and deck chairs today, it appeared in parlors throughout the country.


In appears that in 1913 Hurray converted the upper floors to lofts.  That year both E. G. Anthony and Marks Adjustable Chair were gone.  The outside staircase was still there, so when the Campfire Outfitting Co. leased the second floor, it was still called the "parlor floor store."   In November, the same month that Campfire Outfitting signed its lease, Parfumerie Riviera took the sixth floor as a branch of its Fifth Avenue shop.

Harper's Bazaar listed Parfumerie Riviera as a "specialty shop."  The women who patronized the upscale perfume store were refined, educated and well-to-do.  The shop's advertisements were often entirely in French, such as the May 1914 ad that read "Specialties de Beaute Objets de Toilette, Articles de Paris."  Shoppers could expect to pay dearly for scents like Katyonka, "a la Russe, the most beautiful and lasting perfume in the world."  The $9 per ounce price would be equal to about $225 today.


In December 1919 the Edmund Abdy Hurry estate commissioned architects Bart & John P. Walther to again update the building.  It was most likely at this time that the exterior staircase was removed.  The improvements seem to have been in preparation for selling the property, and in 1920 the Manport Realty Corporation took title.

Significant change came eight years later when Manport Realty sold No. 11 Knott Corporation, owners of a chain of hotels.  On November 4, 1928 The New York Times reported that the building had been "converted from a loft building into eight apartments and a restaurant."  (In fact, there were eight apartments per floor, not in total, with four on the top floor).  The Department of Buildings certificate listed them as "non-housekeeping apartments," which meant there were no kitchens.

One resident in particular made a resourceful use of her apartment.  On April 24, 1932 Herriet Menken, writing in The New York Times reported that stages had been cropping up in "town halls, hotel rooms and studios to stage plays for your children."  She said that "One of the most active of these groups is led by Mrs. Clare Tree Major at her "combined rehearsal room, office and studio at 11 East Thirtieth Street."

Clare Tree Major had come from the London stage to New York in 1914 and started her children's theater three years later.  Although the plays were for youngsters, she did not employ any.  "Mrs. Major has only adults in her casts, for, she claimed, it takes adults to give good performances.  'Besides, I can't carry stage mothers around.'"

A renovation completed in 2015 retained the 1928 configuration of eight apartments on the third through fifth floors and four on the sixth.  The two-story commercial front was modernized with an architecturally sympathetic make-over.  And while the upper facade could use a gentle cleaning and the cast metal cornice needs repair, William J. Fryer's striking design survives intact on the upper floors.