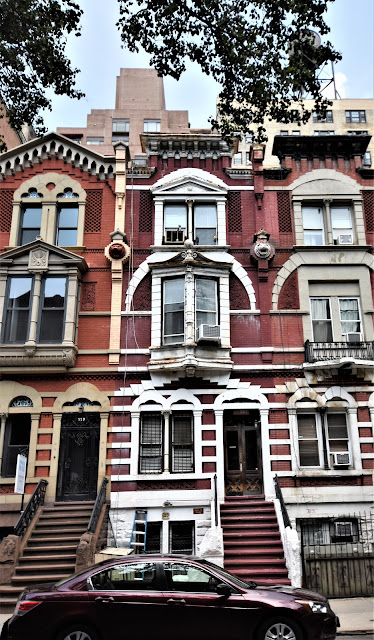 On July 11, 1885 The Real Estate Record & Builders' Guide announced "R. Guastavino has plans under way for six handsome three and four-story and basement high stoop private dwellings, 16 and 19 feet front each...They will be novel in their architecture, which will be a combination of Moorish and Renaissance."  The row, on the north side of 78th Street between Columbus and Amsterdam Avenues, was commissioned by developer Bernard S. Levy.  Each was projected to cost about $197,000 in today's dollars.

Architect Rafael Guastavino had arrived in New York City from Spain only four years earlier.  Trained in Barcelona, he was fascinated with the Catalan vault--a tremendously strong, curved structure constructed or veneered with brick or tile.  The same year that he accepted Levy's commission for the houses at Nos. 121 through 131 West 78th Street he patented his "Tile Arch System."

The architect’s Spanish background shone through and the resulting row, completed in 1886, was a delight of Moorish Revival confections.   Each of the homes flowed harmoniously from one to the other; yet a second glance revealed that no two houses were exactly alike.  Guastavino used red brick and sand-colored stone on the three upper stories which sat on a rough-cut brownstone base.  Moorish motifs (a snarling Syrian-style lion separated each building at the third floor) blended with Romanesque and a touch of Queen Anne to create the up-to-the-minute residential designs.

The Record & Guide described the interior details.  "The parlor floors and all the staircases are in black walnut, the second floors in mahogany, the third and fourth in poplar.  Handsomely-carved mantels of these woods, with large beveled mirrors and fine brass work are found in all the principal rooms.  Stained glass is used over the doors and windows with good taste and effect, a few lights of right colors adding much to the cheerfulness and beauty of the halls and rooms."  The bathrooms were finished in cherry and deemed "large and complete."

The journal noted the modern conveniences, including "electric bells, means for electric lights and speaking tubes" on all floors.  Dumb waiters ran from the basement to the top floor, suggesting that owners could take breakfast in their bedrooms.  The writer was taken with the service areas.  "The facilities for the work of the cook and the laundress are the best, an abundance of stationary tubs being provided, with ample space for ironing and drying, while the clean grass plots look as if they were already expecting the muslins and laces which will some-day be laid on them for bleaching."

Bernard Levy was apparently equally pleased with the project.  He not only moved into No. 121, but put Guastavino to work designing a second row on the opposite side of the street.

The parlor floor openings of No. 127 wore stylized trefoil arches that sprouted striking stairstepping stones that in turn supported the two-faced bay above.  The bay was flanked by quarter-round spandrels filled with elaborate Queen Anne terra cotta designs.  Moorish turned to classical in the top floor windows where a less angry version of the lion's head decorated the triangular pediment.

The house was purchased by George West Van Siclen and his wife, the former Sarah Jane Gregory.  Five of their seven children had died in infancy.  Sons Arthur James and Matthew were 17 and 6 years old respectively when the family moved in.

Born on August 13, 1840, Van Siclen was a graduate of Columbia University.  His family traced its American lineage to Ferdinand Van Sicklen who settled in Gravesend, Long Island in 1642.  Proud of this Dutch heritage, George was a founder of The Holland Society of New York.

An expert in two vastly different areas--real estate and sports fishing--he was the author of A Guide to Buyers and Sellers of Real Estate and Fysshe and Fysshynge.  He also published a translation of Andrew Carnegie's Triumphant Democracy into Dutch.  An attorney, for years he served as the Law Editor of the Real Estate Record & Guide.  His wealth, however, came from banking.  He was a founder of both the Title Guarantee and Trust Co. of New York and the Holland Trust Company of New York.

The Van Siclen home was filled with heirlooms, including family deeds from Belgium dating to the 15th century.  Especially interesting were two family portraits--Dr. Moses Younglove and his wife, Polly Patterson Younglove.  The doctor had served under General Nicholas Herkimer during the Revolution.  The University Magazine reported decades later that at the battle of Oriskany, he "was taken prisoner, made to 'run the gauntlet' by the Indians, broke through the line, was scalped and lived."

Van Siclen was secretary of the Holland Trust Company for three years and, as such, on April 7, 1893 was called to testify in an action against the institution by Oliver D. Robinson.  The aggressive tactics of the prosecution's attorney, Colonel Bacon, were too much for Van Siclen to bear.

Collective gasps in the courtyard most likely followed Van Siclen's shocking breach of Victorian deportment.  The Sun reported "On cross-examination he lost his temper and called Col. Baker a liar.  Before Col. Baken could reply Judge Truax called Mr. Van Siclen to order and told him that such language could not be tolerated in court, and that if it occurred again he would have to punish him."

Chagrined, Van Siclen apologized, saying he meant no disrespect to the Court and that he had spoken in heat.  The especially tense proceedings, however, continued when the opposing lawyers "got into another wrangle," as worded by the newspaper.  The judge suggested "that if they wanted to settle their differences they could do so out of court."  He offered to postpone the case until the lawyers had battled it out on the street.

Sarah Jane died on June 18, 1898 at the age of 56.  Her funeral was held in the house three days later. Before long George married Grace Cornell Hogarth; but their life together would not be long-lived.

On Sunday April 19, 1903 Van Siclen died at the age of 62.  The Record & Guide listed his memberships in the Twilight Club, the New England Society, the Sons of the American Revolution and the American Geographical Society; but they were just a few of the many organizations in which he was involved.

By 1917 Wemple had left his position and gone into private practice.  He became the corporate attorney for the Hudson Dock and Terminal Company and accepted individual cases, perhaps none so interesting as that of Chandra Chakraberty.

Federal investigators had their hands full with German spies and terrorists living and plotting on American soil.  At the same time, unrest in India against the English colonial government was heating up.  The German government took advantage of the situation by bargaining with Indian nationals.

On March 11, 1917 The Sun reported "Papers seized in the office of Capt. Franz von Papen...when Wolf von Igel was arrested in connection with a plot to blow up the Welland Canal in Canada, showed that Van Papen and Von Igel had planned extensively for uprisings in India."

They papers also suggested that Bengali-born Dr. Chandra Chakraberty and Ernst M. Sekunna, a German, "had a committee of Hindus in America who had charge of the sedition plots."  Chakraberty was apparently given a generous budget from the German Government to use in seducing Americans into the plot.  When he was arrested on March 5, 1917, Chakraberty hired Wemple as his defense attorney.

Wemple had a challenge in front of him.  In Chakraberty's West 120th Street apartment detectives found "a number of cancelled checks made payable to Americans...It is hinted that Americans were in the alleged conspiracy," reported The Sun on March 11.

Chakraberty was released on bail on March 6, but it was quickly revoked.  The Sun reported "The Hindu, accompanied by Sekunna and his attorney, William L. Wemple, walked up to Police Headquarters shortly before 6 o'clock bareheaded, but carrying his hat in his hand."

Things turned out badly for Wemple's client.  On April 13, 197 The Indianapolis News reported that "Dr. Ernst Sekunna and Wolf von Igel, Germans, and Chandra Chakraberty and Heramba Gupta, Hindoos, were indicted by a federal grand jury yesterday for conspiracy in setting on a foot a military expedition in this country against a friendly nation.  They were charged with conspiracy to foment a rebellion in India."

The renowned pianist accompanied vocalists on stage, sometimes traveling to Europe with their concert tours.  When she opened her studio in No. 127 she was proudest of being the accompanist to operatic soprano Sue Harvard.  And when Music News reported on Harvard's 1922 London engagement, it noted "Miss Harvard's American accompanist, Miss Ethel Watson usher, was a decided acquisition to the program, and came in for her share of honors."

Usher shared her studio with voice coach Virginia Los Kamp.  On December 28, 1922 The Music Magazine reported that the pair "gave a tea at their headquarters, 127 West Seventy-eighth street, December 20, the former singing Dawn in the Desert and an old Irish song with fine expression and style."  Several of Los Kamp's students performed as well.  The magazine added "Miss Usher, perhaps best known as accompanist for Sue Harvest (she went with her to England and Wales last summer) played the accompaniments in finished style."

Earning less glowing publicity was another roomer, James Morrow.  He was the manager of the 42nd Street branch of the stock brokerage firm of Clark, Childs & Co.   Also working there was "stock bulletin runner" Harry Fallon.  The pair devised a sideline in the office to make extra money.

Two days after Ethel and Virginia held their musical tea, detectives walked into the 42nd Street office and arrested Morrow and Fallon "before a large crowd of customers," according to The New York Herald.  The article explained that Patrolmen Frank Kincher and John Flattery had learned that horse race gambling was taking place there.

Kincher tapped the office's telephones and listened in as Morrow and Fallon took bets.   The newspaper wrote "The anti-gambling crusade was extended yesterday to warfare against race bookmaking when James Morrow of 127 West Seventy-eighth street and Harry Fallon of 1213 Eighth avenue, Brooklyn, were arraigned before Magistrate Joseph E. Corrigan...on charges of bookmaking."

After the 78th Street block suffered decline during the Depression years, No. 127 received a make-over of sorts in 1940 when it was converted to three furnished rooms in the basement, two apartments each on the first and second floors, and four furnished rooms on the third.  The last quarter of the 20th century was kinder when the house was converted to one apartment in the basement, two on the parlor floor, and a duplex above.

At some point around this time, all the houses in the Guastavino row were painted red and white, covering over the architect's purposeful contrast of textures and colors.   The row was soon locally called "the red and whites." 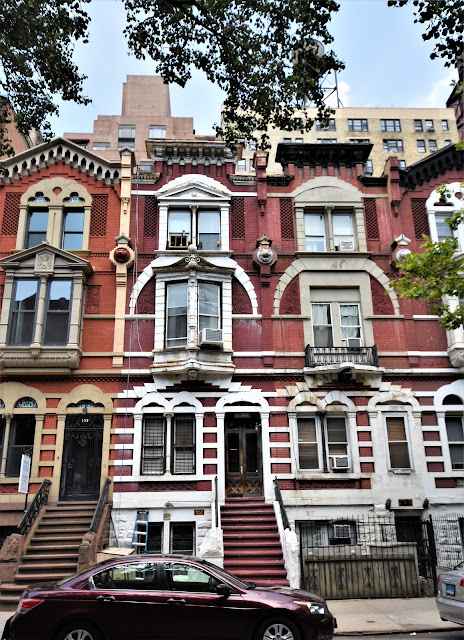 Then, in 2014, a meticulous restoration of No. 129 next door was completed.  While the project gloriously resurrected and brick, stone and terra cotta and earned the Lucy G. Moses Preservation Award in 2015; not everyone was so happy.

The owners of No. 127, Dr. Eric and Suzanne Walther, were split.  He was pleased with the restoration; while Suzanne complained to The New York Times journalist Christopher Gray, "I hate it.  It ruins the unity of the row."

Despite their coat of 20th century make-up, the row is a rare and wonderful example of Rafael Guastavino's early work in America.