When the owners of the three-story house at No. 34 Commerce Street rented the parlor and basement levels in March 1854, their advertisement mentioned the "marble mantels and folding doors on the first floor."  The following year they suggested that "gas can be put in, if desired"--evidence of their comfortable financial situation.  By the first years of the 1860's it was home to the William Kingsland family.   The funeral of Kingsland's wife, Eliza G. Kingsland was held in the house on August 7, 1867.

At the time of Mrs. Kingsland's death, R. H. McDonald was embarking on a new business venture.  Around 1862 Joseph Walker, who styled himself as "Dr. J. Walker," began producing a patent medicine which he called Dr. J. Walker's California Vinegar Bitters.  He purchased some of the ingredients from a New York City dealer, R. H. McDonald & Co.

Then, in 1868, McDonald and his partner, J. C. Spencer, proposed a deal whereby they would manufacture the tonic and act as its the sole agents.  Walker moved his production and distribution to New York City in 1869.  He later explained to a reporter from The American Journal of Digestive Diseases, "we first commenced business in Platt Street, and continued there for a month or two; from there we went to Commerce Street."

On November 13, 1869 the Real Estate Record & Builders' Guide reported that R. H. McDonald & Co. would erect a "one story open front wagon shed" at Nos. 32 and 34 Commerce Street, on the site of the former Kingsland house.  Whether McDonald purposely misrepresented the building--perhaps to avoid property taxes--is unknown.  But the resultant structure was by no means a one-story open-front wagon shed.

Instead, a two-story brick factory was completed within months.  On February 8, 1870 an advertisement in The New York Herald read "Wanted--At the California Vinegar Bitters office, a smart boy, from 14 to 16 years of age, who writes a good hand and resides with his parents."  The stipulation that the boy live with his parents eliminated what were commonly referred to as "street arabs;" the homeless boys who would be likely to pilfer goods or money.

Someone trusted with cash--possibly McDonald himself--was careless a few months later.  On May 18 an announcement in The New York Herald read "Lost--On Monday afternoon, shortly after six o'clock, in going from the California Vinegar Bitters Manufactory, 32 and 34 Commerce street to corner of Morton and Hudson streets, an envelope containing $178 in currency and greenbacks.  The person finding it will be very liberally rewarded by returning it to the above number."

The lost cash would equal about $3,450 today and one wonders what reward could inspire the finder to return it.

McDonald had by now changed the name of his firm to the R. H. McDonald Drug Co.  He marketed the California Vinegar Bitters through an aggressive advertising program.  The tonic was called "The great blood purifier and life-giving principle" and was guaranteed to cure scores of disorders, including "heart and chest, liver and kidney complaints, stomach ache, jaundice, gout and fits, dizziness...biliousness, dysentary, piles, etc."

The box promised that "pin, tape and other worms lurking in the system of so many thousands are effectually destroyed and removed;" and that for "female complaints, in young or old, married or single, at the dawn of womanhood or the turn of life, this tonic betters has no equal."

The wily McDonald marketed the product not only as a tonic, but as a temperance drink.  An 1871 ad mentioned in part "The liquor traffic annually sends to prison 100,000 persons, reduces 200,000 children to a state worse than orphanage, sends 60,000 annually to drunkard's graves, and makes 600,000 drunkards."

McDonald's sanctimonious claims, however, were shot down by Professor William R. Nichols of the Boston Board of Health.  Suspicious, he analyzed the contents and announced to the East Saginaw Sanitary Convention in December 1884 that Dr. J. Walker's California Vinegar Bitters contained six percent alcohol.

Years before that, however, things had become strained between McDonald and Joseph Walker.  Walker was in the factory only one or two months in the fall and again in the spring.  "The balance of the year I consumed in selling," he explained in The American Journal of Digestive Diseases.  When he was in town, he had heated discussions with McDonald about the advertising campaign.  "I don't remember particularly what I said; only that he was spending money that I wanted."

Indeed, McDonald had stopped paying his partner his share of the income.  Things grew uglier when McDonald refused to show the books to Walker or his son, Josiah; and eventually locked them out of the factory.  In 1872 McDonald moved the operation to Washington Street.  After years of receiving no money from the sale of his tonic, Joseph Walker finally sued in 1877 for $5,000--a little over $120,000 today.

In the meantime, the Commerce Street factory had been converted to a storage facility by Jas. Michaeles & Son.  A July 1872 advertisement promised "Furniture &c. taken on storage at the lowest rates, packed and shipped to all parts of the city and country; ample room for storage of all kinds of merchandise."  The firm's successful business led it to expand into the building steps away at No. 38 Commerce Street the following year.

The dyeing operation remained in the building at least until 1898 when it was sold to Michael H. Cardozo.  In 1896 A. F. Soria employed six men and eight women who worked 54 hours per week.  One can only imagine the miserable conditions inside the brick building with large vats of boiling water creating a constant hot and humid work environment.

In the first decades of the 20th century the old factory building was in serious disrepair.  In 1912 a demolition permit was issued for the property.  For whatever reason, the owners never went ahead with the project.

By now Greenwich Village was the epicenter of New York City's artistic community.  In October 1923 a group of artists, writers and performers--including poet Edna St. Vincent Millay--purchased a cluster of the old houses around the Commerce and Bedford Street intersection in an effort to save them from apartment building developers.  The houses were renovated and restored as private homes.

No. 32-34 was converted to apartments shortly afterward.  But its renovation was not so glamorous as the private homes.  Painted beige, there was nothing especially pleasing about the building; and by the last half of the century it was a sort of eyesore along the picturesque block.

Then, on October 17, 1993 New York Times journalist Tracie Razhon wrote "change is coming for one of Greenwich Village's most tranquil and historic enclaves...four buildings, which border a private garden mews, have offers from young architects and other professionals that have been accepted by a family that has owned them for decades."

Included in the group was the nearly vacant converted factory.  Razhon said "There is one rent-controlled tenant, who lives in half of the downstairs.  The prospective buyer is a young architect."

Scott Newman created an entry stoop and period-appropriate iron railings, removed the paint and redesigned the interiors.  The renovations resulted in a two-family residence. 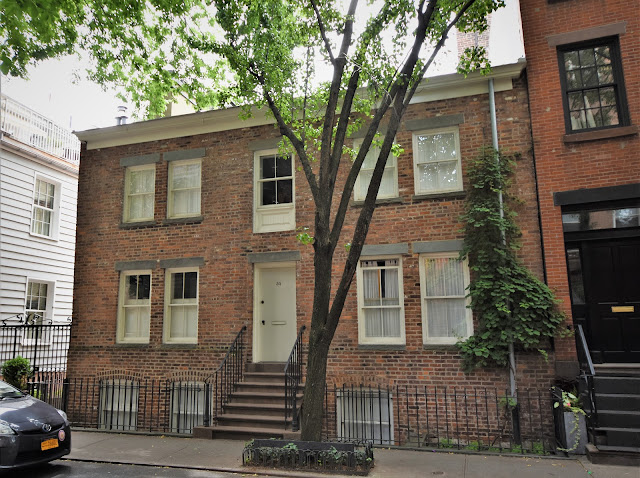 Long the ugly duckling of the block, it is now an appealing piece of what Razhon called "one of Greenwich Village's most tranquil and historic enclaves."