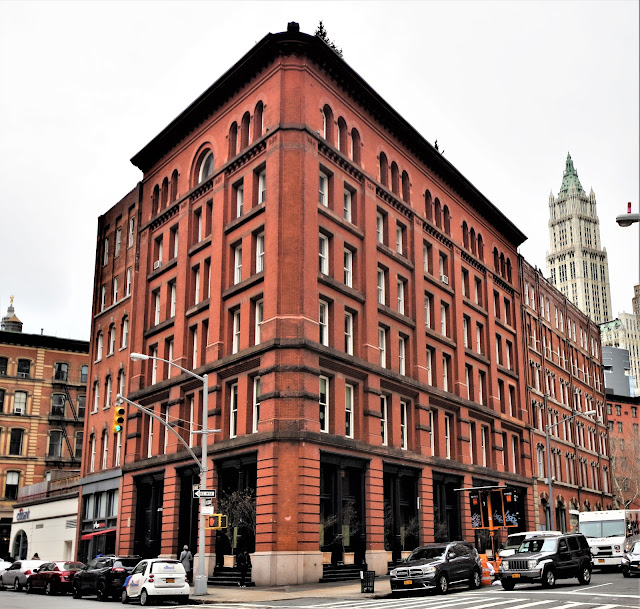 Margaret C. Wallace was a minor real estate operator in Tribeca in the 1880's; one whose name would be largely lost were it not for a diaster.   In the spring of 1889 she purchased the brick building at No. 162 Duane Street from the Joshua Jones estate for $45,000.  She already owned the similar adjoining building, No. 160.  The properties stretched back along Hudson Street nearly 100 feet.

The following day The Sun reported "Two floors full of butter and cheese, and a miscellaneous assortment of goods (including many boxes of candles) on another floor, furnished illumination for the neighborhood of West Broadway and Duane street for several hours last night."  The article noted "The building is of brick and runs through the triangular block to 22 Hudson street."

"The fire extended to the third and fifth floors," said the newspaper.  "To the danger of smoke and flame was added the fear that the fire would reach the second floor, filled with grocers' drugs, explode them and blow out the front of the building."  It took three hours to extinguish the fierce blaze, which resulted in one fire fighter being taken to a hospital.

Margaret Wallace commissioned the well-known architect Samuel A. Warner to replace both structures with a modern loft and store building.  Two months after the disastrous fire, on January 23, 1891, he filed plans for a six-story "brick and stone warehouse" at a cost of $75,000, just over $2 million today.

The dusty, noisy construction seems to have caused a problem for thirsty horses.  On March 24, 1891 the Board of Alderman approved Herman Wunderlich's request "to remove the watering-trough from its present location, No. 28 Hudson street, to No. 27 Hudson street, directly opposite."

Completed before the end of the year, Warner's handsome Romanesque Revival structure featured expansive cast iron storefronts within banded brick piers.  Brawny stone bandcourses of the second floor contrasted with the red brick.  Triple arcades graced the top floor above a corbeled cornice; the central opening on the Duane Street front taking the form of a single large arch. 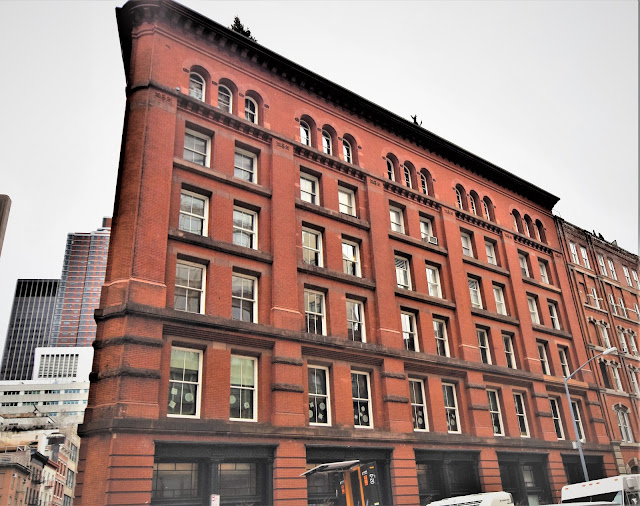 Interestingly, while the immediate neighborhood was the center of the butter-and-egg district--home to wholesale produce and dairy merchants--the new building filled with a much different type of tenant.

Foote, Pierson & Company was among the initial tenants.  The firm was a pioneer in the manufacture of fire alarm and telegraph equipment.   It was joined by the Carleton Chase Electrical Co. and the Bechton, Dickinson & Co., both manufacturers of "physicians' specialties."

In the early years of the 20th century elevators provided increased efficiency and convenience.  But they were dangerous, often designed without doors or gates to prevent limbs being caught or unwary persons being plummeted down the shaft.  William Luther became a statistic in the "Certified List of Elevator Killings in the Borough of Manhattan" when he was killed in a fall down the shaft here in 1911.

In 1914 Foote, Pierson & Company introduced the Sharpe-Millar photometer.  On July 11 the Real Estate Record & Guide praised the invention, which measured the intensity of electric lighting.  "It is easy enough to point to a meter and say that the lighting bill is in strict accordance with the reading of the instrument, but it is not so easy to prove that the tenant's complaint that the quality of light he got was below normal is without grounds."  The 10-inch long instrument measured the amount of light indoors or out, and "serves as a check on errors under all circumstances."

Judge Charles M. Hough of the United States District Court dismissed the case on November 18, 1915, citing national defense needs.  "In times of trouble, at periods when the arm of the Government is in need of strengthening, the Executive may be left in the exercise of powers perhaps doubtful in law but temporarily necessary for national safety."

It was a temporary victory for Emil J. Simon, however.  Hough gave Marconi Wireless Telegraph 20 days to refile a complaint for infringements "not arising from Government contracts."

Foote, Pierson & Co. received a notable contract as well when the New York Fire Department purchased 300 fire alarm boxes on April 12, 1916 for $19,500 (about half a million in today's dollars).  The red-painted cast iron boxes would become a common fixture on New York City streets.

The firm unexpectedly moved from radio and electronics products to furniture in 1930 when it applied for a patent furniture "shoe."  The invention allowed a work table leg to pivot to a slanted position.


Another radio firm leased space by the mid-1930's.  Gillette Radio Corp. hawked its "high fidelity advanced design" electric amplifier in Radio-Craft magazine in June 1936.  The advertisement boasted that the $15.75 amplifier had a "built-in multi-tap output transformer" and "built-in acoustic compensator."  In small print it added "less tubes and speakers."

Major change in the Duane Street neighborhood was evidenced on October 18, 1981 when The New York Times food editor Craig Claiborne reported on "movable feasts" available at 162 Duane Street.  "A brand new food store in Tribeca which serves appealing homemade salads and pates made with good fresh ingredients.  Each picnic has a title."

Six years later Ann Nickinson and her partner Carrie Levin opened another gourmet boutique, Good Enough to Eat.  Their original store debuted on Amsterdam Avenue in 1982.   Now, in 1987, they spent $200,000 to renovate space at No. 162 Duane for a larger 65-seat shop.  The Times said it "specializes in homey fare such as soups, stews, muffins and meat loafs."

On April 1997, famed restaurateur David Bouley and his partner Warner LeRoy announced their intentions of opening a Viennese restaurant, Danube, in the space. 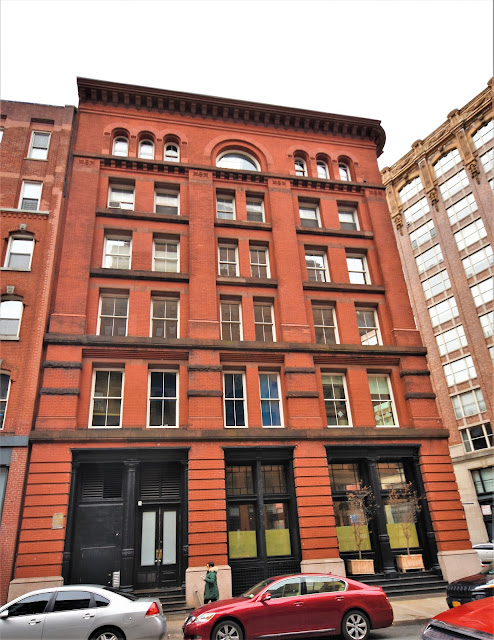 The Tribeca renaissance  had taken over the entire building in 1991 when the upper floors were converted to apartments.