In May 1903 brothers Moses and Berman Ehrenreich resold the two 1872 brownstones at 868 and 886 Lexington Avenue, at the northwest corner of 65th Street, to another pair of real estate-dealing brothers, Michael V. B. and John W. A. Davis.   The Ehrenreichs had owned the properties for just over a year.

The transaction was the first step in a process that would remarkably transform the corner.  The Davises demolished the old rowhouses and commissioned architect Edwin Outwater to replace them with a massive neo-Federal style mansion.  Completed the following year it was an impressive 70-feet wide and ran 40 feet back along Lexington Avenue.  At a glance it could as easily have been a school or civic building as a private home.

Interestingly, the Davises apparently always intended the mansion as a rental property.  The original occupants were the Samuel F. Barger family.   A descendant of one of the early Dutch families in New York, he had became a director of Cornelius Vanderbilt's New York Central Railway in 1869.  Despite his age--he was 72 when he moved into the house--he remained in that position, as well as holding directorships in several other railroads.

No. 135 East 65th Street was not officially Barger's permanent address.  He had purchased the striking Shingle-style Isaac Bell house in Newport more than a decade earlier and transferred his residency there in October 1898.  The New York Times explained at the time, "Mr. Barger is taxed for $30,000 in real estate in this city."

Barger's wife, the former Edna Jenie LaFavor, had died there on June 22, 1901.  Moving into the 65th Street mansion with him now was his son, Milton and daughter, Edna.  Another daughter, Maud, was already married.  (Like her brother, Maud Barger-Wallach was known on the Newport tennis courts.  In 1908 she became U.S. Open champion.)

Milton had graduated from college in 1898 and now he, too, was involved with the New York and Harlem Railroad Company, serving as its treasurer.  It was likely through no small influence of his father that he held the same office with some half-dozen other railroads.

A disturbing incident occurred in the Barger cottage in Newport in September 1910.  Money was found missing, including cash that belonged to a servant.  Further investigation revealed that funds raised by Maud for the Italian Children's Mission in New York was also gone.  Police were called in and two servants were fired under suspicion.

On September 15 a local newspaper reported "On Tuesday one of the discharged servants attempted suicide by drinking chloroform liniment on the lawn of Mrs. Paran Stevens's estate late at night, and was saved by a policeman."

Carmilla Barger contracted ptomaine poisoning in the spring of 1911.  She died in the house on May 17, after only five years of marriage.

Samuel F. Barger renewed his lease on the mansion in July 1913.  Less than a year later, on April 7, 1914, he died in the house at the age of 82.  Railway Age Gazette pointed out "Mr. Barger had been in failing health since his retirement from active business eight years ago."

Milton and his sister remained in the mansion until May 1916, when John W. A. Davis leased it to Copley Amory.  Like Barger, No. 135 was not his official address.  Newspapers routinely added "of Boston" to his name.  Born on June 3, 1866, he had graduated from Harvard in 1888.  He and his wife, the former Mary Forbes Russell, had six children: John, Copley, Jr., Henry, Walter, Thomas, and Katherine.

With the outbreak of war in Europe, four of the Amory boys left home to do their parts.  Copley went to France to work for the Government; John joined the Army, first attending the Plattsburg Training Camp and then going to Camp Wadsworth in Spartanburg, South Carolina for training; while Walter joined the Royal Flying Corps of the British Army.

Before heading overseas Walter took care of one last piece of business.  On April 7, 1918 The Sun announced his engagement to Helen Elizabeth Outerbridge.

The Copley summer estate was in Walpole, Massachusetts.  When the family closed the East 65th Street mansion in June 1918 for the season, the New-York Tribune noted "Conspicuous in a window on the first floor is a service flag bearing four stars."   A month later, on July 26, The Evening World reported distressing news.

"Private John G. [sic] Amory, whose address is given as No. 135 East Sixty-fifth Street, is the only New York City man listed as missing in action to-day."  Nothing more was heard of him until February 21, 1919 when he appeared on the Army's list of "wounded severely."

That year the Amorys stopped using the 65th Street mansion during the winter seasons, leasing it first to Cornelius N. Bliss, Jr. and his wife.  The following year Major James Imbrie rented it for the season, spending $12,000, or around $170,000 today.  In reporting the deal The Sun noted "This is one of the finest houses in this section, with a beautiful colonial exterior."   The following season it was rented by Hunter Marston.  The New York Herald mentioned that the house was "beautifully furnished."

By now nearly all the houses along Lexington Avenue had all been converted for business.  Their stoops had long been removed and show windows exhibited gowns, jewelry or artwork.  In 1923 the Amory family was gone for good and architect Samuel Cohen was commissioned to carve stores into the ground floor and "bachelor apartments" in the upper floors.

Interestingly, the men renting apartments in the building were nearly all doctors, many of whom practiced from their spaces.  In 1926 Dr. Henry T. Chickering, known for developing a tuberculosis serum, opened his office here, Dr. Russell H. Patteson was in the building by 1928 when his engagement to debutante Virginia Ann Fox was announced, and well-known physician Stuart L. Craig was here by the early 1930's.  Once they established their offices here, few of the doctors seemed to leave.

In June 1937 Dr. Craig operated on John D. Rockefeller III for the removal of his tonsils and adenoids.  The surgery was pronounced "successful."

On April 4, 1955 Governor W. Averell Harriman was scheduled to receive a model of the Berlin Freeman Bell in his home at No. 16 East 81st Street.  That did not work out because Harriman wanted to visit Dr. Craig about a sore throat.  So the ceremonies were moved.

The New York Times reported "Dr. Hans Hirschfeld, public affairs director of West Berlin's governing body, the Senate, made the presentation in the lobby of a building at 135 East Sixty-fifth Street, where the Governor's physician has an office."

On July 26, 1956 the Swedish liner Stockholm collided with the Italian ship Andrea Doria, resulting in the Andrea Doria's sinking.  The Federal trial of Captain Gunnar Nodenson of the Stockholm in downtown Manhattan was to began in November.  But during pre-trial proceedings, Nodenson fell ill.

After a week's absence, the Italian Line's attorney demanded on November 1 that the captain be brought to the courthouse.  The international incident now suddenly hinged on the opinion of a cardiologist whose offices were in the former Barger mansion.

The New York Times reported "Dr. Joseph Hajek of 135 East Sixty-fifth Street, submitted an affidavit Monday that the captain could not return to the stand for another ten days.  Dr. Hajek reported that a cerebral spasm the captain had suffered had not subsided and there was possibility of cerebral thrombosis (blood clot)."

Dr. Hajek was born in Prague and had come to New York shortly after graduating from the Imperial Military Academy of Vienna in 1912.  He had been associated with St. Luke's Hospital since 1918.  He was still practicing from No. 135 East 65th Street when he died at the age of 72 in 1962.

Over the years the ground floor shops were home to a variety of upscale businesses, including the exclusive Pini di San Miniato, Ltd. in the early 1960's; the Putumayo boutique in the 1980's; and the restaurant Barbalùc, which was opened by former Le Cirque chef, Christian Fantoni in March 2003. 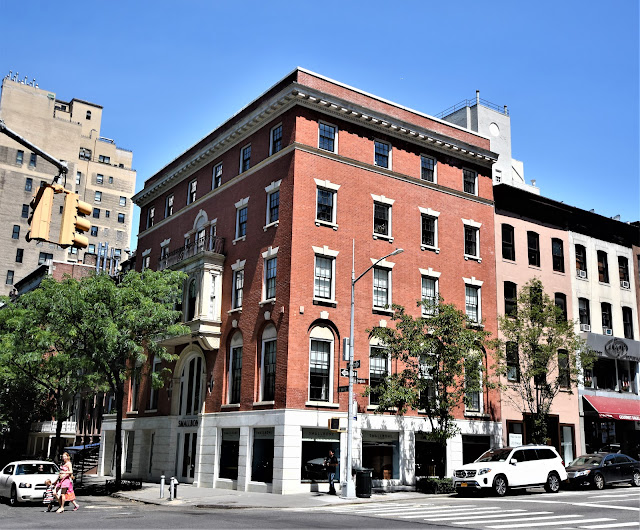 Around 2007 Smallbone moved its kitchen furniture showroom into the ground floor.  The remodeled storefront features polished marble surrounding the expansive show windows.  Passing by today it is easy to overlook the fact that the building was one of Manhattan's most impressive mansions in the first half of the last century.