The intersection of Fifth Avenue and 14th Street, in 1854, epitomized wealth and social status; so much so that an article in The New York Times on July 15 that year said the neighborhood residents "live like Emperors."  At the northwest corner stood the mansion of William M. Halstead, a stately Greek Revival structure of red brick and stone.

Halstead's patrician residence engulfed several building lots and included an ample side garden.  The wide stone stoop led to an impressive entrance, its doorway recessed behind free-standing Ionic columns.  A cast iron balcony fronted the floor-to-ceiling parlor windows on the Fifth Avenue side, wrapping around the corner to include a 14th Street bay.  A solid brick parapet crowned the cornice.

William M. Halstead amassed his fortune through Halstead, Haines & Co., a long-established dry goods firm.  He and his wife had six children.  As they married he built them upscale homes, three of which abutted the family mansion along Fifth Avenue.  Directly behind No. 1 West 14th Street was the home of daughter Mrs. John Kirtland Meyers; next to her lived William M. Halstead, Jr. and his wife, the former Magdelea Ricter; followed by Dr. Thaddeus M. Halstead.   (Confusingly, the Halsteads had two sons named William.  William S. Halstead went on to became a famous surgeon at Johns Hopkins Hospital.)

The exclusive nature of the neighborhood was evidenced in Halstead's $19,500 property tax in 1857--about $565,000 today.  But by his death around 1872 much had changed.  Millionaires were moving northward and businesses were taking over or replacing their mansions.  It did not take long for the handsome Halstead mansion to suffer humiliation.

Showman James Meade acquired the house and converted it to Meade's Midget Hall.  The entrance was moved to Fifth Avenue and a fourth story in the form of a mansard was added.  The alterations did not offend the private homes that still remained--however his operation inside very well might have.

Meade's Midget Hall opened in November 1877 with offerings that could only be viewed as abhorrent today.  Meade offered just two entertainments--exhibitions of midgets and baby contests.

On November 26 that year the Brooklyn Daily Eagle wrote "At Ten o'clock this morning the great national Baby Show at Midget Hall, corner of Fourteenth Street and Fifth Avenue, New York, was opened.  There are four hundred babies entered, and about half that number were in their places this morning.  The show occupies two floors of the building, and around the sides of the rooms, on raised platforms, are the babies, with their mothers or nurses.  At least one hundred and eighty of the two hundred babies spent the greater portion of the morning crying."

Meade seduced women into putting their babies on display by offering prizes of $10 to $150, "the highest prize being given to the handsomest mother and child."  The Brooklyn Daily Eagle was both biting and racist, saying:

The mothers, with the exception of two, are not handsome...The majority of the mothers are German, and among the Germans there are a fair sprinkling of Hebrews.  There are also Russian babies, Icelandic babies, Polish babies, Norwegian babies, English Babies, Irish babies and one Chinese infant named Wee Boo.  Many of the infants are positively hideous looking, yet their fond mothers think their offspring the handsomest in the show.  There is one baby that resembles a monkey and another with long ears and jaw, that is called the dog baby.  The dog baby barks when it wants food.

The New York Times chimed in with its own insensitive remarks.  One "set of triplets are very small--so small that all three of them might take a nap on a pillow, and leave plenty of room besides for three little bottles and a supply of tin rattles.  They are orphans-in-law, their mother having died when they were born."

A Barnum-like marketer, Meade hired midgets General Frank Mite and Minnie Obom to judge the babies.  The Times reported that Mite "was very much interested in the little ones, frequently wanting them to be held up by his side to measure their relative heights.  Miss Minnie surveyed the show in dignified silence, flirting the trail of her silk dress about with all the grace of a belle."

Within the year New Yorkers became bored with baby and midget shows.  The former Halstead mansion was leased to M. A. Frisbie and Alexander Reed who converted it to Brewster Hall where a wider variety of exhibitions were presented.  Among the most popular were the speed walkers.

On February 14, 1879 The New York Times reported "In Brewster Hall, at Fourteenth-street and Fifth-avenue, Annie Bantell and Lulu Loomer are walking quarter miles in quarter hours."  The newspaper was no less insensitive in describing the walkers than the babies.  "Annie Bartell is as broad-shouldered as a man, strong and muscular, and walks with a firm tread.  She is dressed in a showy black velvet bodice, heavily trimmed with blue silk; flys several blue ribbons in her hair, and wears a bright little bouquet in what would be the upper part of her vest, if she were a man."

A month later Fannie Edwards was engaged in what The Times called an "absurd feat of feminine endurance;" an attempt to cover "3,000 quarter miles in 3,000 quarter hours."  But there was a problem.  On Monday, March 24 the newspaper reported "A damper was put upon the ardor of the female pedestrians who are walking in Brewster Hall."   Two nights earlier Police Captain Williams had ordered the managers to close up promptly at midnight.  The Times said "there was to be no desecration of the Sabbath."

Williams told reporters "There are only two places in the precinct where the walking business is going on, and there won't be any walking done in either of them any more on Sunday while I am here."

Brewster Hall, like Midget Hall, struggled financially despite its desperate attempts to draw patrons (including reintroducing baby shows).  On May 28, 1879 The Times remarked that after the walking matches, "the double-headed girl and one or two celebrities and monstrosities were placed on exhibition.  They did not 'draw' well."

The ground floor exhibition space was divided into stores.  In June 1880 Brentano's Monthly reported on the opening of Wentworth Rollin's bicycle store here, noting "Mr. Rollins is one of the most noted of American long-distance bicyclists."   There was also a lunch counter, a bar, and a liquor store.

The second floor was converted to the Old Guard Armory, the third floor to the factory of trimmings manufacturer Deutsch, Shottick & Deutsch, and Ivan & Mossmann's factory for making cornices and moldings was on the top floor.

The Old Guard was perhaps the city's most venerated military organization, formed in 1826 as the Tompkins Blues.  Over the decades it had served as honor guard at the funeral of President James Monroe and traditionally was present in all Gubernatorial and Mayoral events, such as inaugurations.  The rooms were elegantly decorated and a valuable collection of artwork a military memorabilia was housed here.

A fire broke out on November 7, 1881 which gutted the third floor and damaged the mansard.  While the blaze did not reach the Old Guard Armory, it suffered water damage.  The New York Times confirmed "The well-known oil painting of the Arctic rescuing a crew at sea was not damaged.  Slight damage was done to the uniforms and arms in the closets and racks."

The building was repaired and new firms moved in while the Old Guard remained in place and expanded into the third floor.  On December 2, 1885 The Times reported on a meeting during which two new oil paintings "of old commanders from the Seventy-first Regiment" were presented.

On October 24, 1886 the same newspaper described the rooms of the Old Guard, which it called "one of the coziest and most attractive clubrooms in this city."  The article noted "The [second] floor is divided into a drill room and a parlor.  The drill room, with a locker for each member, is ornamented with an interesting collection of old prints and pictures."

One of the most cherished relics was the the Old Guard's punch bowl, once owned by Major William T. McClean.  "The bowl, which is of mammoth proportions, was presented to the corps 'years and years' ago, and there is a private receipt for brewing the Major's punch."  The article noted that among those who had drunk from the bowl were DeWitt Clinton, Marquis de Lafayette, Andrew Jackson, Sam Houston, Henry, Clay, Daniel Webster, Martin Van Buren and Stephen A. Douglas among many others.

Fire broke out again on August 30, 1893.  This time the Old Guard was not so lucky.  The Engineering Record said the space was "gutted" and placed the total damages at $85,000--nearly $2.4 million today.   The New York Times said the fire's "worst deed" was "the burning out of the Old Guard Armory...with all its priceless historical pictures, relics and trophies."

Other tenants in the building were the Fifth Avenue Furniture and Carpet Company on the ground floor; the Celluloid Piano Key Company; and W. S. Budworth, "furniture storer and picture packer," on the top floor.  The newspaper said the damages to the Old Guard Armory were "impossible to estimate" due to the irreplaceable artworks and artifacts.

This time the Old Guard Armory did not return.  But the building was once again repaired and became home to a furniture and carpeting retailer.

On January 25, 1902 the Real Estate Record & Guide reported that "The tenants now in the building have been notified to vacate on February 1."  Two months later, on May 3, American Architect and Architecture explained in its "Building Intelligence" column that developer Henry Corn would erect a $500,000, 11-story office building on the site, designed by Robert Maynicke.  It was the final chapter in a long and varied history that started with one of Manhattan's stateliest homes. 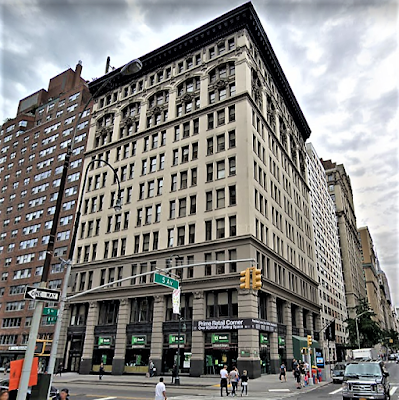