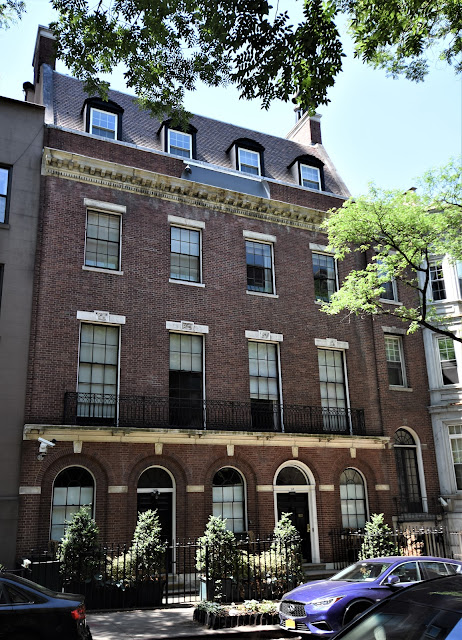 In 1924 banker Adrian Iselin purchased the two 19th century brownstones at Nos. 144 and 146 East 65th Street through the Adlin Corporation, of which he was head.  Before the year was out the old houses were gone, replaced by a double-wide Colonial Revival mansion.

Designed by the architectural firm of Treanor & Fatio, it was faced in red brick and rose four stories.   The main entrance and service door slipped in among the arched openings of the ground floor to create a dignified arcade.   A full-width balconette fronted the tall windows of the second floor and a high mansard with four dormers sat above the stone cornice.

It became home to Iselin's son, Ernest, his wife the former Pauline Whittier, and their two children, Ernest, Jr. and Louise.  Six servants lived on the upper floors.  The extended Iselin family had been prominent in Manhattan society for decades.

Ernest Iselin was a partner with his father in the brokerage firm A. Iselin & Co. and an officer or director in a dozen other corporations.  Pauline was born in Boston and was educated in private schools and in Europe.  She could trace her American roots to Thomas Whittier who settled in Newbury, Massachusetts in 1638.

The family had barely moved into their 65th Street mansion when Iselin became part of a world-wide controversy.  In December 1924 Grand Duchess Victoria Feodorovna, wife of Grand Duke Cyril arrived in New York.  The Duke had proclaimed himself Tsar of Russia and New York's Russian community treated its visitor as a head of state.

The London Daily Telegraph reported that the Grand Duchess was received "with Royal honours," and that "'Hail to the Tsar' was played by the orchestra from a neighbouring Russian restaurant at a reception given for the Grand Duchess at the Plaza Hotel."

But The West Australian noted three months later that Iselin threw a wrench into the jubilation.  "The previous day Mr. Ernest Iselin, a New York banker, had disclosed a letter sent him by his brother-in-law, a native Russian."  The letter was a copy of one written to Grand Duke Nicholas Nicholaievitch, the oldest member of the Romanov family, from the Dowager Empress (the mother of the assassinated Tsar Nicholas).   It revealed her "strong criticism" of Duke Cyril who, according to the newspaper, "had sought vainly to win the approval" of the family for his assumption to the throne.

Through her lady-in-waiting, Madame Helen Orloff, the Grand Duchess dismissed Iselin's letter as "false and misleading." 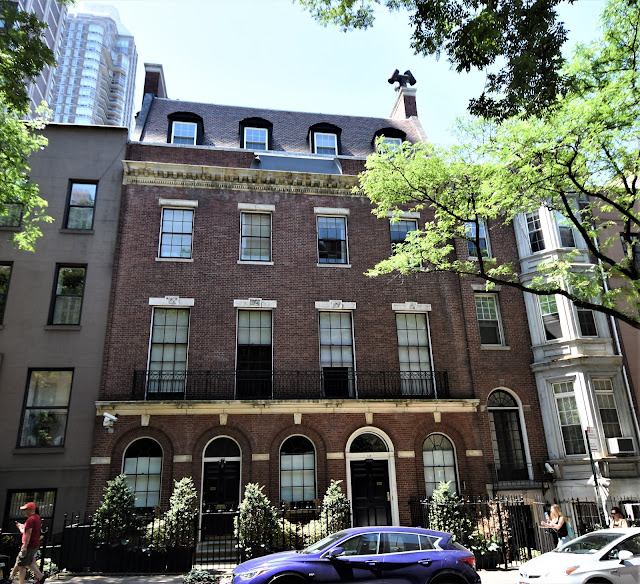 A less controversial brush with nobility came about in 1929.  On September 18 that year the Iselins announced the engagement of Louise to Count Leonardo Marcati, the son of Count Alexandro Marcati of Greece.  The romantic match caused excitement within society and The New York Times deemed the engagement "of more than usual interest," saying it "links members of prominent families of this country and Europe."  The marriage, however, would not come to pass.

About a month later a man began showing up at the Iselin's door.  On each occasion the maid rebuffed him.  William White was insistent that Pauline was his long lost mother.

On Saturday night, December 7 Pauline was hosting a bridge party and, just after midnight, Ernest took the dog "for an airing in the park."  The 30-year old White had apparently been watching the house and with Ernest out of the way, he went to the door and insisted on seeing Pauline.  Somehow he managed to get by the maid and burst into the room where, according to The New York Times, "he threw the card party into turmoil."

Cool minds prevailed and White was quieted while a patrolman was summoned.  Several days later the newspaper following up on the story, saying White had been sent to Bellevue Hospital for "ten days' observation."

Pauline's entertainments most often centered on philanthropic causes. In 1933 she founded the Generosity Thrift Shop on Third Avenue.  It became her passion.  The proceeds of the shop aided a variety of organizations, including the Tuberculosis Auxiliary, the Post-Graduate Hospital Social Service, and the New York Exchange for Women's Work, and many others.  She went to the shop nearly every day and often personally attended to customers.

On January 23, 1938 Louise's parents announced her engagement to Wadsworth R. Lewis.  The well-connected Lewis was a member of several country clubs.  But something went awry with this romance, as well.

Meetings of the board of directors of the Generosity Thrift Shop were routinely held in the Iselin home.  Pauline tirelessly organized and directed an annual fashion show, normally held at the Waldorf-Astoria, to benefit the shop.  The Times noted at one point "These exhibitions, which always drew a large attendance from society, were more thorough and elaborate than all but  very few of their type."

Seemingly unlucky in love, Louise became engaged to Augustus K. Mills in February 1942.   This time it stuck.  The wedding took place in the nearby Church of St. Vincent Ferrer on Park Avenue on February 11, following by a reception in the Iselin home.

On February 28, 1946 Pauline Iselin fell ill.  Three days later she died at the age of 69.  At the time, Ernest Jr. was a naval attaché serving in Belgrade.

Ernest Iselin remained in the 65th Street house for just over two years, selling it in April 1948 to David Rockefeller.  In reporting on the sale, The New York Times called the property "One of the finest town houses on the East Side" and noted it "will be altered from plans by Mott B. Schmidt, architect."

Schmidt (who was especially known for his neo-Georgian designs and who was highly responsible for the architectural personality of Sutton Place) did not tamper with Treanor & Fatio's facade, apparently focusing on interior details.   When the Rockefellers moved in there were eight family bedrooms, and six staff bedrooms.  In the basement were two vaults--one for wine, the other for valuables.

David Rockefeller was the grandson of John D. Rockefeller, America's first billionaire.  The chairman of Chase Manhattan Bank and and of the Museum of Modern Art, co-founded by his mother, Abby Aldrich Rockefeller, in 1929.  Born on June 12, 1915, he had grown up in the largest private house in the city at the time, No. 10 West 54th Street.

Rockefeller and his wife, the former Margaret McGrath, were married in 1940 and would have six children.  Margaret would be as visible in philanthropic and social circles as her husband, working on behalf of the New York Botanical Garden and the New York Philharmonic, for instance.  She made substantial contributions to Lincoln Center for the Performing Arts, becoming a trustee in 1953. 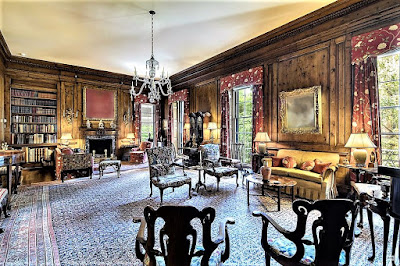 The family maintained a 107-room summer cottage at Seal Harbor, Maine, and an estate in Pocantico Hills, near Tarrytown, New York.  Both David and Margaret (known as Peggy) were avid yachtsmen and horseback riders.

In 1951 Rockefeller was a member of the Westchester County Planning Commission, formed to further civic, business and cultural development in Westchester.  It was most likely a trip associated with that project that earned him a speeding ticket in August that year.  He was fined $10 in Bronx Traffic Court.

Rather unexpectedly, in the mid-1970's Peggy took a shine to cattle.  She began to buy and raise the animals first on Barlett Island in Maine, near Seal Harbor; and then at Pocantico.  No longer a hobby, the venture grew when the Rockefellers purchased four farms in Columbia County, New York, in 1980.  The refined and cultured Peggy became what The Times called "an accomplished farmer." raising purebred Simmental cattle.

In the meantime, like all Rockefellers, David and Peggy collected art.  The 65th Street house and David's Rockefeller Center offices filled with some 1,500 artworks.  Hanging in the house were modern works by the likes of Matisse, Cezanne, Gauguin, and Picasso; as well as Asian and European porcelains.  Much of the furniture dated from the 18th century.

Peggy died at the age of 80 on March 26, 1996.  Her long list of accomplishments and philanthropies included her co-founding the American Farmland Trust and the Maine Coast Heritage Trust.  David survived to the age of 101, dying at Ponantico Hills on March 19, 2017.

Thee months later the mansion that had been home to only two families was put on the market for $32.5 million.  The art collection sold at auction in 2018, bringing in $832.6 million.  The house sold in April 2018 for $20 million.